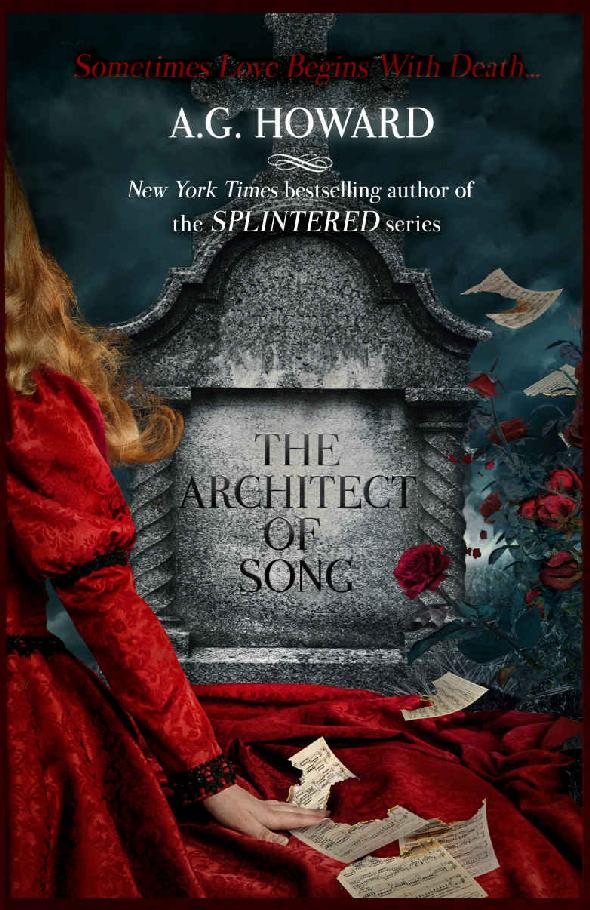 The Architect of Song

To my two moms:

One of you brought me into this world and had to leave too soon. The other welcomed me into her family and treats me as her own.

Thank you both for believing in me, supporting me, and showing me the strength of a mother’s love.

Architecture, in general, is frozen music.

A silent mouth is melodious.
An Irish Proverb

Melancholy. Melody. Separate words, separate meanings, united by a memory pressed upon my heart. In my childhood, my mama sang to me. In her gardens, in the midst of fragrant foxgloves and hollyhocks taller than my five-year-old head, her voice took wing—a sound more lovely than a nightingale, more moving than a storm-crested sea. At times, the tune would break with sorrow or poignant happiness, and her tears would flow. I treasured nothing more than the melancholy melody of those fractured notes.

Now that I am deaf, I’m haunted by two regrets: that I didn’t memorize the sound of Mama’s precious voice … and the eternal absence of song in my soul.

During my mama’s final days in this world, I read aloud from her book of assorted proverbs to comfort her.

She used to say each important scene of our lives could be summed up by a proverb. Yet I found none that captured the pain of her body taken by consumption. For three months I watched, helpless, as winter settled in her blood and froze her from the inside out. Even at age nineteen, my heart suffered as that of a child.

“Juliet, my sweet China Rose …” Her lips formed my nickname often toward the end, and I ached to hear her say it one last time. To really
hear
her.

In some ways, my impairment softened the torment, her coughs and whimpers falling on incapable ears. Still, my other senses gave no such reprieve. I felt her cries when her withered hand seized my fingers for anchor; my nostrils stung from the pungent mint oils slathered across her chest and throat in hopes to aid her labored breath; and I could never un-see the pale cloud of sickness dimming those beloved eyes, once filled with color and light.

Well-meaning friends visited during her last hours. I envied them the ability to hear her words as opposed to reading her lips. I brooded, composing songs of self-pity in my mind. If our guests had but stopped to listen, they would have heard.

Silence has a melody all its own.

After her death, people came in droves to attend the funeral. Mama was beloved by many. Papa’s only brother, Uncle Owen, and my and Mama’s live-in maid, Enya Alderdice, accompanied me in the carriage that followed the covered equipage hearse. My attire from head to toe matched the horses’ ebony coats.

Arranged on a hill, the cemetery’s headstones appeared small and insignificant in the late afternoon light—like an overgrowth of stony mushrooms bursting from the brown and yellow landscape. I shivered beneath my veiled cap and fur blanket as the carriage swayed on the gales of a north wind bearing ice and sleet. The scene chilled me—such a cruel foil to sweeter times when I would dance with Mama during warm spring showers, our bodies tingling with laughter and song.

The rain softened upon our arrival, easing the trek for the pall bearers who laid Mama’s casket within the ground. Uncle Owen cradled one of my gloved hands. In the other, I clasped the silver locket which held my parent’s portraits … memories weighing heavier on my shoulders than the clouds draped across Cemetery Hill.

I lifted my veil to watch the priest’s lips give a benediction.

At the age of eight, a severe case of mumps cost me my hearing, as well as my papa’s life, for I gave him my illness. Uncle Owen, not only Papa’s brother, but his partner and friend, stepped up to carry the family business and offered a lifeline to Mama and me. For eleven years thereafter, both of them supported me in living a lie. Never once did they force me to acknowledge my deafness to strangers. Instead, they showed me how to mask my differences, by using my other senses to compensate.

Unlike children born with a hearing defect, I had already mastered speech and could yield responses. The hardest feat was controlling the volume of my voice, but I soon learned to adjust the tension on my vocal cords. Mama told me I often spoke too quiet. Yet to be soft-spoken was considered a virtue for a lady, so strangers simply believed me well-mannered and refined.

Those strangers underestimated me, for I was putting each and every one of them upon the slide of a microscope. I honed the art of reading lips and facial expressions, and learned how often they contradicted one another. There had been scales covering my eyes that lifted away upon the absence of my ears, and I came to see the underlying truth behind every spoken word. In that respect, my “limitation” proved to be a gift. One I preferred to keep safely secreted within until I deemed it safe to reveal it.

My greatest defense against a silent and stoic world.

A cold droplet of rain splattered on my nose as everyone’s eyes closed in prayer. I used the pause to search within the folds of my pelisse overcoat for a China rose—the apricot-pink of a summer sunset—to set upon Mama’s grave.

I aimed a sidelong glance in Uncle’s direction, waiting for his cue to place it. I resisted the urge to lean against him. To draw strength from him. I knew that today, he needed me to be strong on my own.

Even at thirty-seven, he retained a distinguished appearance, almost eagle-like. His large, golden-hazel eyes, wise with noble insight, his fair skin smooth with a hint of distinguished wrinkles, his prematurely white hair, wavy and thick beneath his cap like a nest of downy feathers. He looked more like my handsome papa with each year.

My attention fell to the weather-worn tombstone at the other side of my feet.
Lord Anston Emerline: Loving father and husband.

A middle-class baronet, a dyer of fabrics and cloth. A doting father, cut-down by his daughter’s childhood illness.

Adrift on memories, I didn’t realize the prayer had ended until Uncle nudged me. I kissed the rose and tucked its stem into the slight opening where the ground met the base of her tombstone—in hopes to hold the blossom from blowing away in the storm. My gloved fingers traced her inscription,
Lady Emilia Emerline: Beloved wife, mother, and friend
. There was a catch in my throat that grew to a sob. I feared how loud it was when the faces around me looked on with pity. Uncle knelt beside me, arm draped over my shoulders, his body trembling alongside mine.

After some minutes, he tenderly blotted my cheeks with a handkerchief, followed by his own, then stood. While he dusted off his breeches, I plucked two petals from Mama’s rosebud. One, I carried to Papa, stuffing it into the cracked facade of his aged stone. The other, I eased into the band of my glove, the petal cool against my palm as I slid it in—an attempt to bind the three of us together for the long and lonely night ahead.

The grave diggers began the task of sludging mud atop Mama’s casket. Grief burned within my chest, and I turned my back as Uncle bid the mourners goodbye. They scattered to their carriages, black and gray cloaks gleaming like rotted leaves driven to the gutters.

I inhaled a cleansing breath as the last hackney-drawn coach pulled out onto the road. I was relieved that we were at last alone. A certain viscount had been vying for my family’s estate the past few months. I’d refused to personally meet him, and had worried he might make an appearance at the burial today, to stake his claim when I was at my most vulnerable. My home was not for sale, regardless that he’d raised his bid to three times its worth.

All along, Uncle had been encouraging me to consider the offer. “
An unmarried maiden has no use for two acres of land and a townhouse with six bedrooms.”
Even without working ears, I felt the bite of those well-intended words. That house was the only tangible piece of my father and mother still standing. Papa built it for her with his own hands, and Mama decorated each room for him with love. And I would never be parted from it.

As if hearing my thoughts, Uncle clasped my elbow. “Ready to go home?” he mouthed the question and I glanced at Enya waiting beside the carriage, studying her boots. Pink patches stained her pale skin where she’d blotted tears away.

“Not yet.” Eyes stinging, I fiddled with the petal tucked inside my glove and looked at the graves surrounding us, aware of my hypocrisy. I didn’t wish to part with my home. Yet, I had no desire to go there. To stand in the empty rooms once filled with laughter and life. At that moment, I felt as if I belonged with the dead.

Chest rising on a sigh, Uncle observed the heavy clouds overhead. “The weather’s ill-tempered, tiny sparrow.” His lips, glistening with raindrops in the hazy light, framed the words. Sadness and exhaustion tugged his whitening eyebrows. “There is nothing more to do here. Let your mother rest. We will visit again another day.”