Read The Art of Trusting a Greek Billionaire Online

The Art of Trusting a Greek Billionaire 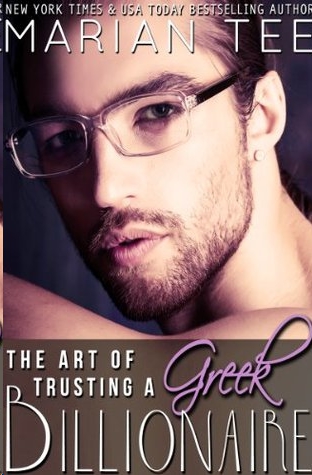 The Art of Trusting a Greek Billionaire (Book 2)

Once upon a time, there was an ordinary girl who grew up listening to bedtime stories where there were no knights in shining armor or Prince Charming. Instead, it had Greek billionaires and this little girl dreamt she’d one day have Her Own Greek Billionaire to live happily ever after with.

When this little girl grew up, she found what she was looking for – but he did not believe in the same bedtime stories.

When she told him she loved him at first sight because he was a Greek billionaire, he did not think she was a hopeless romantic. Instead, he thought she was a gold digger.

This is my story.

I mean your story.

To trust a Greek billionaire, one must not put any stock on what the media says.

She said: Well, not unless it’s CNN.

He said: And you think CNN would be interested in who I’m dating?

She said: Everyone is interested in who you’re dating. Don’t pretend you don’t know it. (Liar).

He said: Clearly, she does not trust me still.

“Cheers to the soon-to-be-married couple!” This was followed by a smattering of applause as the hundreds of guests alternately clapped and raised their champagne flutes for a toast. It was a dazzling affair, as expected for an event attended by Greece’s rich and famous.

A date had been finally selected for the Leventis-Kokinos nuptials, a wedding that would unite two of the most powerful families in Greece. It had thousands of Greek lasses’ hearts breaking, for Damen Leventis had been their pin-up crush since the moment his handsome face, albeit often unsmiling, started showing up on the society pages.

As the noise receded, the silver-haired debonair-looking gentleman on stage spoke on the microphone again. “And now, I present to you once more my lovely granddaughter, who has a surprise to share with all of you.”

The young woman who ascended the stage was lovely and olive-skinned, dressed in a bronze high-waisted silk gown. A reserved smile was on her lips, but her eyes were unreadable. She looked at the taller man behind her grandfather, who immediately claimed his position by her side. He, too, had an unreadable gaze as they looked at each other.

“I know this is very much presumptuous of me, but I would like to present to you, in front of our families and friends, a small token of my deep happiness and the honor and privilege I feel for being your future wife.”

The crowd had completely fallen silent at her words, and on cue, one of the trusted stewards of the Kokinos clan came forward. He handed Alina a small jewelry box, which she in turn opened and presented to her fiancé.

It was a simple platinum ring, beautiful and indubitably expensive. It was also a symbol of the Kokinos’ claim over him, portending the future in which he would be offering his name to a woman…who was not Mairi Tanner.

The name alone ignited memories, all of them something he was not inclined to revisit.

After a moment’s hesitation, not at all perceptible except to several people in the room, namely his family and his intended’s, Damen Leventis took out the ring and put it on his finger.

With this, he would be permanently cutting ties with the young school teacher he desired…still.

The school’s library was nearly empty, unsurprisingly so for it was a Sunday morning and all of the students of the Grecian Academy for Young Ladies were spending the last day of their weekend outside. It was a wonderfully sunny morning, best spent frolicking on the beach or perhaps enjoying a cup of strong Greek coffee in one of the quaintly charming
tavernes.

“You really don’t need to be stuck in here with me,” Mairi insisted. Keeping her gaze on the spines of the books she was scanning, she added, “You don’t have to worry about me killing myself either. I’m over him.”

When neither of her friends answered, Mairi lifted her head and caught Mandy and Velvet exchanging looks.
Sure she is,
their looks said.

“Shut up,” she grumbled.

“We didn’t even say a word,” Velvet said innocently.

“You didn’t have to,” she continued in a grumpy tone.

“Look, we’re just really concerned,” Mandy said soothingly. “It’s been two weeks – he
never
called you, never sent a text message or email, and he’s
still
engaged. We need to accept things as they are. He’s a cheating bastard, end of story. Let’s move on from there.”

Mandy always made things sound so…easy
, Mairi thought morosely. If only she could really do as her friend suggested. She would seriously trade half of her life for it. Anything must be better than this gaping emptiness inside her. But Mairi was also afraid if the emptiness had an end to it, then she’d start hurting – and never stop hurting.

Velvet’s excited voice snapped her out of her thoughts and she unthinkingly hurried to her friend's side. “What is—” She made a face when she realized what Velvet was pointing to – the
newest
Harlequin titles were on the shelves now.

Heart squeezing, she managed to lift her chin and said snippily, “I don’t read those now.”

“Are you suuuuuuuuuure?” Velvet teased.

Mairi put her hands behind her back, just to be sure the temptation wouldn’t get to her. “Yes.”

“But, Mairi…there’s the newest one by
Julia James
…”

Oh, Mandy and her horribly good memor
y, Mairi thought even as she kept her gaze straight ahead, never dipping down to where the books were.

“…and look, a
Greek billionaire
novel by
Lynne Graham
!”

She still wasn’t going to look, Mairi told herself. So her favorite Harlequin author had written another Greek billionaire romance. Big deal. It wasn’t—

Velvet wagged the book in front of Mairi.

Her control broke. “Oh, fine, if you insist!” Mairi grabbed the book.
It really was about another Greek billionaire by Lynne Graham
, she mused wonderingly as she started to walk back towards the counter, where she could check the book out. If she read this, she could pretend she was the heroine and—

“Yeah.” She was red-faced with embarrassment even though she knew no one in school except for her friends were aware of what went on between Mairi and her own Greek billionaire.

As she waited for Carrie to input the book’s details in her library account, her gaze strayed around the newspapers and magazines on display next to the counter. There was one already half open, showing a full-page spread of what seemed like a party—

Her heart stuttered to a stop when she realized what she was looking at. Slowly, she walked towards the newspaper stand, feeling like she was walking the Green Mile as she did.

Mairi picked up the newspaper.

“That’s one of our student’s brothers,” Carrie said helpfully from behind. “Two-thirds of Greece’s female population is heartbroken now because he’s finally picked a date for the wedding. The remaining one-third can’t confess to being sad since they’re all married.”

The photo wasn’t grainy at all like most other black-and-white newspaper photos.
The Leventis money at work,
she thought dully as her eyes glossed past Damen’s face, not wanting to really look at him.

The caption was direct to the point.
Kokinos heiress, presenting Damen Leventis with his own engagement ring, possibly starting a new tradition in Greek high society.

She returned the newspaper to its stand, taking her time because with the way her hands were shaking, she might end up dropping it – or tearing it into pieces.

“I don’t think I’m going to borrow that after all, Carrie,” she heard herself saying faintly.

“I think…I’m in the mood for some Stephen King instead. Or maybe some Romeo and Juliet. Anything where somebody dies please.”

To trust a Greek billionaire, one must remember that he is the type to always go after you.

She said: And most times, it’s to remind a girl that she’s “lucky” to have them.

He said: I am a changed man now, matakia mou. These days, I am willing to wait until you admit it is so.

Damen nodded his thanks to the principal before walking past her, doing his best to keep his stride at a regular pace even though his heart was beating a little faster. He told himself it was just his imagination, but he knew it wasn’t.

No one looking at him would know he was uneasy. Everyone would have thought he was cool and collected, no different from how he typically appeared on TV or print.

He was also dressed exquisitely, his Italian suit handmade and somehow making him sexier than a guy in swimming trunks. There was just something about a man capable of carrying a ten-thousand-dollar suit without any difficulty that was infinitely appealing, breathlessly so if the gasps of the teachers and students who spotted him were anything to go by.

Again, he relied on his GPS to search for his sister, and it took him out of the school building and into an old but picturesque stone path that led to a greenhouse. As he came closer, its glass walls revealed its occupants, which were Diana and…

Mairi glanced up, startled, and then she was tempted to look away again when she realized it was Damen’s younger sister talking to her. Diana strongly resembled Damen in looks – strong enough that it made her
remember
what she had been trying for so many sleepless nights to forget.

The dark-haired girl had an uncertain smile on her face, forcing Mairi to muster a smile of her own. Diana’s shyness came from having an unsupportive mother, and having met Esther Leventis herself, Mairi could certainly relate.

“You mean I say it less than a hundred times a day?” She wanted to sound lighthearted, but her voice cracked at the end.

Diana was still at the entrance of the greenhouse, hovering, and Mairi waved at her to come in. A feeling of déjà vu struck her, but she pushed it aside.

Her student came to her side, quietly gazing as Mairi continued to arrange the newly transplanted roses. The head gardener had used a small portion of the monthly budget to replace old and broken pots with beautiful clay ones, and Mairi had volunteered to take over the arrangement.

The Inside Job by Jackson Pearce
Seven Deadly Sins: My Pursuit of Lance Armstrong by David Walsh
None So Blind by Barbara Fradkin
Fell of Dark by Patrick Downes
Goldstone Recants by Norman Finkelstein
50 Ways to Find a Lover by Lucy-Anne Holmes
Sidney Sheldon's Chasing Tomorrow (Tracy Whitney) by Sidney Sheldon
Most Wanted by Michele Martinez
Hercules: The Legendary Journeys Two Book Collection (Juvenile) by David L. Seidman
The Doctor She Always Dreamed Of by Wendy S. Marcus