Read The Artful (Shadows of the City) Online

The Artful (Shadows of the City) 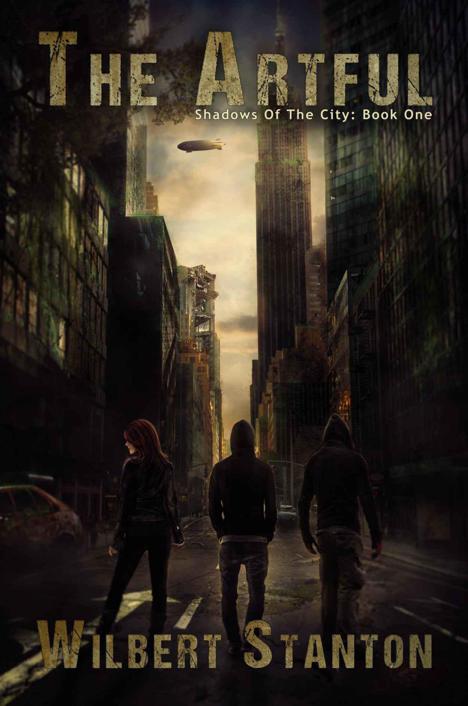 I dedicate this book to everyone who said I should write. At times it was hard to believe in myself, without the support and love of you all I would have never found my inner muse.

To my father, it has always been my goal in life to make you proud. I always dreamed of the day I could surprise you with this book.

To my mom, who always knew my potential even before I did. For always taking me to the book store. For telling me to never give up.

To my sister, for always reading everything I ever wrote, and swearing I would be an author one day. This is officially that day!

To Crystal, for being my backbone and believing in everything I do. For reading countless drafts, and standing by me through my ups and downs. For being my voice when the world was too loud. I will always love you, from now until the world ends. Even though you don’t like time travelling-pirate-elves.

Lastly to my “crew”, Brandon, Dontae, Todd, Jamel, Diana and Jessica, each of you are in this story. Each character and idea is based on one of you or something we’ve shared in some way or form. I thank you all for being my strength, courage, confidence, loyalty, and dedication.

odger was only eighteen, yet he stood at the center of the party, a gravitational force attracting everyone. He wore a fancy-tailed coat and top hat with loose, brown hair falling from underneath, framing his sun-tanned face. With a glass elegantly in his hand, he acted the part of Mr. Cool with little thought. People, women in particular, flocked to him.

I was never jealous of Dodge, not really. I envied him and readily acknowledged I would never be as intriguing. In all my seventeen years I could never have the confidence he had. I was just a hopeless scrawny kid in comparison, average at best. I accepted that. I did, however, hate that I felt myself forever in his shadow. You see, Dodger and I were Gutter Punks, the best crew of thieves the world has ever seen, but I think the world believed I was his sidekick.

“Twist, here, boy, now there’s a lad!” he yelled in the mocking voice he used to make fun of the wealthy.

I sauntered over, awkwardly pushing my way through the group of giggling girls surrounding him. I felt uncomfortable, my pants too big, the fancy dress coat too long for my liking, and the gold-tipped cane all but useless. While Dodge wore his disguise like a form-fitting glove, I looked like a child wearing his father’s clothes.

Dodger was busy talking to a well-endowed socialite; her high heeled boots met a Victorian bell-shaped dress, and her corset was so tight I wondered how she could breathe. Her skin was pale, and her eyes had the usual bloodshot look we saw in drug users. Many of the other women were of the same cast. They were ghosts, hanging onto every word he spoke as if he were a magician, able to conjure up whole new worlds.

“So I was telling my fellow Twist here”―he looked deeply into the cleavage of his mark―“We’ve explored so much of this city, our skin is permanently tanned. It’s time for new adventures, wouldn’t you say? With Mayor Reynolds nearly set to go to war with that Brooklyn tyrant Chrysler, Manhattan will soon be a battlefield! You would think each mayor would be content to stay in his own borough, and yet they both want a piece of our great Manhattan. I shudder to think what would happen if these parties were put to an end. All we need is to hijack an airship, which would be no challenge for me.” He ripped the cane from my hands and pointed it at a passing waiter.

“Move and you die, good sir. Alas, what have you to offer me in your surrender?”

The waiter frowned, and held up his tray of wine.

“Very good.” Dodger finished off his glass and replaced it with a full one.

“You see, I am quite skilled in swordplay. Once we have control of the ship, we will sail past the quarantine border and to the end of the world.”

His mark gasped in exaggerated fear.

“Ah, no worries, my dear.” He leaned in close, holding his hand to her chin. “As we search the farthest reaches of the world, I shall use your beautiful smile as my morning star, always shining my way back home.” She squealed in delight, her pale face turning a shade of pink, then flat-out red. He leaned in and kissed her, long and passionately. The other girls frowned in jealousy; he ran his hand down her back and dipped her.

I found the band playing center stage more interesting, though I use the word
playing
loosely. It was more of a death rattle. The pianist seemed to be fighting sleep and losing dearly. The guitar player held an amazing instrument, all gold and geared. He strummed the fine threads slowly, rocking back and forth, lost to a dosed haze. Dosers were what we called the rich and advantaged who spent all their lives drugged up. It wasn’t surprising to find even the band members were escaping through drugs. While the rest of the world struggled and fought over valuable meds, they took for granted and abused what they had. It made me angry just being in their presence.

Dodger walked off; his shadow of groupies followed. I surveyed the party, the extravagant wealth. The reckless consumption of alcohol and wasted food made my stomach grumble. I refused to eat, knowing so many suffered from hunger. Yet these people acted as if they were another breed, lived like they had no idea what the world was like outside the protection of their tower. Partygoers danced, while some collapsed in dosed heaps, and the most uninhibited ripped at each other’s clothing in darkened corners. The windows were tinted dark, holding the damaging sun rays at bay. I felt like taking a hammer to the glass and letting the rays consume these vampires of wealth.

Their skin was so pale, almost translucent. They had clearly never been out in the sun. I bitterly remembered the rough boils and blisters that tortured me in my youth, caused by the sun they were lucky enough to avoid. Ten years ago, no one had been spared from the virus, but the med heads and dosers made it clear a line had been drawn. There were those who could afford the sanctuary of the towers and all the medication they could ever want to fend off sickness and boredom, and those who couldn’t.

Nobody knew where the virus had come from. Theories abounded, of course―terrorists, Mother Nature, the Rapture, amongst other things. Regardless of your view, one thing remained the same. Half the population had been wiped out, and the survivors were left carriers with a deadly allergy to the sun’s rays. But being inside a tower, watching as the wealthy lived their wonderful lives, I couldn’t help but have another theory. Perhaps it was those in power who released the virus in order to maintain supremacy.

Under Suspicion by The Mulgray Twins
Rising Abruptly by Gisèle Villeneuve
The Dollhouse Society: Felix by Myles, Eden
Meant To Be by Karen Stivali
Either Side of Winter by Benjamin Markovits
Murdered in the Man Cave (A Riley Reed Cozy Mystery) by R. Barri Flowers
Wind Warrior (Historical Romance) by Constance O'Banyon
The Drifters by James A. Michener
Silence 4.5 by Janelle Stalder
May B. by Caroline Rose