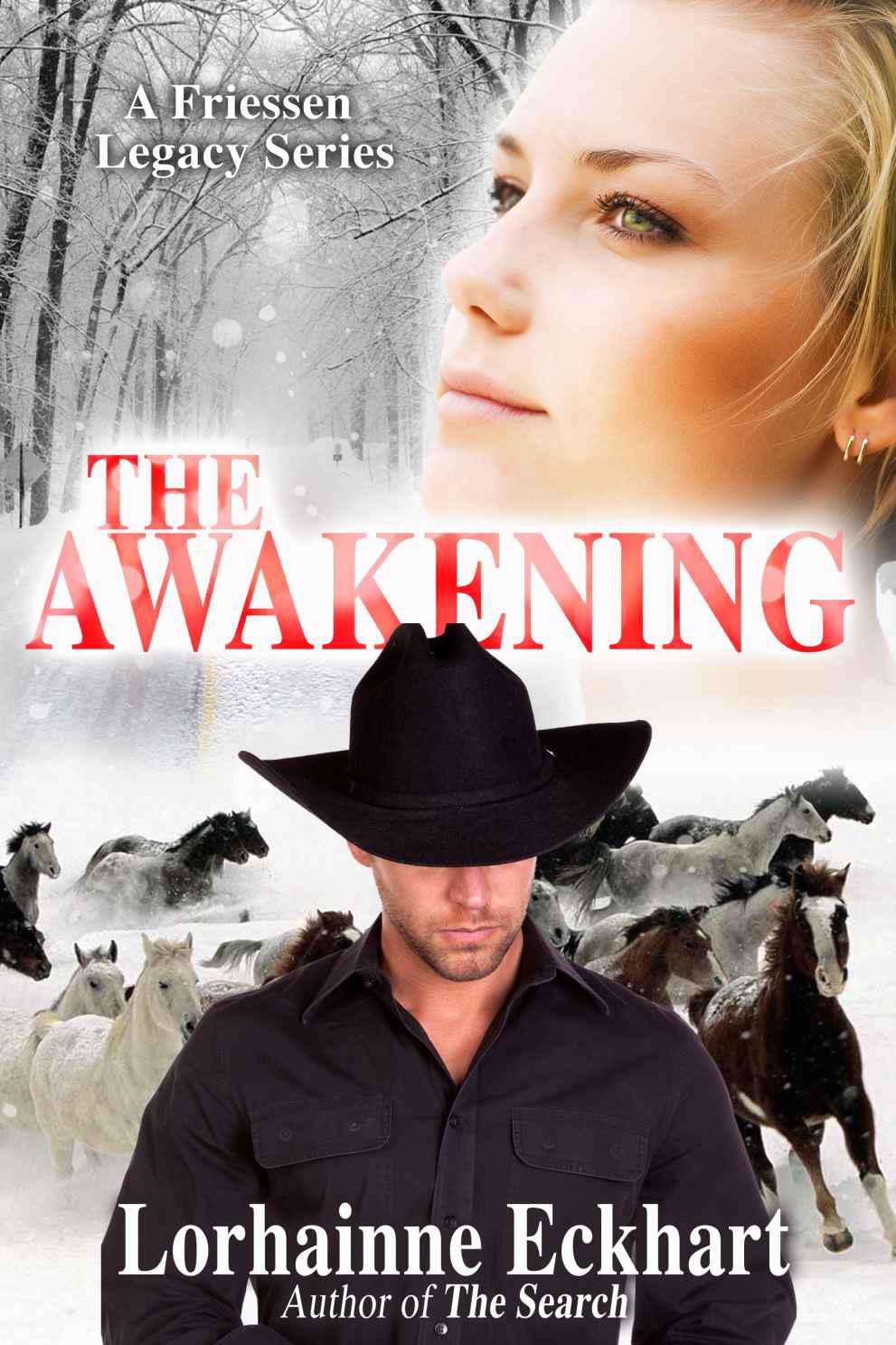 Can a sexy rancher give a young woman hope?

The Friessen Legacy Series in order:

THE FORGOTTEN CHILD - How do you tell a man there is something wrong this his child?

A BABY AND A WEDDING(A bridge short story) - Getting married and having a baby ...  for Emily and Brad everything was perfect, or so they thought until an unexpected surprise threatens to derail their happy day.

FALLEN HERO - She returned for justice, but found love instead.

THE SEARCH (A short story)* - When her husband goes missing she's forced to call the one man she shouldn't.

THE AWAKENING  - Can a sexy rancher restore a young woman's hope?

Other Books in The Friessen Legacy Series

A Baby And A Wedding

Other Books by Lorhainne Eckhart

A Baby And A Wedding

Praise for
The
Friessen Legacy Series...

Ms. Eckhart has crafted a delightful story with engaging characters, enough drama for a Hallmark movie, and enough unconditional love to last a lifetime. The Forgotten Child is one enticing story that will keep you engrossed until the very end, as the past collides with the present. So be sure to check it out!

The Forgotten Child ~
READERS FAVORITE 5
-
Star Review
:
A real page turner
with … a
fast moving plot
. A
must read!

Danger Reunites a family ~ The Search

Lorhainne has a way of making you crazy about her characters, whether it's hating them or loving them...on the edge of my seat for both and can't wait for the next.

The Awakening ~This story is wonderfully rich with twists that deflate the rich and awakens eyes to a young woman doing her best when all doors are turned. Fabulous finish to the series!

Start Re
a
ding

Other Works by Lorhainne Eckhart

“Get this god-awful tree out of here!” Andy shouted as he stormed into the grand library, a showpiece of the Friessen mansion. It was a very masculine room, filled with browns and reds, dark wood, leather chairs, oil paintings worth more than the estate, a room Andy had appointed as his office.

“Sir, your mother ordered this tree and left instructions for it to be set up and decorated in this very room,” Laura, a very young, pretty blonde maid responded without looking at Andy. She continued to hang bright red ornaments on the vibrant white tree.

Andy touched the branch of the Douglas-fir. “I didn’t know that fir trees grew white. What, did you have this dyed?”

This time, the maid glanced at Andy with those sea-green eyes, wearing the ugly maid uniform that hung like a grain sack. It was the most unflattering getup, with a starched collar and buttoned up to her chin. And, of course, Andy being Andy, he couldn’t help wondering how she’d look in something low cut, slinky, and black. Preferably something that fit her like a second skin.

Maybe she’d guessed where his mind drifted, as her face colored and her eyes sharpened into narrow slits. “Your mother made sure all the trees were colored specifically for each room. The one in the living room, you’ll be happy to know, is green.” She averted her gaze and started yanking the ornaments off, pine needles dropping to the blood-red carpet, which was the only thing in this house he’d had a say in.

“So, Laura, is it?” Andy didn’t know why, but there was something about this girl who’d been working in his household since the spring, when he’d first seen her cowering and petrified in the hallway the day Jed disappeared. His cousin, whom he loved dearly, was married to Diana, a woman who haunted his dreams but would never be his. They’d found an injured Jed, thrown from the stallion he had been training up toward blue meadow. And Diana had added to the excitement by going into labor, delivering their baby boy, Danny, his godson, that same night. He’d seen Laura in town shortly after
with
a little boy, and he’d since wondered who he was. She didn’t look old enough to have children, as she appeared fresh out of high school. But, then again, he never asked, because he, unlike his father, didn’t become personal with the staff.

“Yes?” The girl was staring at him with those big green eyes, a pale complexion and not a spot of makeup on. But then, she didn’t need it, and Andy was tired of all those women who caked on the makeup like a mask just to hop in their cars to go to the store.

“Sorry, been distracted lately. I was just wondered how things are going, if you’re being treated okay. Do you like working here?”

Damn, that wasn’t what he really wanted to know, but he had to remind himself that she worked for him, his family. He didn’t rightly know who had hired her, but the sizeable staff in the house and on the grounds was handled by Jules, the head housekeeper, an older lady who’d been with the family since Andy was in short pants. He wondered, too, if the deep lines on Jules’ face and the thick gray in her hair were a result of Andy and the wily pranks he had played on her as a child.

Laura dropped her gaze again, her cheeks tinting a hint of pink as she boxed up the ornaments. “Everything’s fine, sir.” She said it so abruptly and carried on as if trying to ignore him, and that irritated the hell out of him. She worked for him. She’d damn well give him her full attention.

“Laura, you work for me. So when I ask you something, I expect your attention and a truthful answer,” he growled.

Her face colored a brighter red, and she glanced back at him warily. Andy, being as astute as he was, didn’t miss the hint of dislike. “You’re right about one thing: I do work for you, but you don’t own me, and you don’t know me well enough to tell whether I gave you a truthful answer. So again, I’ll repeat it, everything’s fine, sir,” she responded in a tone that was pure business. This time, she didn’t look away as she continued to blush furiously, her lips pursed and trembling slightly as she stared up at him.

“If that’s all, sir, I’ll finish taking down these ornaments and haul the tree out of here.” Again, she stared him down with those green eyes, resembling a very enticing witch.

Andy uncrossed his arms and moved to his desk, pulling out his leather chair and sitting down. He propped both feet on the desk, crossing his legs at the ankles, and watched her.

She seemed startled, as her eyes widened. Maybe she expected him to leave. “Carry on” was all he said.

She took a moment to collect herself before continuing to yank ornaments from the branches as if she were being timed. When she bent over in that god-awful uniform, the dress rose up her thighs, and he was treated to a view of her shapely legs. She was tiny, though—her head wouldn’t have topped his shoulders—and nervous as hell, too. He sensed she couldn’t get away from him fast enough. For the life of him, he’d never experienced a woman running from him. It had always been the other way around. Women continually sought excuses to find a way to be around him. In town, at the store, dropping items, a purse, a bag—one woman even unbuttoned her blouse to expose a generous amount of indecent skin before crossing the street to him. He’d never had a problem finding a woman. The fact was that none of them held his interest, except Diana. But she’d never be his.

Andy was lost in his thoughts, so he only caught a glimpse of Laura as she took a header into the twelve-foot white Christmas tree, and it crashed down with the sound of shattering glass.

Andy leaped up and raced around the desk. Laura was tangled in the tree. Her dress had ridden up, showing the elastic of her old-lady panties. What a waste on such a round, curvy butt.

“Are you okay?” Andy reached down and lifted Laura as he would a child, and he sat her on the edge of the desk.

“Mr. Friessen, whatever is going on in here?” Jules, the older, graying, plump housekeeper who ran the estate, hurried toward them before she stopped and gasped at the mess. Ornaments were strewn across the plush red carpet, some shattered. The huge tree had knocked over one of the leather chairs and the bar that had been moved to the other side of the room to make room for the Christmas tree. Decanters and bottles lay on their side, the shattered crystal and spilled liquor seeping into the carpet. Laura sat perched on the edge of Andy’s desk, white pine needles sticking out of her blonde hair. Her neat bun had drooped, and her hair hung in an untidy mess. She appeared dazed.

“Oh my God!” Caroline, his mother, shouted as she strode with all the elegance of a queen, dressed in a deep green silk dress that showed what an attractive woman she still was. Her shoulder-length hair was impeccably groomed, and when she stopped beside Jules, her shrewd gaze landed on Laura. “What a mess you’ve made, girl.”

Even Andy was taken aback by the iciness of her tone, and he didn’t miss the way Laura cringed, like a dowdy school girl.

As far back as Andy could remember, his mother had never shown an ounce of empathy toward anyone. This time was no different. She glared at Laura with as much feeling as a viper and the energy of one that was about to strike, and then she surveyed the damage, the disarray, and the mess with a swift, well-organized glance. Lifting her chin and her back straight, she spoke clearly: “The damage will come out of your last check. Jules, see that she’s escorted off the property within the next five minutes.” She looked over to Laura. “Do not ever return. If you do, the proper authorities will be called.”

Andy jerked his gaze from his mother to Laura’s wide eyes, now filled with tears. He could tell she was struggling to hold it together, as she appeared to have trouble swallowing. “Mother, it was an accident. You’re being a bit hasty. For God’s sake, it’s just a stupid tree. And I ordered her to get it out of here. I made it clear to you before that if you want to decorate the rest of the house, it’s fine—just stay out of my office,” Andy said to his mother, but Caroline, who could be so prickly at times, refused to back down.

More Lies and Alibis (Using Lies as Alibis #2) by Tiffany L. Warren
Lionheart's Scribe by Karleen Bradford
Death and the Cyprian Society by Pamela Christie
The Bullion Brothers: Billionaire triplet brothers interracial menage by Tania Beaton
CupidRocks by Francesca Hawley
The Loverboy by Miel Vermeulen
Do No Harm by Gregg Hurwitz
Murder at the Falls by Stefanie Matteson
A Killing Gift by Leslie Glass
Forget Me Never by Gina Blaxill