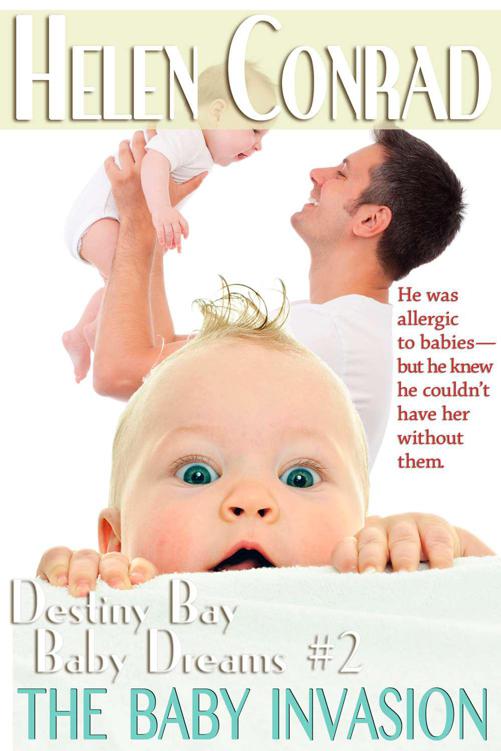 This novel is a work of fiction. Names, characters, places and incidents are products of the writer’s imagination or have been used fictitiously and are not to be construed as real. Any resemblance to persons, living or dead, actual events, locales, or organizations is entirely coincidental. All rights are reserved. No part of this book may be used or reproduced in any manner whatsoever without written permission from the author.

Cast of Characters in the series Destiny Bay~Baby Dreams

and
Katherine Carrington
parents of:

Scott Carrington
~airline pilot and confirmed bachelor who grew up responsible for so many younger siblings, he’s vowed to stay away from dealing with kids-forever!

Cathy Feenstra
~divorced mother of three who has taken a baby sitting job that leaves her with three more and no idea where their mother disappeared to.

April Meadows
~ mother of triplets who runs off to Lake Tahoe.

Robby Crockett
~her boyfriend and father of her babies who threatens Cathy.

Mickey (Adams) Carrington
~owner and proprietor of
Mickey’s on the Bay
, a local café where the Carringtons tend to hang out.

Charity Ames
~restauranteur, now married to Ross Carrington and having his baby.

Scott Carrington wasn’t expecting intruders-especially not ghostly figures in white nightclothes. So when his backyard was invaded, at first he didn’t trust his own eyesight.

It was close to midnight. He’d come in late on an international flight with an interminable layover in Bombay. Layovers were always tedious, but this one had been especially bad.

He hadn’t been able to sleep, and for some reason, he’d spent hours staring at the ceiling, watching scenes from the most painful chapters of his life, as though it were a stupid and boring movie.

His mother’s voice served as the film score.

“Scott, I just don’t understand you.

What are you doing to yourself?

Was your childhood really so awful?

He’d groaned and jammed a pillow over his ears as her voice echoed inside his head.

His mother had passed away five years ago and he still felt her disappointment as though he’d just heard it yesterday.

She hadn’t lived long enough to see him become an airline pilot and begin to make a good living.

To her, he would always be a bum.

Funny how he couldn’t get past that.

Sitting in the cockpit of the giant jet airliner, all he’d thought about for the last two thousand miles was how good it was going to feel to soak his aching body in his own backyard hot tub, washing away his exhaustion, washing away his mother’s voice.

He made the short hop from Los Angeles up the coast to Destiny Bay and drove his Porsche from the airport to the home kept ever ready by his wonderful daily housekeeper, Rebecca.

Sighing happily, he took off his uniform, then went right out back, leaving the lights off, and slipping into the water. Lying against the side, he gazed up at the star-studded coastal sky.

He closed his eyes, feeling all the tension begin to ooze out into the hot water, and he sighed again. This was the life. His body was still vibrating from the long flight. He needed this, badly. Groggy from lack of sleep, he began to doze.

And then for some reason he opened his eyes and something white and fleeting caught his attention. He squinted, looking into the darkness at the end of his yard opposite from his pool. Something moved, then came into full focus for a moment. It seemed to be a girl with long blond hair, dressed in flowing, translucent white.

He blinked, and the vision was gone.

“Good Lord,” he muttered to himself. “I must really be beat this time.”

He was thankful he’d forgone the stiff drink he’d thought about having. Better to see ghostly little girls than pink elephants. He began to sink back down, eyelids drifting shut.

But no, there she was again, this time shimmying up his tree, her gown fluttering in the breeze. He frowned.

That
was
his tree, wasn’t it? Some kind of fruit tree.

Apricot, maybe. He never paid any attention to it, letting the gardener take the fruit he wanted, and throwing out the rest. And now it contained one ghostly little girl.

Unless he was seeing things.

His gaze sharpened and he tried to wake up enough to concentrate. Something told him this was no vision. Visions didn’t eat apricots. This had to be a real little girl.

Suddenly there was another child, a towheaded boy built like a fireplug, also in white. The child stopped and gazed about the yard and Scott could have sworn his eyes gleamed with an unearthly light. Then he, too, disappeared, only to reappear shimmying up the tree.

Scott frowned and shook his head to clear it. One part of his brain was telling him to close his eyes and ignore the children---they were figments of his imagination that would soon go away.

Another part of his brain was trying to rouse him, to warn him his territory was being invaded, that it was time to rise and defend his land from interlopers.

He moved restlessly in the water, not sure which impulse to follow.

After all, he hadn’t been home for two weeks.

If a small family of wandering ghostly children had decided to take up residence in his yard, so be it.

They didn’t seem to be hurting anything.

As long as they kept the noise level down…

There was a third child. This one moved on terribly unsteady and very bowed little chubby legs.

And this one saw him.

He stopped, standing very still, dressed only in diapers, and then he raised a chubby hand and pointed at Scott.

“Aga doo,” the youngest repeated, pointing in Scott’s direction again and seemingly frustrated that no one was paying attention to his warning.

Scott sighed. There was no use kidding himself, no use hoping this was all a midnight mirage.

It was obviously a toddler invasion. He was going to have to rouse himself to do something about it.

This time the voice was adult and coming from the neighboring yard. Scott’s head swivelled and he waited, sure the owner of the voice would appear out of nowhere, just as the others had.

“Beanie, where are you, you little rascal?”

Scott sat very still and watched, fascinated, as the bottom end of a plank in the fence shared by the two yards rose like one side of a teeter-totter and another ghostly figure slipped into the yard.

This one was also dressed in white—but this one was definitely no child.

The white was made from some sort of gossamer fabric and formed adorable baby doll pajamas the like of which he hadn’t seen since his teenage fantasies.

And this one had all the rounded attributes of a full-grown woman. Silver blond hair curled in ringlets down her back. The pretty, heart-shaped face was creased with a worried look as she gazed about the yard.

Scott realized, suddenly, that he was holding his breath.

He could see all of them now, the two in the tree, the young one hovering at the bottom, the lovely woman searching for them.

Each wore white and each seemed to be glowing somehow. The thought that they were supernatural flickered through his mind again, but he dismissed it quickly. He was fully awake now, and fully aware that they were all too real.

She’d found the baby and scooped him up into her arms.

“You bad boy. Coming over here barefoot! Who knows what awful things this man has in his yard?”

She peered up into the tree. “Beth! Barnaby! You two get down this instant! You’re supposed to be in bed and you know it!”

“Mommy, we’re just getting apricots. The man doesn’t want them.”

She shifted the baby from one hip to the other with the practiced ease of a longtime mom. “Well, that’s true. How anyone can let good food rot. ...”

“He’s a mean old man,” the young voice answered. “The kids down the street told me.

He’s a mean old man and he hates kids.”

“Mean old man,” a male version of the voice echoed from the treetop.

Scott found the urge to defend himself rising in his chest. Mean, maybe-but old at thirty-five? Hardly! It was time to assert his authority in the situation. He looked about for his towel and found it hanging almost close enough to reach.

The baby chose that moment to glare at Scott again, lift his little hand and point, yelling “Aga! Aga!”

The Corner by Shaine Lake
Demonio de libro by Clive Barker
Joan Wolf by A Double Deception
Awake Unto Me by Kathleen Knowles
Causing Havoc by Lori Foster
No Cry For Help by Grant McKenzie
Fire & Ice by Anne Stuart
Long Blue Line: Based on a True Story by E. McNew
Switch on Your Brain: The Key to Peak Happiness, Thinking, and Health by Dr. Caroline Leaf
Between Boyfriends by Michael Salvatore