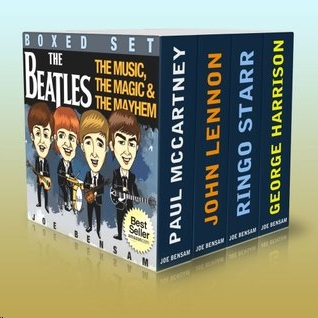 The
Music, The Magic and The Mayhem

The Extraordinary Life and Times of
Ringo Starr

From
Beatlemania to Buckingham Palace and Beyond

Death in the Family

The Hype on Paul’s “Death”

The Women in His Life

The
four lads had just arrived in America and were scheduled to perform live at
The
Ed Sullivan Show
with some of their top hits. It was to be their first
appearance on this American trip. And from backstage, they could hear the
excitement from the audience, composed largely of screaming hysterical teenage
girls, as Ed Sullivan introduced them.

And
when it was time to give their performance, the screams only grew louder. One
of the Beatles, Paul McCartney, who was just 22 then, followed Sullivan’s
opening intro with
All My Loving.
He sang enthusiastically, tapping his
left foot in rhythm and swaying to the music as he looked at the audience.
Among them, Paul was a standout. He was charming and lived up to being the cute
Beatle.

Back
when the Beatles were just the Quarrymen, it was John Lennon who led the band.
It was
his
band, he chose the members, he decided who goes and who
stays, and wrote the songs they sang. But on this day, when they performed in
front of the studio audience and in front of more than 70 million viewers, it
was Paul who stood out and caught the eye of the girls and just about everyone
who saw them. It was him who made people smile.

The
Beatles were among the most successful and famous bands during the 60s and 70s
all over the world. Everywhere they go, there’d be fans who’d scream and faint and
follow them. Some of their singles became number one hits in the UK as well as
in the US. They were as famous as Elvis Presley.

The
Beatles became a very successful band and their music lived on until today. But
much like other bands, there was a time when it all came tumbling down. The
lads broke up in 1970 and each established a solo career. For Paul, though he
loved his mates, life must go on. He must continue to make music, which was
what he did following his departure from the band. For a while it was just him
and his then-wife, and then formed his own band. This, too, passed, until he
was on his own again.

Paul
McCartney became a legend on his own and was “the most successful composer and
recording artist of all time.” He proved himself capable of making it on his
own even without the support of his former band mates although he couldn’t deny
that it was with the Beatles that he had made himself known to the world.

Now,
Paul could look back and claim that he made it! Having journeyed through life
with its twists and turns, he was strengthened with each success. Here he was,
once a teenager who one day heard rock ‘n’ roll on the radio and decided that
it was where he’d make his mark. He always looked back on his childhood days
and relived the most memorable events of his life.

James
Paul McCartney was born on June 18, 1942, in Walton Hospital in Liverpool, England,
where his mother, Mary, worked as a medical nurse and midwife. His father, Jim,
was a cotton salesman and a pianist in Jim Mac’s Jazz Band in Liverpool. Jim
was already in his early 40s when Paul was born while Mary was in her thirties.
His brother Michael came two years later.

Paul
grew up in a family where their time together meant a much. They had always
been close, usually spending a dark and cold winter afternoon in their sitting
room where Jim would play in the family’s old piano.

Jim
McCartney wasn’t an excellent pianist; back in the day, he was playing trumpet.
But he was a musically gifted person, having a good set of ears and nimble
fingers that could play out a song. Mary, on the other hand, wasn’t musical,
but she came to love how her husband sang and played.

During these moments, when the family sat together and Jim
played, Mary loved how their son Paul would look up at his father with
admiration. He would usually request for
Lullaby o the Leaves
, though
his favorite was George Gershwin’s
Stairway to Paradise
. He would say,
“Play it again, Dad! Play it!”

Paul
loved this song very much, and he would beam when his father, when he was done
with the song, looked over his shoulder and gave a little wave, as though to an
audience. And Jim would always tell his son, “You should learn an instrument.
Once you do, you’ll always be invited to the party.”

Paul
took this lesson to heart the way Joe did after his father, also Joe, gave him
that advice. And Paul was fortunate to belong to a family where music was a
part of life. His grandfather, Joe McCartney, was the bass horn-playing
patriarch of the McCartneys. He was born in Everton, Liverpool in 1866. Back in
those days, life was so hard that even if you worked hard, there’d still be not
much left over. Despite the circumstances, Joe McCartney found a job at Cope’s
tobacco warehouse where he cut tobacco leaves, stove it down, and roll it out. He
was there for many years and paid enough to support his family.

Joe
and his wife Florrie had nine kids with seven living past the cradle. Despite
the crowded house, the door was usually open. And when it was, music was always
playing. By then Joe was playing his horn in the territorial army brass band.
His friends and bandmates would usually drop by for a bit of play and a cup of
tea. And even at night, the doors were still wide open with the music blaring
and friends and neighbors dancing in the streets.

Jim
McCartney was the second-oldest in the family and followed his father’s footsteps
by taking up the trumpet. When a neighbor gave the family an old spinet piano,
Jim became interested to learn how to play it. He taught himself enough chords
to be of use when the family musicale began.

When
he was 14, Jim left school and came to work for A. Hannay & Co., Cotton
Merchants where he earned six shillings a week. He worked so hard that after 14
years, he was promoted to the suit-and-tied ranks of the salesmen.

By
the end of the thirties, things took a turn for the worst. World War II was looming
upon Liverpool. Jim was spared from being enlisted due to his advanced age and
a ruptured eardrum from a childhood accident. Meanwhile, the cotton industry
had been nationalized for the duration. As a result, Hannay’s was shuttered and
Jim was out of job. He found a low-paying job in the Napiers engineering works.
Then bombs started to explode all on Liverpool.

While
the war raged on, Jim dreamed about Hannay’s being back in business and he
could resume his prewar career. But the future was still dim, and he would find
himself instead thinking about his future family.

Jim
met his future wife when he visited his sister Jin’s house with her husband for
a little drink. Mary Mohin was there, sitting in the living room, and Jim
couldn’t take his eyes off her.

They
spent the night chatting and joking. Jim made her laugh. They were married on
April 15, 1941 and moved into their own place on Sunbury Road.

Their
first child, a boy, arrived on June 18, 1942, born in a private ward of Walton
Hospital where Mary worked. Thanks to her friends, Jim was able to catch a
glimpse of his son right after his birth. But as no one told him about the
appearance of babies shortly after birth, Jim was shocked with what he saw. He
recalled, “He looked like a horrible piece of red meat. He had one eye open and
just squawked all the time.”

But
after a bath for the baby, and a good night’s sleep for the father, things
improved. By the time the baby came home to his parents’ home in Anfield, Jim
saw things clearly. “He turned out a lovely baby in the end.”

With
the addition of Paul, the family moved to a Liverpool council-subsidized house
in Wallasey. The family moved back to central Liverpool one year later. When
the second baby, Peter Michael McCartney, arrived, they were qualified for a
larger flat in a modern complex in Knowsley. Two years later, the family lived
in a new council development in Speke, where George Harrison, Paul’s future
band mate, and his family also lived. The neighborhood was still under
development, so Paul and his brother would bike down muddy streets and chase
their friends past vacant lots.