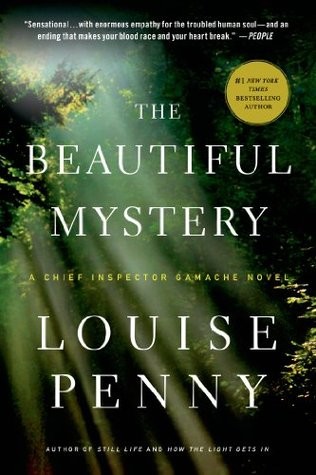 The Beautiful Mystery is a best-selling brilliant novel created by Louise Penny, who is admitted to be one of the most talented writers in her genre.

Located in the middle of nowhere, monastery of Saint-Gilbert-Entre-les-Loups is cut off from the rest of the world. It nestles on a remote island of Quebec,

surrounded by wild nature. Twenty-four monks, recruited for their devotion and glorious voices have found a shelter there. They lead ascetic lives, praying

in peace. Living in harmony with nature, they grow vegetables and keep hens. But the main purpose of their lives is to save Gregorian chants, passed on to

them by previous generations. They are determined to save this heritage at any cost because they are the last living group on earth who possesses this

knowledge. However, outside world starts to interfere and disturb their peaceful existence. Ironically, the monks, who have hidden from prying eyes, gain

worldwide fame for their enchanting, profound songs. There is hardly anybody, who is able to remain untouched after listening to their strong voices.

But later it is discovered that something is amiss at the shrine of devout monks. Respected choir director is killed. They lock themselves away in order to

sort this out and find the answer. On the surface there is peace, harmony, and contemplation, but what would you see if you watched closely? Two

inspectors, Gamache and Beauvoir, are determined to look into this crime and reveal the truth. Disquiet and discord hang over the monastery, there is no

trace of apparent peace that used to dominate within the sacred walls. Within these walls there is a murderer now, and everybody cannot bear a single

thought of it. But before solving this mystery Gamache of the Sûreté du Québec has to fill the deepening crack that appears between divine and human and

threatens their sinful mortal souls to be lost forever. Will the murderer get away with the crime or will justice triumph? The book concludes with a

cliffhanger ending and you definitely can’t help wanting to read the continuation of this engaging story, where the main characters seem to be woven of

The Bride Wore Black by Ally Gray
Redeeming the Deception of Grace by Kristin Vayden
Can You Survive the Zombie Apocalypse? by Max Brallier
Something the Cat Dragged In by Charlotte MacLeod
Choices We Make: The Moretti Brothers Series by Young, Sage
Gorgeous East by null
Expose (Billionaire Series) by Harper, Evelyn
Can't Fool Me Twice: Sweet Contemporary Romance: Belles in the City Book 1 by Mayne, Debby
Downfall of the Gods by K. J. Parker
Lacrimosa by Christine Fonseca