Read The Beauty Bride (The Jewels of Kinfairlie) Online

The Beauty Bride (The Jewels of Kinfairlie) 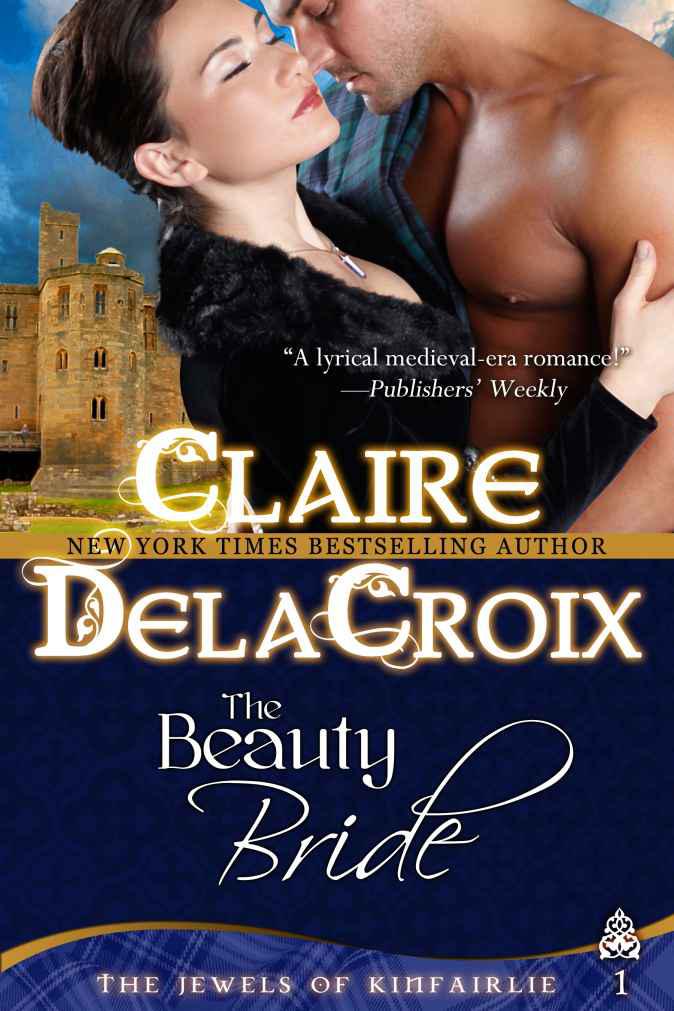 More cherished than gold are the Jewels of
Kinfairlie, and only the worthiest may fight for their love...The Laird of
Kinfairlie has unmarried sisters, each a gem in her own right. And he has no
choice but to see them all wed in haste.

Lady Madeline’s heart is not for sale...especially
not to a notorious outlaw like Rhys FitzHenry. Yet Madeline’s hand has been
sold, to none other than this battle-weary warrior with a price on his head. A
more dutiful maiden might cede to the Laird’s command and meekly accept her
fate, but Madeline has never been obedient. She decides to run away, though she
never dreams that Rhys will pursue her. She does not expect this taciturn man
to woo her with fanciful stories, much less that each of his enthralling tales will
reveal a scar upon his shielded soul. She never imagines that a man like Rhys
could imperil her own heart while revealing so little of his own feelings. When
Rhys’ past threatens his future, Madeline takes a leap of faith. She dares to
believe him innocent — and risks her own life to pursue a passion more
priceless than the rarest gem.

Praise for THE BEAUTY BRIDE

“Claire
Delacroix is always a winner for me with her tales of chivalry, passion and
lush romance – I simply love her books. I found this one to be a great
read, and recommend it highly to anyone liking a rousing, medieval-period
romance.

“Ms.
Delacroix creates an atmosphere so real that you’ll feel the wind in your hair
as you race across the land with the protagonists. This writer is a genius at
stirring the emotions of her readers and letting them share the excitement of
the characters.”

“Once
again, Claire Delacroix comes through with an historical romance that does not
disappoint…There are few medieval writers who can sweep me away as Claire
Delacroix can. I cannot wait for the following books of this trilogy.”

“Ms. Delacroix has painted a tale of love and romance fit to be framed…I quite
literally devoured this book in a single day of reading. It was so entertaining
and well written that I could not bring myself to put it down. I even forgot to
eat because I was so wrapped up in this wonderful tale and, gasp, there was
chocolate in the house!”

“After
reading this magnificent book, it’s easy to see why Ms. Delacroix is considered
one of the best medieval romance authors around. With careful attention to
detail and a beautiful writing style, she whisks you to the Middle Ages for a
grand romantic adventure...
The Beauty Bride
is a fabulous read!”

“Ms.
Delacroix has a wonderful way of pulling you into the story…you will not be
able to put the book down until you are finished.”

“
The Beauty Bride
is a
book that captures you from the first page…a magical and inspiring story. Four
hearts!”

“An
exciting action tale fully packed with an assortment of well-defined forceful
characters, both old and new…This is a prime example of the highly imaginative
and entertaining novels Delacroix is celebrated for, in a stellar start to what
looks to be a sensation new medieval series that is heading straight for my
‘keeper shelf’!”

“
The
Beauty Bride
is a gripping
read – a passionate, compelling treasure of a book."

Ideas
come from many places, but I think the most satisfying story ideas are those
that grow out of other stories. When I wrote
The Rogue
, I fully anticipated that Merlyn and Ysabella’s
story would stand alone. In the course of writing that book, however, I became
fascinated by Merlyn’s wicked brother, Gawain. I wondered whether the love of
the right woman would reform him, and Eglantine volunteered for the job. Their
story was told in
The Scoundrel
.
Eglantine had such a passion for her family holding of Inverfyre that I was
anxious to see how that story was resolved – my curiosity resulted in
The
Warrior
, about the Hawk’s
attempts to secure Inverfyre for the future. Of course, he could not have
managed it without the aid of the woman he seized for his bride, Aileen, and
her psychic powers.

At
the end of
The Warrior
,
there is a celebration, and the entire extended Lammergeier family gathers at
Inverfyre. There is a single sentence about Roland of Kinfairlie, his wife and
their eight children. Eight children! I started to think about the ruckus of a
big family like that and the interplay between all those kids. Before I knew
it, Roland and his wife had been tragically killed and their eldest son,
Alexander, was left to deal with the legacy of Kinfairlie much earlier than
he’d ever expected. For financial reasons, he needs to see his sisters married
– although his sisters are used to speaking their mind around their
brother and are less than willing to comply with his plans.

The
Beauty Bride
is the first
book in The Jewels of Kinfairlie trilogy. Here you’ll meet Alexander and his
seven siblings, as well as follow Madeline’s adventures as the first to be wed.
This book was originally titled
The Bride Auction
and there is an excerpt of it in the back of the
original print edition of
The Warrior
with that title. The title was changed before the book was printed,
but the story remains the same. All of the Jewels of Kinfairlie books are
available once more in digital editions and new print editions.

Recently,
I’ve returned to medieval Scotland, to Ravensmuir and Kinfairlie.
The
Renegade’s Heart
, a new
medieval romance from me and the first in a new series called The True Love
Brides, will be published. This series picks up after The Jewels of Kinfairlie.
The Renegade’s Heart
is
the story of Isabella’s romance. (Neither I nor Annelise are surprised that
Isabella chased her HEA out of turn!)

As
with all of my re-releases, I’ve chosen not to revise this book, but to
republish it pretty much the way it was published in the first place. There may
be a few typos missing in this version, but otherwise it is very similar to the
original.

I’ve
enjoyed revisiting
The Beauty Bride
, and hope you enjoy reading it, as well.

Until
next time, I hope you are well and have plenty of good books to read.

This re-release has had only
minor corrections from the original text. It is essentially the same as the
original print edition, although there are minor variations.

Without limiting the rights
under copyright preserved above, no part of this book may be reproduced, stored
in or introduced into a retrieval system, or transmitted, in any form, or by
any means, (electronic, mechanical, photocopying, recording, or otherwise),
without the prior written permission of both the copyright holder and the
publisher of this book.

This is a work of fiction.
Names, characters, places, and incidents either are the product of the author’s
imagination or are used fictitiously, and any resemblance to actual persons,
living or dead, business establishments, events, or locales is entirely
coincidental.

The scanning, uploading, and
distribution of this book via the Internet or via any other means without the
permission of the publisher is illegal and punishable by law. Please purchase
only authorized electronic editions, and do not participate in or encourage
electronic piracy of copyrighted materials. Your support of the author’s rights
is appreciated.

An Excerpt
from THE ROSE RED BRIDE

This trilogy is dedicated to my readers,

with heartfelt thanks for your loyalty and
support.

May you enjoy reading about the Jewels of
Kinfairlie

as much as I have enjoyed writing their tales.

Kinfairlie,
on the east coast of Scotland - April 1421

Alexander,
newly made Laird of Kinfairlie, glowered at his sister.

There
was no immediate effect. In fact, Madeline granted him a charming smile. She
was a beautiful woman, dark of hair and blue of eye, her coloring and
comeliness so striking that men oft stared at her in awe. She was fiercely
clever and charming, as well. All of these traits, along with the score of men
anxious to win her hand, only made Madeline’s refusal to wed more irksome.

“You
need not look so annoyed, Alexander,” she said, her tone teasing. “My
suggestion is wrought of good sense.”

“It
is no good sense for a woman of three and twenty summers to remain unwed,” he
grumbled. “I cannot imagine what Papa was thinking not to have seen you safely
wed a decade ago.”

Madeline’s
eyes flashed. “Papa was thinking that I loved James and that I would wed James
in time.”

“James
is dead,” Alexander retorted, speaking more harshly than was his wont. They had
had this argument a dozen times and he tired of his sister’s stubborn refusal
to accept the obvious truth. “And dead the better part of a year.”

A
shadow touched Madeline’s features and she lifted her chin. “We have no certainty
of that.”

“Every
man was killed in that assault upon the English at Rougemont - that no man
survived to tell the tale does not change the truth of it.” Alexander softened
his tone when Madeline glanced away, blinking back her tears. “We both would have
preferred that James’ fate had been otherwise, but you must accept that he will
not return.”

Xvi by Julia Karr
Teach Me To Live (Teach Me - Book One) by Alannah Carbonneau
Power Play: Kelsey and the Executive by Selena Kitt
Guardian Domination by Hayse, Breanna
The Naked Sun by Isaac Asimov
The Golden Hour by Margaret Wurtele
The Lingering Dead by J. N. Duncan
Grave Phantoms by Jenn Bennett
Blood Vivicanti (9780989878586) by Becket
Ginger the Stray Kitten by Holly Webb