The Best Crime Stories Ever Told 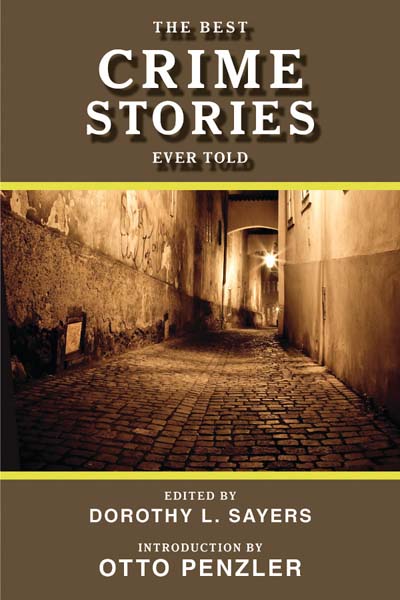 All Rights Reserved. No part of this book may be reproduced in any manner without the express written consent of the publisher, except in the case of brief excerpts in critical reviews or articles. All inquiries should be addressed to Skyhorse Publishing, 307 West 36th Street, 11th Floor, New York, NY 10018.

The Mystery of the Sleeping-Car Express
Freeman Wills Crofts

The Haunted and The Haunters
Sir Edward Bulwer-Lytton, Lord Lytton

The Story of the Greek Slave
Frederick Marryat

Called to the Rescue
Henry Spicer

I
f there is a universal truth to the compiling of an anthology, it is that it is a subjective undertaking. It is almost unthinkable that two people, given the freedom to choose whatever they wanted to include in what attempts to be a definitive collection, would ever select precisely the same stories, just as different folks reach for different chocolates in the big deluxe assortment of sweets.

I probably would not have named exactly the same stories that Dorothy L. Sayers assembled in a book that is comprised of stories from the massive 1932 volume,
The Second Omnibus of Crime
. As the title so conspicuously announces, she had edited a prior volume four years earlier titled, perhaps not surprisingly,
The Omnibus of Crime
, which proved so successful that it prompted this sequel, which also enjoyed brisk sales and the affection of readers, leading to still another volume, this one titled, informatively, if not very creatively,
The Third Omnibus of Crime
.

Sayers was English—as English as one can get. Born and raised in Oxford, she was one of the first female graduates from the venerable university in that beautiful city, and she lived in England for the rest of her life. Perhaps, then, she may be excused for her prejudice in favor of British detective stories. All six of the stories defined by Sayers as “Detection and Mystery” were written by fellow Brits, as if Melville Davisson Post, Mark Twain, Thomas Bailey Aldrich, Frank Stockton, Richard Harding Davis, Jacques Futrelle, O. Henry, and the other superb American writers of crime fiction who had been producing distinguished novels and short stories had never been born. And don’t even
think
about finding anyone who wrote in a language other than English.

On the other hand, it would be difficult to argue that the authors she selected don’t belong in the pantheon of the greatest mystery writers of all time. Robert Barr and his deliciously twisted plots, E. C. Bentley’s subtle, sly humor, Freeman Wills Crofts dismantling the perfect alibi, J. S. Fletcher and his mastery of mood, and Baroness Orczy with her outstanding characterizations all have produced irresistible stories.

An even richer vein has been opened for the stories defined by Sayers as “Mystery and Horror.” Once you have read Ambrose Bierce’s “The Damned Thing,” you will never forget it. Fortunately American writers made it into this section or else you would have been denied the excruciating horror (though nothing supernatural here) of “The Open Boat,” as well as Edgar Allan Poe’s little-known but haunting “Berenice.”

Not that English writers, who deserve their reputation of being particularly good at this sort of thing, have been ignored. One need merely hear the names Algernon Blackwood, J. S. Le Fanu, H. G. Wells, and W. W. Jacobs to shudder. And if you’ve never before read Saki’s dazzling short-short story “Sredni Vashtar” you are in for a memorable moment.

In addition to being one of the most accomplished and revered detective writers of the twentieth century, mainly for her novels about Lord Peter Wimsey, Sayers was a serious scholar of the genre and was instrumental, both by example and by her perceptive analyses of other authors’ works, in changing this important literary form, helping to imbue it with many of the elements that readers quickly came to expect and appreciate as a more modern form of storytelling.

The Second Omnibus of Crime
was published in the middle of what is referred to nowadays as the Golden Age of the detective story, that period between the two World Wars when mystery fiction flourished and began to be treated as serious literature by influential critics. Such masters as Agatha Christie, R. Austin Freeman, Anthony Berkeley, Crofts, Sayers, S. S. Van Dine, Ellery Queen, G. K. Chesterton, and John Dickson Carr all wrote during those years, and they helped elevate what had been mere puzzles into the realm of the fully developed novel.

Although not as well-remembered today as some of his more illustrious colleagues, Berkeley was respected and admired by them for his ingenuity and his dedication to improving detective fiction. He presciently wrote the following in his introduction to his acclaimed mystery novel,
The Second Shot
(published in 1930):

I personally am convinced that the days of the old crime-puzzle pure and simple, relying entirely on plot and without any added attractions of character, style, or even humor, are, if not numbered, at any rate in the hands of the auditors; and that the detective story is in process of developing into the novel with a detective or crime interest, holding its reader less by mathematical than by psychological ties. The puzzle element will no doubt remain, but it will become a puzzle of character rather than a puzzle of time, place, motive and opportunity. There is a complication of emotion, drama, psychology and adventure behind the most ordinary murder in real life, the possibilities of which for fictional purposes the conventional detective story misses completely.

Of course he was entirely correct. The detective fiction written during the past half-century or more has, for the most part, focused on character development far more than ingenious murder methods, clues, red herrings, tight alibis, and the other accoutrements of early detective fiction. Today, it is far more concerned with the “why” a crime was committed than the “how.”

The stories in
The Best Crime Stories Ever Told
were mainly written during the first three decades of the twentieth century and there are certain elements of which you may be certain.

The detective stories will be fair, otherwise Sayers would not have selected them. There are no secret doors or passageways, nor are there long-lost twin brothers who committed the crime. You will be expected to think along with the protagonist of the story and perhaps beat him to the solution. Written in the changing time of which Berkeley wrote, you will see well-executed plots but you will also encounter interesting characters. What you will
not
encounter is gratuitous, brain-and-blood-spattering violence, nor will you be permitted to voyeuristically spy on characters engaging in sexual activity that was, in the era in which the stories were written, regarded as private.

In all the stories you will experience the battle between Good and Evil. There are wicked people here. In the detective stories, you may regard it as a certainty that they will be caught and punished. In the others, those loosely connected as “Mystery and Horror,” well, nothing can be regarded as a certainty.

T
he name of the late Lord Chizelrigg never comes to my mind without instantly suggesting that of Mr. T. A. Edison. I never saw the late Lord Chizelrigg, and I have met Mr. Edison only twice in my life, yet the two men are linked in my memory, and it was a remark the latter once made that in great measure enabled me to solve the mystery which the former had wrapped round his actions.

There is no memorandum at hand to tell me the year in which those two meetings with Edison took place. I received a note from the Italian Ambassador in Paris requesting me to wait upon him at the Embassy. I learned that on the next day a deputation was to set out from the Embassy to one of the chief hotels, there to make a call in state upon the great American inventor, and formally present to him various insignia accompanying certain honors which the King of Italy had conferred upon him. As many Italian nobles of high rank had been invited, and as these dignitaries would not only be robed in the costumes pertaining to their orders, but in many cases would wear jewels of almost inestimable value, my presence was desired in the belief that I might perhaps be able to ward off any attempt on the part of the deft-handed gentry who might possibly make an effort to gain these treasures, and I may add, with perhaps some little self-gratification, no
contretemps
occurred.

Mr. Edison, of course, had long before received notification of the hour at which the deputation would wait upon him, but when we entered the large parlor assigned to the inventor, it was evident to me at a glance that the celebrated man had forgotten all about the function. He stood by a bare table, from which the cloth had been jerked and flung into a corner, and upon that table were placed several bits of black and greasy machinery—cog-wheels, pulleys, bolts, etc. These seemingly belonged to a French workman who stood on the other side of the table, with one of the parts in his grimy hand. Edison’s own hands were not too clean, for he had palpably been examining the material, and conversing with the workman, who wore the ordinary long blouse of an iron craftsman in a small way. I judged him to be a man with a little shop of his own in some back street, who did odd jobs of engineering, assisted, perhaps, by a skilled helper or two, and a few apprentices. Edison looked sternly toward the door as the solemn procession filed in, and there was a trace of annoyance on his face at the interruption, mixed with a shade of perplexity to what this gorgeous display all meant. The Italian as ceremonious as the Spaniard where a function is concerned and the official who held the ornate box which contained the jewelry resting on a velvet cushion stepped slowly forward, and came to a stand in front of the bewildered American. Then the Ambassador, in sonorous voice, spoke some gracious words regarding the friendship existing between the United States and Italy, expressed a wish that their rivalry should ever take the form of benefits conferred upon the human race, and instanced the honored recipient as the most notable example the world had yet produced of a man bestowing blessings upon all nations in the arts of peace. The eloquent Ambassador concluded by saying that, at the command of his royal master, it was both his duty and his pleasure to present, and so forth and so forth.