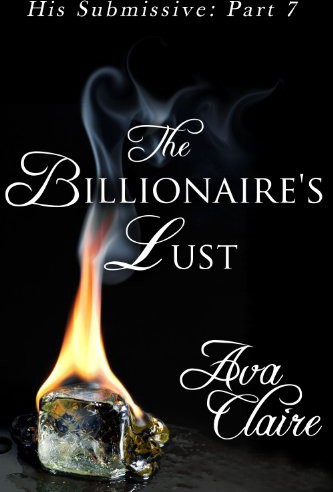 The His Submissive Series

The Billionaire’s Contract (Part One)

This eBook is licensed for your personal enjoyment only. This eBook may not be resold. If you would like to share this book with another person, please purchase an additional copy for each person you share it with. If you're reading this book and did not purchase it, or it was not purchased for your use only, then you should return to an online retailer and purchase your own copy. Thank you for respecting the author's work.

It was the second time in seven days that I would eat dinner by myself and probably go to bed alone.

Jacob was at the head of Whitmore and Creighton, a PR firm whose clie
nt list read like a Who’s Who of Hollywood and high society. I tried to convince myself that it was just work occupying his time. I’d seen the schedule, filled with back to back meetings. But it had been two weeks since I read the letter he wrote to his mother. Two weeks since I found out that the man I loved wanted to marry me--then changed his mind.

Two weeks since he started pulling away and spending more time at the office.

I dropped my cell on the granite countertop and went to the cabinet. I frowned when I saw that there were only a few crystal tumblers on the shelves. I pulled open the dishwasher, seeing rows of glass stems. My eyes flickered to the right where the recycle bin was filled to the brim with empty wine bottles.

I closed the door and swiped a tumbler, then filled it with water. I guess I was done self-medicating.

I was between a rock and a hard place. There was no way I could approach him about the letter without revealing that I'd betrayed his trust. Again. Even if I tried to explain and apologize, there was a risk that this would be it. The thing that pushed us off the cliff. The thing that would devastate us.

How much could he take? How many times could I disappoint him? If his letter was any indication, the answer was not much more.

My cell rattled to life on the counter and I launched to it, my heart beating a fever pitch in my ears. The sound became a whistle, and then it became nothing. It wasn't Jacob.

"What's wrong?" She didn't buy it for one second.

"Oh everything's great!" I lied, still not ready to give up the charade. I took a swallow of the water and forced a smile, like my best friend was standing right in front of me. Who was I kidding? If she saw right through me when I barely got two words out over the phone, I wouldn't fare well in person. There was no use pretending I had it together--not with Megan.

"I made dinner." Well as close to dinner as I’d get. I'd whipped up some Velveeta mac and cheese, steamed
veggies, and managed to not completely dry out two chicken breasts. "Jacob's pulling an all-nighter though so it looks like a table for one." My nostrils stung and I knew I was close to crying. Table for one.

And it was just what I deserved.

"Well that’s actually kind of great!” she said excitedly. “I wanted to know if you wanted to grab a cab and meet me at Lucy's?"

I perked slightly when I zeroed in on the sound of music and conversation weavin
g in and out of her invitation. “You’re at Lucy’s?”

"After the day I had I needed a margarita. And salt. And endless salsa and chips," she said with a chuckle that sounded off but I chalked it up to background noise.

I was so on board. I would have been down if she’d named a fast food joint instead of our favorite taco restaurant, Lucy’s Taqueria. Anything to get out of this house and away from the sad sight of plates languishing in the dining room. Anything to finally talk about the monstrous secret threatening to rip its way out of my chest.

I told her I’d be there in ten and swiped my purse from a stool in front of the bar, dropping my phone inside. After sliding my feet into a pair of flats and grabbing my jacket, I shut off the lights and made my way to the elevator. Downstairs, I gave the doorman a smile and didn’t even have to wave my arm before a taxi pulled up to the curb. I told him the address and settled into the seat, watching the city pass me by.

I pressed my lids together,
repeating ‘chips and alcohol’ over and over like a mantra, trying to combat the sadness that filled me like a poison.
Once you get there, you can climb out of this cab and unload all this drama. Get some clarity.

That thought was what kept me breathing and passing the driver the fare instead of getting him to make a U-turn and take me back to the apartment. Or one better--to Whitmore and Creighton where I’d finally tell Jacob about the letter and stop carrying the guilt like a shackle around m
y neck. I wanted to find out where we really stood instead of teetering on the edge, waiting for a gentle breeze to send us spiraling to our doom.

Lucy’s was always filled to the brim, the walls screaming as loud as the music that poured from the speakers. I scanned the restaurant until I saw Megan in a booth near the back, hunched over a margarita like you’d have to pry the drink from her cold, dead fingers.

I pulled my mouth into a smile that dropped just in time for my eyebrows to leap when I saw that she was on her third glass.

“Is there a holiday tomorrow I don’t know about?” I asked her, concern putting my issue aside. She was a pretty relaxed drinker, even back in school, so watching her pound ‘em back was like watching a pig take flight before my very eyes.

“Is there?” she said, looking at me like I would be the one to know such things. She fondled a button on the front of her cardigan then shrugged her shoulder, resuming sipping. “Just had a long day.”

Our waiter zipped to our table, dropping off a second bowl of chips and menu, saving her from my narrowed gaze.

"Could we get a pitcher of strawberry margaritas?" Her Cheshire like grin tugged so high at the corners that it looked painful. "I know my bestie is parched."

He let out a nervous chuckle and his eyes darted to me. I gave him a nod of approval and asked for some water.

"So nothing's wrong," I said, my voice lined with disbelief. "You were just craving Lucy's?"

"Mmhm," she said, crunching on a tortilla chip. As soon as she swallowed she went back to work on the rest of her drink. "Don't worry about me, Lay. I'm good."

Even though the table was a crime scene of evidence to the contrary, I didn't fight her. Not when I had something to drink about myself.

"I need to tell you something before I completely lose my shit."

Something flitted across her face. Nah…it was nothing. She was practically begging me to spill about Jacob, I could tell by the way she was studying me.

She gestured for me to keep going
. "Well, don't leave me hanging."

“I read a letter Jacob wrote to his mother.” I inhaled deep and exhaled. "I'm pretty sure he was going to ask me to marry him."

Her emerald glazed eyes widened and her jaw practically dropped onto the festive table. “He what?!”

I wasn’t expecting ‘mazel tov!’ or a suffocating hug. I hadn’t even expected to say it just once and have it go down since she was swaying back a
nd forth to some invisible mariachi band. But this wasn’t a happy kind of shock, the OMG that every girl hopes to share with their best friend when her special somebody pops the question.

She relaxed immediately, sighing with relief as she raked a hand through her red locks. “Oh thank God.”

She propped her chin on h
er palm, giving me a single glare that was full of no-nonsense. It was a look I was sure her students were familiar with.

“This doesn’t have anything to do with relief, Leila. This has to do with the fact that two weeks ago you were lying and kissing another guy.”

My eyes darkened. “I did
not
kiss Cade. He kissed
me
!”

“And I’m sure he put a gun to your head.” She dropped her timbre, whipping out her best Arnold Schwarzenegger. “And said, ‘Come with me and fulfill your barely masked attraction’.”

I pressed my lips into a line, biting my tongue. Clearly she was drunk and that’s why she thought this was one big joke. Sure, there really wasn’t anything ideal about this situation--like how Jacob hadn’t technically asked me and had doubts about our relationship—but we belonged together.

The waiter brought the pitcher over and I was surprised Meg didn’t leap from the table and kiss him. She refilled her glass then filled mine to the brim. I brought the straw to my mouth and sipped, hoping the chill of it would cool my anger. Nope. Still pissed.

“You can give me silent treatment all you want,” she sighed, “But I know the truth.”

I dredged my eyes to hers. “Is that right?”

“Yup,” she answered, not mincing the words she didn’t slur. “I get that you’ve been trying to convince yourself that you have no feelings for Captain America, but you’re lying to yourself.”

“I see. I guess Dr. Scott is in? Here to help me address my deepest, darkest desires?”

“They really aren’t that deep.” she shrugged. “You snuck off to have coffee with him, then you two kissed. I’d say that’s pretty out in the open, surface stuff. And before you go into who kissed who--” she added when I opened my mouth, “--what does it matter? You can’t marry someone when you’re running from yourself. How can you make a commitment to Jacob or expect him to make a commitment to you when there are all these unanswered questions?”

“I have answers,” I spat. “Ask me if I have feelings
for Cade. Ask me who I want a future with.”

“Can you be around Cade and not think about the kiss?”

But I wouldn’t admit that. Not to my bff who was trying to play amateur psychiatrist. Not to myself.

“Yes I can.” I said, unblinking. “I can be around him and not think about that
stolen
kiss.”

She dunked her chip in salsa, stirring it around slowly. “You answered my question when you didn’t reply as soon as I asked. If you have to think about it, then you’ve got some stuff to figure out.”

“I’ve already figured everything out,” I said tersely. “I choose Jacob. End of story.”

“No, I don’t think you do. I’m not sure if it’s because your comprehension is mush from your current vacay in Margaritaville or because you don’t want me to be happy, but I’m not going to sit here and explain myself to someone who can’t even hold onto a single guy.”

I covered my mouth, hoping, praying that she was too busy crunching on chips or the music snuffed out what I’d said.

But the red in her face, the hurt set of her lips and the tears gathering in her eyes proved I’d hit my mark.