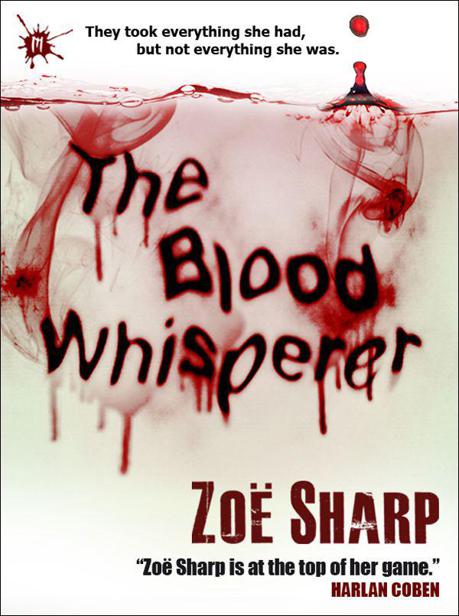 The uncanny abilities of London crime-scene specialist Kelly Jacks to coax evidence from the most unpromising of crime scenes once earned her the nickname of The Blood Whisperer.

Then six years ago all that changed.

Kelly woke next to the butchered body of a man, the knife in her hands and no memory of what happened.

She trusted the evidence would prove her innocent.

Now released after serving her sentence for involuntary manslaughter, Kelly must try to piece her life back together. Shunned by former colleagues and friends, the only work she can get is for the crime-scene cleaning firm run by her former mentor.

But old habits die hard. And when her instincts tell her things are not as they appear at the scene of a routine suicide, she can’t help but ask questions that somebody does not want answered.

Plunged into the nightmare of being branded a killer once again, Kelly is soon fleeing from the police, Russian thugs and a local gangster. Betrayed at every turn, she is fast running out of options.

But Kelly acquired a whole new set of skills on the inside. Now street-smart and wary, can she use everything she’s learned to evade capture and stay alive long enough to clear her name?

“The Blood Whisperer is a cracking, compulsive read: once you've read the electrifying first few pages, you’ll probably develop intense feelings of annoyance towards anyone or anything that takes you away from it and the wonderful, gutsy, spiky heroine. I loved every word of this brilliant, mind-twisting thriller and even yelped out loud at one of the genius twists.”
Bestselling crime author, Elizabeth Haynes

“Zoë Sharp is one of the brightest of the new generation of British crime writers.”
Stephen Booth

“If you don't like Zoë Sharp there's something wrong with you. Go and live in a cave and get the hell out of my gene pool! There are few writers who go right to the top of my TBR pile—Zoë Sharp is one of them.”
Stuart MacBride

“Zoë Sharp is going to be a superstar.”
Jon Jordan, Crimespree magazine

THE
BLOOD WHISPERER
Zoë Sharp
For Derek and Jill
who've helped to keep it all together
and
Sarah and Tim
who've been there since the beginning
www.ZoeSharp.com
Cover design by
www.NuDesign.co

She wakes to the smell of blood.

It saturates the air to lie metallic across her tongue—so fresh-spilt it has not had time to spoil.

She knows the scent well enough to be calm and yet also terrified. It is not that she is squeamish but the implications are clear to her.

What the hell is happening here? And where
is
here?

She gradually returns to herself, realises she is lying face down on a hard surface. Her whole body feels gripped by the aftermath of a fever. Her head is turned slightly to the side, legs splayed as if to mimic running and arms twisted behind her. The position is awkward, like she dropped in mid-stride or was flung there. She flexes her wrists half expecting to find them bound but she is not restrained.

She takes a moment to examine if this makes things better or worse.

In fact nothing comes readily, neither awareness nor memory.

Mentally she fumbles backwards for her last clean recollection. It remains blurrily beyond reach.

That alone is enough to start the panic forming a bubble in her chest. It compresses her heart, squeezing her lungs against her ribcage so she can hardly breathe.

She forces her eyes open.

From this perspective the room has tipped sideways. It seems familiar but she doesn’t recognise it. Maybe the bloody pool seeping across the boards towards her has something to do with that.

The encroaching tide jolts her out of lethargy. Her adrenal gland fires a staccato burst into her system and she flinches from the shock of it, tries to roll away. Instead she flops raggedly onto her back, gasping. It’s a start but not much of one.

Her eyes slide closed again and she discovers her limbs are not yet her own. They refuse to know her, fighting every attempt to control them. She growls in frustration-laced fury.

And all the time the smell of the room overloads her senses. She has the educated palate of a connoisseur. Underneath the sharp tang of blood she detects the lingering slurry of fear.

The kind of fear humans embrace when there is nothing else left to them.

Her own fear motivates her eyes to reopen. They do so with reluctance akin to peeling a limpet from a tidal rock.

The room is still there. She’d been hoping to blame some kind of waking nightmare but this is real.

A crowd of images jostle her, elbowing for supremacy. She grasps the analytical part of her brain by its scruff and shakes it into concentration. Sluggishly she notes the blood pool leads away from her.

She lies still for a moment and monitors her own body as the extremities slowly come back online. She aches right down to the roots of her hair as if from a beating but as far as she can tell there’s no specific damage.

So the blood isn’t mine.

Of course it isn’t hers, she reasons. She can recite the facts as well as anyone—that the human body holds between three-point-five and five-point-five litres. A loss in excess of forty per cent is almost invariably fatal and experience has shown her exactly what that kind of exsanguination looks like.

To have this amount of blood let must surely mean . . .

Her heart leaps into her throat and bounces there.

With a grunt of outright effort she makes it up onto one elbow. The room sways and distorts alarmingly before it steadies.

Progress, of a sort.

What she sees next is not progress of any sort.

The body is no more than two metres away. Blood haloes around it and edges ever closer as if seeking a living host. It leaches from a dozen ragged slits in clothing and skin.

The face is turned towards her, features bisected by a diagonal slash from cheekbone to chin. The lips are peeled back in the parody of a sneer.

Even in death the eyes are flatly accusing.

In the past she has seen the aftermath of violence too many times to count, but this? This finally overbalances her. She scuttles backwards instinctively from the sight of it, a moan of horror and despair escaping her.

Pure visceral emotion rises along with bile. She feels her stomach give a lurching heave and she reaches to cover her mouth—an instant reflex to avoid contaminating the scene.

It is only then she realises she is clutching something in her right hand so tightly her fingers are locked around it.

She pulls back, staring dumbly. It takes a long time for her to register she is holding a knife.

The blade catches the light and gleams darkly wicked.

It is blooded to the depths.

And so is she.

Tyrone wasn’t fazed by death. But as he shouldered open the door the only thing on his mind was getting the job done and getting out of there fast.

It wasn’t as though he couldn’t hack it—he could wade through gore as well as anybody. It was just something about
this
job was freaking him out.

He bent to put down the plastic gallon-drum of chemical enzyme cleaner onto the bathroom floor. As he did so he felt the back seams of his disposable Tyvek oversuit start to rip like they always did.

They were supposed to be one-size-fits-all but that didn’t take account of the fact he was six-foot-plus and well into his sports. He’d shot up while he was still at school and now at nineteen he’d finally grown into his shoulders. It looked good but didn’t help him find an oversuit that fit.

Still, at least they didn’t have to wear masks for this one.

Tyrone inhaled cautiously just to be sure. The only smell was a kind of sticky sweetness with only a hint of sour at the back of it, like emptying the kitchen bin in the flat for his mum
only just
before what was in it went bad.

That was the upside of gunshot suicides. They made so much noise they were found quick and there wasn’t time for decomp to set in. The quiet ones—where nana died in her bed and was left to seep into the mattress for weeks before her loving family even
began
to wonder—now they
were
bad news.

He straightened and took in the bathroom.

Man, this place is huge.

He glanced to where Kelly Jacks stood across the other side of the room. She was far enough away that if he stretched out his arms all the way he still wouldn’t be able to touch her.

Kelly’s suit didn’t fit any better than his. She always had to roll up the cuffs and the ends of the legs and the crinkly material ballooned round her narrow waist. On just about anyone else it would have looked like some kind of clown. Funny thing was, he thought Kelly looked great whatever she wore.

Tyrone opened his mouth ready to make a snappy remark, a joke. But something about the way she stood there, staring at the place where it all went down, had the words dying on him.

He moved across, careful not to slip on the Italian tile. The boss made them wear plastic booties for work. Tyrone thought it made him look a right prat but he’d soon found that trying to scrub God-knows-what out of the treads of his boots at the end of the day was far worse.

Small hard lumps crunched under his feet. He didn’t have to look to know they were fragments of bone and teeth. When he’d first started this job he’d been surprised at the distance stuff travelled from this kind of head wound.
Man, how those suckers could
bounce
on a hard surface like this.

But at least the tile meant not too much was wedged into the walls. Brain sludge set like cement and scraping it off fancy wallpaper was a right pain.

Kelly raised her head but she didn’t really see him. A frown carved twin dents between her eyebrows.

She only just came up to Tyrone’s chin and he’d felt like a big brother since they’d been teamed up, even though at forty she was old enough to be his mum.
Hell, the way some of the girls round home get themselves knocked up soon as they hit puberty, she could have been a grandma by now.

Not that you’d know how old Kelly was, not really, with that short choppy haircut, clear skin and the little diamond stud through the left-hand side of her nose. Amazing she looked so fit what with all she’d been through.

Kelly shook her head, murmured, “There’s something not right here.”

Tyrone peered over her shoulder down into the blood-swilled bathtub with the exploded hole in the tiles at one end and the cast-off spray across the snazzy window blinds. There was something so
careful
about it made him shiver.

“Well she puts on her best gear, climbs into the empty bath with one of her old man’s rifles and blows her brains out, yeah?” he said trying to nudge Kelly out of introspection. “’Course there’s something ‘not right’ about that.”