Read The Bottom of the Jar Online

The Bottom of the Jar 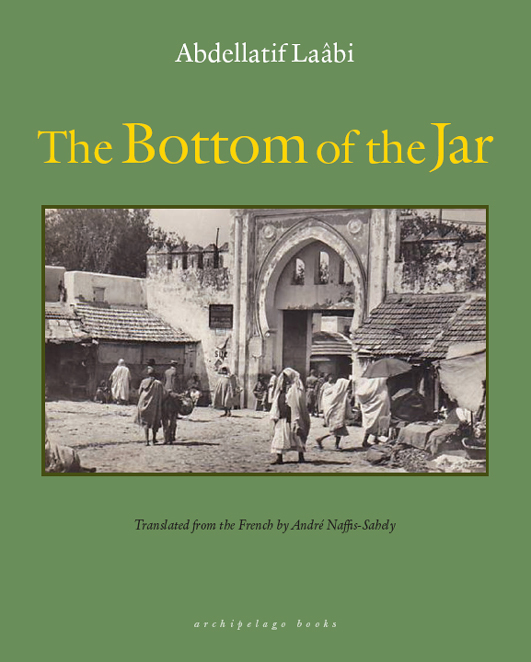 The
Bottom
of the
Jar

Translated from the French by AndrÃ© Naffis-Sahely

All rights reserved. No part of this book may be reproduced or transmitted in any form without the prior written permission of the publisher.

The publication of
The Bottom of the Jar
was made possible with support from Lannan Foundation, the National Endowment for the Arts, the New York State Council on the Arts, a state agency, and the New York City Department of Cultural Affairs.

This work received support from the French Ministry of Foreign Affairs and the Cultural Services of the French Embassy in the United States through their publishing assistance program.

The
Bottom
of the
Jar

I
WAS IN
Fez when the fall of the Berlin Wall was announced. That morning, the family had come together at my father's house, and the television was already on. But no one around me was interested in those historical images scrolling past on the screen.

If Europeans are obsessed with background music, Moroccans have invented the background image, and without skimping on decibels either. In our home, clamor and din seemed to be inextricably mixed with our joy at coming together as a family.

Oblivious to these events that were convulsing the world, our little tribe was focused on a far more pressing topic: the inexplicable and continuing absence of my older brother. Over the years, Si Mohammed had become a subject of controversy.

He had wanted to be admired ever since he had come into this world. At seventeen, after a brilliant career as a student, he took a position in the civil service. Then he got mixed up with the colonial authorities.
Here, ideas began to differ. After his nuptials and ill-starred wedding night, all sorts of trials ensued â a divorce, another marriage, more trouble with the authorities (this time with the newly independent Moroccan administration) â all of which were perceived as being the outward manifestations of an intemperate personality, against which one had to guard oneself. Whatever evils my brother endured, he paid in kind with an incredible indifference toward our family affairs.

I should say that I was no stranger to the direction the conversation had taken. After the rosaries and jeremiads over issues of health, talk began to falter, when â the devil take me â I let slip the following question: “Any news of Si Mohammed?”

My little niece, malicious and as cute as one could wish for, replied tit for tat by repeating the refrain of a then-fashionable song: “No letters or
phone calls
!”

“You and your itchy tongue,” her mother reprimanded her. “One ought to rub your lips with paprika. Shut up when your elders are speaking, you little devil!”

My sister Zhor, who was wisdom personified, breathed out a sorrowful sigh and served up one of her ditties: “What can one do? So goes the world.”

My brother Abdel, usually quite reserved, got heated up and passed the following sentence: “His heart is dead!”

“Come now, come now,” soothed my younger sister, Hayat. “He too has his problems. The poor thing, his health has abandoned him. And things are not well with his new wife. There is no peace in life.”

Such self-indulgent talk didn't please my sister-in-law, who possessed a remarkable vitality and was known for her clear-cut opinions.

“Who doesn't have any problems? Come on! It has been years since he's come to visit Sidi,” which is what she called my father. “Even dogs don't forget their parents.”

My father, whose health and sight were failing, but not his hearing â let alone his conciliatory ways â let out a thin trickle of words: “Nobody wants to be feather-brained. May God endow him with wisdom and guide him onto the right path. I love every one of my children, and he is no exception.”

The silence we kept so that my father's blessing could enter our bodies, and which hovered above our heads like a protective cloud, allowed me to lift my eyes toward the wall where a portrait of Si Mohammed was hung. His face is as vivid now as it was forty years ago.

In my mind, Si Mohammed was more or less exactly as the painter had depicted him. This painter, whose studio was deep in the heart of the Medina, never used models, preferring to work from a single photograph, usually that on the subject's ID card. The greater care he put into correcting nature's discrepancies, doing his subjects more justice than had otherwise been allotted to them, the more his art was appreciated. One could say that he had the foresight to realize plastic surgery could be achieved in more ways than one. In this way, Si Mohammed's premature baldness was advantageously corrected. The few surviving stray hairs on his high forehead were replaced by a wavy tuft. Suddenly, his once prominent nose was chiseled down, refined. His bulging eyes were tucked neatly into their orbits. His lips seemed to grow more delicate. Only his chin had for some reason been reproduced with a degree of realism. All in all, the portrait managed to be both frumpish and alive. That's what it takes for images to move up the incoherent ascent of time.

I
AM SEVEN
years old, maybe eight. Fez. In the district called Spring of Horses, the house where I was born. An Egyptian. This is what we called the little houses that flanked the vast mansions of the wealthy. The houses each had their own independent entrances that were
accessed via a ladder. This layout assured a certain sense of discretion fit for a bachelor's pad, which the owners could either rent out to poorer families or else keep in their possession, where they could organize soirÃ©es where the devil would be far from being stoned.

Ten of us would crowd into our Egyptian, and I believe I can say we were happy.

Si Mohammed burst on the scene, an old illustrated Larousse in his hands. He would pace arrhythmically around the patio, reading out the definitions of words. “
Avanie
: to give offense, to humiliate.
Avarie
: of Arabic origins. Damage done to a ship or the goods being transported on it.
Avatar
: metamorphosis, transformation . . .”

My recollections do not extend beyond the letter
A
. But I know that Si Mohammed had put it into his head to learn all of the difficult words in his dictionary by heart â and in alphabetical order. I was in awe.

C
ROSS-FADE
. Two years later. Si Mohammed has picked up his high-school diploma and has been awarded a medal by the Alliance FranÃ§aise for the high standard of his essays, where he'd let drop a quote from Marshal Lyautey's book
Paroles d'action
. Haloed by scholastic distinctions, he passed his civil service examination and became an operating officer for the postal and telecommunications services. Following which he was posted to Tiznit, in the deep south of the country. This was the time of the “troubles” in Morocco. Resident-General Guillaume had threatened to make every Moroccan who opposed the protectorate eat straw â and a plot had been hatched to conspire against the sultan of the country, Mohammed ben Youssef, to overthrow him.

The new grave. My mother had come back to the house. She had brought a bag of walnuts. Ecstatic, my sister Hayat and I rushed to find a hammer with which we could open the nuts, when a cry burst forth from my mother: “My son, my son, my son!”

Arctic Dawn (The Norse Chronicles Book 2) by Karissa Laurel
Move the Sun (Signal Bend Series) by Fanetti, Susan
The Lady and the Falconer by Laurel O'Donnell
Lives We Lost,The by Megan Crewe
To Be Seduced by Ann Stephens
Nothing Is True and Everything Is Possible: The Surreal Heart of the New Russia by Peter Pomerantsev
All I've Ever Wanted by Adrianne Byrd
Bug Out! Part 6: Motorhome Mayhem in the Rockies by Robert Boren
Rosemary: The Hidden Kennedy Daughter by Larson, Kate Clifford
Team Genius: The New Science of High-Performing Organizations by Rich Karlgaard, Michael S. Malone