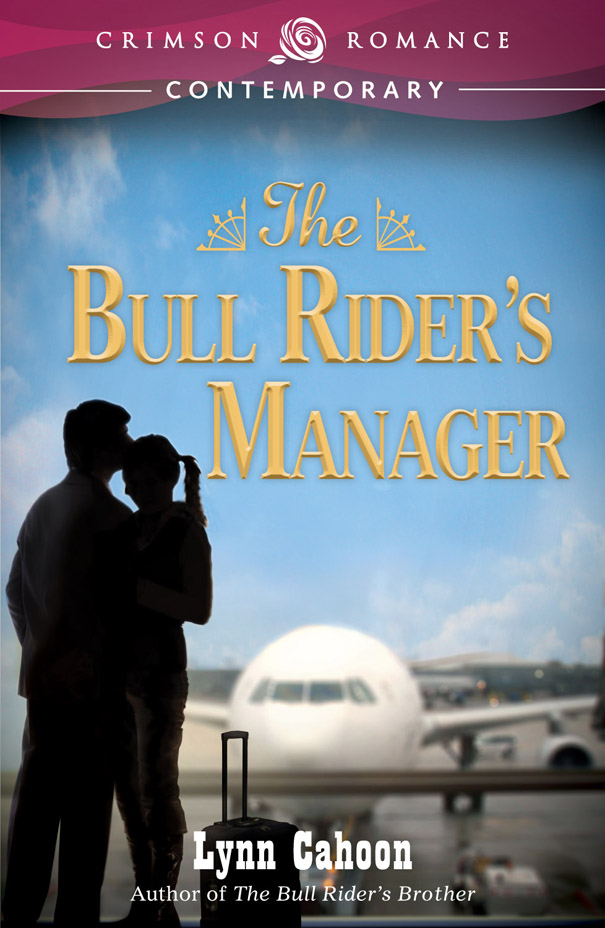 Barb Carico’s life is all about business. Now that her best friend has tied the knot with her high school sweetheart and Barb’s new partner, she’s busier than ever. Managing Jesse Sullivan’s career and public persona can be a handful. Add in an aging mother who goes through home health nurses like candy, Barb’s hanging on the edge.

Her one salvation? Hunter Martin, prodigal son of Martin Family Dairy and, hopefully, Jesse’s next sponsor. A promise his father had already made before Hunter took over the public relations department. After his brother’s death, Hunter’s become an instant dad to his seven-year-old niece. More responsibility. For Hunter, the rodeo weekend with Barb is the perfect excuse to relax.

When their dinner turns into drinks and then a quick trip to a Vegas wedding chapel, both Barb and Hunter agree their nuptials were a mistake. A mistake they consummated the next evening. As soon as they’re home, the marriage will be annulled. That’s what they both want. Or at least what they tell themselves.

Upon their return, Hunter finds that distant relatives are suing him for custody of his niece. The only way for him to keep custody is to design a life that matches the promise of a perfect family. For that, he needs Barb to stay married to him. Hunter would give her anything to go along with the charade.

Barb doesn’t know anything about being a wife or mother but she needs one favor. A favor she’ll trade her lifestyle, independence, and even risk her heart to make come true.

To my BFF and writing partner, Laura Bradford. Thanks for pushing me to finish a book, any book.

And to my own Bella. I miss you little girl.

If flying was hell, waiting to fly was purgatory. Their plane should have taken off an hour ago. And even though they were on hold, Jesse Sullivan still hadn’t graced the airport with his presence. Barb dialed Jesse’s cell again and immediately got his answering message. “Damn, Jesse — where are you?”

“No luck?” Hunter Martin, prodigal son of Martin Dairy Empires — and potential sponsor for her perpetually late client — opened his blue eyes and looked at her.

Barb had thought the man had been asleep when she’d pulled out the cell one more time. She pasted on a smile she didn’t feel. “Just his voice mail. Maybe he’s stuck in traffic?”

Hunter raised his eyebrows. “In Boise?”

“It happens,” Barb shot back. “He’s been staying at his brother’s spread up near Lucky Peak so maybe a logging truck accident slowed him down.”

“It could happen. Those trucks fly on those narrow roads.” Barb sighed. “I think you’re stuck with me for the flight. I don’t think Jesse will make it.”

“I’m not going to complain.” Hunter’s smile was slow and sexy. He closed his eyes again. “Shake me if they announce our flight. I didn’t get much sleep last night.”

Barb smiled.
I bet you didn’t.
Hunter Martin was known in Boise social circles as a player. Or at least he had been. All Barb really knew about the thirty-two-year old bachelor was that he liked the Country Star bar — well known for its line dancing classes and generous beer prices — better than the upscale places downtown. She’d seen him at Country Star a few years ago and man, the boy could swing. In all her years around the rodeo, Barb had never been able to relax enough to let her partner lead her around the dance floor. But she felt the music, even if her dancing would put her on a reality show for the Worst Dancers in America.

Rumor had it that Mr. Martin must be involved because he’d been absent from his usual bar stool for months. Barb snuck a glance at his left hand. No ring yet. Although that didn’t mean anything. He still could be engaged.

Barb wished she’d just taken a direct flight to San Francisco. But since she’d had to come up to get another caretaker hired and settled with Mom, she’d jumped at the chance to host a potential new sponsor for the weekend. Martin Dairy had big promotion pockets. Or at least that’s what was rumored. And the company loved to sponsor bull riders. Jesse better not screw this up.

Going into partnership with James, Jesse’s brother, and becoming Jesse’s manager when James had wanted to get off the road to run Hudson’s Spa with Lizzie, his new wife, had seemed like a no brainer. James, Lizzie, and Jesse had been friends since high school in Shawnee. And Barb had managed cowboys for years. She’d taken newcomers from small town rodeos and gotten them into the finals in Las Vegas in no time. But Jesse already had a champion belt buckle. And acted like it. The man was infuriating, at best.

Hunter’s pocket started to vibrate and Barb jumped back, hoping the man hadn’t caught her staring.

Hunter pulled out his Blackberry. Bringing the phone in front of his face before opening his eyes, he squinted at the display. Frowning, he stood. “Sorry, I’ve got to take this.”

Barb watched the man walk away. Cowboy casual in Wranglers and a cotton button-down shirt, Hunter could have been her wayward bull rider. His dark hair had just the right curl, making Barb’s finger’s itch to play with it. The man would give any of the rodeo guys a run for their money in the body department, even though Barb knew Hunter spent his days in a high rise in Boise, managing the large dairy operation. Martin Dairy didn’t just own one dairy farm in the valley. Rumor had it that old man Martin wanted to wipe out the competition and be the only milk producer around. They’d bought out the cheese factory in the next town a few years ago, and now Martin Dairy brand cheese was on supermarket shelves nationwide.

Barb sighed. She could imagine the fun Hunter would be if he weren’t a potential sponsor. And if she weren’t Jesse’s manager. She’d just have to put the drool worthy man out of that part of her mind. Just for the weekend. She shook her head. She needed a life outside the rodeo. A man she could come home to and he’d massage her shoulders. Someone she could tell her dumb stories to who’d laugh and understand. Someone who didn’t mind that she traveled every weekend from late April to December. At twenty-six, she felt like the old maid of the group, especially since Lizzie and James tied the knot.

Her cell phone buzzed. Without glancing at the display, she answered. “Where are you?”

“In my living room, why, was I supposed to be somewhere else?” Her mother’s voice quivered.

Barb leaned back in her chair. “No, Mom. I just thought you were someone else. What’s going on?”

Her mother’s voice dropped. “There’s someone in the house.”

“Cassie. Her name’s Cassie.” Barb watched Hunter pace the walkway, a smile on his lips. Yep, there was a woman in the man’s life. She wondered what the mystery girlfriend thought of him taking a weekend alone to go to a rodeo?

“How do you know her name?” Lorraine Carico hissed into the phone. “She just showed up with bags like she was moving in my house.”

“Mom, she is moving in. She’s a trained nurse’s aide and she’ll help you with the house. You’ve been saying you need someone to help around the house.” Barb sighed. This wasn’t the first time she’d told her mom why Cassie was there. In fact, this wasn’t the first live-in nurse’s aide that Barb had hired to help her mom. But each time, the transition was getting harder and harder.

“I hired her yesterday. Remember, she came to the house and we talked to her? She barrel raced as a teenager. She went to high school in McCall.” Barb tried to clue her mother in to the conversation and why Cassie had been such a great match. Why Barb hoped her mother’s stories about how she’d dominated the rodeo queen circuit when she was young wouldn’t bore the young woman to death.

“Well, if she barrel raced, I bet she’d like to see my trophy room.” Her mom’s voice sounded stronger.

Barb noticed jean clad legs in front of her. She looked up into the concerned eyes of Hunter. Cocking her head, she covered the phone and asked, “What’s going on?”

“They just called our boarding group.” Hunter nodded to the gate where people were lining up.

“Mom, I’ve got to go. The plane is boarding.” Barb sighed. She glanced toward the line. Business had to come first, at least today, but she wanted to rent a car and return to her mom’s house.

“Plane? Where are you going?” Lorraine’s voice turned into a sob. “Why are you leaving?”

“I have to go to work.” Barb stood up and grabbed her briefcase with her tablet and the tons of contracts she needed to review for her guys. Barb heard a gentle voice asking her mother to let her talk to Barb.

Cassie’s cheerful voice came over the phone. “Sorry, I’ll get her calmed down. Have a great flight. Man, I wish I was going to Vegas. I hear it’s a great party.”

Barb smiled. “I don’t seem to have time for the party piece anymore. Thanks, Cassie.” She clicked off the phone and followed Hunter to the gate. Countryside Homes had a room on reserve for her mom. Switching caretakers was getting harder and harder. Her mom was taking longer to acclimate. Maybe Barb had made a mistake in trying to stretch out the money with just one more at home caretaker. Maybe it had been time. Exhaustion racked her body. She shouldn’t have to be making these decisions, not now. This was supposed to be her time.

Barb squared her shoulders. “You know family. And since I’m an only child, there’s no one to share the wealth with … ” For the second time in less than thirty minutes, Barb pasted on her made-for-television smile. “No worries. Now, do you want the window or aisle seat?”

Hunter watched her for a few minutes then answered, “Whatever you don’t want. I’m easy.”

Barb hoped that was true. If Martin Dairy came on board as Jesse’s sponsor and Jesse pulled it together enough to win the championship again this year, she could afford to put her mom in Countryside. Then maybe Barb wouldn’t worry so much about her.

And maybe pigs would fly. She glanced around the boarding aircraft for a pink pig, waiting to take her flight to Nevada, and giggled.

Hunter snuck a peek at the woman sitting next to him on the plane. He couldn’t believe how beautiful she was. Flame red hair, porcelain skin, and a killer body. When she smiled at him, man, his heart melted. Or would have if he had a heart, he reminded himself. Kati owned that piece of real estate — or at least she did until she went away to college. But that was years away.

In an odd way, Barb reminded him of his spit-fire niece. Kati and the older woman looked nothing alike, but both had that twinkle in their eyes. The one that showed up just as he realized he was being played.