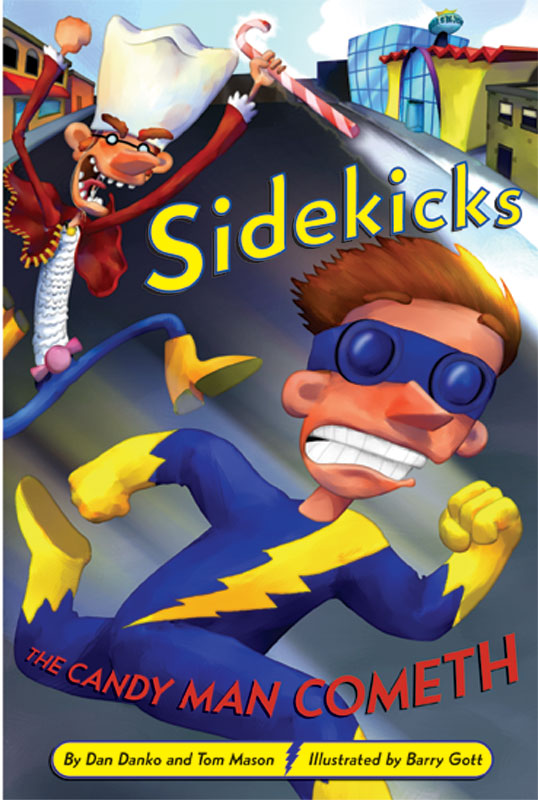 The text for this book was set in Bookman, and the display type is Bernhard Gothic Heavy Italic. Book design by Billy Kelly

Chapter One: Bonding with Pumpkin Pete

Chapter Three: In the Basement of Evil

Chapter Ten: I Have a Headache!

Chapter Eleven: Speedy to the Rescue!

Chapter Thirteen: The Candy Man Can

Chapter Fourteen: “Where Is Everybody?!”

Chapter Seventeen: “I Don’t Even Want to Know”

Chapter Eighteen: Why I Hate Charisma Kid (a.k.a. Mandrake Steel)

Chapter Twenty: What Happened Next That Wasn’t Very Pretty

To
Ginger, the best sidekick in the world (except for Boy

To Yaela, Who Lets Me

Do This for a Living! 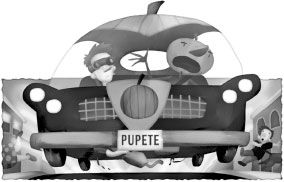 “What was your last sidekick like?” I asked Pumpkin Pete.

“Pfft. Try everything. From the moment that kid put the first coat of wax on the Pumpkin-mobile to the day he ironed my last Super Shirt of Pumpkinness, all that kid did was whine.”

“Oh, I don’t know, really,” Pete answered. “He wanted me to teach him stuff and help him learn things. Always begging for me to tell him about the Mysterious Ways of the Pumpkin and blah, blah, blah. As if just
anyone
could be allowed into the Obscure Inner Circle of the Pumpkin.” Pete shook his head again.

“Who
is
allowed in the Obscure Inner Circle of the Pumpkin?” I asked.

“Anyone with a pumpkin for a head. And if you ask me, the bigger, the fatter, and the oranger, the better,” Pete replied. “Or is it ‘orangier’?”

“But Pete,
you’re
the only one in the world with a pumpkin for a head,” I reminded him.

“Yeah, I know. The Inner Circle meetings are real dull. That’s why I never go. But I’ll tell you this much, my life got a whole lot easier the day I kicked that kid to the curb,” Pete said.

“I was just driving along and the kid was, like, ‘Blah blah blah blah! Whine whine whine.’ So I just pulled over the Pumpkinmobile and kicked him out!” Pete explained.

All of this was suddenly sounding familiar. “What kind of powers did he have?” I asked.

Pete wrinkled his nose and thought for a moment. “He...uh...he had the power to give me a headache. I really don’t remember. I never talked to him much.”

“Because if I said something to him, then he’d probably say something back to me, and then I’d probably have to answer and a conversation might break out,” Pete said in a condescending tone, as if he were explaining the obvious. He stopped and scratched his hollow pumpkin skull. “What was his name again? It was something like Spotty or Spuddy.”

“Speedy?” I asked, realizing that my suspicions were correct.

“WHAT!? I thought I kicked you out of the Pumpkinmobile an hour ago!” Pete hit the brakes.

As I stood on the curb and watched Pumpkin Pete zoom away in the Pumpkinmobile, I couldn’t help but wonder if this was some kind of test. You know, drop your sidekick-in-training in the middle of nowhere and see how long it takes him to get home.

But then I remembered the last time Pete did this. Man, it took me days to get home from Pluto, and boy was it cold! My parents were so upset when I finally got back to Earth.

“I don’t care if you did stop the Geduldig invasion fleet at Pluto! The next time you’re planning on leaving the solar system, you darn well better call home to get permission first!” my mom scolded when I came home.

“Technically, I didn’t leave the solar sys —” I didn’t finish the sentence. My mom gave me The Look. Anyone who says parents don’t have super powers has never experienced The Look. It can see through closed doors, it can spot a lie a mile away, and it can silence you faster than Captain Haggis on the bagpipes. Actually, Captain Haggis on the bagpipes doesn’t silence you so much as make you wish
he
were silent.

“And really, son,” my dad joined in, “it’s at times like this that I really don’t think being a superhero sidekick is such a good idea. Your mother and I were worried sick. Put yourself in our shoes, son. We don’t know if you’re fighting alien invasions on Pluto or hanging over some mad scientist’s mutated leech pit.”

“I know, Dad. I’m sorry. It’s just that sometimes when I’m saving the world and all, I don’t really have time to call home.”

“Your brother
always
has time to call home no matter how busy
he
is!” Mom chided.

“But Mom! Brad’s just a florist! He doesn’t have to punch evil in the face!” I said.

“How would you know? Have you ever had to protect a strawberry plant from a pill bug? Have you?” my mom asked.

“No... but I did defeat the giant robot that was trying to —”

“Look, son,” my dad said, “we’re not trying to be hard on you. It’s just that being a superhero sidekick doesn’t mean you can forget about your other responsibilities. Now I know you saved the planet from being ‘enslaved’ by evil Geduldig overlords and ensured that your mother and I can peacefully live out the rest of our lives without the fear of working in their salt mines until we die of starvation, but even though you were the lone reason we averted an ‘interstellar war’ that would’ve resulted in the ‘deaths of millions of innocent lives,’ I’m still going to have to revoke your TV and phone privileges for two weeks.”

“Fine!” I said, throwing my arms up in the air. “Next time I’ll just let the alien hordes win!”

I threw down my sidekick goggles and raced up to my room. About ten minutes later there was a knock on the door.

It was my dad.

“It’s tough being a sidekick, huh?” he asked. “Not for the other sidekicks,” I replied. “I mean, between Pumpkin Pete and you and Mom...”

Ever since Pete accidentally fired the League of Big Justice’s Disintegration Ray of Zappiness and nearly hit me, I swear, Dad just won’t let it go.

“That we did, but we never said we wouldn’t
worry
about you. Almost every day that I watch you head off to the League of Big Justice, I can’t help but think I made a mistake.”

“So you don’t want me to be a sidekick? You’d be so proud if I was just Junior Assistant Florist, wouldn’t you?!”

I couldn’t believe it! He’d rather I was a florist than a superhero? For a second I hoped that my parents had been replaced by evil clones and this was just one small cog in some giant evil plot to destroy the League of Big Justice and the Sidekicks. Sure! Replace all of their parents with evil clones who would tell them they’d rather they were florists than superheroes, and suddenly the entire League of Big Justice calls it quits and opens one giant flower shop.

Boy, would evil laugh on
that
day. And it wouldn’t just be because King Justice was selling daisies.

“You think I love all this, too?” I grumbled. “It totally sucks that I can’t tell anyone I have super powers. Do you know how popular I’d be?”

“We all have to give something up in our lives, son. Some more than others...”

We all have to give something up?
I thought to myself. Yeah. Right. What’d Dad ever have to give up? He’s an accountant, for gosh sakes! He’ll never understand. No one does. Being my age can really suck. Living a secret life and lying to my friends and getting grief from my parents about it
always
sucks.

And nearly getting devoured by mutant leeches? I don’t
even
want to tell you how much
that
sucks! Because...uh...see... leeches, they suck.

My life used to be normal. The only lecture I ever got from my dad was about being nicer to my mom and not trying to break the parental-lock passwords on their Internet account. But that was before the day I ran at 27 miles per hour into a wall. I woke up an hour later and realized two very important things:

Running into a wall at 27 miles per hour really, really hurts.

I, Guy Martin, had super powers.

I also learned that the one thing more important than seeing how fast I could run was learning how to stop. So I guess that means I learned three important things that day.

Later on I learned a very important fourth thing: nearly getting devoured by mutant leeches sucks, but I think I already told you that.

But everything changed that day. Rather than having an awesome ability that would make me the most popular person in school, it became an awesome secret — something I had to hide from everyone. I never knew being a superhero would be such a burden.

I mean, forget about that fact that some nut or alien was always trying to kill you, and just think about how rotten it would be knowing that you might be the
only
thing standing between Earth’s survival and eternal enslavement in the salt mines of Geduldigopia.

And let me tell you, the weather on Geduldigopia is totally rotten!

That’s a lot for a kid to take in!

Don’t get me wrong. I love being a sidekick. Sure, my League of Big Justice superhero sponsor, Pumpkin Pete is...well... not your traditional hero. And I’m not just saying that because he has a big, fat, orange pumpkin for a head. Let’s just say he’s heroically challenged and leave it at that.

I mean, now I can run more than 100 miles per hour and I get to fight alongside the greatest superhero that ever walked the earth: King Justice, founder of the League of Big Justice. Well, I don’t always fight
alongside
him. More like behind him. The lucky sidekick who gets to fight alongside King Justice is Charisma Kid.

And get this, in his secret identity, Charisma Kid and I go to the same school. His real name is Mandrake Steel.