The Chance You Won't Return 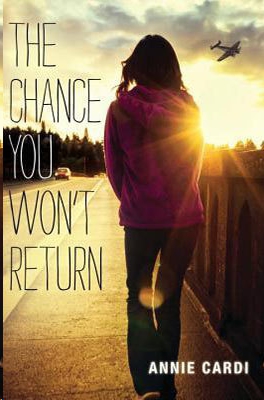 Trouble in the air is very rare. It is hitting the ground that causes it.

I was sneaking a twenty-dollar bill from Mom’s purse when I saw the empty space where the picture should have been. It was of my parents on their wedding day, and they were laughing under a dogwood tree. Mom’s hair was pulled back in a neat bun, a style she couldn’t wear now, with her hair so short. Dad was clean-shaven in the picture, which always looked weird to me. His rented tux was a size too small; it showed in the arms and shoulders. They were twenty-two years old. I used to try to guess what they were laughing about. Whenever I asked, Mom said she couldn’t remember.

Mom’s ChapStick, an overdue library book, a dusty box of Kleenex — everything else was there. I pocketed the twenty and inched toward the nightstand, scanning the floor to see if the picture had fallen off when Mom hit her alarm clock that morning. But the picture was gone.

Downstairs in the kitchen, Teddy and Katy were peeling oranges for breakfast. Teddy kept jabbing his thumb into the flesh of the orange, making juice drip down his arm and onto the floor. Jackson, our terrier, licked the tiles.

Katy pushed Teddy toward the paper-towel rack. “Mom,” she said. “Mom, he’s getting it everywhere.”

Teddy shoved her back. “She’s pushing me.”

Standing at the sink, Mom held its sides as if she was at a podium. Her mouth was caught between a smile and nothing. She looked over the backyard, where the Kmart swing set was rusting and a few scraggly trees almost blocked our neighbor’s property. Usually she looked tired, even if the morning had barely begun. But for a moment, her face was clear and her eyes were focused.

Jackson barked. Teddy reached out to push Katy again, but her longer arms stopped him.

Mom blinked and wiped her hands on her jeans. “Both of you,” she said, tossing a sponge at Teddy. “No horsing around.” Teddy neighed, and Mom laughed a little.

I tried not to eye Mom as I made toast. Jackson nudged my leg, so I tore him a corner of bread. “Where’d your wedding picture go?” I asked.

“Okay, that’s enough,” Mom told Teddy, who had cleaned up the orange drips and was now scrubbing the rest of the counter. She pried the sponge from his hand and attacked the dishes from last night’s lasagna. A tiny
V
appeared in the middle of her forehead. Over the sink, her hands worked furiously. I wondered if she would crack a plate. “Alex, did you say something?”

“The picture on your nightstand. When you and Dad got married.”

Katy giggled into her cereal. “The puffy dress.”

“Isn’t it there? Dammit.” Mom snatched her hand away from the hot water and turned the cold-faucet handle. “George must have moved it.”

Katy looked up from her breakfast and caught my eye briefly, while Teddy continued to suck on orange slices. “Who’s George?” Katy asked.

“David. Dad,” Mom corrected herself, but she spoke carefully, as if she was afraid of making the same mistake again. She turned to me. “And exactly why were you in my room, Alexandra?”

“I was looking for my striped shirt,” I said, not blinking. “I thought it got mixed up in your laundry.” Katy was suddenly fascinated by her breakfast. She knew my shirt was on our bedroom floor, after I had tried it on and flung it off in disgust, but she also knew better than to say so. Now that Katy was in middle school, we had an understanding: she kept my secrets so I would do the same when she got some worth keeping.

Mom stared at me for a moment before shutting off the water. I’d expected more of a fight. Sneaking cash from her purse wasn’t a regular thing for me, but I knew she had noticed some missing before and suspected me. Katy hoarded her money, so I couldn’t ask her, and Teddy couldn’t keep his mouth shut.

“Driver’s ed today?” When I told her yes, she asked, “Have you practiced at all? Dad hasn’t taken you in a week.”

Whenever my dad asked if I wanted to go for a drive, I said I was busy or tired or made some sarcastic comment that would keep him from wanting to spend time with me in an enclosed space. But the real problem was that controlling a huge, whirring hunk of metal terrified me. My heart raced and I couldn’t breathe and I forgot everything I was supposed to do. Cars hadn’t always scared me. It wasn’t like I cringed whenever anyone drove above the speed limit. I’d never been in an accident — not a real one, anyway. But something happened when I was forced to get behind the wheel. There were too many parts, all hidden under the hood; any piece could come off or spark. The brakes, the gas, the wheel, the mirrors — how could I be expected to pay attention to so many things at once? It went too fast. Anything could happen. So I avoided being behind the wheel as much as possible.

“Who cares if I don’t practice? I’m going to be, like, the worst one anyway.”

“That’s
because
you don’t practice,” Mom said. “It takes time. And it would be a big help for me if you could drive your sister to gymnastics —”

“Oh, yes, please let me cart around my little sister. That’s exactly how I want to spend my afternoons.” At the table, Katy insisted that she didn’t want to ride with me, either.

It wasn’t the first time Mom had tried to convince me to drive. She and Dad had even offered to pay for a cell phone if I got my license — in case I broke down while I was on the road. By now I was the only person I knew who didn’t have a cell, so that had almost gotten me, but then I’d remembered the feeling of being behind the wheel and claimed I didn’t want one.

I devoured my toast at the counter and brushed crumbs into the sink. “See you later,” I said, grabbing my backpack.

“Hey, where are you going?” Mom said.

“You’ve got ten minutes before the bus. And you haven’t made your lunch yet.”

Mom’s eyebrows knit together. “You’ll never make it in time if you walk.”

“Only if you cut through the woods,” Katy muttered, probably deciding that if she had to ride the bus, then so did I.

“Oh, no,” my mother said as she arranged slices of bread for sandwiches. “You want to walk, that’s fine, but you have to stay on the street, where people can see you.”

I gave her a look like I didn’t know how she functioned in the world. “What’s going to happen? I’ll get attacked by a squirrel?”

Teddy snorted a laugh. “Maybe Alex’ll get rabies and she’ll get all crazy and foamy.” Sticking out his lower lip, he made slurping noises.

Mom ignored Teddy, even as Katy threw her napkin at him and told him to stop. “Remember that man a few years ago?” Mom said. “The one who tried to grab that boy?”

“Yeah, I’m desperate to get raped and murdered,” I said, slinging my backpack over my shoulder. “Can I go now? I’m going to be late.”

Mom cut three sandwiches so aggressively that I thought she’d cut off her own finger. “I am so sick of this attitude of yours. Ever since you became friends with that Theresa Harbin, you do things like threaten people in chemistry class.”

I laughed. “That was one time! And we didn’t threaten people; we threatened stupid John Lacey’s letterman jacket. He deserved it.”

Mom shoved sandwiches into paper bags. “You think you’re entitled to everything.”

“Oh, my Lord, you are so melodramatic,” I said. “Just because I want to walk somewhere, you make a huge deal out of it. Shouldn’t I be getting fresh air?”

“Yeah, right, I’m such a horrible brat. Tell me about all the things I can’t do right, please.”

“You
could
do anything if you tried at all. But you don’t care about anyone but yourself.”

“No, you just can’t understand how anyone could not want to do everything your way!”

We were almost shouting now. At the table, Teddy and Katy exchanged looks.

“And I don’t appreciate you going through my things when I’m not around,” Mom said. “How would you like it if I did that to you?”

The way Mom looked at me, her head tilted and lips pressed together, she must have been trying to remember a time when I didn’t act like I hated her. When she thought I was trustworthy. For that, she’d have to go back a while. I was about to tell her that we’d had this argument a million times, but suddenly her eyes were clouded with something else. The planes of her face relaxed, and she gazed beyond me, to the kitchen table and beyond even that, into nothingness.

“Never mind,” I said, and strode out the front door before she could ask me to walk my brother home from school.

I was still annoyed as I made my way across the lawn and down the street, toward the woods. Storms had prematurely yanked all the leaves off trees, and now the ground was slick with color. Car horns blared — senior boys greeting one another. I wished they’d knock heads together. Maybe that way someone’s skull would crack open and we would get to see if any of them actually had a brain. For a moment, I considered skipping school altogether to hide out in the woods. I hadn’t done my math homework — big shock — and probably wouldn’t have time to finish during homeroom. Stoners and couples escaped to the graffitied boulder out here during free periods, but it seemed like their activities involved at least two people. On my own, I’d probably just end up hungry and feral.