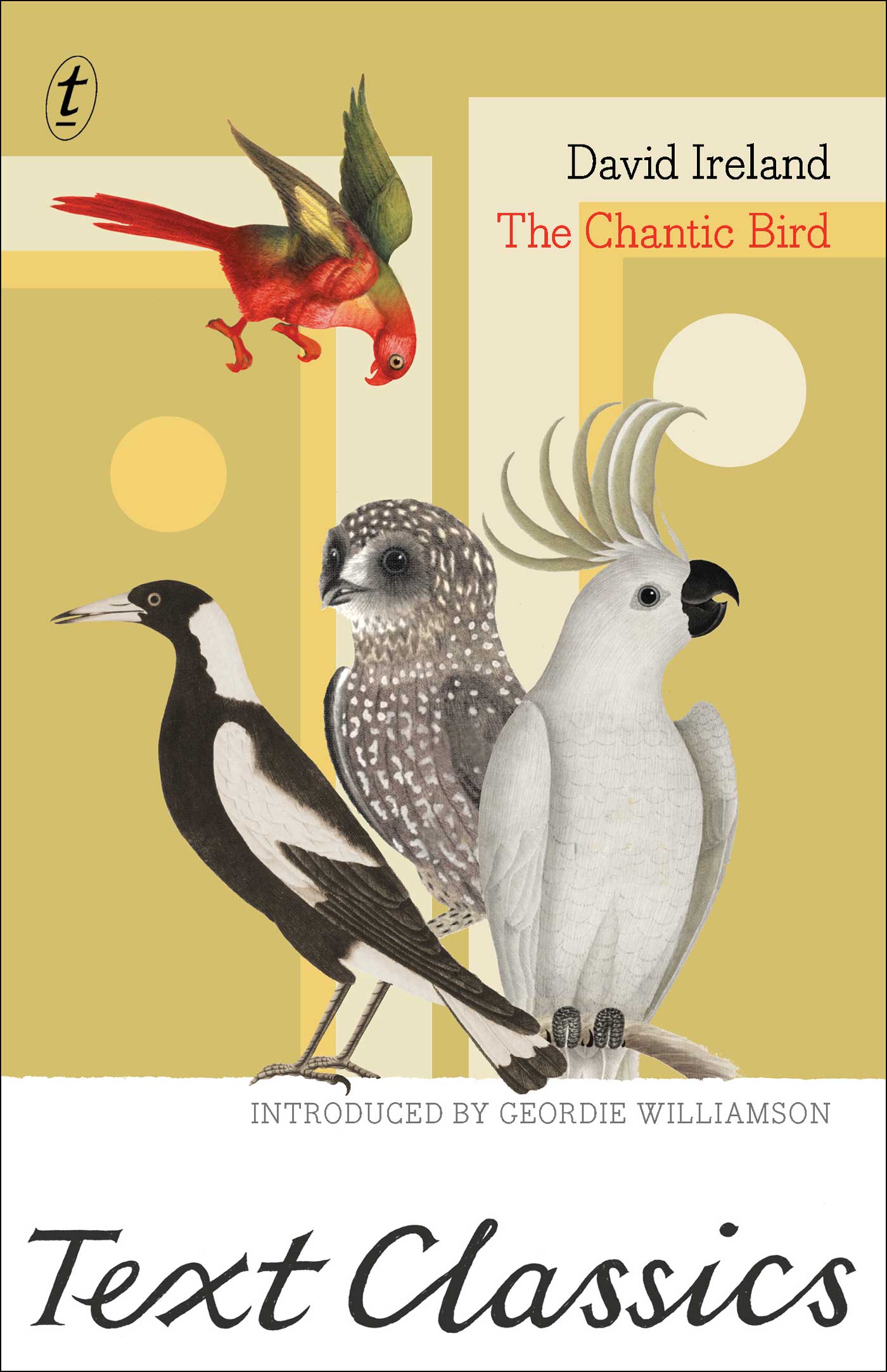 DAVID IRELAND was born in 1927 on a kitchen table in Lakemba in south-western Sydney. He lived in many places and worked at many jobs, including greenskeeper, factory hand, and for an extended period in an oil refinery, before he became a full-time writer.

Ireland started out writing poetry and drama but then turned to fiction. His first novel,
The Chantic Bird
, was published in 1968. In the next decade he published five further novels, three of which won the Miles Franklin Award:
The Unknown Industrial Prisoner
,
The Glass Canoe
and
A Woman of the Future
.

David Ireland was made a member of the Order of Australia in 1981. In 1985 he received the Australian Literature Society Gold Medal for his novel
Archimedes and the Seagle
. He lives in New South Wales.

GEORDIE WILLIAMSON is the author of
The Burning Library
. He is the
Australian
’s chief literary critic, a position he has held since 2008, and in 2011 he won the Pascall Prize for criticism. Geordie lives with his family in the Blue Mountains.

A Woman of the Future

Archimedes and the Seagle 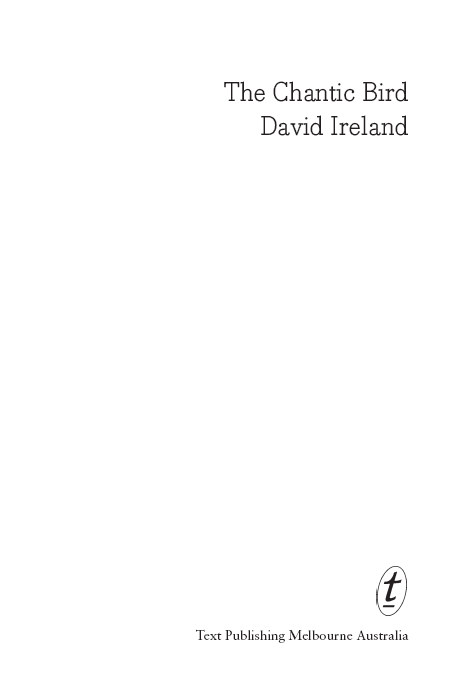 IT WAS while working at Shell’s Clyde oil refinery in Sydney during the early sixties that David Ireland, a working-class boy who left school at fifteen, began his first novel,
The Chantic Bird
. Written on note cards between Ireland’s shifts operating a catalytic cracker, it remains one of the most astonishing debuts in Australian literature. Not just because of the unlikely background of its creator—the Fiercely Gifted Autodidact is a cliché—but because it is
sui generis
. No document of its time gives so distinct a sense of literary modernism adapted to local conditions.

While the everyday experience of the refinery found its way into Ireland’s second novel,
The Unknown Industrial Prisoner
,
The Chantic Bird
contains the psychic residue of his time there. It’s a book which suggests that wage-slavery is not a figure of speech. And it is the opening boast of Ireland’s unnamed narrator, echoing the immortal first line of Joseph Furphy’s
Such Is Life
(‘Unemployed at last!’), that he has just been sacked from his seventeenth job ‘for fighting or gambling—I don’t know which—and because I was hardly ever there’:

I was gambling all right, but someone called me a cheat and swung at me, I moved my head and swung back and this kid went in to one of the bosses with blood coming out of his mouth saying I was a standover man. At least the man that lectured me before they gave me my pay said I was a standover man, but he’d been a policeman before he got this good job as personnel officer, so he might have been a bit homesick for the force and a good old backhander in the friendly atmosphere of the charge room. I don’t know.

Familiar ghosts hover behind these sentences: Camus’ Meursault, whose moral heartbeat flatlines under a Mediterranean sun; Holden Caulfield, that mid-century archetype of wounded youth; Dostoevsky’s Underground Man and his antipathy to all systems and hierarchies; and the radical freedom espoused by the American Beats. But the raw materials—gambling, fighting, sticking it to the boss—are unmistakably Australian.

This authorial voice remains thrilling and disquieting in equal measure. No one before David Ireland sounded quite like him: his writing is experimental and brutal, utterly at odds with the agrarian school of Australian fiction. And he had no immediate contemporaries, aside, perhaps, from Kenneth Cook, author of
Wake in Fright
, who was born only months after Ireland in the same south-western Sydney suburb of Lakemba.
Wake in Fright
appeared in 1961, seven years before
The Chantic Bird
was eventually published.

Today, Ireland’s traces are everywhere: in the early metafictions of Peter Carey and in
The Lif
e, the most recent novel by Malcolm Knox; in the grungier corners of Andrew McGahan and Christos Tsiolkas; in film (
Mad Max
,
Ghosts...of the Civil Dead
,
Bad Boy Bubby
) and in the antipodean gothic of the man who may now be our most influential literary export, Nick Cave. Hemingway once suggested that all of American literature came out of
Huckleberry Finn
. It’s arguable that one tradition—modernist, masculine, urban, working-class—emerged from
The Chantic Bird
and the writings that followed it, irrespective of Ireland’s invisibility to the culture at large.

The narrator of Ireland’s
The Chantic Bird
lives up to the self-projections of the novel’s opening passage—in fact, he moves far beyond them. We first find him living in the dark recesses of Taronga Zoo, a site suggestive of the bestial heart of the ordered city. Aside from the intermittent visits the narrator makes to a suburban family, to whom his relationships are ambiguous—the three children who live there, Stevo, Chris and Allie, may be his siblings or his children; Bee, the woman who cares for them, may be a kindly domestic helper or the narrator’s wife—he dwells, a feral citizen, in cracks and crevices of the urban fabric, in bushland caves or the crawl-spaces of suburban ceilings.

From these he emerges each day to enter the city and join its crowds: adopting, according to his mood and needs, the guise of merry prankster, violent criminal or domestic terrorist. His ultimate purpose is opaque. At times, the exploits he describes in a febrile mix of past and present tense are expressions of anarchy, pure and simple; at others, the narrator hints at analogies between his behaviour and the rapacity of capitalist endeavour. His antisocial actions merely parallel the violence sublimated in ordinary society. Just as Bret Easton Ellis’s monstrous Patrick Bateman presents himself as an exemplary product of American late capitalism, our narrator could pass as a post-war, blue-collar Australian psycho.

Stealing televisions, torturing animals, rolling drunks, destroying property, derailing a train, committing rape and murder—youthful joie de vivre meets the empathetic dead zone of a psychopath. The moral queasiness his story engenders is turned against the reader. We are enjoined to respect the narrator’s decision to drop out; we sympathise with his anger at the deadening conformity of modern life. What repels is the licence he grants himself over others in the light of those observations. The judgment he casts over his fellows is icy:

[S]itting up in millions of houses filling in insurance policies on their fowls, their wrought-iron railings, concrete paths, light globes, their health, funeral expenses, borers, carpets, insuring against loss of work, loss of clothes, loss of conjugal rights, loss of money, loss of friends. I wonder if they had policies that could protect them from me.

The narrator employs the affectless speech of a Sydney teenager of the 1960s. Any evidence he offers is so freewheeling and colloquial that the reader is lulled into a false sense of trust. It soon becomes clear that he’s unreliable on multiple levels.

We learn in the opening pages that a wannabe novelist named Petersen has approached the youth with the aim of writing his biography; these are the pages we are now reading. In this first account, there is an element of homoerotic attraction on the older man’s part; later, in a different version, it seems that Petersen is mounting a therapeutic intervention into the troubled teen’s life. Whatever the case, we belatedly appreciate that the story has been filtered through a second consciousness, and its emphases may be a matter of invention rather than self-exposure.

Yet the narrator assures us that he combed the text for falsehoods and exaggerations, so that it reflects true events and not Petersen’s interpolated fictions. A second layer of storytelling, in other words, claims to have trumped the first.

These competing accounts destabilise the reality that the narrator has, with such relish, brought to life. Realism is ambushed in a manner as violent as the physical crimes the narrative describes. Ireland lures the reader on with a tone of easy camaraderie and by relating a vivid sequence of events. Then he turns voice and world inside out. He cuts characters to ribbons for random reassembly and designs the novel’s structure to counter smooth narrative flow. It’s a process that Ireland refined and expanded in his subsequent fictions.

Those novels made the author one of Australia’s most awarded and controversial of the seventies and eighties. He won three Miles Franklins (for
The Unknown Industrial Prisoner
,
The Glass Canoe
and
A Woman of the Future
). A government minister intervened to revoke funding for a film based on
The Unknown Industrial Prisoner
. Another book was removed from the New South Wales school syllabus after complaints about its suitability, while a dissenting judge from the Miles Franklin panel griped that
A Woman of the Future
was ‘literary sewage’.