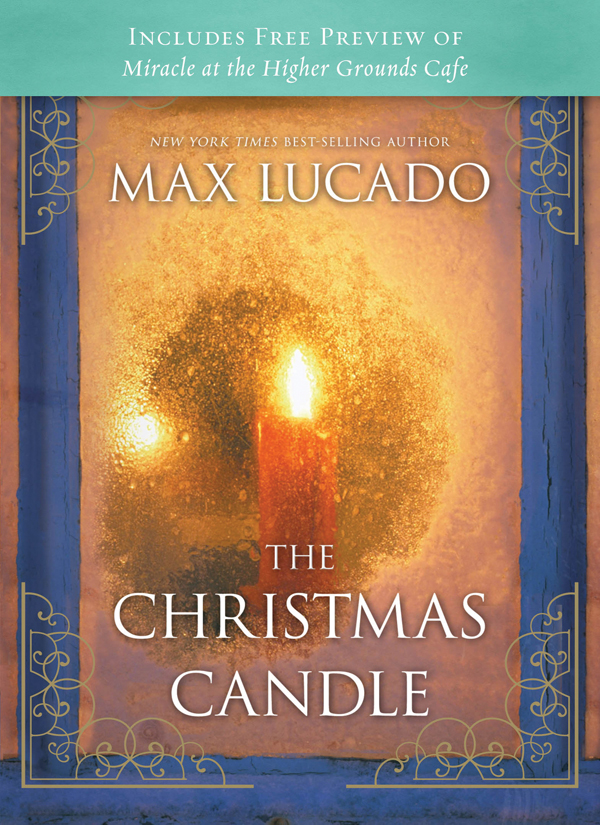 “Fans of Charles Dickens and Jan Karon's Mitford series, you're in for a treat! Max Lucado has penned a wholly original Christmas story complete with cobblestone streets, quirky characters, and a supernatural visit that you'll never forget. I never miss the opportunity to read a new Max Lucado book and neither should you.”

“The Christmas Candle
is a beautiful story of hope and miracles. Max paints the characters with such richness that they truly become alive in your mind. Expect to be moved and inspired as you read this wonderful depiction of the power of believing.

“A powerful reminder of the true meaning of faith and community,
The Christmas Candle
is a welcome respite from the harried commercialism of the holiday season.”

“
The Christmas Candle
shines with a radiant insight. Written with Max Lucado's signature style of sincerity and spiritual perception, this story will warm the reader's heart with the wonders of God's love and mercy.”

Thomas Nelson titles may be purchased in bulk for educational, business, fund-raising, or sales promotional use. For information, please e-mail [email protected]

Publisher's Note: This novel is a work of fiction. Names, characters, places, and incidents are either products of the author's imagination or used fictitiously. All characters are fictional, and any similarity to people living or dead is purely coincidental.

For Greg and Susan Ligon:
Celebrating the lumination
you bring to so many

AN EXCERPT FROM MIRACLE AT THE HIGHER GROUNDS CAFE

Light exploded in the small house, making midnight seem as daylight. The bearded candle maker and his wife popped up in bed.

“Wh-wh-what is it?” she said, trembling.

“They're sleeping. Stay where you are!”

The wife pulled the blanket up to her chin and took a quick look around the shad-owless room: children asleep on the floor, the table and chairs resting near the hearth, tools piled in the corner.

The candle maker never shifted his wide-eyed gaze. The figure wore a singular flame: a heatless tongue stretching from ceiling to floor. His form moved within the blaze: a torso, head, and two arms. He reached out of the radiance and extended a finger toward a rack of hanging candles. When he did, the couple squeezed together and slid farther back in the bed.

The husband mustered a question: “Are you going to hurt us?”

The visitor gave no reply. He waited, as if to ensure the couple was watching, touched one of the candles, and then vanished.

The room darkened, and the just-touched candle glowed. The man instinctively reached for it, stepping quickly out of bed and across the room, grabbing the candle just as the light diminished.

He looked at his wife. She gulped.

“What just happened?” she asked.

He moved to the table and sat. She hurried to do the same.

“An angel?” she wondered aloud.

He placed the candle on the table, and both stared at it. Neither knew what to say or to think.

The next morning found them still sitting. Still staring.

Their children awoke, so they ate breakfast, dressed warmly, and walked the half mile up Bristol Lane to St. Mark's Church for the celebration of the final Sunday of Advent.

The candle maker gave the rector extra candles for the Advent service but kept the angel-touched candle in his coat pocket. He started to mention the visitation to the reverend but stopped short.
He won't believe me.

The couple tried to concentrate on the sermon but couldn't. Their minds kept reliving the light, the angel, and the glowing candle.

They shared a pew with a young mother and her two children, all three disheveled and dirty. The couple knew her, knew how her husband, a servant to a baron, had died a month before in a hunt.

After the service the widow described her plight to them. “We have little food left. Enough for a few days.”

The chandler's wife reached into her husband's coat pocket for a coin. When she did, she felt the candle. She handed both to the young mother, inviting, “Light this and pray.” As the young mother turned to leave, the wife looked at her husband and shrugged as if to say, “What harm?”

They spoke some about the candle over the next few days but not much. Both were willing to dismiss it as a dream, perhaps a vision.

The Christmas Eve service changed that. It began with a time of blessing-sharing. Anyone in the congregation who wanted to give public thanks to God could do so. When the rector asked for volunteers, the young mother stood up. The same woman who, days earlier, had appeared unkempt and hungry. This night she beamed. She told the congregation how a wealthy uncle in a nearby county had given her a farm as a gift. The farm was a godsend. She could live in the house and lease the land and support her family. She looked straight at the candle maker and his wife as she said, “I prayed. I lit the candle and prayed.”

The couple looked at each other. They suspected a connection between the candle and the answered prayer, but who knew for sure?

“I just think it odd that Oxford would assign its top student to a village like Gladstone,” Edward Haddington said to his wife, Bea. A broad-shouldered man with a brilliant set of dark eyes and full, gray eyebrows, he wrestled to button the waistcoat over his rotund belly.

Equally plump Bea was having troubles of her own. “How long since I wore this dress?” she wondered aloud. “Must I let it out again?” Then louder, “Edward, hurry.

He's due within the hour.”

“I don't know what to think, dear. But I know we need to leave now if we don't want to be late. He arrives at half-past one.”

The couple hurried out of the small gabled house and scurried the half mile south on Bristol Lane toward the center of the village. They weren't alone. A dozen or more villagers walked ahead of them. By the time Edward and Bea reached the town commons, at least half the citizens of Gladstone, some sixty people, stood staring northward. No one noticed the white-haired couple. All eyes were on the inbound wagon.

The driver pulled the horses to a halt, and a young man stood to exit. He bore beady eyes, a pointed chin, and his angular nose seemed to descend forever before finding a place to stop. With a tall hat in his hand and a black coat draped on his shoulders, Rev. David Richmond surveyed the crowd. Edward detected a sigh. “We must appear odd to him,” he whispered to Bea.

She cupped an ear toward him. “What?”

He shook his head, not wanting to risk being overheard.

A goggle-eyed locksmith, so humped from filing he had to greet the guest with a sideways, upward glance, extended the first hello. Next came a short farmer and his Herculean, simpleminded son. “He can clean the windows in the church,” the father offered. “He did for Reverend Pillington.” A mill worker asked Reverend Richmond if he liked to fish. Before he could reply, a laborer invited the minister to join him and his friends at the pub.

“Let the man breathe, dear people. Let him breathe.” The citizens parted to let Edward extend his hand. “A fine welcome to Gladstone, Reverend. Did you enjoy the carriage ride?”

England at her best. Yet the minister replied with an unconvincing, “It was pleasant.”

Edward picked up the clergyman's bag and led him through the crowd. “We'll deposit your things at the parsonage and let you freshen up. Then I'll leave you with the Barstow family for tea.”

As the crowd dispersed, the reverend nodded and followed his hosts toward the manse. It sat in the shadow of St. Mark's Church, which was only a stone's throw from the center of town. The hoary, dog-toothed Norman tower stood guard over the village. Edward paused in front of the church gate and invited, “Would you like to take a look inside?”

The guest nodded, and the three entered the grounds.

A cemetery separated the church from the road. “To preach to the living, you have to pass through the dead,” Edward quipped.

The walls of the path through the cemetery were, at points, shoulder high, elevating the headstones to eye level. The newest one lay beneath the tallest yew tree near the church entrance and marked the burial place of St. Mark's former rector. Edward and Bea paused, giving Richmond time to read the inscription:

Ours, but for a moment.

“This month we'd have celebrated his fiftieth year at the church,” said Bea.

“When did he die?” the reverend asked.

Edward nodded. “We dearly loved the man. You'll find his fingerprints throughout the valley. He taught us to trust, to pray. He even taught me to read and write.”

Bea chimed in. “Edward here was a diligent student. Come ahead. Let's step inside.”

The heavy doors opened to the rear of the sanctuary. Three shafts of stained-glass sunlight spilled through tall windows. “My grandfather helped install those,” Edward offered. He strode the five short steps to the baptismal font and motioned for the reverend to join him. “Dates back two centuries,” Edward said, running a finger along the limestone. “My ancestors were all baptized here. In fact, my great-greatâBea, how many âgreats' is it?”

She placed a finger to her lips. “Let the reverend meditate.”

Edward apologized with a wave and stepped back.

One aisle separated two groups of ten pews. A lectern faced the seats on the left, and a pulpit presided over the church from the right. Brass organ pipes climbed the chancel wall behind the pulpit, where two sets of choir benches faced each other.

Songs of Love and War by Santa Montefiore
His Expectant Lover by Elizabeth Lennox
Fire Damage (A Jessie Flynn Investigation, Book 1) by Kate Medina
When The Jaguar Sleeps: A jungle adventure by Kalis, J.A.
The Fox's Quest by Anna Frost
Wrapped in Flame by Caitlyn Willows
Beauty by Daily, Lisa
Fall for a SEAL by Zoe York
The Smart One by Jennifer Close
Samantha Sanderson Without a Trace by Robin Caroll