Read The Circle of Eight Online 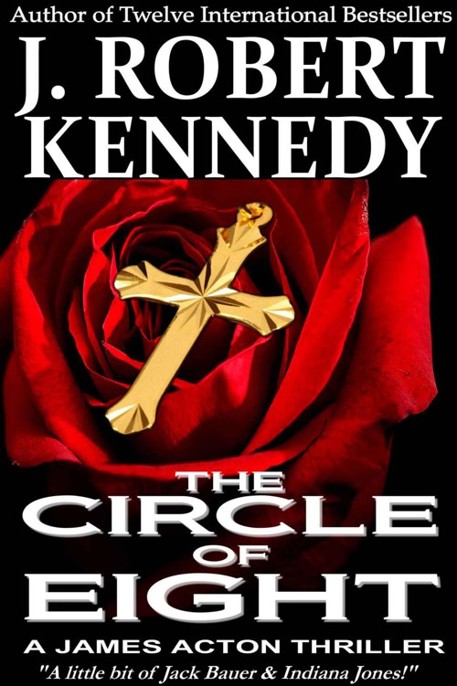 ABANDONED BY THEIR GOVERNMENT, DELTA TEAM BRAVO FIGHTS TO NOT ONLY SAVE THEMSELVES AND THEIR FAMILIES, BUT HUMANITY AS WELL.

The Bravo Team is targeted by a madman after one of their own intervenes in a rape.
Little do they know this internationally well-respected banker is also a senior member of an organization long
thought extinct, whose stated goals for a reshaped world are not only terrifying, but with today’s globalization, totally achievable.

As the Bravo Team fights for its very survival, they are suspended, left adrift without their support network.
To save themselves and their families, markers are called in, former members volunteer their time, favors are
asked for past services, and the expertise of two professors, James Acton and his fiancée Laura Palmer, is requested.

It is a race around the globe to save what remains of the Bravo Team, abandoned by their government, alone in
their mission, with only their friends to rely upon, as an organization over six centuries old works in the background to destroy them and all who help them, as it moves forward with plans that could see the world population decimated in an attempt to recreate Eden.

The Circle of Eight
is the seventh installment in the internationally best selling
James Acton Thrillers
series.
In
The Circle of Eight
J. Robert Kennedy, author of over a dozen international best sellers, is at his best,
weaving a tale spanning centuries and delivering a taut thriller that will keep you on the edge of your seat from page one until the breathtaking conclusion.

The Protocol has been on the best seller list in the US and UK since its release,
including occupying the number one spot for three months.

"If you want fast and furious, if you can cope with a high body count,
most of all if you like to be hugely entertained, then you can't do much better than J Robert Kennedy."

All rights reserved. The use of any part of this publication
reproduced, transmitted in any form or by any means, electronic, mechanical,
photocopying, recording, or otherwise, without the prior written consent of
the publisher, J. Robert Kennedy, is an infringement of copyright law.

This is a work of fiction. Names, characters, places and incidents
are either the product of the author's imagination or are used fictitiously,
and any resemblance to any person or persons, living or dead, events or locales
is entirely coincidental.

For the bravest girl I know, my daughter.

You have no idea how proud I am.

Also by the Author

In
June 1979 an unknown person or group using the alias R.C. Christian, hired a
granite company to build a monument to exacting specifications in Elbert
County, Georgia.

It has
become known as the Georgia Guidestones, and nicknamed the “American
Stonehenge”.

The
structure is inscribed in eight modern and four ancient languages including
Babylonian, Classical Greek, Sanskrit and Egyptian hieroglyphs.

To this
date nobody knows who built the monument, or why. However what is clear, is
whoever they were had a message to deliver to us, for carved on these Guidestones
are ten guidelines, or commandments, they wish us to follow:

Though
it is disturbing to not know who would have the gall and power to build a
monument then abandon it for the State to maintain, what is more disturbing
is how they intend to deliver on their guidelines. For if they were to succeed
in
implementing them, over 90% of the human population would need to be wiped
out.

“Professor Acton, I will count to ten, and if you do not tell me
what I want to know, she dies.”

The hood
over his head was suddenly torn away, the light glaring at him blinding.
Professor James Acton tried to raise his hands to block it but they were bound
behind him by what felt like zip ties rather than handcuffs, the hard plastic
biting into his wrists.

“Wait!”
he yelled, leaning forward in the unforgiving chair he was bound to, peering into the darkness behind the light, trying to find the
source of the voice. “I don’t even know what you’re talking about! What do you
want to know?”

His
heart was already slamming into his chest from their ordeal. Police had burst
into their room, arrested them, thrown them in the back of a police vehicle, and
then drugged them. He had been awakened only moments before with a slap to his
hooded face.

“Where
is what?” he cried as his eyes finally adjusted. He still couldn’t see who was
asking the questions, they were hidden in the darkness, behind the light, but
he could see Laura, sitting in a chair of her own, facing him, tears running
down her cheeks, her mouth gagged so she could say nothing, all he could hear
were her sobs. He turned to the darkness. “If you hurt her!” But he didn’t
finish his sentence.

“Three,”
echoed the voice. “We will not
hurt
her, Professor Acton. We will
kill
her. I promise she won’t feel a thing.”

“I don’t
know what you’re looking for!” he yelled, then sucked in a breath, trying to
calm himself down, fearful he might anger them and speed up the count. His
stomach was in turmoil, like butterflies had filled it and were now desperate
to get out. He was pumped full of so much adrenaline his hands were shaking and
he was sweating profusely, his chest soaked, his forehead dripping. “Please,
tell me more. I’ll tell you anything you want, just don’t hurt her. I just need
to know more about what you’re looking for.”

Professor
Laura Palmer, his fiancée, the love of his life, the first woman he had ever
truly loved, who excited him in every way a woman should despite their
relationship approaching three years, fixed hers on him. He looked into her
eyes, trying to convey that love to her, and he could tell she knew how he
felt, and how sorry he was.

“Four.”
His ears roared with the sound of his blood pumping. “We want the Catalyst,
Professor.”

“The
Catalyst? I’ve never heard of it. What is it?”

“Five.”
He felt himself becoming lightheaded. He widened his stance for balance, the
zip ties holding his ankles to the chair legs giving him little play. Taking in
several deep, slow breaths, he tried to steady his racing heart. “It is
something that we once possessed, and was lost to us centuries ago.”

His
heart was still slamming in his chest, but he was beginning to regain control.
He had to be careful. It seemed apparent that every time he spoke, and they
responded, their captor would increase the count. He had at most five more
questions before his beloved would be dead.

“What
makes you think I have it?”

“Six.”
Acton strained as hard as he could against his bonds, but nothing. “You were
seen holding it in a photograph.”

Acton’s
mind began flicking through every photograph he could ever remember having been
taken of him, but there were thousands if not more, and he quickly found
himself only seeing photographs of Laura, smiling, laughing, kissing him in
self-shots.

“If you
show me the photograph, then I’ll know what you’re talking about.”

He heard
footsteps echo through the room, the sounds giving him the impression it was
large, mostly empty, little to absorb the sounds bouncing off its walls.
Suddenly a robed figure entered the light, the long flowing dark brown cloth
silhouetted against the light, the face nothing more than a black emptiness.

The
voice still came from the background, not from the man in front of him. A
photograph was shoved in front of his face, and it took a moment for his eyes
to refocus. It was him with several of his students, each holding a different
object. He remembered it instantly. “That’s from the south of France, just
outside St. Tropez,” he blurted, elated he was finally able to answer a
question and perhaps save Laura. “I was asked to inventory a private
collection; some billionaire had died. There were hundreds of pieces. Over a
thousand, actually. Are you saying that one of these items is your Catalyst?”

“Please!
Which one? Which artifact?”

A finger
pointed to a cube being held by one of his students.

“That?
That’s the Catalyst? We didn’t know what it was so we just catalogued it.”

“Nine.”
The man in the robe retreated into the darkness. “Where is it?”

“But
that was over ten years ago! I don’t know where it is,” he cried, tears welling
in his eyes as he knew he had no way to give them what they wanted. All he
could think to do was to keep talking, not give the man a chance to end his
count. “All we did was catalog the collection, then it was sold at auction, I
think. We didn’t keep any of the pieces. I’m sure if you check the auction
they’ll tell you who bought it!”

“So then
you
can’t tell us where it is.”

“No, but
I can find out. I’ll do whatever it takes. Please! I’m begging you! Please
don’t hurt her! Kill me instead. Shoot me! She has nothing to do with this! I
didn’t even know her back then.”

“Oh God,
Laura! I’m so sorry! I love you! I love you!” He struggled against his bonds,
shifting in the chair, pulling with all his might, blood flowing down his
wrists as the plastic sliced through the skin. He pushed forward hard, trying
to get as close to her as he could, but it was all to no avail. She was sobbing
freely now, her face red, her eyes pleading, crying through the gag, he could
tell she was shouting that she loved him too.

Footsteps
echoed, then the dark robed figure stepped between him and Laura, a gun held in
the man’s right hand.

The man
raised his right foot and pushed Laura’s chair over. It collapsed backward and
Acton lost sight of her as she fell behind the light that had illuminated her.
The man stepped into the darkness and Acton heard the most precious thing in
his life scream.

Then the
crack of a gunshot broke his heart for the last time.

First Sergeant Phil “Stucco” Reeves shivered, grabbing his arms in a
hug, rubbing his hands up and down as he stood up.

“Cold?”
asked Command Sergeant Major Burt “Big Dog” Dawson as he sipped a coffee that
was still piping hot. “Coffee’s fresh and a hell of a lot better than back at The
Unit.” Dawson was in command of Delta Team Bravo, a unit of the elite Delta Force,
arguably the best counter-terrorism unit in the world, but not necessarily
baristas when it came to making coffee. At Le Grand Hotel in Geneva however,
they had access to some of the best.

Behind Your Back by Chelsea M. Cameron
Seduced by Darkness by Alex Lux
Signs in the Blood by Vicki Lane
The Manning Grooms by Debbie Macomber
Charity by Deneane Clark
More: A Novel by Hakan Günday
Slayer's Reign in Blood (33 1/3) by Ferris, D.X.
The Drifter's Bride by Tatiana March
Stained Snow by Brown, Fallon
Temptation Rising by Arthur, A.C.