Read The City of the Sun Online

The City of the Sun 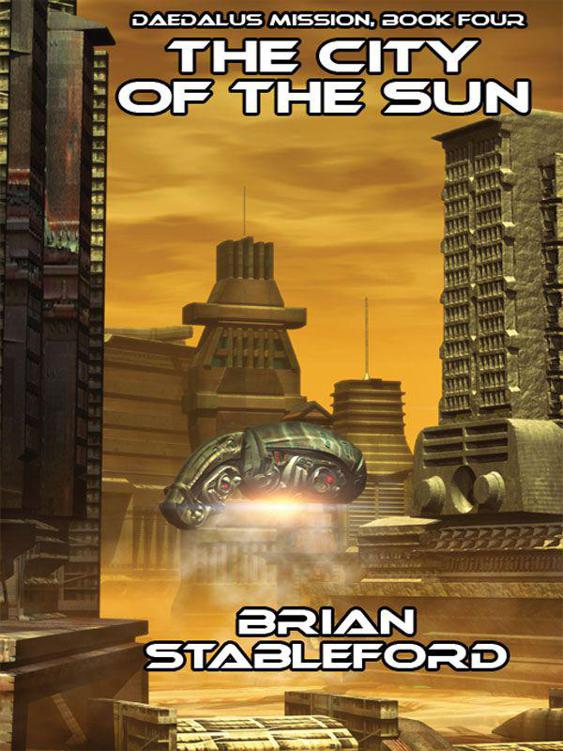 THE CITY
OF THE SUN

Nathan was drumming his fingers on the tabletop, just to keep himself active. He was irritating the rest of us, but if he’d stopped someone else would have started. It was one of those times when a state of mild irritation is preferable to deadly silence. I had a sheaf of papers in front of me, and was pretending to study them earnestly, but I wasn’t fooling anyone. At least I was putting up a better show than Linda Beck, who was staring studiously at a purely hypothetical object somewhere above Conrad’s head. Conrad had his eyes half-closed, in a fashion that suggested both tiredness and diffidence.

Mariel, meanwhile, was watching us all, absorbing our anxiety, our impatience and the tautness of our thoughts, but without relieving us of any of the burden. For once, her talent didn’t give her any meaningful advantage. We could all read one another’s minds, and know what was going on therein. We were, for once, in harmony.

Karen appeared in the doorway.

“We’re over dayside again,” she said. “The IR scan picked up nothing significant on the nightside. Just a few hot rocks.”

“How low are we?” asked Nathan.

“Low enough and still decaying,” she replied. “Anything where more than a hundred people might live ought to show up on the photoscan this time around. We can’t take in the whole surface but we’ll loop all the northern temperate sites that are daylit on this sweep. We did all the southern ones last loop, and if there’d been anything there we’d have spotted it. If they’ve built anything at all we’ll find it now.”

She disappeared back into the bowels of the ship. Nathan’s fingers, which had paused while she spoke, resumed tapping.

“You could cross them,” I suggested. “It might not help but it wouldn’t make so much noise.” As a conversation-opening gambit it left a lot to be desired.

He stopped drumming. His face didn’t change expression and he didn’t answer.

I was tempted to start my own fingers dancing, but felt that it might be undiplomatic.

This was the fourth time around, and we hadn’t yet found a colony that was extinct. But Kilner, who’d taken the
Daedalus
out on her first tour, had. Conrad had been with him. We all knew what if...and the prospect gave us cramps in our stomachs. No reply to our signal. No hotspots on the nightside. If nothing turned up dayside...then the colony was dead. Our mission would change. We wouldn’t be ratcatchers any longer. We’d be ambulance-chasers. Picking up the pieces, trying to gain something meaningful. from an analysis of what went wrong. It wasn’t a job that anyone could look forward to.

We’d have to land at site prime and start searching. We’d search for a year if need be. If they’d missed the site by a long way, we’d find nothing. They could have come down in the tropics or in the ice fields...somewhere that simply didn’t leave them a chance of survival. Unless the scan picked up wreckage, we’d never know. If they were nearer site prime—practically anywhere in the temperate zones—then we’d pick up
something.
We’d be able to spot changes in the vegetation left by any kind of human interference.

Even a crashed ship.

Somewhere inside me a callous voice was adding up the score.
A dead world here is only a second failure,
it was saying.
Along with Dendra. The score’s still level.
The voice was an idiot. We weren’t playing games. And the score would have to be decided on factors a lot more complex than plus or minus. We were dealing with critical thresholds—the most critical one of all being the one that would decide whether the UN thought the gamble of re-mounting the colonization program worthwhile. Within the little voice was another little voice which said:
It’d be best to find nothing at all. If the ships never got here it was their fault. A mechanical failure. Not an argument against the program. The next best thing to a successful colony is nothing at all.

That second voice wasn’t such an idiot. But it was a thorough-going bastard. I didn’t want to listen to it.

Karen’s voice came over the intercom. “They’re going through the computer now. There’s a microfilm reel recording automatically. If the computer spots anything we can look at it right away. If it doesn’t—well, we can check by eye, just in case.”

Just in case.
I let the words echo in my mind.

“Six minutes to site prime,” said Karen. “Forty minutes before we’re back into the black.”

It sounded a long time. It
was
a long time. But we were low, now, and moving slowly enough for the heatshield to cope. Once we were back into the shadow we’d have a long wait
knowing
that nothing would show up on the IR. Then another long pass over daylight, taking in the southern sites. No more chances after that.

I looked hard at Conrad. Underneath his mask there was genuine fatigue—the fatigue of long and constant strain. He was getting old...but he was aging faster than he had any right to. The strain was taxing him. Our job wasn’t the kind of thing that you get used to. It starts again every year. A different world, a new situation, a new set of problems. The
modus operandi
might be the same, and a lot of the drudge work was as mechanical as digging holes in the road—biochemical analysis, nucleic acid synthesis, operon modification...miracles all, but routine miracles, with all the fast work done by computer and only the slow, slow thinking left to human minds. But still, after all that, every job was different. Every world had something unique, something different to throw at us. And no world went out of its way to make it easy for us to cope. It was never easy.

Conrad saw me watching him. He raised a hand slightly in acknowledgment. I looked away.

The minutes dragged. Time in slow motion. The moving finger writes, and having writ...slows down. Pauses. Moves on...but slowly, painfully.

Karen’s voice, distorted by a slight buzz on the intercom, said: “We have a hold. The computer’s holding. I’m snatching the reel to isolate the frame. I’ll get it on the screen in half a minute.”

I had to swing in my chair to fix my eyes on the screen. Nathan leaned forward, and I could feel his breath on my neck.

The photograph came up.

There was a thin ribbon of grey. A peculiar broken effect that meant hills to the top right and bottom left. Patches of white along a seacoast—white sand and chalk cliffs—which took a bite out of the lower right corner of the frame. A river estuary curved in to the center of the field, and just left of center began a contoured polygon of cultivated land. Not a vast acreage, but quite clear.

And in the center of the polygon was a tiny circle.

The picture clicked, and the central area expanded. There was considerable loss of definition—the land around the circle became blurred—but the circle itself remained quite clear, and showed up as a series of circles, each within the other. Concentric circles, like an archery target. I tried to count them, but only the outer three or four were clear. The inner ones were blurred, and the picture was complicated by the fact that there were patches of white in between the circles, irregularly distributed. There were more than five rings, but less than ten.

Like a cross-section through a branch,
I thought.
Growth rings. A city with growth rings.

“A circular city,” said Nathan, softly. “Like the City of the Sun.”

“One of the classical Utopias,” contributed Conrad.

“A city with seven concentric walls,” said Nathan. “An impregnable city, with all the knowledge of the world inscribed on its walls. Perfect knowledge and total commitment. Seventeenth century, I think. Written by Tommaso Campanella while imprisoned by the Spanish Inquisition.”

“Are there seven?” asked Linda, with what seemed to be unwarranted pedantry.

“It makes a sort of sense,” said Nathan, ignoring the mundane question. “After all, they came here in search of Utopia. They came determined to build one. Why shouldn’t they adopt the physical plan of one of the classics? A gesture, I suppose. They can’t, of course, have adopted the social system...somewhat out of date, I feel.”

Karen appeared again in the doorway to take a look at the blow-up. Her question, too, was definitely down-to-earth.

“Alive,” said Nathan, a little more positive than he had any right to be. “That city wasn’t built in a day. The colony’s only been here a hundred years, and that looks like a hundred years’ worth of work to me.”

“What’s its diameter?” I asked.

Karen stepped over to the image on the screen and measured the circle against her thumbnail. Then she paused for rapid calculation.

“Eight miles,” she said. “Give or take a couple, allowing for the blur. Couldn’t get a better image, you see—too much water vapor in the low atmosphere. If the cloud cover was much worse we’d have had to rely on indirect information only the computer could handle. You’re lucky to get this.”

“Thanks,” said Nathan, dryly. “I’m sure we all appreciate your technical expertise.”

“If there
are
seven walls,” I said, “there’s about half a mile in between them. And they’re thick walls, to show up so well under such difficult conditions.” I paused to glance at Karen, who merely raised her eyes to the ceiling. “Anyhow,” I went on, “it’s no metropolis.”

“Eight miles across is a pretty healthy size,” objected Nathan. “And the walls needn’t be solid. You could pack a lot of people into that little area. Without the use of skyscrapers.”

The tension had all evaporated now. We were babbling for the sake of it. All the speculation was futile, considering that we’d be landing to make contact before the day was done. We had a place to land, now. We’d found our needle in the haystack. And even if they didn’t answer our signal, they were probably alive and well.

There were plenty of tragedies that we might find yet, but the worst one of all was averted, and we all felt good.

One of the old Utopias,
I thought.
A gesture.

I liked that. It was evidence of a certain panache on the part of the colonists. After all, Utopia was what the game was all about. A new life in the stars. A better world, to build up from scratch, avoiding all the mistakes that history had made on Earth.

All the avoidable ones, anyhow.

If there
were
any avoidable ones.

They had named this world Arcadia. They had a little list of nice names for nice worlds, and when the survey teams came back they even had a committee to sit down and choose one that might—just might—be a little more appropriate than the next. It was basically a publicity stratagem.
Emigrate to Arcadia
sounds a hell of a lot better than
Emigrate to Fingleton’s World.
Fingleton had been captain of the scout-ship which did the preliminary atmosphere observations. His name was no worse than anyone else’s name (well, not much) but it didn’t quite have the charm of Arcadia. Anyhow, it seemed that the human race was condemned to spend eternity expanding into a universe full of habitable worlds with stupid, banal names. Unless, of course, some brave soul took it upon himself to change his planet’s name to something like Wildeblood.

On reflection, perhaps there was something to be said for Arcadia.