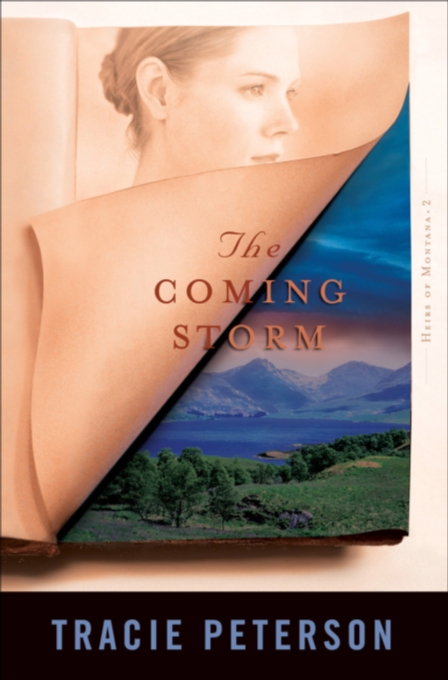 The coming storm / by Tracie Peterson.

To Tom and Dexter,
with thanks for your friendship and
the wonderful house you have built us.
I pray God will richly
bless you both.

A Slender Thread .
•
Where My Heart Belongs

Summer of the Midnight Sun

Under the Northern Lights .
•
Whispers of Winter

A Promise to Believe In .
•
A Love to Last Forever

A Dream to Call My Own .

A Daughter’s Inheritance .
•
An Unexpected Love

Daughter of the Loom .
•
A Fragile Design .
•
These Tangled Threads

A Tapestry of Hope .
•
A Love Woven True .
•
The Pattern of Her Heart.

Shadows of the Canyon .
•
Across the Years .
•
Beneath a Harvest Sky

Land of My Heart
•
The Coming Storm

To Dream Anew .
•
The Hope Within

A Lady of Secret Devotion

Distant Dreams .
•
A Hope Beyond .
•
A Promise for Tomorrow .

A Shelter of Hope .
•
Hidden in a Whisper .
•
A Veiled Reflection

TRACIE PETERSON
is the author of over eighty novels, both historical and contemporary. Her avid research resonates in her stories, as seen in her bestselling H
EIRS OF
M
ONTANA
and A
LASKAN
Q
UEST
series. Tracie and her family make their home in Montana.

D
IANNE
C
HADWICK GAZED OUT ACROSS THE VALLEY FROM
her favorite perch atop a hill on the Diamond V ranch. Gray clouds stretched across the skies from south to west, and biting cold winds whisked down from the mountains, announcing the coming storm. Uncle Bram promised it wouldn’t be all that bad; how he knew, Dianne could never tell, but he seemed right more times than not. Perhaps it was the fact that Bram Vandyke had spent over twenty years in the wilds of this rugged, sometimes hostile, land. Perhaps it was because he listened to the intuitive nature of his wife, Koko, who happened to be half Blackfoot Indian.

No matter the reasoning, Dianne knew both Bram and Koko possessed a strong understanding of the land and the elements in Montana Territory. Dianne wished she could claim the same intimacy with the land, but like a suitor toying with her affections, Montana remained a mystery to Dianne in many ways.

The horse beneath her snorted and gave a toss of his head.

He was a young stallion, one Dianne had been working with for the past few weeks. Fiercely independent and stubborn, the young horse had given her nothing but trouble. Still Dianne persevered. She saw something in this horse—signs of strength and quality—that encouraged her hard work. But beyond that, Dianne felt the animal would one day be a good friend. She couldn’t explain her thoughts, but ever since coming west on the Oregon Trail, Dianne had come to discover an affinity she had with animals, particularly horses.

When she looked at this black—really looked at him—she saw a long-term companion. Her uncle laughed at this idea. A stallion was much too temperamental for a woman, he’d say. Dianne would only smile at this.

“I’m much too temperamental as well,” she murmured. “Aren’t I, Jack?”

The black seemed to understand the question and pawed the dirt in a little dance of affirmation. Dianne laughed. She’d named him Jack after her mother’s favorite Southern general, Stonewall Jackson. The name seemed appropriate for the horse. He emitted not only a powerful, striking nature, but a fearlessness that impressed most everyone who’d dealt with him.

He reminded Dianne of Cole Selby, the man she loved. The man from whom she’d been separated now for much too long. Cole had decided, after much prayer, to remain in Topeka for at least a year. He’d gone to Kansas to see his parents and to try to straighten out their difficult past. Dianne had encouraged him and understood the need for him to make the trip; however, Cole’s decision to stay on and help his father establish a farm had been difficult for Dianne to endure. Part of her was fiercely proud of her husband-to-be. She knew his actions revealed his faith that God could heal the bitterness of the past. Yet she longed for his presence.

“He’ll be home this summer,” she told herself. Just across the valley the heavy slate gray clouds pressed in.

“Come on, Jack. We’d best head back. That snow will be here before we know it.”

Dianne maneuvered Jack back to the trail and sighed. It was only January, and it would be at least June before she saw Cole again. Determined to push aside her loneliness, Dianne tried to focus on the many blessings she had at hand.

Koko, who’d become such a dear friend, was expecting her second child, though the pregnancy had not gone as well as it had when she’d carried little James. The boy, now a rambunctious two-year-old, held a very special place in Dianne’s heart. She fulfilled her longing to be a mother by giving her love to Jamie.

“My day will come,” she reminded herself aloud. “It’s all about God’s timing.”

But God’s timing was sometimes so hard to wait for. At twenty-two, Dianne found her patience weakened by letters from friends back in Missouri. Her girlfriends were married and happily settled in homes of their own. They wrote about the blessings of their new lives—of plans for large families. It cut Dianne deeply, while at the same time she rejoiced for them.

“I just need to keep myself busy,” Dianne murmured. “That’s the secret to enduring loneliness.”

As she neared their cabin, Dianne was surprised to find Uncle Bram rushing out to greet her. “It’s Koko. She’s having the baby.”

“But it’s too early,” Dianne said, kicking her boots out of the stirrups. She slid down Jack’s muscular side as Bram took hold of his reins.

“I know. I think something’s wrong,” he said, the worry contorting his expression.

“Will you see to Jack?” This bear of a man, who would think nothing of staring down a cantankerous bull or dealing with a rattlesnake, appeared terrified by the prospect of what might come.

Dianne knew Bram had been very concerned ever since Koko had taken sick with a cold just after the new year began. The cold had gradually worsened, and Dianne herself was worried that perhaps Koko’s sickness had developed into pneumonia. The last few days the poor woman had struggled with a deep, painful cough and a tightness in her chest that left her breathless.

“Maybe the coughing has brought things on,” Dianne suggested. Bram’s brow wrinkled. “She’s just so weak. I hate to see her like this.”

Dianne squeezed his arm. “It’s not the best thing for the baby to come early, but these things can’t always be helped.” By Koko’s calculations, the baby wasn’t due for another four or five weeks. Dianne could only pray the baby would settle down and wait out the time. The frontier was hard enough on children. “I’ll see what I can do for her.’