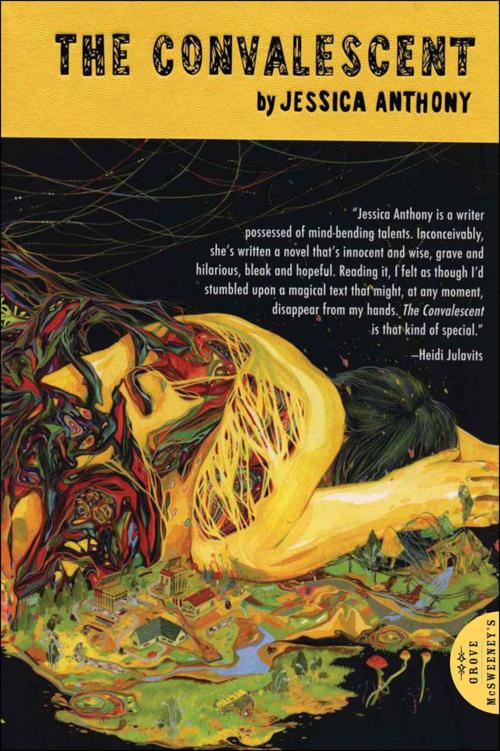 Praise for
The Convalescent:

“[Rovar] belongs in the bus the same way his ancestors belonged on the sidelines of history, numbers dwindling during the many invasions of Hungary, the birth of the Austro-Hungarian Empire, the death of Franz Ferdinand, the German occupation of Hungary and the Soviet occupation of Budapest, until there is only one Pfliegman left, Rovar, who, faced with extinction, instead finds himself reborn in the most awkwardly beautiful of ways.”

“A breathtaking and wholly captivating world. Anthony blends modern Americana, existential musing, absurdism, and history, and grounds it all with the ever present voice of our narrator, Rovar. This voice is her greatest triumph, and the center around which the rest of the book revolves. We are able to see the constant stream of thought of a man who sees everything and says nothing, who records that which the rest of the world forgets, and who sees our world from a wholly unique perspective.”

“
The Convalescent
is a fleshy fable spinning in and out of its own enormous, fabulous history. It is lush, cranky, and powered by dark, sweet humor. Mesmerizing. And a lot of fun. I enjoyed it completely.”

“By the time you come to leave Anthony’s curiously warped world of grumpy mute dwarves, medieval giants, and packaged meat, you’ll find yourself wishing that real life was actually this vibrant and colorful.”

Rovar’s explanation of his family sprawls deep into the past, probing beyond his chaotic childhood all the way back to the origins of the Pfliegman clan in pre-medieval Hungary. Along the way, the narrative nods to all sorts of greats—Kafka, Rushdie, Darwin, and Grass, to name a few. But Anthony’s style—funny, immediate, and unapologetically cerebral—carves out a space all its own.”

All rights reserved. No part of this book may be reproduced in any form or by any electronic or mechanical means, including information storage and retrieval systems, without permission in writing from the publisher, except by a reviewer, who may quote brief passages in a review. Scanning, uploading, and electronic distribution of this book or the facilitation of such without the permission of the publisher is prohibited. Please purchase only authorized electronic editions, and do not participate in or encourage electronic piracy of copyrighted materials. Your support of the author’s rights is appreciated. Any member of educational institutions wishing to photocopy part or all of the work for classroom use, or anthology, should send inquiries to Grove/Atlantic, Inc., 841 Broadway, New York, NY 10003 or [email protected]

for Bunky, with Love and Squalor

For many years I had been lonely.
Then many people visited.
I’d have been happy if they’d stayed.
You are alone, was what they said
.

On June 15, 1985, at 3:42 p.m., a six-point-seven magnitude earthquake hit Puebla, Mexico, destroying two hundred and ninety churches, three hundred schools, and four thousand houses, leaving fourteen people dead and over fifteen thousand homeless. Among the living was a young girl named Adelpha Salus Santino who, after digging through rubble at the old Vehiculos Automotores Mexicanos factory to find both of her parents suffocated, picked up a dusty knife, held it to her middle, and then stabbed herself quick in the stomach. She was rushed to the emergency room by paramedics who, when they could find no identification, asked the girl
¿Como te llamas?
to which Adelpha Salus Santino replied, “Mariposa,” which means butterfly.

At the exact same moment, a team of astronomers at L’Observatoire de Paris witnessed the birth of a star ten times the size of our sun. The star was located in the center of a nebula formerly obscured by dust and gasses, but when winds produced by the newborn star cleared the debris, its unusual shape could be seen for the first time. At 3:42 p.m., one of the astronomers excitedly observed that the nebula possessed two round, adjoining clouds instead of the regular single cloud, and named it Papillon, which is French for butterfly.

Back on earth, a thousand miles north of Mexico, Ms. Mary Pierce, a single, middle-aged woman with an acute case of agoraphobia, was standing at the front door of her two-bedroom ranch home in a suburb of Youngstown, Ohio, wringing her hands to keep them from shaking. She was trying to summon the courage to open the door and go outside when the mail slot flew open, and through it the mailman shoved a promotional copy of
Explore Other Galaxies
magazine. At 3:42 p.m., trembling, Ms. Pierce opened the magazine. A brown butterfly spun out from underneath the pages. Specifically, the butterfly was an
Adelpha salus
, which is known only to remote regions of Mexico. Lepidopterists call it “Lost Sister.”

Also on this day in history, on June 15, 1985, at 3:42 p.m., my parents, János and Janka Pfliegman, drove their car into a telephone pole on Back Lick Road in Front Lick, Virginia, dying on impact. They didn’t own the car; the car they owned was a 1963 Rambler American station wagon, assembled at the Vehiculos Automotores Mexicanos factory in Puebla, Mexico. The Rambler had given them transmission trouble, and they’d left it, abandoned, by the side of Back Lick Road. The car they were driving was a shiny red Ford Mustang that belonged to a nearby rental agency called Galaxy Car Rentals, which had opened its doors on the cool morning of April 8, 1973, the day that I, Rovar Ákos Pfliegman, was born.

I have no life. I have no known relatives, no known friends. No church, no office. No warm and embracing community. No formal education.

I sell meat out of a bus.

I consider myself to be a Hungarian. My grandfather, Ákos Pfliegman, was born in Szolnok, Hungary, in the county Szolnok, and the name Ákos is a Hungarian name. It’s pronounced AH-kosh, and it means “white hawk.” My last name, however, is German. It’s pronounced FLEEG-man, and comes from the German derivation
fliegendenmann
.

As a Hungarian, there are times I would prefer a Hungarian last name,
but my ancestors were given the name a very long time ago. The closest Hungarian translation of the Pfliegman name that I’ve found is “Csupaszárnyrepül

So Pfliegman works just fine for me.

Besides, for centuries historians have bickered about where the Pflieg-mans actually come from. If you want to be technical about it, technically I’m part Hungarian, part German, part Illyrian, part Celt, part Mongol, part Turk, and part Ugrian. As Grandfather Ákos once said, “To be a Pfliegman is a collective neurosis.”

All I can say is that I was born in a town called Front Lick, and my parents were also born in Front Lick, and I’m probably more Virginian than anything anyway, though that has yet to be officially decided: for if to be a Pfliegman is a collective neurosis, to be a Virginian is a quite singular neurosis, and neither leaves much hope for me. After all, I am a man who lives in a bus. A bus in a field. A field by a river—

The bus used to be called
PFLIEGMAN’S TRAVELING MEAT BUS
. I’d drive to people’s houses and offer them large-quantity discounts, until one day the engine coughed and sputtered. I veered off the road, into this field, and painted over the
TRAVELING
. So now people come to
PFLIEGMAN’S MEAT BUS
to buy their meat. They come because my meat is very fresh. The freshest in the state. I’ve turned over the horsefields behind the farmhouse to the cows, pigs, and sheep, which I raise to slaughter. I am thirty-four years old. A self-made man.

I have an awning.

Sometimes the Virginians will stand beneath the awning and look at the bus. They’ll pinch their faces. They’ll turn to me and say, “You
live
here?”

Which is fine. The outside of the old school bus is not impressive. It’s got four flat tires, busted directionals. The headlights stare off in one direction, like a person with a broken neck—

But the inside of the bus is pleasing: it’s warm and dry, the color of hospital gowns; the ceiling is low, divided into several dome-shaped panels; a clean gray corrugated rubber flooring runs the length of it, all the
way from the driver’s seat to the Emergency Exit door; and the windows are all perfectly functioning, eleven on each side.

Underneath the windows I added some wooden paneling to give it a classic look, like I saw in the magazine
This Bus Is My Home
. The magazine said that today one in every three hundred people live in an RV. It also told me that many people live in refashioned school busses like mine. All in all, it’s a “perfectly normal life-choice,” said the magazine, and nobody who lives in a bus should be made to feel bad about it, like it was a socially awkward thing to do.

To prove that bus-living isn’t socially awkward, the magazine had all these pictures of people in their homemade busses, standing in the center of their accoutrements, smiling amidst the here and there: the toaster ovens and microwave ovens, televisions and stereos, heating devices, cooling devices, and staying-the-same-temperature devices. “See?” the magazine said. “It’s all portable. Just imagine being able to take your whole life with you, from place to place.”

But my bus is not an experiment in an efficient, portable life; it’s an experiment in stasis. There’s a less sophisticated assortment of here and there: a sink attached to a rusty drainage pipe that keeps the water going where it’s supposed to go, an electric stove with one working burner, and a tall white meat refrigerator for storing the meat.

I’ve looked for a magazine called
This Broken-Down Bus Which I Inhabit Like a Small Woodland Creature Is My Home
. I haven’t had much luck.

But after seeing how the Bus People color-coordinated the interiors of their busses, I was inspired. I bought some bathing towels from an Indian when he was passing through. He was wearing a cowboy shirt and loafers, and a long black ponytail swung down his back. His grandmother, he said, was in textiles. He reached into his bag and handed me two blue towels with yellow pom-poms. “They’re slightly stained,” he said, and looked around. “What’s with the bus?”

When I didn’t answer, he just shook his head and said, “White people.”

What else—I have a few pots and pans, a wool blanket half-shredded from the moths that come scouting at night, and a big pink sweatshirt that says Disneyland. The sweatshirt was given to me by a Virginian who was buying some meat. She was wearing the sweatshirt, and she was
with her family, and they were also wearing sweatshirts. First she thought I was charming.

The Queen: The Epic Ambition of Hillary and the Coming of a Second "Clinton Era" by Hugh Hewitt
Resonance 4th Edits - Bleeding Worlds Bk 3 by Justus R. Stone
Longbourn by Jo Baker
Cosmocopia by Paul Di Filippo
Keeping It Secret by Terry Towers
Driven: The Sequel to Drive by James Sallis
The Tale of the Pie and the Patty Pan by Beatrix Potter
The Quality of Silence by Rosamund Lupton
They Rode Together by Tell Cotten
The Last Bride in Ballymuir by Dorien Kelly