Tags: #Translated From the Arabic By the Author

The Corpse Washer (The Margellos World Republic of Letters) 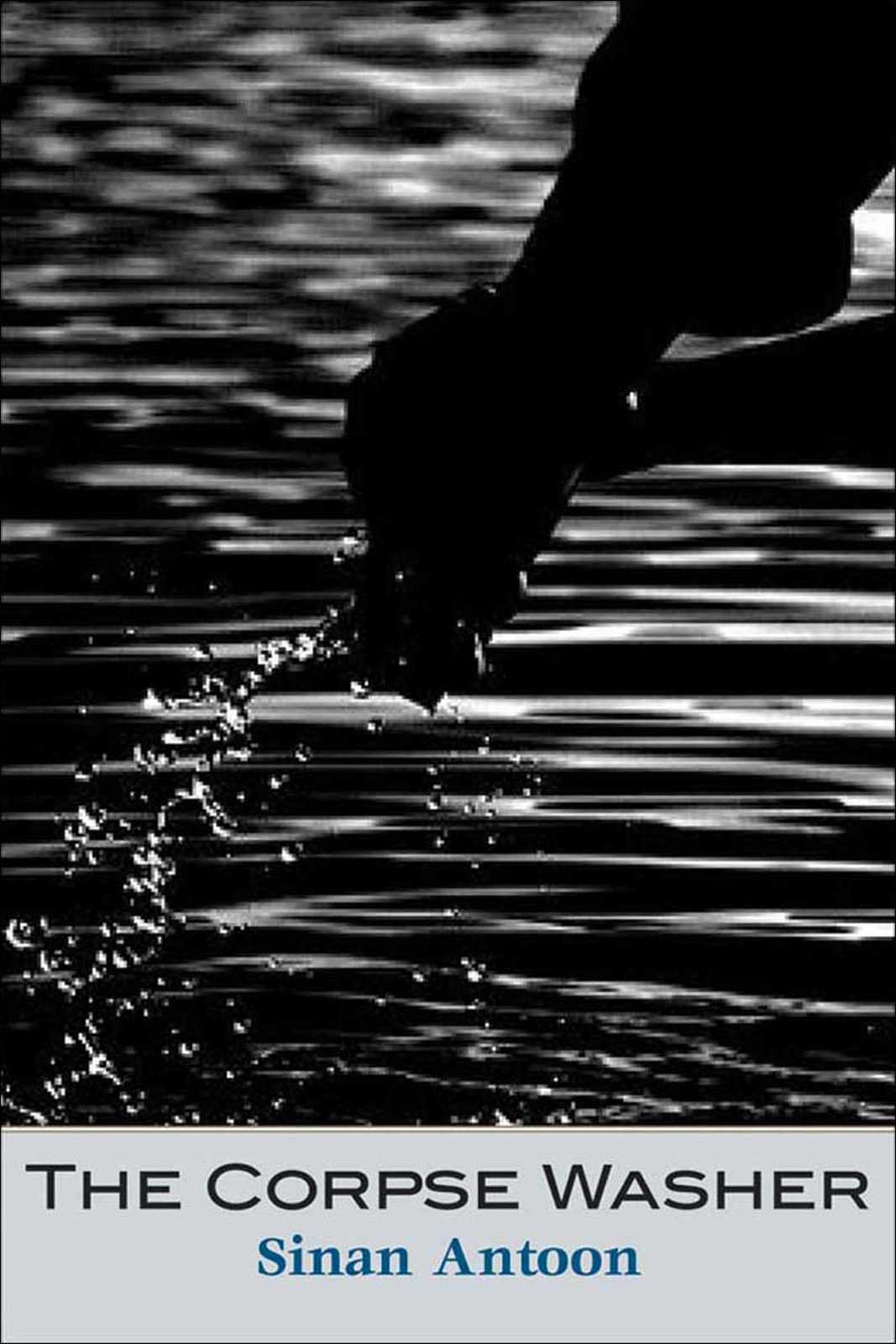 TRANSLATED FROM THE ARABIC BY THE AUTHOR

The Margellos World Republic of Letters is dedicated to making literary works from around the globe available in English through translation. It brings to the English-speaking world the work of leading poets, novelists, essayists, philosophers, and playwrights from Europe, Latin America, Africa, Asia, and the Middle East to stimulate international discourse and creative exchange.

Copyright © 2013, 2010 by Sinan Antoon. First published in 2010 in Arabic as
Wahdaha Shajarat al-Rumman
by al-Mu’assasah al-Arabiyya lil-Dirasat, Beirut, Lebanon. All rights reserved. This book may not be reproduced, in whole or in part, including illustrations, in any form (beyond that copying permitted by Sections 107 and 108 of the U.S. Copyright Law and except by reviewers for the public press), without written permission from the publishers.

Set in Electra type by Keystone Typesetting, Inc. Printed in the United States of America.

The corpse washer / Sinan Antoon; translated from the Arabic by the author.

This paper meets the requirements of ANSI/NISO Z39.48-1992 (Permanence of Paper).

“A poem is never finished, only abandoned,“’ according to Paul Valéry. This is often true. Can one say the same about a novel?

Novels do end, of course, with the last word on the last page. But even before becoming a writer I always wondered as a young reader about the lives and trajectories of events after the act of reading comes to an end. As a novelist I still wonder what became of my characters. Alas, there is no way to communicate with them. I know more about the characters and the events than I have written on paper, but I don’t know everything.

Novels inhabit a liminal space between the real and the imaginary. The experience of translating my own novel has allowed me to return to that space and to inhabit it once again, temporarily. This time, however, the characters spoke English. Their lives (and deaths) did not change at all, but they said a few words here and there differently and left a few others unsaid.

All this is to say that when the translator inhabits the body and being of the author, s/he is given unique privileges that are otherwise denied or frowned upon.

In both gardens are fruit, palm trees, and pomegranates

She is lying naked on her back on a marble bench in an open place with no walls or ceilings. There is no one around and nothing in sight except the sand. I, too, am naked, barefoot, dumbfounded by everything around me. I can feel the sand under my feet and a cool wind. I move slowly toward the bench. When and why has she come back after all these years? Her long black hair is piled about her head. A few locks cover her right cheek, as if guarding her face, which has not changed with the years. Her eyebrows are carefully plucked, and her eyelids, which end in thick eyelashes, are shut. Her nose guards her lips, which bear pink lipstick as if she were still alive. Her nipples are erect; there is no trace of the surgery. Her hands are clasped over her navel; her fingernails and toenails are painted the same pink as her lipstick. Her pubic hair is shaved.

I wonder whether she is asleep or dead. I am afraid to touch her. I look into her face and whisper her name, “Reem.” She smiles, her eyes still shut at first. Then she opens them, and the blackness in her pupils smiles as well. I can’t grasp what is going on. I ask in a loud voice, “Reem, what are you doing here?”

I am about to hug and kiss her, but she warns me: “Don’t kiss me. Wash me first so we can be together and then … ”

“What? You are still alive?”

“Wash me so we can be together. I missed you so much.”

“Wash me, darling … Wash me so we can be together.”

“With what? There is nothing here.”

Raindrops begin to fall, and she closes her eyes. I wipe a drop off her nose with my index finger. Her skin is warm, which means she is alive. I start to caress her hair. I will wash her with the rain, I think. She smiles as if she’d heard my thought. Another drop settles above her left eyebrow. I wipe it off.

I think I hear a car approaching. I turn around and see a Humvee driving at an insane speed, leaving a trail of flying dust. It suddenly swerves to the right and comes to a stop a few meters away from us. Its doors open. Masked men wearing khaki uniforms and carrying machine guns rush toward us. I try to shield Reem with my right hand, but one of the men has already reached me. He hits me in the face with the stock of his machine gun. I fall to the ground. He kicks me in the stomach. Another starts dragging me away from the washing bench. None of them says a word. I am screaming and cursing them, but I can’t hear myself. Two men force me to get down on my knees and tie my wrists with a wire behind my back. One of them puts a knife to my neck; the other blindfolds me. I try to run away, but they hold me tightly. I scream again, but cannot hear my screams. I hear only Reem’s shrieks, the laughter and grunts of the men, the sound of the rain.

I feel a sharp pain, then the cold blade of the knife penetrating my neck. Hot blood spills over my chest and back. My head falls to the ground and rolls like a ball on the sand. I hear footsteps. One of the men takes off my blindfold and shoves it into his pocket. He spits in my face and goes away. I see my body to the left of the bench, kneeling in a puddle of blood.

The other men return to the Humvee, two of them dragging Reem by her arms. She tries to turn her head back in my direction, but one of them slaps her. I cry out her name but can’t hear my voice. They put her in the back seat and shut the door. The engine starts. The Humvee speeds away and disappears over the horizon. The rain keeps falling on the empty bench.

I woke up panting and sweating. I wiped my forehead and face. The same nightmare had been recurring for weeks, with minor changes.
Sometimes I saw Reem’s severed head on the bench and heard her voice saying, “Wash me, darling,” but this was the first time there was rain. It must have slipped into my dream from outdoors. I could hear drops on the window next to my bed.

I’ve slept only three hours after a long and grueling day. I am worn out.

Death is not content with what it takes from me in my waking hours, it insists on haunting me even in my sleep. Isn’t it enough that I toil all day tending to its eternal guests, preparing them to sleep in its lap? Is death punishing me because I thought I could escape its clutches? If my father were still alive he would mock my silly thoughts. He would dismiss all this as infantile, unbecoming to a man. Didn’t he spend a lifetime doing his job day after day, never once complaining of death? But death back then was timid and more measured than today.

I can almost hear death saying: “I am what I am and haven’t changed at all. I am but a postman.”

If death is a postman, then I receive his letters every day. I am the one who opens carefully the bloodied and torn envelopes. I am the one who washes them, who removes the stamps of death and dries and perfumes them, mumbling what I don’t entirely believe in. Then I wrap them carefully in white so they may reach their final reader—the grave.

But letters are piling up, Father! Tenfold more than what you used to see in the span of a week now pass before me in a day or two. If you were alive, Father, would you say that that is fate and God’s will? I wish you were here so I could leave Mother with you and escape without feeling guilty. You were heavily armed with faith, and that made your heart a castle. My heart, by contrast, is an abandoned house whose windows are shattered and doors unhinged. Ghosts play inside it, and the winds wail.

As a child, I would cover my head with a second pillow to block out noise. I look for it now; it has fallen by the bed next to my slippers. I pick it up and bury my head under it in order to reclaim
my share of the night. The image of Reem being dragged away by her hair keeps returning.

Reem hadn’t been at the heart of my nightmare until a few weeks ago. Where was she now? I heard a few years ago that she was in Amsterdam. I’ll Google her again tomorrow when I go to the Internet café after work. I’ll try a different spelling of her name in English and maybe I’ll find something. But can I just grab a bit of sleep for an hour or two?

I stood next to my mother on the steps in front of the big wooden door. Her right hand firmly clasped my right hand, as if I were about to run or fly away. Her left hand carried the
sufurtas
in which she packed my father’s lunch—three small copper pots, each stacked on top of the other in a metal skeleton resembling a little metal building. The top pot was filled with rice. The middle one with okra stew and two pieces of meat. The lower pot usually had some fruit. That day she’d put in a tiny bunch of white grapes, the kind we call “goat nipples,” that my father liked. There was a warm loaf of homemade bread in the nylon sack dangling from her left wrist. She put her left foot on the steps and temporarily released my hand to knock four times. Her strong knocks pushed the door open. She pretended not to see the young man squatting a few steps away from the door with his back to the wall. He was wearing black. His head was buried in his hands and he looked like he was wailing. Smoke rose from the cigarette in his left hand. That was the first time I’d seen a grown man cry.

I looked into my mother’s coffee-colored eyes. In a hushed voice, I asked, “Why is this man crying?”

She put her index finger on her lips to shush me and whispered, “Don’t be rude, Jawad!”

I craned to the left, curious to see what was happening inside. It was the first time my mother had taken me to my father’s place of work. He usually took the
sufurtas
with him in the morning, but that day he had forgotten to bring it along.

Hollow Mountain by Thomas Mogford
Legatus Legionis: Book Two in the Gaius Claudius Scaevola Trilogy by Miller, Ian
Billion Bear (Billionaire Werebear Shifter Paranormal Romance Standalone) by Luna Noir
Calamity Town by Ellery Queen
A Spark Unseen by Sharon Cameron
In the Beauty of the Lilies by John Updike
Witness Bares All by Abby Wood
Mr. Darcy's Dream by Elizabeth Aston
Her Ladyship's Girl by Anwyn Moyle
Because You Are Mine Part V: Because I Said So by Beth Kery