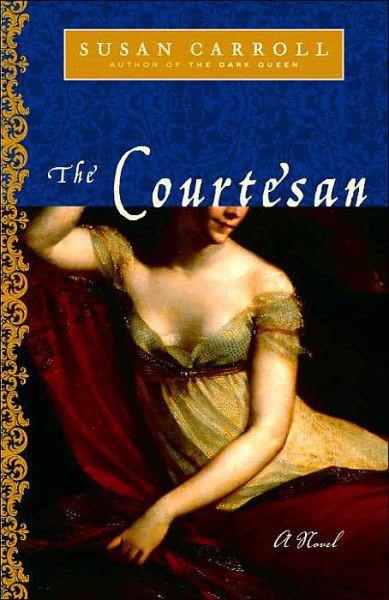 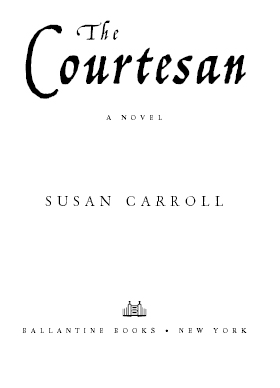 Other Books by Susan Carroll

Read on for a sneak peak at Miri’s story, the next captivating novel in the Cheney Sisters Trilogy!

This one is for my real-life heroes:
My big brother, Tony, and my outlaws, Jerry, Tom, and Pete.
Love you guys, always.

M
ist rose off the Seine, the ghostly vapor drifting over the banks of Paris, obscuring streets that were already a labyrinth in the fading light. But the woman stealing through the haze appeared oblivious to both the perils of becoming lost and the damp chill of the autumn evening.

Shrouded in a hooded gray cloak that fell to her ankles, her face was hidden behind a black velvet mask, the kind court beauties used to shield their complexions. It completely shielded her identity as well, only the sparkle of her eyes visible and a few blond wisps of hair. Wooden pattens protected her brocade shoes from the dirt of the streets as she marched forward with a sure step, unaware of the man who followed her.

Captain Nicolas Remy hung back as far as he dared without losing sight of the lady in the misty evening. He was clad in a dark jerkin and black venetians that blended with the oncoming night. His worn garments and his dusty boots appeared to have seen better days, as had the captain himself. Tangled dark blond hair spilled across his brown eyes, his lean features obscured by a heavy beard that had been allowed to run wild. With both sword and dagger affixed to his belt, he was a dangerous-looking man, even by the standards of Paris.

Passersby gave him a wide berth, making it difficult for him to lose himself in the crowd as he dogged the footsteps of the lady in gray. The streets were swiftly emptying of all other company. Artisans and street vendors scurried for home. Shutters of shop fronts slammed shut, all of respectable Paris retreating behind locked doors.

Captain Remy would soon stand out like a lone soldier left surviving on a battlefield, but he could not risk putting any more distance between himself and the woman. She had a distinct advantage. She
knew
where she was going.

Any knowledge he had ever had of this cursed city, he had done his best to forget. Remy was not only unfamiliar with the streets, he was not even certain he was following the right woman. He angled a glance at his companion, a rangy youth of about eighteen years who went by the sobriquet Martin le Loup.

A fitting name, Remy thought. The lad bore much of the aspect of a wolf with his mane of sable-colored hair, sharp features, and green eyes. Although the Wolf styled himself as an “adventurer, a gentleman of fortune,” he looked regrettably more like what he was, a scoundrel and a cutpurse. But Remy would have trusted the boy with his life. He already had on many occasions.

However, this time he wondered if his clever Wolf had made a grave mistake. As the woman led him deeper into narrower streets, Remy tensed with the apprehension that he was being led into the sort of trap laid for many an unwary traveler in Paris, lured on by a beautiful woman only to be set upon and robbed.

Remy’s hand shifted to the hilt of his sword and he muttered to his youthful guide, “Are you certain that this is the lady I sent you to find? Because if you’ve made some sort of mistake—”

“No mistake, Captain!” Wolf protested, looking wounded that Remy should doubt him. “I swear on the grave of my father . . . or at least I would if I knew who he was. That is indeed the lady you asked me to seek, your Mistress Gabrielle Cheney.”

Remy allowed himself a moment of regret. No, she had never been his Gabrielle, nor was she ever likely to be.

“She is said to be the most dazzling woman in all of Paris,” Wolf said, kissing his fingertips. “Do you recognize nothing about her?”

Remy’s eyes narrowed, studying the distant form of the cloaked woman. He tried to discern some familiar gesture or movement of the young enchantress he had once known. But it had been over three years since he had last seen Gabrielle, not since that long-ago summer in that mysterious place known as the Faire Isle.

He had heard that Gabrielle had changed, the warm, passionate girl transformed into a woman, seductive and dangerous. They said that she was consumed with cold ambition. They said that she had grown more adept at intrigue than the Dark Queen, Catherine de Medici herself. They said . . .

Remy’s mouth set in a terse line. He simply did not want to believe all the things that were being said of Gabrielle. It was far too painful. But he could hardly escape the fact that people who ventured abroad at this hour were either remarkably careless of their lives or else bent upon some purpose that would not bear the light of day.

So which was true of Gabrielle? All he had to do was overtake her and ask her. But he was reluctant to do so. After so long an absence, he didn’t want their reunion to take place here in the street. She believed him to be dead and perhaps it would be better if he remained that way.

“Just let her go,”
something inside him urged.
“Don’t entangle her in this desperate quest that your life has become.”

The voice was a faint echo of the man he’d once been, honorable and chivalrous. But any nobility inside him had been killed that hot August here in Paris, three years ago, a night of blood, betrayal, and madness. The mere thought of St. Bartholomew’s Eve was enough to make his stomach clench, his brow go cold with sweat.

Remy thrust the nightmarish memories aside and continued doggedly after Gabrielle. Despite the risks, he needed Gabrielle Cheney’s help with the dangerous enterprise that had brought him back to the city. But first, he needed to be sure of her.

As Gabrielle stalked onward, the houses towering around them grew more decrepit, the street more filthy. Little as Remy knew of Paris, it was obvious even to him they were plunging into one of the less savory quarters of the city.

Beside him, Wolf growled in a low voice, “The rue de Morte? Have a care, monsieur. Even the worst of rogues dread to come here by night. Your lady must be quite mad to venture here alone, without even the company of her maid. Has she always been this reckless?”

“Always,” Remy murmured with a grim smile. At least that much about Gabrielle had not changed. “She once stole my sword and prepared to fight an entire cadre of—”

“A cadre of what?” Wolf asked with great interest.

Remy already regretted his impulsive words. The doings on Faire Isle that summer had been strange enough to him. If he were to recount some of those tales, even the insouciant Wolf would become alarmed.

Remy was spared the necessity of answering when they lost sight of Gabrielle in the mists. Both he and Wolf came to an abrupt halt, listening. The street was clear of the daytime clatter from the traffic of carts, horses, and mules. Remy could hear the hollow echo of Gabrielle’s shoes in the distance.

“There!” Wolf pointed across the street.

The rising moon pierced the clouds enough for Remy to make out Gabrielle’s shadow. She approached the iron gates of what had once been a great manor done in the Gothic style, set behind high stone walls, the gatehouse flanked by pepperpot turrets. The rambling stone house bore a ghostly aspect in the moonlight and mist, many of the windows boarded over, the garden wall crumbled and broken in places.

Nearby lots were vacant despite the current rage for construction that had seized hold of Paris. The house stood isolated as though the rest of the city shrank from drawing too near.

“The—the Maison d’Esprit.” Wolf whispered, pointing a trembling finger in the direction of the imposing house.

“What! You know this place?”

Wolf gave a jerky nod, his eyes full moons in the sharp oval of his face. “The place . . . it—it has a dreadful reputation, monsieur. The house once belonged to a powerful bishop who fell under the spell of a witch. She enchanted him, caused him to fall desperately in love with her, forget all his holy vows. He made her his mistress, kept her hidden away in this house for many years. She even bore him children, daughters like herself, evil witches.”

Wolf shuddered. “Finally one of the bishop’s servants summoned the courage to inform the authorities. Witch-hunters raided the place, seized the sorceress and her daughters, dragged them away to be executed. Everyone thought that would break the spell for the bishop, but the poor man hanged himself in the garret, driven mad by the witch.”

Wolf rolled his eyes heavenward and crossed himself. The boy had a penchant for high drama and enjoyed terrifying himself with any legends he chanced to hear, the more gruesome the better.

If Gabrielle was familiar with the story, it hadn’t daunted her. Remy made out her cloaked figure heading straight up to the gates. After a moment’s hesitation, Remy risked getting closer. Moving stealthily across the street, he positioned himself behind an ancient oak in one of the vacant lots.

Wolf scrambled after him, not so quietly. Remy shot the boy a quelling frown. The dark house waited in the distance, a silent shadow, not a sign of life stirring. What could Gabrielle possibly want in this wretched place?

“Who lives there now?” Remy demanded in a low aside to his companion.

“No one,” Wolf whispered hoarsely. “The place is haunted and cursed besides. Before she died, the witch declared that anyone who ever enters these grounds would go as mad as her lover did.”

Remy didn’t believe in curses, but there was something disquieting about the abandoned manor that caused the back of his neck to prickle. He felt an odd sense of relief when Gabrielle passed by the iron gates.

But Remy should have known locked gates would not be enough to stop Gabrielle Cheney. She moved along the stone wall until she found a large break. With a furtive glance over her shoulder, she gathered up her skirts and climbed through. As she vanished from sight, Remy stepped out to follow.

Wolf frantically seized hold of his arm. “No, Captain! You must not go in there after her. The place is cursed, I tell you.”

“Don’t be absurd, boy.” Remy attempted to shake him off, fearing that he might lose Gabrielle, not to any curse, but to the mist and darkness.

“Ah, please, Captain! Don’t you see that it is too late? Your lady must already be seized with madness or else why would she go into that terrible place?”

Why indeed? Remy had no idea what would draw Gabrielle to this neglected wreck of a house, but he intended to find out. However, it was clear he would have to go on alone. Wolf was not indulging his usual flair for melodrama. The boy’s terror was genuine, his face pale, his fingers trembling. Wolf might not flinch from tangling with the fiercest brigand, but he had a deathly fear of anything hinting at the supernatural.

As Remy pried the boy’s fingers loose and commanded Wolf to wait behind, his conscience pricked him because he knew he had been less than honest with the lad. When he had first sent Wolf to find Gabrielle Cheney, there was one significant fact Remy had neglected to tell him.