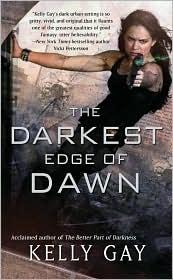 The Darkest Edge of Dawn
is the electrifying sequel to

T
HE BETTER PART OF DARKNESS

... the acclaimed debut from
"star on the rise" (Night Owl Romance)
Kelly Gay!

"This gritty urban fantasy ... is extraordinary."

"Intricate world-building and richly complex characters mix with a fast-paced plot to create a standout start to a new series."

"What sets this book apart, besides the great writing and the unique world-building, is the fact that our heroine is a single mom. ... The love and protectiveness of a mother for her child as well as her family just gave so much depth to the situation as well as a real sense of urgency."

"Charlie Madigan is an awesome character. ... I could not put this book down."

"Her dark urban setting is so gritty, vivid, and original that it flaunts one of the greatest qualities of good fantasy: utter believability. ... Kelly Gay whisked me into a dangerous world and made me want to stick around. ... I can't wait to spend more time with Charlie Madigan."

The Darkest Edge of Dawn
is also available as an eBook

The Better Part of Darkness 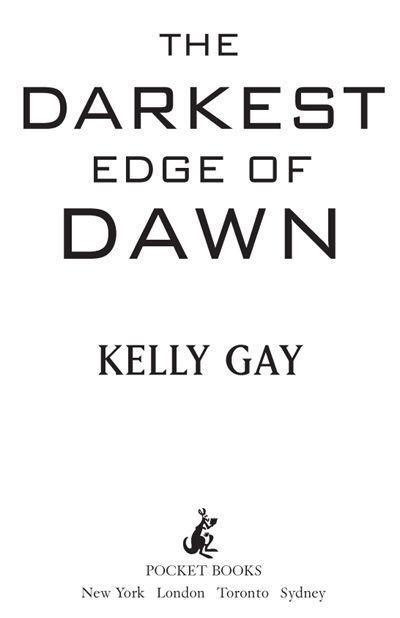 This book is a work of fiction. Names, characters, places, and incidents either are products of the author's imagination or are used fictitiously. Any resemblance to actual events or locales or persons, living or dead, is entirely coincidental.

All rights reserved, including the right to reproduce this book or portions thereof in any form whatsoever. For information, address Pocket Books Subsidiary Rights Department, 1230 Avenue of the Americas, New York, NY 10020.

They say that at dawn, on the winter solstice, the
top of Helios Tower burned brighter than the
sun and dragons fell from the sky
...

From the journal of Emma Garrity

With my right leg bent at the knee, foot poised in the air, and my fingers grasping the brick ledge below the broken window, I turned just enough to fire a withering glare at my partner. "Hank! A little help here?"

My eyes narrowed to slits as he stood there frowning at me like usual. I shook my foot at him and reached higher, my arm and shoulder muscles burning. "Oh, just forget it," I muttered, dropping my hands from the ledge and hopping back, giving my partner a push toward the window. "You're taller, you try."

A dark blond eyebrow rose, and he shifted his weight onto one foot. Two seconds passed before he let out a dubious sigh and graced the world with his rich baritone. "I'm going to take a wild guess, Charlie, and say the chief doesn't know about our afternoon detour."

I glanced at the derelict parking lot, forcing down a shiver. "Your powers of observation are mind-blowing."

"I have been called 'mind-blowing' once or twice," he said, completely ignoring my sarcasm as he removed a few chunks of broken glass from the bottom window frame.

"Once or twice, that's all?" I teased. "Wouldn't go around admitting that if I were you. Might give all sirens a bad name."

He shot a glower over his shoulder. "I was
trying
to be modest. Now, if you want to get technical, the number is quite--" The light atop the corroded steel pole behind us blinked out with a loud electrical buzz.

The unusually mild December wind sent brittle leaves dancing like skeletons over the concrete parking lot. The echoes of their skip and scratch made the warehouse district seem even more desolate and remote despite the distant sounds of Atlanta's midday traffic. "Let's just get in and get out. This place gives me the creeps."

The light sizzled back to life, illuminating the heavy gray clouds undulating above us like white-water rapids in slow motion. Occasionally a bottle-green flash would light up the sky--silent and strange--each burst never quite the same. I frowned, wondering if I'd ever get used to the darkness that hung above the city for the last two months.

"Why the hell did Ebel-whatever-his-name-is lock the place back up?" Pieces of glass hit the concrete and shattered into small bits as Hank finished clearing the window.

"It's Ebel
wyn,
" I said. "And I doubt he was thinking straight. You know ... saw dead body, ran, locked the door behind him. That's what real estate agents do; they lock the door behind them. Creatures of habit, I guess."

"Could've told him to meet us here with the key."

"I did. He was so spooked, he wouldn't come back."

The tip I received earlier had come from a darkling fae, a Charbydon who'd stopped by the warehouse to check out the property and put up a
For Sale
sign. Not surprising he hadn't called the ITF--relations between Charbydons and law enforcement were on pretty shaky ground right now, as were relations between Charbydons and Elysians. The darkness made everyone edgy. Anyone with a scrap of common sense would've known calling the ITF to report an Elysian body inside of a Charbydon-owned property meant trouble.

Hank moved aside and brushed his palms lightly over his cargo pants. "The window is too small for me to fit through. You'll have to go."

He bent low, linking his fingers together to hoist me up. I placed both hands on the cool leather jacket that covered his shoulders and put my foot in the cradle of his hands, getting a whiff of the same herby scent that perfumed The Bath House in Underground. I glanced down.

Dark sapphire orbs stared up at me, set in features that remained mostly grim ever since the night his voice-mod had been fused together, stuck on his neck and subduing his greatest power--his siren's call.

Of course the voice-mod did nothing to stifle the sensual quality of his voice or the natural siren magnetism that constantly emanated from him. Nor did it stop him from using his other natural abilities--healing, sensing energies, and being a superb wiseass.

I reached for the ledge. The sharp brick edges scraped my wrists, pulling my attention back to the job at hand. Once up, I balanced on my stomach and swung one leg over, then followed with the other until I was looking down at my partner's upturned face. "I'll see if I can open the side door from the inside. Meet me over there."

"Careful, Charlie," his voice came out low, "there's negative energy all around this place."

I dropped down into the darkness of the two-story warehouse, my boots slapping hard against the concrete floor and echoing through the lofty space. The flap of startled wings sent my heart to my throat, and my hand to my Nitro-gun. It slid from the harness with a comforting whisper.

Regaining my composure, I pulled the standard-issue flashlight from my belt with my free hand and clicked it on, liking the weight and the chill of the metal. I didn't bother looking for a light switch--Ebelwyn had said the lights didn't work, and he'd never made it to the main fuse box to trip the breakers. He'd gotten as far as the body, dropped his flashlight, and ran like hell. And if the flashlight was still on, I couldn't see it from this distance.

The inside of the warehouse was massive, a long, hollow tomb. Owl eyes blinked at me from steel beams high overhead. Part of the ceiling was gone in places, exposing the inside of the warehouse to the elements. Many of the second-story windows were cracked or broken, and the floor was littered with glass, dust, and an odd assortment of trash, wooden pallets, and steel parts.

My light beamed over graffiti--names, faces, cityscapes, and a life-size rendition of Mary Magdalene. On the other wall were the spray-painted symbols of black crafting; pentagrams, spirals, zodiac signs, planetary symbols, and Enochian script.

The warehouse was too deep for my light to penetrate the blackness completely, but I sensed there was something down there--not a physical presence, but something that made my instincts fire off warning signals.

A body. A nymph, I think,
Ebelwyn had said, shaken and breathless over the phone.
Can't fucking miss it.

I focused, using my senses to get a clearer picture of what lurked in the darkness, proud of myself for remembering to try in the first place. Thirty-one years of being human and relying on human instincts made it difficult to switch gears and rely on the off-world abilities I'd recently been given, especially out in the field.