Read The Daughter of Siena Online

The Daughter of Siena 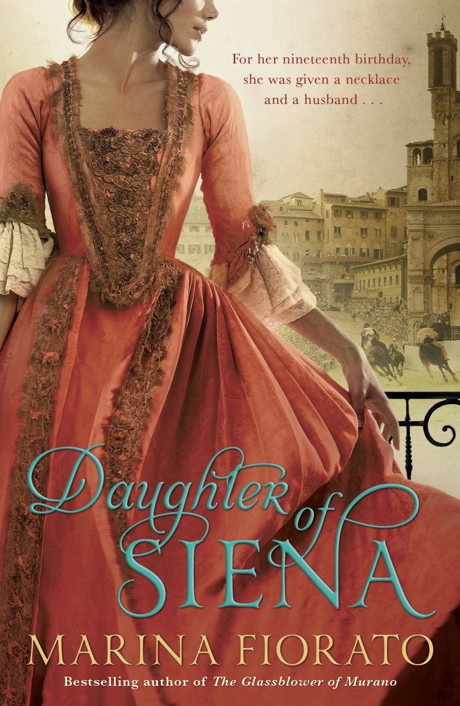 Table of Contents
Title Page
PROLOGUE
-
The Donkey
1
-
The Owlet
2
-
The Tortoise
3
-
The Eagle
4
-
The Wave
5
-
The Panther
6
-
The Forest
7
-
The She-Wolf
8
-
The Goose
9
-
The Unicorn
10
-
The Dragon
11
-
The Giraffe
12
-
The Vale of the Ram
13
-
The Snail
14
-
The Caterpillar
15
-
The Porcupine
16
-
The Tower
17
-
The Shell
EPILOGUE
-
The Sixteenth Day of August 1724
Also by Marina Fiorato
HISTORICAL NOTE
AUTHOR’S NOTE
ACKNOWLEDGEMENTS
THE DAUGHTER OF SIENA
Copyright Page
PROLOGUE
The Donkey
T
wo gentlemen of Siena stared down at a stinking corpse that had been flung over the wall at the Camollia gate.
‘Is it a horse?’ asked the younger, for the body was so decomposed it was hard to tell.
‘No, it’s a donkey,’ answered his elder.
‘Hmm.’ The youth was thoughtful. ‘Whatever can it mean?’
‘Well,’ said the other, who was pleased to be asked, and whose air of the greybeard who knew it all did not endear him to his friends, ‘in 1230 the Florentines who besieged Siena used to throw the corpses of donkeys over the city walls. They hoped the carcasses would bring pestilence and plague.’
The youth pulled his neckerchief swiftly over his nose and mouth. ‘Jesu. D’you think this one is diseased? It stinks enough.’
‘Dio
. It’s not the olden days. Someone’s ass died and they dumped it. No more, no less.’
His companion craned upwards and stroked the beard
that he one day wished to have. ‘I don’t know. Look; there’s some blood and skin on the top of the gate. This fellow was thrown over. Should we tell someone?’
‘Like who?’
‘Well, I don’t know … the duchess? The council, then? Or the Watch?’
The older man turned towards his young companion. He had never known the lad to question with him and felt justified in hardening his tone just a little.
‘The Watch?’ he scoffed. ‘On the eve of the Palio? D’you not think they might have better things to worry about than a dead donkey?’
The boy hung his head. He supposed he was right. It was the Palio tomorrow and the whole city was a ferment of excitement, a ferment that sometimes bubbled over into violence. Nevertheless, he walked backwards for a little until he could no longer see the grisly heap. Intensely superstitious, like all Sienese, he could not help thinking that the donkey was an ill omen for the city. Uneasy little thoughts gathered round his head like the flies that rose from the corpse.
1
The Owlet