Read The Dead Past Online 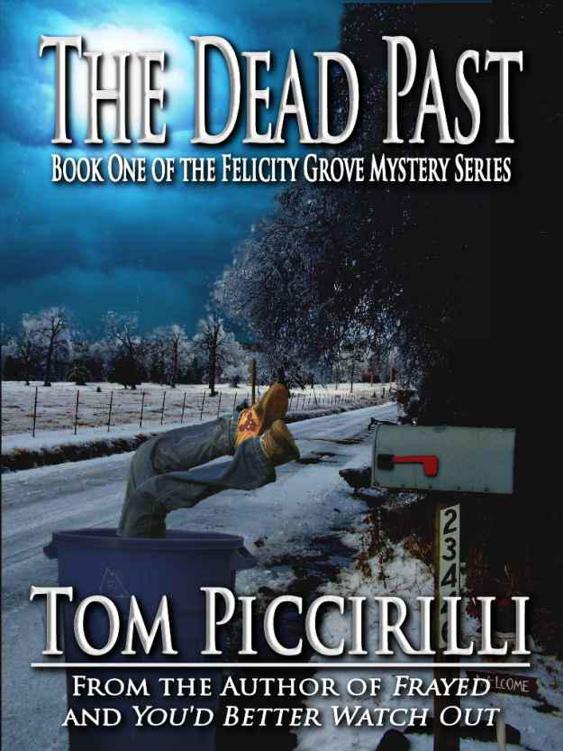 If you're reading this book and did not purchase it, or it was not purchased for your use only, then you should return the vendor of your choice and purchase your own copy.

OTHER CROSSROAD TITLES BY TOM PICCIRILLI:

BUY DIRECT FROM CROSSROAD PRESS & SAVE

Try any title from CROSSROAD PRESS – use the Coupon Code FIRSTBOOK for a onetime 20% savings!

Let the dead Past bury its dead.

—Longfellow,
A Psalm of Life

For Ed Let the dead Past bury its dead.

Gorman and Buddy Howe,
both of whom know the past is only taking a siesta.

A phone call at four in the morning can only mean one of two things: either my ex-wife is on a crying jag about her latest biker boyfriend, or else my grandmother is caught up in something which will probably get me killed.

With great conviction I promised God a fifty percent tithe of my annual net if only I'd hear Michelle's usual complaints about the harsher realities of living with men who wear leather underwear and have BORN TO KILL WIMPS tattooed across their chests.

But the familiar sense of trepidation was already wedged into the pit of my stomach. I cleared my throat, reached over and snatched the receiver before it rang again. "Hello?"

"Jonathan," my grandmother said. "I realize it's quite late and I hate to disturb you at this hour, but there's been trouble here in Felicity Grove."

I did some quick math and figured I should've offered God my gross worth and two certificates of deposit instead. "Anna, there's trouble everywhere if you go looking for it."

That might be the truth, I thought, knowing how she kept to herself and her books most of the time. Still, I wondered how anybody not affiliated with the bomb squad, Mafia, or the CIA could get involved with so much calamity. Especially in a town where the population is less than ten thousand. "Well, whatever. Let the police take care of it. Haven't you learned not to rush into murder cases that have nothing to do with you? After the last time?"

There was a long pause while she turned that one over. "I didn't say anything about murder."

"No, but you wouldn't have phoned me at four in the morning otherwise."

She sighed, and I could hear the soft squeak of tires as she wheeled herself around the kitchen, running the tap and putting tea on. "You need to return home immediately," she stated flatly. "It was presumptuous of me but I've already taken the liberty of calling the airport. The first flight back leaves Kennedy at seven fifty-five this morning. I'll have a cab meet you."

It always sounded so easy to put my entire life on hold when she ordered it in that voice. "I can't close up the store on a moment's notice just because you've gotten your nose stuck in somebody else's business again."

"Last week I bought several rare volumes of
Nicht
Wahr
?
from two German antiquarian collectors. The books are expected tomorrow and I have to be on hand to sign for them."

"Couldn't one of your employees simply forge your name?" she said. "What possible difference would it make to the German sellers?"

None, but I was still half asleep and it was the best excuse I could come up with to keep from doing what I knew I was going to do anyway.

There are times you must go home to a place that is no longer home—and if that's not swinging in full circle, then at least it's moving backwards. Wolfe was wrong: you can never
get away
from home. I stood and brushed the curtains aside from the window, staring at the snow on Amsterdam Avenue glowing with the last strands of moonlight; in an hour it would be a convulsive churning of grime. In New York, February is a month bearing no resemblance to the winters of my childhood. "There's another foot of snow on the ground. That means the drifts are at least four feet high in Felicity Grove."

"Approximately," she said with some bite now. She mistook my moment of sentiment for more arguing on my part. Unlike most of the emotions she kept a tight rein on, disappointment often bled through.

"Please don't try to make me feel guilty because I don't want to come rushing back on a whim, Anna."

The tea pot whistled, and her Rottweiler, Anubis, made slow, stalking sounds across the kitchen tiles. He sounded nervous, and that bothered me. "I wouldn't dream of calling you on simple caprice, Jonathan. I need your help, and not merely for legwork. Besides, nobody can make you feel guilty except yourself."

"That's a self-serving cliché I don't accept. Of course you can do it to me."

My grandmother has a smile that can be heard from across a room. "Really? I hadn't noticed."

"Okay," I said, fully awake. My curiosity was piqued, and if there's one nasty character trait I've inherited from her it's that I'm nosy, too. "Maybe I can take a few days off. Give me an overview, Anna. What's it all about?"

She took a breath and called Anubis to her. "Evidence has been introduced into the death of Margaret Gallagher. The police now believe it may have been a homicide."

Margaret had owned a flower stand at the corner of Monroe and Fairlawn in Felicity Grove for as long as I could remember. I had known her to be a woman with a boisterous laugh, and she had let me skimp a couple bucks on my prom date's corsage. She'd died a few months ago of natural causes. "What evidence? You told me she had a heart attack."

"And so she did, but three days ago a young man named Richie
Harraday
tried to dispense with several pieces of jewelry at a local pawn shop. Unfortunately for him, the owner of the shop had originally sold the pieces to Margaret some months earlier—a silver oval locket, and a smaller, distinctive clover-shaped one. He remembered them quite well because she'd asked him to engrave each with a specific flower pattern. The sheriff was called in, and a subsequent check of her belongings showed the jewelry to be missing. The police suspect that Richie
Harraday
burglarized Margaret's home, and during the robbery she was either attacked or frightened badly enough to have suffered cardiac arrest. If such is the case, then under the Felony Murder Doctrine
Harraday
is responsible for her death and the charge will be murder."

"He told the pawnbroker he discovered the lockets in the park, but when the police performed a more thorough search of Margaret's home, they found that the back screen window had been partially cut through.
Harraday's
prints were all over the inside pane of glass."

"Even so, how could the cops possibly prove he had anything to do with her death?"

"I doubt they could have."

Something in her tone hooked me. "Could have?"

"Yes. Richie
Harraday
fled before he could be arrested. He was already known to the police as a juvenile delinquent. Petty crimes for the most part. Disturbing the peace, car theft and the like."

"I don't get it, Anna. Exactly what do you expect me to do? Hunt this guy down?"

"No, Jonathan," she said, sipping more tea, "that won't be necessary." The dog was whining, something I'd never heard him do before. "Richie
Harraday's
body was found in my garbage can nearly four hours ago."

When I got out of luggage claims I saw Lowell Tully sitting in the airport coffee shop, reading the
Felicity Grove Gazette
and eating a stack of waffles reinforced by a bulwark of sausages. His muscles rippled beneath his brown Deputy's uniform like tectonic plates shifting, the veins in his corded neck bulging. I suddenly wished I'd taken more of an interest in those
Soloflex
commercials.