Read The Death of Santini: The Story of a Father and His Son Online

The Death of Santini: The Story of a Father and His Son

BOOK: The Death of Santini: The Story of a Father and His Son
>>DOWNLOAD HERE >>READ ONLINE NOW
ads 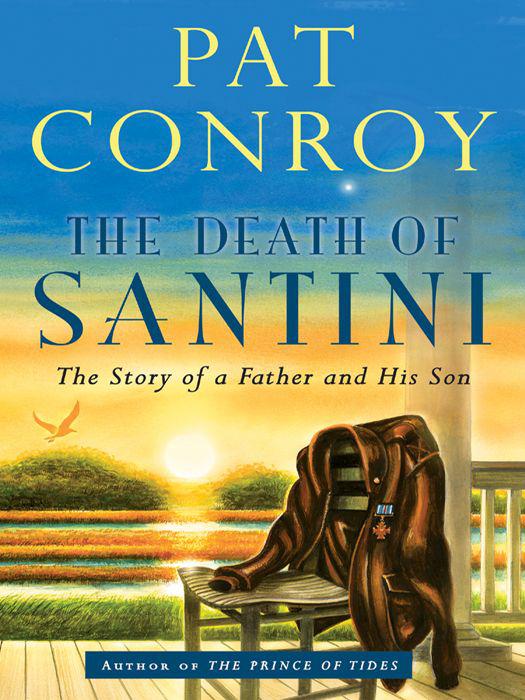 All rights reserved. Published in the United States by Nan A. Talese / Doubleday, a division of Random House LLC, New York, and in Canada by Random House of Canada Limited, Toronto, Penguin Random House Companies.

All insert photographs are courtesy of the author.

This excerpt is published by arrangement with Open Road Integrated Media, Inc. All rights reserved. No part of this excerpt may be reproduced or reprinted without permission in writing from the publisher.

This book is dedicated with love and gratitude to my brothers and sisters:

Carol Ann
, the Conroy family poet and fabulist, the great explainer of it all;

Mike
, the keystone, the calm in the midst of the family storm, the center that always holds;

Kathy
, the family nurse, Santini’s caretaker and confessor, the azalea crafted with iron;

Jim
, our brightest, most brilliant sibling, also our dark and hilarious commentator on the flawed clan;

Tim
, the kindest and sweetest Conroy, a compassionate worker with special needs kids who brought joy into the lives of all he taught;

Tom
, our lost boy and baby brother whose suicide was the mortal wound to the heart of the family and reminded us how bad it really was.

Excerpt from
The Great Santini

I’ve been writing the story of my own life for over forty years. My own stormy autobiography has been my theme, my dilemma, my obsession, and the fly-by-night dread I bring to the art of fiction. Through the years, I’ve met many writers who tell me with great pride that they consider autobiographical fiction as occupying a lower house in the literary canon. They make sure I know that their imaginations soar into realms and fragments completely invented by them. No man or woman in their pantheon of family or acquaintances has ever taken a curtain call in their own well-wrought and shapely books. Only rarely have I drifted far from the bed where I was conceived. It is both the wound and foundation of my work. But I came into the world as the son of a Marine Corps fighter pilot as fierce as Achilles. He was a night fighter comfortable with machine-gun fire and napalm. He fought well and honorably in three wars and at one time was one of the most highly decorated Marine aviators in the corps. He was also meaner than a shit-house rat, and I remember hating him even when I was in diapers.

For a long time, I thought I was born into a mythology instead of a family. My father thundered out of the sky in black-winged fighter planes, every inch of him a god of war. My mother’s role was goddess of light and harmony—an Arcadian figure spinning through the grasses and wildflowers on long, hot summer days. Peg Peek and Don Conroy brought the mean South and hurt Ireland to each other’s bloodstreams.
Peg came from snake-handling fundamentalists in the mountains of Alabama, while Don brought the sensibility of rosary-mad Chicago into a family that would be raised on military bases through the South. But the myths of our lives had no stories to support them. I’ve no memory of my father sharing one story about his growing up in Chicago, while my mother would simply make up stories of her own privileged upbringing in Atlanta. There, she was the belle of the ball during the seasons of society when the Pinks and Gels crowded into the ballrooms of country clubs before World War II. This was fantasy and an untruth. My mother was dabbling in fiction long before I tried my hand at that slippery game. Mom was always writing a plot where she was a daughter of wealth and privilege. Her actual South was utterly unbeautiful, but we never knew it, because my mama wrote her own mythology, making it up as she went along. My childhood was storyless except I was being raised by an Irish god of fire and a Georgian goddess of the moon. Their marriage was composed of terror and great violence, storm-tossed and seasoned with all the terrible salts of pain.

Both of my parents were larger-than-life to me. Dad prepared me for the coldheartedness of tyrants, for the spirit of Nero contained in the soul of every man, for the Nazi with his booted foot on the Jew’s throat, for the mass slaughters of the Tutsis by the Hutus, the collective roar of the ayatollahs—for the necessity of understanding the limits of cruelty as well as the certain knowledge that there are no limits at all.

In the myth I’m sharing I know that I was born to be the recording angel of my parents’ dangerous love. Their damaged children are past middle age now, but the residues of their fury still torture each of us. We talk about it every time we get together. Our parents lit us up like brandy in a skillet. They tormented us in their own flawed, wanton love of each other. This is the telling of my parents’ love story—I shall try to write the truth of it the best I can. I’d like to be rid of it forever, because it’s hunted me down like some foul-breathed hyena since childhood.

My childhood taught me everything I needed to know about the dangers of love. Love came in many disguises, masquerades, rigged card tricks, and sleights of hand that could either overwhelm or tame you. It was a country bristling with fishhooks hung at eye level, mantraps,
and poisoned baits. It could hurl toward you at breakneck speed or let you dangle over a web spun by a brown recluse spider. When love announced itself, I learned to duck to avoid the telegraphed backhand or the blown kiss from my mother’s fragrant hand. Havoc took up residence in me at a young age. Violence became a whorl in my DNA. I was the oldest of seven children; five of us would try to kill ourselves before the age of forty. My brother Tom would succeed in a most spectacular fashion. Love came to us veiled in disturbance—we had to learn it the hard way, cutting away the spoilage like bruises on a pear.

It took a world war to arrange my parents’ accidental meeting on Atlanta’s Peachtree Street in 1943. Don Conroy was a hall-of-fame basketball player at St. Ambrose College in Iowa when he heard about the Japanese attack on Pearl Harbor. He left the gym that day, walked down to the recruiting office in Davenport, and joined the Marine Corps. He learned to fly at the Naval Air Station Great Lakes. After practicing a series of aerial acrobatics over Lake Michigan one day, he returned to his squadron and announced, “I was better than the Great Santini today.” It earned him his first and only nickname among these fighter pilots, who would compose his circle of fierce brotherhood. These pilots could kill you and do it fast. The original Great Santini had been a charismatic trapeze artist who performed in a circus act my father had seen as a boy. In his death-defying somersaults, the Great Santini had seemed fearless and all-powerful—with a touch of immortality in his uncanny flair—as he vaulted through the air on a hot Chicago night, always working without a net.

I hated my father long before I knew there was a word for hate. My mother would later claim that I refused to learn the word “Daddy” until after my first birthday. From the start he was a menacing, hovering presence, and I never felt safe for one moment that my father loomed over me. I don’t think it occurred to him that loving his children might be part of his job description. He could have written a manual on the art of waging war against his wife and children. I can’t remember a house I lived in as a child where he did not beat my mother or me or my brothers; nor do I believe that he would’ve noticed if both his daughters had run away from home. My mother raised me, the oldest child, to be
the protector of her other kids, to rush them into secret hiding places we had scouted whenever we moved into a new house. We learned to hide our shame in the madness of our day-to-day lives so that the nuns and priests who ran our parishes everywhere we went considered us an exemplary Catholic family.

Sometimes on the long car trips we spent rotating between Southern air bases, my father would tell the romantic story of his chance encounter with Peggy Peek as she drifted out of Davison’s department store on Peachtree Street. He said, “I was in Atlanta getting some extra training before they shipped me out to the Philippines. I asked a barber where I could hunt up some broads and he told me the best place was down on Peachtree, right in the middle of the city. So I hopped a bus and got off and started walking around, sort of scouting the place out. Then your mother came out of a store in a red dress, carrying some shopping bags. Man, what a package. What a figure. I mean, this was one fine-looking Southern girl. So I followed her across the street. She was walking with two other girls. They were sisters, but I didn’t know that then. I started up a conversation with her. You know. Showed her some suave moves of a Chicago boy. Told her I was a pilot—getting ready to go to war. Back then, it was always a sure pickup line with the broads. But I couldn’t get your mother or her sisters to even talk to me. I mean, talk about three cold fish! But they’d never met a Chicago boy, especially one as charming as me. So I kept going, ratcheting up the pressure, throwing out my best lines. I told Peg I was heading off to war, would probably be dead in a month or two, but was willing to die for my country, and wanted to live long enough to bomb Tokyo. Then I saw a bus coming up to the stop and watched in panic as your mother and her sisters got on. No air-conditioning back then, so all the windows were raised. Jesus Christ, I was starting to panic. Your mother sat by the window. So I started begging, begging, which I’m not ashamed to admit. I begged her for an address, a telephone number, the name of her father, anything. We could go dancing, to a movie, maybe make out a little bit.

“The bus took off and I took off with it, running my ass off, pleading with this broad. I didn’t even know her name and she hadn’t said a
word to me. The bus began to pull away from me and I felt like I had struck out big-time when your mother stuck her pretty head out of the bus window and said, ‘BR3-2638.’ Ain’t it a bee-you-tu-ful story? And we lived happily ever after.”

Claiming His Witch by Ellis Leigh
A Twist of Fate by Joanna Rees
The Silver Sword by Ian Serraillier
End of Days by Eric Walters
Dark Light of Day by Jill Archer
Open Heart by Elie Wiesel
One-Day Crochet: Christmas: Easy Christmas Projects You Can Complete in One Day by Barb Asselin
M.I.N.D. by Elissa Harris
Wild Bells to the Wild Sky by Laurie McBain
Filosofía en el tocador by Marqués de Sade