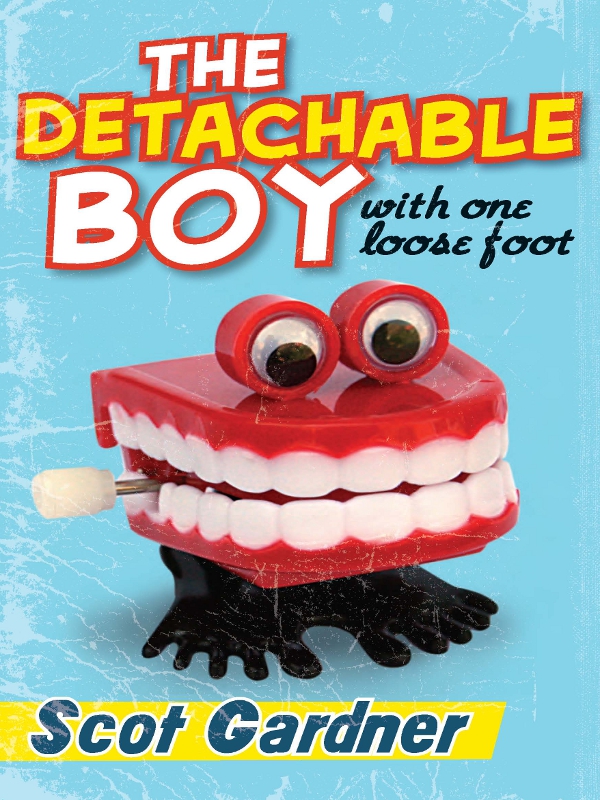 Other books by Scot Gardner

The Legend of Kevin the Plumber

All rights reserved. No part of this book may be reproduced or transmitted in any form or by any means, electronic or mechanical, including photocopying, recording or by any information storage and retrieval system, without prior permission in writing from the publisher. The
Australian Copyright Act 1968
(the Act) allows a maximum of one chapter or ten per cent of this book, whichever is the greater, to be photocopied by any educational institution for its educational purposes provided that the educational institution (or body that administers it) has given a remuneration notice to Copyright Agency Limited (CAL) under the Act.

S
COT
G
ARDNER
fell into writing by accident, starting when he was a full-time home dad, and ending up as a well-known and respected author of young adult fiction.
The Detachable Boy
is his first silly book for younger readers.

Scot’s hobbies include mountain bikes and power kites, kayaking and taking photos of the world around him. He is licensed to handle explosives and venomous snakes and got an 8 out of 10 from Red Symons on
Hey, Hey, It’s Saturday
’s ‘Red Faces’. He lives with his wife and three children, two dogs and some chooks in the bush in eastern Victoria, and spends half the year writing and half the year on the road talking to mostly young people about his books and the craft of writing.

A
CAR HIT ME
, and that’s when things really started falling apart. Literally.

Here’s how it happened. I was walking home from school with my best mates, Ravi and Crystal. Crystal’s the tall, thin one with the gleaming skin. She’s a day older than me and she eats like a hippo. Ravi’s the little Indian boy with the shiniest, whitest teeth on the planet.

‘Okay,’ said Crystal, ‘whose turn is it to piggyback me?’

‘Don’t look at me,’ I said. ‘I’ve got a bad case of Piggybacker’s Knee from the last time I tried to cart you up this hill.’

Crystal put on her sad puppy face. We both looked at Ravi.

He shook his head. ‘Hey, I’m already vertically challenged. The last thing I need is a great lump of Crystal on my back retarding my growth.’

Crystal huffed. ‘Great friends you guys turned out to be. Okay, race you to the lights.’

She hooked her thumbs into her backpack straps and took off like a stampeding giraffe. ‘Yeehaa!’

Ravi rolled his eyes and slapped his thigh. ‘Hi ho, Ravi, away!’ he cried as he galloped to catch her.

I was winding up to dash after them when a black Saab came out of nowhere and thumped into me. Thumped me so hard my legs dropped off, my arms detached and my head bounced across the garden and rolled beneath a camellia bush. 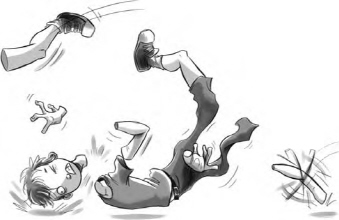 The thing is, I wasn’t dead. Dismembered, yes. Dead, no. I wasn’t dead but I was in grave danger of dying from embarrassment. How could I put myself back together without Ravi and Crystal realising that I was a (let’s face it) weirdo detachable person? The secret my family has kept since I was a little tiny bundle of baby bits in a bassinet.

Quick as thought, I pulled my body back together and strolled out from under the camellia. ‘It’s okay! I’m okay,’ I said, but Ravi and Crystal were way ahead and hadn’t seen a thing. I sighed with relief.

There was a movement behind me.

Two men dressed in shiny black suits had stepped out of the car. They both carried large green bags. They could have been travelling salesmen but their smiles were all wrong. They had the narrow-eyed smirk of bad guys about to do a heist. They were jewel thieves who knew the combo to the safe. They were bank robbers with the loot in sight. 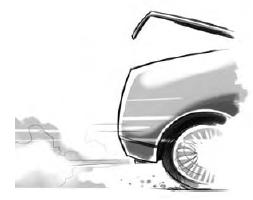 I realised, ten seconds too late, that I was the loot they were after.

The whole world went very dark as a bag was pulled over my head.

A
S IT HAPPENED
, being in a bag wasn’t a new experience. When I was little, Mum used to tuck me into a sleeping bag to stop me from losing bits in the night. It didn’t always work.

‘Did you look under your bed?’

‘Did you look in your cupboard?’

Mind you, my body parts sometimes had help getting lost. Big brother Nick would wait until I was asleep and hide my bits all over the house. I would wake up with my head in the sock drawer, my feet in the shoe rack and my legs wedged in the broom cupboard. At the time it annoyed the orange juice out of me, but now, bundled in the back of a moving car with the two men in suits, I was almost grateful. After twelve years of Nick stashing my parts all around the house, I’d taught myself how to be the world’s number one escape artist.

My hands are smart, like ultra-well-trained miniature poodles. I can send them on missions to collect things or tickle Nick’s feet or tie his shoelaces together under the dinner table, and they can undo knots too. So it was easy to poke my right hand through the little airhole in the top of the green bag and in a few minutes good old Righty had undone the knot and I was free. Well, free of the bag. I was still locked in the boot of the moving car in the stifling dark. Eventually my fingers found a lever and sprang the lid. When the Saab slowed for a corner, I threw myself out, and for the second time that day, found myself scattered over the pavement like roadkill.

I had myself back together in no time and when I looked around there weren’t any witnesses. I was right beside Tinterwill Park, not far from home. Aside from being abducted, ferried in a bag and having to get out while the car was moving, it had been a fun trip. I dusted myself off and started a loose-limbed – not too loose-limbed – jog home.

Mum was putting dinner on the table as I thundered through the front door.

‘Here he is,’ she said. ‘He might be late home but he’s never late for dinner.’ She kissed my forehead. ‘Ooh, you’re all sweaty. What have you been up to?’

Excuses. A few options presented themselves to me.

A – There was a rogue hippopotamus with a taste for schoolbags in Tinterwill Park.

B – I accidentally became a pop star at lunchtime and I had to run home to avoid seething crowds of fans.