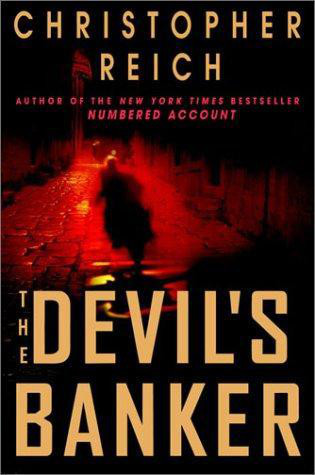 Other Books by Christopher Reich

An Interview with Christopher Reich

To Bill, Helena, and Jackson Reich
With love

It is difficult to walk casually with five hundred thousand dollars taped to your belly. More difficult still when any of the men brushing past you would gladly slit your throat were they to suspect the king’s ransom you carried.

The man who had chosen the warrior’s name Abu Sayeed snaked through the alleys of the Smugglers’ Bazaar, careful to check his impatient step. He was close now, but he could not hurry. To hurry invited attention. And attention meant trouble he could not afford.

Around him, shopkeepers leaned in open doorways, smoking cigarettes and sipping cups of tea. He could sense their eyes upon him as they studied his bearing, gauging its strength, deciding whether he was a predator or prey. Instinctively, he stood straighter and thrust his chin forward. But all the while he kept his pace relaxed, his face slack, even as the claws dug into him.

The money was divided into fifty packets, each containing ten thousand dollars, each wrapped and waterproofed in transparent plastic. The packets had sharp, cruel corners that chafed and cut his flesh. He had been traveling for thirty-six hours. His chest and back were flayed as if scored by a cat-o’-nine tails. Only by thinking of the operation was he able to continue. The prospect of the infidels’ death invigorated him with the strength of the Pharaoh’s army.

At four
P.M.
, the summer sun was at its fiercest. Dust devils arose on the dusty road, swirled lazily, then spun themselves out. After a brief lull, the bazaar was rousing itself to life. Beneath fluorescent lights, shelves sagged with cartons of Dunhill cigarettes, Toshiba laptops, and Paco Rabanne cologne, all brought overland from Afghanistan to avoid duty and tax. Other windows displayed less mundane goods: Kalashnikov rifles, Colt pistols, and Claymore mines. Hashish, heroin, even human chattel could be had at the right address. If there was a free market on earth, mused Sayeed, it was here on the western outskirts of Peshawar, the gateway to the Khyber Pass.

Stopping to purchase a cube of diced sugarcane, he cast his gaze behind him. His depthless black eyes scoured the street, checking for the misplaced face, the averted gaze, the anxious dawdler. So close, he must keep his senses keen. He did not believe that the crusaders knew his identity. Still, he must be cautious. Members of the American Special Forces infested Peshawar as lice infest a beast. Most were easy to spot, with their Oakley sunglasses, Casio watches, and desert boots. A few even dared enter the bazaar, where foreigners were not welcome and Pakistani law held no sway.

The thought of the Americans brought a contemptuous smile to his lips. Soon they would learn that they could not run. The fire was coming. It would burn them in their heartland. It would scald them from within.

And for a moment, the claws loosened their grip. The pain subsided, and he basked in the glow of destruction.

Satisfied his trail was clean, Sayeed spat out the sinewy cane and crossed the narrow road. To look at, he was no different from any of the thousands of souls who eked out an existence trafficking the porous border that separated Pakistan from Afghanistan. His
shalwar kameez,
the baggy shirt and trousers that made up the local dress, was filthy and stiff with dried sweat; his black headdress smothered with red alkali dust. His beard belonged to the most fervent of believers, as did the AK-47 he carried slung over a shoulder and the bejeweled dagger strapped to his calf.

But Sayeed was not Pakistani, nor was he a Pashtun from the southern provinces of Afghanistan, or an Uzbek from the north. Born Michael Christian Montgomery in London, England, Sayeed was the bastard offspring of a cancerous British officer and a teenage Egyptian whore. His father had died while he was a boy, leaving him a polished accent and not much more. Unable to care for him, his mother returned to Cairo and gave him over to the
madrasas,
the religious schools that gifted him with an Islamic education. His childhood was brutish and short. It was a natural progression to the camps where he learned the creed of the gun, memorized the verse of violence, and worshiped at the altar of rebellion. And from there to the killing fields of Palestine, Chechnya, and Serbia.

At twenty, the Sheikh found him.

At twenty-one, Michael Christian Montgomery ceased to exist. It was Abu Mohammed Sayeed who swore the oath, accepted the mark, and joined Hijira.

Skirting a convoy of carts piled high with Korean fabrics, Tibetan rugs, and Panasonic televisions still in their factory packaging, he reached the Tikram Mosque. The doors were open, and inside the shadowy hall, a few men lay on prayer rugs, prostrate in worship. His eyes returned to the street. Scanning the intersection ahead, he felt a new pain lash his back. This time, however, it was not the jagged belt that provoked his discomfort. It was fear. He could not see the store. Somehow, he had taken a wrong turn. He was lost.

Frantically, Sayeed turned his head this way and that. It could not be. He was at the Tikram Mosque. He had seen the photographs. He had studied the maps. Despair washed over him. Others were waiting. The countdown had begun. Seven days. The thought of failure turned his bowels to water.

Terrified, he wandered into the street. A horn blared in his ear, loud, very loud, but from another universe altogether. Sayeed jumped back a step and a jitney lumbered past, passengers hanging from the doors, clinging to the luggage rack. In its wake, a cloud of rank exhaust choked the already oppressive air. He could not go on. He could not go back. Truly, he was damned.

The exhaust dissipated and he saw it. The gold letters emblazoned on a black field. “Bhatia’s Gold and Precious Jewelry.” His despair vanished. In its place came joy. The light of a thousand suns.

“
Insh’allah,
God is great,” he whispered, a bolt of piety swelling his heart.

Guards stood on either side of the doorway, Kalashnikovs to their chests, fingers tickling the trigger guard. Sayeed passed them without a glance. They were not there to protect jewelry, but cash, primarily U.S. dollars, and gold ingots. Bhatia’s reputation as a jeweler might be suspect, but his trustworthiness as a
hawaladar,
or money broker, was unquestioned. Faisan Bhatia had long served the local smuggling community as its agent of choice. He was the only broker in the region able to handle the large sums that Abu Sayeed required.

In Arabic,
hawala
means “to change.” And in Hindi, “trust.” Put simply, it was the
hawala
broker’s job to effect transfers of cash from one city to another. Some of his clients were traders eager to repatriate their earnings after selling their haul in the bazaar. Others, simple folk wishing to send money home to loved ones in Karachi, Delhi, or Dubai. Both groups shared a distrust of the bureaucracy and paperwork demanded by the country’s less-than-solvent banks. For them,
hawala
was a welcome alternative. A system built on trust, hidden from intrusive eyes. A system that had been in place when Arab traders plied the Silk Road hundreds of years ago.

Bhatia, a fat Indian with a streak of gray in his hair, stood imperiously behind the counter. As Sayeed approached, he eyed the customer’s caked clothing and unwashed face with undisguised contempt.

“I would like to make a transfer,” Abu Sayeed whispered when he was close enough to taste the man’s breath. “It is a matter of some urgency.”

The Indian did not move.

“The Sheikh sent me.”

Faisan Bhatia’s eyes flickered, but only for an instant. “Come this way.”

It was the most god-awful frightening place she had ever been. Some parts of Jakarta came close. Jakarta with its garish slums, oppressive pollution, and packs of teenage muggers giggling with hostile intent. Macao had a few dark corners where you didn’t dare venture. And everyone knew about Rio, the gorgeous bad boys on motorbikes, streaking past with their razors at the ready. But here—the unremitting heat, the hostile stares, and worst of all, the
burqa
draped over her head and shoulders, baking her like a Christmas goose—this topped it all.

Her name was Sarah Churchill, operational designation: “Emerald,” and through her black gauze veil, she watched the target advance across the intersection. She could see that he was in distress, trying not to limp, compensating by standing too straight and puffing out his chest. Two days she’d been tracking him, up and down the mountain passes, a distance of sixty miles. She was hurting, too, but she’d be damned if she’d show it. Her feet were raw and blistered in their leather sandals; her legs fatigued beyond measure. A little while ago, her lower lip had cracked and she could feel a trickle of blood, salty and strangely reassuring, on her tongue.

A trio of Indian women clad in red and orange saris scurried across her path, and she mimicked their gait. The “second-class shuffle,” she called it—head bent, shoulders hunched, eyes fixed to the ground like a dog that’s been beaten too much.

Drawing in her shoulders, Sarah made herself shrink beneath the full-length garment. Her horizons seemed to dwindle before her and she bridled at her training.
Blend in with your environment:
the first rule of tradecraft taught at Fort Monckton, where all good little English boys and girls go to learn to be spies. Ever the prize pupil, she kept her back hunched and continued to hug the inside of the street.

She was too tall. That was the problem. You didn’t see many Pakistani women who stood five feet nine inches in bare-stockinged feet. Her height came from her father, a six-foot-four-inch Welshman. Her hair, a raven’s black and cut to her shoulders, was her mother’s gift, as were her sierra brown eyes. Her attitude, though, was all her own, and not subject to amendment or revision. She was determined, outspoken, and possessed a dangerous temper she could not quite control. Five years ago at IONEC, the Intelligence Officer’s New Entrant’s Course, she’d set the women’s mark for the fifty-mile hike, but when at her graduation ceremony her instructors called her their toughest recruit, she’d broken down and cried like a baby.

“He’s gone into the store,” she whispered. “Bhatia’s Gold and Precious Jewelry.” She spelled the name slowly, enunciating each letter just as the matron had taught her at Roedean. “It’s the bloody
hawala,
all right. Time to call in the reinforcements.”

“Coming up.” She found the global positioning device on her belt and hit the locate/transmit button. Within a second, the stationary satellites that comprised the Central Intelligence Agency’s proprietary GPS had established her exact latitude and longitude to within six inches of where she actually stood, and her altitude above sea level to within four. She’d been transmitting her location every hundred meters since she’d entered the bazaar. Taken together, the coordinates constituted a route marker for the cavalry, or in more dire circumstances, a path to get her the hell out of Dodge.