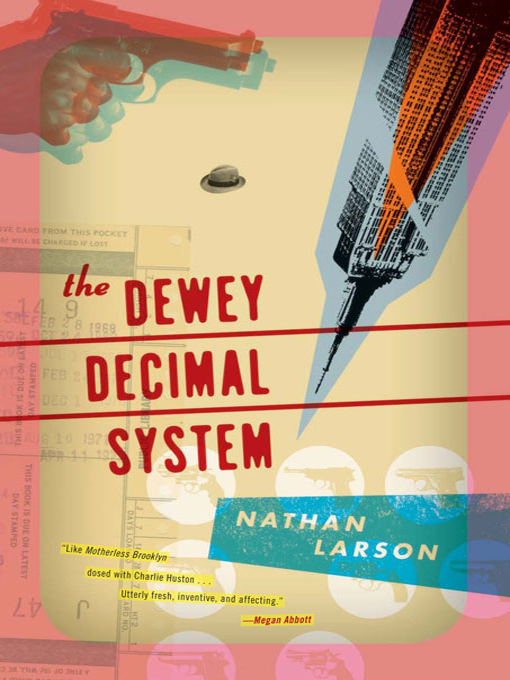 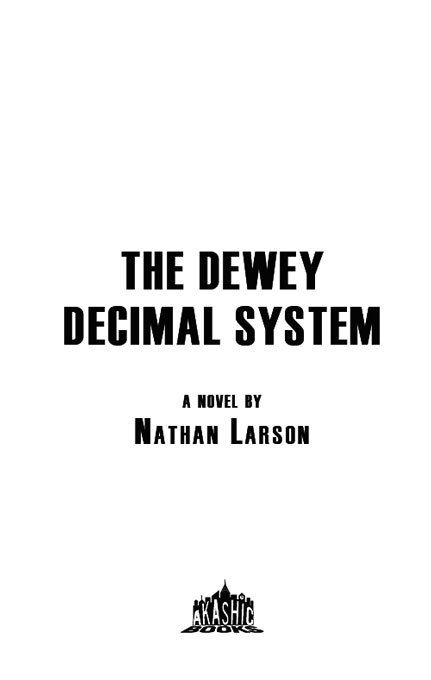 This is a work of fiction. All names, characters, places, and incidents are the product of the author’s imagination. Any resemblance to real events or persons, living or dead, is entirely coincidental.

To my wife and son

A
nd I wake, gasping and flailing at the hooded shapes that recede swiftly with my sleep, the report of the gunshot ricocheting off my skull and out into the great hall of the Reading Room.

As the sound fades and the hush returns by degrees to that massive chamber, my heart rate slows and indeed I know exactly where I am: the Main Branch of the New York Public Library at the juncture of 42nd Street and Fifth Avenue, in the City of New York.

I can’t relate in exact detail what led me here, but this much I can tell you: I am a man of mixed ethnicity, from the borough of the Bronx. I freelance from time to time for the government of the City of New York. Or at least what’s left of it.

I am, or was, a soldier, in a landscape without features, save for the funnels of sand the wind might kick up, and the occasional cluster of low buildings. In this antispace there were long periods of time where nothing whatsoever occurred, and we were very hot. When shit did happen, it did so very fast, in a flourish of blood and bits of metal and fiberglass. Even so, it all seemed so very half-assed. Hard to take seriously.

Like a bad movie you didn’t really want to watch, but settled on for lack of options.

And, you know, I was a husband and a father. I think. But that was before.

I sit up, rifle through my suit jacket for a cigarette, and find none. Despite the relative quiet, I’m not alone here … a mother and son have an old hot plate going nearby, staring intently into the pot, mother holding a potato aloft, presumably waiting for the water to boil.

I’m surprised they found a working outlet. Take stock of its location should I need to charge my shaver. This might be one of the last public buildings that draws off of the city’s skeletal power grid.

Have a job here at the library. I’m taking care of the books. But more about that later.

Beyond the Madonna and child, other human forms are scattered here and there, adrift and irrelevant.

Irrelevant, that sounds cold. But for as much as the city has been transformed, there’s one thing that’s truer than it ever was in this town, and that’s this: if you don’t have a direct line, a Batphone, you not going to make it.

I, people, have a direct line.

Speaking of which, my pager hums. It’s the DA. Check the code: tells me I need to get down to the office pronto.

Hop up, fasten my belt. Spritz on a little Purell
TM
and wring my hands. Purell
TM
is a must-have go-to kind of thing for me, a cool breeze in a hot world of crazy.

I sleep in my suit: fuck it. Saves time. Step into my wing tips, roll up my bedding, shove it all into my armyissue bag, and stow it on a low shelf with my jerky, stash of pistachios, and bottled water.

Dry swallowing my wake-up pill, I’m down the worn marble stairs and out into the piss-warm drizzle; I slap on my hat and tap the northernmost lion’s stone haunch as I pass by.

This is part of my System. Left on Fifth Avenue. All important, to follow the System. And use Purell
TM
, especially after you’ve touched a public edifice.

Rain mutes the pervading odor of burning plastic and garbage. Midsummer, indeed the first summer after the events of February 14.

The smell loiters even now, reliable as death; that’s the plastic. The trash odor stems from the waste holes in what was once Bryant Park.

In accordance with the System I take the left on 42nd Street. Prior to 11 a.m. I will only execute left turns. Headed to the B train.

Show my laminate to the female Marine, she bids me proceed, and I descend.

Improbably, the subway soldiers on, thanks to federal funds earmarked for the “Great Reconstruction.” Exactly who is responsible for allocating the cash within the city is unknown to me, but I can tell you it ain’t done with the public good in mind. First priority would be lining the pockets of many a shady character downtown, as well as the various construction warlords who swarmed the island post–2/14.

That’s the real, and no effort is made whatsoever to disguise this fact.

Subway service (now fully automated) is strictly reserved for city employees, dignitaries, and those who are liquid enough to lay a healthy donation across the right sweaty palm. Trust me, such folks are few and far between. Plus, if you can hang with such heavy bribery, why the fuck would you be taking the freaking subway? Chances are you’ve already headed inland and are holed up behind gates at a compound upstate, or in central Jersey. Away from the water, away from possible future “occurrences.” God bless.

Some of us need to work. Some of us have a System.

Just me on the platform. The water looks to be about ankle deep on the tracks, rats paddle by in schools. The very sight of them makes me reach for that Purell
TM
again.

A D train, then an F, piloted by some distant computer. I board the B when it pulls in.

The System protects me, keeps my thoughts structured. There are rules, sure: When riding the New York City subway, it’s essential to begin with letter trains (A, B, C), and then only in alphabetic order. If traveling more than four stops, it’s essential to transfer to a number train (1, 2, 3), and in a perfect world the first transfer should be an even number.

It’s no disaster if that’s not a possibility, I’m just saying: the more you work the System, the more the System works for you. For this reason I switch to the 6 train at Broadway/Lafayette.

I share a car with a group of Transit Authority cops. Uniforms mismatched. The biggest one gives me the once-over, clocks the laminate, nods in my direction.

I touch the brim of my hat. It’s an effort to keep my face composed. Funny, no? After everything I’ve been subjected to, to the limited extent I can remember particulars, I’m jumpy around cops.

I take my pulse and count backward from ten, employing the System. Exiting at Canal, I exhale, feeling the cops’ eyes on the back of my neck.

I’m thinking I need to double up, so I pop another pill and emerge into the hot haze, the dank barnyard of Chinatown.

I might be fluent in Cantonese but that doesn’t mean I want to stop and have a conversation.

I finger the single key in my front pocket.

And, needless to say, I whip out the Purell
TM
.

Using a System-based technique I block out the human static and meditate on today’s possible activities.

In the military we called such types (though they were rare) “canaries” (see “canary in a coal mine,” see also “cannon fodder”). Best uses of such a person include minesweeping, drawing sniper fire away from more useful personnel, and disposal of unexploded ordinance.

Not that I care but I think Rosenblatt was a once a staff lawyer at one of those 1-800-VICTIM2 outfits. Ambulancechasing type stuff. In the post-Valentine’s chaos, there was a lot of general upheaval, shuffling, many power grabs. And Rosenblatt somehow planted his ass here.

Despite appearances, we all know it’s exactly this type of man who can be the most dangerous, given a corner office. An office like this one, here on the nineteenth floor at 100 Centre Street. Art deco appointments. Southwest facing; out the sooty windows one has a decent view of the recently reinstated Freedom Tower construction site. The blighted remains of the Brooklyn Bridge are just visible behind City Hall, awaiting the healing balm of the Great Reconstruction.

It’s quite a view.

I return my attention to the little man behind the big desk.

“What. I’m boring you. This relationship. The spark is gone. Magic has died. What.”

Rosenblatt speaks too fast, staccato, it’s jarring. I close my hand over the bottle of pills in my pocket, and clear my throat.

“Pardon, sir. You were briefing me vis-à-vis the Ukrainians.”

“Yeah, so, what. Fucking animals. Eat their young. My point: they get reorganized, that’s the kibosh on a fair percent of current and future construction projects. Cost prohibitive. We go back to this Local 79 mess, they’ll be expecting health care and thirty-hour work weeks and fuck knows what else on a velvet pillow. Decimal. Have a pistachio. Vibing Dachau over there. Creepier than usual, which is saying a mouthful.”

He extends a small ceramic bowl with Hebrew lettering, filled with nuts. I demur. Microbes, human feces, double dippers. Like that fucking bowl of seeds in Indian restaurants.

I get out the Purell
TM
, give a squirt, rub my hands, shaking my head. “Allergic.”

I smile. I want to take a pill but it’s been, tops, twenty minutes. Say, “Pistachios and walnuts. Now you know, Mr. Rosenblatt. So what are we getting at, give somebody a visit in the usual manner?”