Read The Duke and The Governess Online

The Duke and The Governess 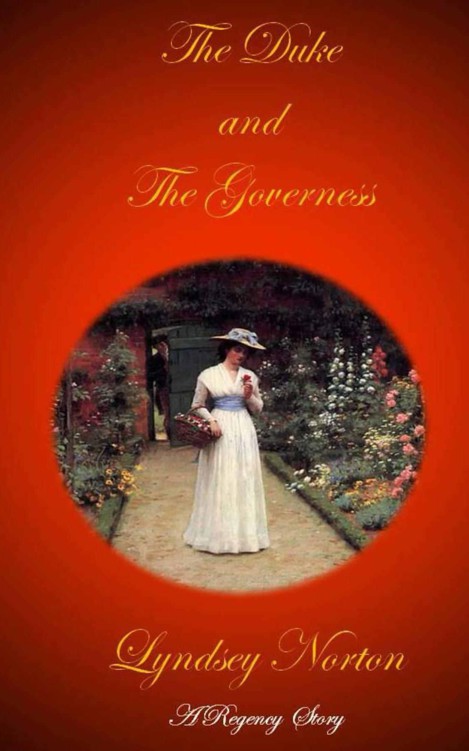 The right of Lyndsey Norton to be identified as the

Author of this work has been asserted by her in accordance

with the Copyright, Designs and Patents Act 1988.

All the characters in this publication are fictitious

and any resemblance to real persons, living or dead,

The Gordon family sat in the front pew of the church and listened to the vicar drone out his usual Sunday sermon. Jessica was the youngest and she was surrounded by her remaining family. Her brothers and unmarried sisters were all crammed in the pew beside their parents, Lady Helen Gordon and her husband Wilbur.

Lady Helen had been pursued by the young and dashing Wilbur Gordon, much to her father, the Earl of Westmoreland’s disgust. Gordon was rich, to be sure, but Westmoreland wanted a titled husband for his only daughter. Much to his disgust, Lady Helen couldn’t keep her skirts around her ankles, and the Earl was annoyed to have to marry her to Wilbur because she’d been compromised for marriage to anybody else. As soon as the ink on the certificate was dry, Wilbur and Lady Helen set up house in the large mansion next to his warehouse in Gracechurch Street, in the City. It didn’t take long for Helen to produce her first child and no matter how much she claimed it was premature, Richard was born seven months after the wedding. He was soon followed by his numerous siblings when Lady Helen decided enough was enough, after her difficult confinement with Jessica. She had produced two boys and five girls.

From the earliest age, Jessica was aware of different standards between the siblings. Of course, the boys could do whatever they liked almost without censure, but the girls were watched like hawks. They had to be proper ladies at all times. Lady Helen employed a nanny and a governess for her children and Jessica spent more time with those two women than she ever did with her mother. By the time she was seven she could read and write in both Latin and Greek, she could converse in French as if she was born in Paris and her German was understandable. Jessica spent most of her time with Cecily, her nearest sibling in age, at only a year older Cecily had turned into a veritable bluestocking, especially after
the boys left for Harrow. The f
ive sisters were very close, until suddenly Beatrice had her first season and attended her first ball. She became besotted with a young Captain who had excelled on the battlefield in the Colonies and been Knighted by the King for his valour. In his generosity the King had bestowed a substantial living to the Knighthood and Beatrice was swept off her feet and straight into the marriage bed, producing her first child eight months after the marriage.

‘Won’t one of us actually be a virgin on our wedding night?’ Lady Helen muttered to her husband.

‘Jessica won’t let us down.’ Wilbur Gordon said faithfully, eyeing his second eldest daughter with a liverish expression. Jessica preened at the praise, even though she was too young to understand. Emily squirmed and turned to her current flock of admirers, but it was too late. Her virginity was already squandered and she already had a loose reputation, forcing Wilb
ur and Lady Helen to marry her off to a penniless Baron
.

Robert was still at Harrow as Richard transferred to Cambridge and Abigail was not quite ready for a season. There was less than five years between the last three girls, Abigail, Cecily and Jessica. The three were hardly ever out of each others company and as Lady Helen strove to marry her eldest daughters off, a distance appeared giving the girls more freedom. Suddenly they were making friends with the workmen in the warehouse, running around the park at Tower Hill like harridans.
After Emily was married
, Lady Helen suddenly saw what harridans her girls had been allowed to become and promptly sacked the governess and the nanny. She took the girls under her own wing to finish them for their coming out. They were subjected to vigorous deportm
ent training with the aid of a
stack of heavy books. Lady Helen was determined that one of her daughters should attract a title and there was only one way. Her way. They were reprimanded if they slipped back into their slovenly ways and all three girls were walloped with Lady Helen’s slipper more than once.

But it was beneficial
, as Jessica discovered
at her first ball
,
when the newly coroneted Duke of Warwick asked her to dance.

John Farrington was born in Shropshire to a wealthy farming family. At five he showed remarkable intelligence and his father insisted on a tutor. By the time he was ten, John could argue fluently in Latin and add a sheet of calculus faster than his tutor. He excelled in the saddle, hunting and racing with his friends, his shooting was the best in the county and his fencing was so good, his tutor resigned with an apology because there was nothing for John to learn, except patience. His father didn’t insist on sending him to Eton or Oxford, because he didn’t believe he would need to go, instead he encouraged John into business. John became very talented at judging money making ventures and soon the guineas were rolling into his bank accounts. His name was bantered about in the City as an astute business man, even though he was still only a teenager.
His first sexual encounter took place in a coach owned by the “Lady” concerned and he discovered that he not only had a taste for sex, but an unrivalled touch that made women beg for him.
By the time he was in his early twenties, John had acquired the reputation of a rake, with a constant supply of nubile women trotting through his life
, most of whom were either married or professionals
. He started down the path to oblivion and his father was not happy.

In disgust at his only son’s behaviour, he dragged an unsuspecting John to Warwickshire. At the gates of Charlecote Hall, his father told him about his possible inheritance and frog marched him to the chambers of the Duke of Warwick, so that he could see first hand where his dissolute life would end up. John was sickened by the condition of the uncle he’d never seen. Dying a little each day as the lesions from the pox ate his body away at the same rate as it destroyed his mind.

‘Why didn’t you tell me I was in line for a Dukedom?’ he demanded harshly, his father studying his pale face in the carriage on their way home.

‘Because I didn’t want you to turn out like him!’ he said coldly and John recalled the smell of decay. ‘
It is very difficult to say no when you’re in line for one of the highest titles in the land.  Women will throw themselves at you for your title and money and
I didn’t want you to be tempted to follow in his debauched footsteps,’ his father said with a sigh, ‘and you did anyway.’ He looked firmly at his son. ‘Clean up your life or you’ll end up like that! Driven mad by the pox!’

Of course John’s father, Reginald Farrington, couldn’t foresee that he would die of a heart seizure before his brother died of the pox, but he did and John was bestowed with the title at the tender age of twenty five.

He spent the first year of his tenure clearing up the estates, redecorating Charlecote Hall and making sure all traces of the pox were eradicated from the household. All mattresses were burned along with all the linen and new items were bought. John remained in his own house, in Cheapside, until the London Residence in Grosvenor Square was ready and then he brought his mother and sister to join him in London.

John didn’t exactly listen to his father; he just became more particular about where he sowed his wild oats and made a point of avoiding whores and light skirts. But he soon had himself a new mistress, which he housed in Cheapside.
She
was a practiced courtesan and he would see her regularly until that fateful night he went to the Duke of Norfolk’s first ball.

Miss Jessica Gordon sat in the front pew of the church and listened to the vicar drone out his usual Sunday sermon. It was full of hell and damnation for the unsuspecting debauchers and evil doers in the land of the living. She was dressed demurely in a gown of soft yellow muslin covered by a very chaste Spencer in dark chocolate brown superfine wool. On her hands, as they lay folded in her lap, was a pair of the finest kid gloves, tied with ribbon to match the bonnet that sat perkily on her head
, almost covering her dark sable hair
and the reticule that
matched the Spenser
was suspended from her right wrist
. Her
cornflower
blue
eyes never left the pulpit,
although her mind was
agreeably
engaged elsewhere and her expression remained cal
m and aloof
. A faint blush appeared on her cheeks, but anyone observing her rapt expression would assume she found the vicar’s sermon enthralling.
She didn’t. She was remembering the previous night.

The Duke of Norfolk had thrown open the doors of his London Mansion and finally held his first ball. His new wife had managed to talk him around at last
, although Norfolk absconded to White’s for the duration
. The
haute ton
had been appalled that Norfolk hadn’t held any kind of festivity to celebrate his nuptials to his new young wife until now; almost a year since the marriage and their first child was safely in the nursery. The Duchess had produced the ducal heir exactly nine months to the day from the wedding.

The ball had been a thundering success and was a veritable crush as the whole of the
beau monde
descended on Mayfair
, including Miss Gordon’s entire family. Her mother was the daughter of an Earl, so invitations to these
kinds
of functions happened every season. Her father was in trade, which always caused consternation, like a cat amongst the pigeons her father would hold court with the more business minded gentlemen and discussions would be about land management, animal husbandry, the price of wool and the state of merchant shipping. Only the truly snobbish Ladies would disparage Jessica for her father’s business acumen, but he was very plump in the pocket and more of the discerning misses would v
ie for her brother’s attention. Jessica considered her siblings. H
er brother Richard, who at almost twenty eigh
t, was seriously staring down the throat of marriage
, whether he wanted it or not as t
heir father was becoming most insistent.
Beatrice
was already married and happily producing a child a year. She had just left the child bed after her fourth offspring had emerged into the world. Then
there was Emily,
married to a Baron and expecting her second child
. Robert
was already breaking every heart in London since
he’d left Cambridge.
Abigail at twenty two years was
enduring her fourth season in London, she’d al
most reached the point where she expected to be a confirmed spinster
, but her Mother wouldn’t allow it and had forced her to return to London. Cecily was only twenty, but behaved as if this was her first season and she was a giggly frightened
little girl, making Jessica at e
ighteen
,
feel almost an adult and severely mature
.

They had sat demurely in their finery, complete with silk gloves
, ostrich feather fans and
silk gowns, waiting for somebody to notice that they were there. Jessica felt like a wall flower.