Read The Elixir of Death Online

The Elixir of Death 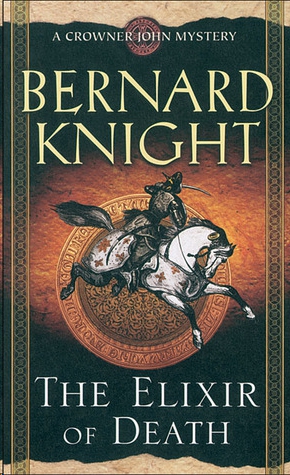 Professor Bernard Knight, CBE, became a Home Office pathologist in 1965 and was appointed Professor of Forensic Pathology, University of Wales College of Medicine, in 1980. During his forty-year career with the Home Office, he performed over 25,000 autopsies and was involved in many high profile cases.

Bernard Knight is the author of twenty novels, a biography and numerous popular and academic nonfiction books. The Elixir of Death is the tenth novel in the Crowner John series.

Fear in the Forest

The Elixir of Death

This edition published by Pocket Books, 2006

An imprint of Simon & Schuster UK Ltd A Viacom company

The right of Bernard Knight to be identified as author of this work has been asserted in accordance with sections 77 and 78 of the Copyright! Designs and Patents Act, 1988.

This book is a work of fiction. Names, characters, places and incidents are either a product of the author's imagination or are used fictitiously. Any resemblance to actual people living or dead, events or locales is entirely coincidental.

Typeset in Baskerville by M Rules

Printed and bound in Great Britain

In the twelfth century, little distinction was made in the West between the various peoples in the Levant and Middle East, so names such as 'Saracens, Turks, Moors, Arabs, Mohammedans and Mussulmen (from Mosul)' were all randomly applied to them. Even the great Saladin, leader of the Saracens and major adversary of Richard the Lionheart, was actually a Kurd.

A further historical note about the fanatical Nizari branch of the Isma'ili sect is given at the end of the book, indicating that the present-day strife between Shi'a and Sunni Muslims has been going on for well over a thousand years.

Palestine, the Roman name for 'The Holy Land', was then part of a collection of Christian kingdoms, which extended up into Asia Minor, mostly ruled over by French noblemen. This Christian land was often known as Outremer, meaning 'beyond the sea'.

In spite of the long voyages involved, piracy and coastal raiding were common around the southern and western coasts of Britain long after the well-known Viking period, carried out by marauders from as far away as Spain, North Africa and even the eastern Mediterranean.

Alchemy was a mystical and secretive precursor of chemical science, but with a deep philosophical content. Its origins go back to ancient China, where a 'Pill of Immortality' was claimed to have been developed about 300 BC. After the collapse of Romano-Greek culture, alchemy was rescued, like other disciplines such as medicine and astronomy, by Arabic philosophers such as Geber, until it came back into Western consciousness in the Middle Ages. Here its main objectives were the search for the 'Philosopher's Stone', which could transmute base metals into gold, and the related 'Elixir of Life', which, like the Chinese pill, could heal sickness and prolong life.

One of the problems of writing a long series such as 'Crowner John' is that regular readers will have become familiar with the background to the stories and may become impatient with repeated explanations in each book. Those coming new to the tales, however, still need to be 'brought up to speed' to fully appreciate some of the historical aspects, so in this tenth episode, to avoid slowing down the action in the text, the Glossary has been expanded and a note offered here on the functions of the coroner, one of the oldest legal officers in England.

Though there are a couple of mentions of a coroner in late Saxon times - and he may have existed in preConquest Normandy - the office of coroner really began in September 1194, when the Royal Justices at their session in Rochester, Kent, proclaimed in a single sentence, the launch of a system which has lasted 812 years - so far! They said, 'In every county of the King's realm shall be elected three knights and one clerk, to keep the pleas of the Crown.'

The reasons for the establishment of coroners were mainly financial, aimed at sweeping as much money as possible into the royal treasury. King Richard the Lionheart was a spendthrift, using huge sums to finance his expedition to the Third Crusade and for his wars against the French. When he was kidnapped on his way home from the Holy Land, he spent well over a year imprisoned in Austria and Germany and a huge ransom was needed to free him. To raise this money, his Chief Justiciar, Hubert Waiter, who was also Archbishop of Canterbury, introduced all sorts of measures to extort money from the population of England - indeed, the first taxation on property began then.

Hubert revived the office of coroner, which was intended to collect money by a variety of means relating to the administration of the law. One of these was by investigating all deaths which were not obviously natural, as well as serious assaults, rapes, house fires, discoveries of buried treasure, wrecks of the sea, and catches of the 'royal fish' (whale and sturgeon). Coroners also took confessions from criminals and fugitives seeking sanctuary in churches, recorded the statements of 'approvers' who wished to turn King's evidence, attended executions to seize the goods of felons and organised the ritual of Ordeals and trial by battle.

As the Normans had inherited a multiple system of county and manorial courts from the Saxons, the coroner also tried to sweep more lucrative business into the new royal courts, which gave him the title of 'Keeper of the Pleas of the Crown', from the original Latin of which (custos placitorum coronas) the word 'coroner' is derived. Although he was not allowed to try cases, he had to record all legal events to present to the Royal Justices when they came on their infrequent visits to the 'assize' towns. The actual recording was done by his clerk, as the vast majority of people were illiterate, including the coroners themselves. Reading and writing were almost wholly confined to those in holy orders, of which there were many grades, apart from actual priests.

It was hard to find knights to take on the job, as it was unpaid and the appointee had to have a large private income, at least twenty pounds a year. This was supposed to make him immune from corruption, which was common among the county sheriffs. Indeed, another reason for introducing coroners was to keep a check on the sheriffs, who were the King's representative in each county. They were notorious for their dishonesty and embezzlement - in 1170, the Lionheart's father, Henry 11, had sacked all the sheriffs and heavily fined many for malpractice. The sheriff in the earlier books, Richard de Revelle, was actually the sheriff of Devon in 1194-95. He was appointed early in 1194, then lost office for reasons unknown, and came back later in the year, but was fired again the following year. As is the case with his successor, Henry de Furnellis, many of the characters in the books actually existed, especially the churchmen of Exeter. The names of the Devon coroners are not recorded until early in the thirteenth century.

Attempting to use 'olde worlde' dialogue in historical novels of this era is quite futile and unrealistic, as in Devonshire at the time of this story most of the common people would have used Early Middle English, of Germanic origin, totally incomprehensible to us today. Some would still have spoken a Celtic language, similar to Cornish, Breton and Welsh - and the ruling classes would have spoken Norman French. The language of the clergy would have been Latin in which all documents would also have been written.

The only money in circulation, apart from a few Byzantian gold coins, would have been the silver penny. The 'shilling', the 'mark' and the 'pound' were nominal accounting values, not actual currency.

The daily wage of a manual worker would have been one or two pence, more for skilled craftsmen. Pennies were cut into halves and quarters for the purchase of small goods.

Sanctuary seekers (q.v.) could leave England if they confessed their guilt to a coroner and then walked in sackcloth, carrying a wooden cross, to a port nominated by the coroner. If no ship was readily available, the abjurer had to wade up to his knees in every tide, to show his willingness to leave the realm, never to return.

Officials of the royal forests who regulated 'agisting', the admission for a fee of animals, especially pigs, to feed on the fallen nuts and acorns.

The almost universal, weakly alcoholic drink of the lower classes, along with cider, as most water was contaminated. The name comes from the 'ale', a village festival where much was drunk. The words 'wassail' and even 'bridal' (bride-ale) are derived from these celebrations.

A piece of alchemic apparatus used for distillation, usually a flask with a long spout.

A fine imposed by a law officer, including the coroner, for the innumerable ways in which a person could fall foul of the complex legal system. The coroner did not collect the fine, but his clerk recorded it for the courts, which decided upon payment.