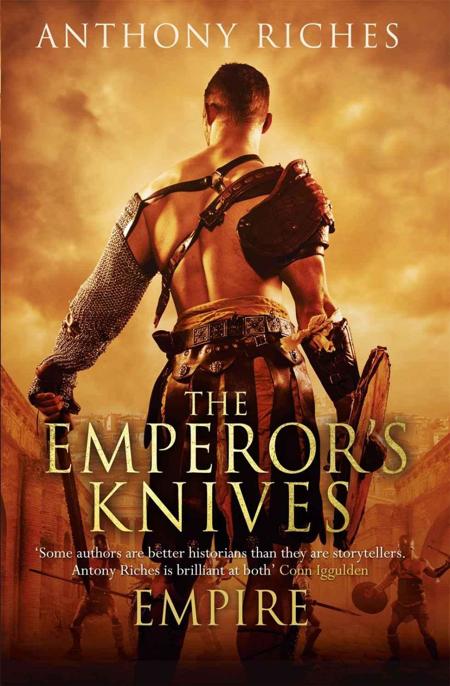 By the same author in the Empire series

By the same author in the EMPIRE series

Anthony Riches holds a degree in Military Studies from Manchester University. He began writing the story that would become the first novel in the Empire series,
Wounds of Honour
, after visiting Housesteads Roman fort in 1996. He lives in Hertfordshire with wife and three children.

Find out more about his books at
www.anthonyriches.com
.

The right of Anthony Riches to be identified as the Author of the Work has been asserted by him in accordance with the Copyright, Designs and Patents Act 1988.

For Jennifer and David

When I first began to contemplate actually writing the story that has become
The Emperor’s Knives
– as opposed to the previous musing on how fascinating it would be to get Marcus back on his home turf and turn him lose to seek bloody revenge – it quickly became very clear to me that I had a major disadvantage in any attempt to set a novel on the streets of Rome. I had no real knowledge of the streets of Rome. I knew the Forum, the Colosseum and the Palatine, at least as much as is possible from their remains, and I still get goosebumps from my memory of first touching the stone on which Julius Caesar was cremated, but the ancient city beyond that tiny portion was a mystery to me. Finding the internet less helpful than is usually the case, I was fortunate to enjoy one of those serendipitous moments of discovery that we tend to put down to luck, and perhaps ought to credit to the power of a focused mind instead. Seeing a review of
Dans La Rome Des Cesars
(translation:
In The Rome Of The Caesars
) I made a swift purchase, waited impatiently for its arrival, then settled down to pore over the most amazing book on the city I’ve ever read. I can’t understand much of its text, being far from fluent in written French (there is no translation), but I can assure you that the pictures and maps are enough to make up for that lack of fluency.

Gilles Chaillet has written a labour of love, a gorgeously illustrated map book of the fourth-century city apparently based on the plaster model built by his countryman Paul Bigot – Le Plan De Rome – which now resides in the University of Caen. The French Amazon blurb calls the author ‘Stakhanovite’ (a 1930’s Soviet Russian term for overachievement), and I can see their point, given the 5,000 hours of work that went into writing it (and the 3,000 hours of artwork by his collaborators Chantal Defachelle and Isabelle Brune). Trust me, if you have one iota of interest in the eternal city, you owe it to yourself to purchase this magnificent book. And if you can read French, so much the better!

With Rome’s street map at my fingertips, the second subject I needed to understand better was the brutal, ignoble, but occasionally dazzling spectacle of gladiatorial combat that was a staple of Roman entertainment for a good five hundred years. While it would be fair to say that I have consulted at least a dozen works on the subject, from the mildly sensationalist to the deeply academic, the book that I found to be of the most value was Philip Matyszak’s marvellous
Gladiator – The Roman Fighter’s Unofficial Manual
. As with his other short, pithy but detailed packed works, Philip has excelled in bringing crisp understanding to a sprawling subject, a book both learned and yet wearing its erudition lightly enough for the reader who just wants to be informed. If there’s a fact worth knowing about the arena’s bloody trade, some of it amusing, some of it truly horrifying, then it’s in this book. I cannot recommend it highly enough. As usual, should you find any factual errors you can rest assured that they are all my own work. Oh, and there’s a signed first edition waiting for the diligent reader who can find the quip I’ve reproduced from Maty’s book in connection with entry to the gladiatorial life – but only one. The first person to contact me on Facebook gets the prize if they have the right answer.

With those two recommendations made, it only remains for me to say my thank you’s. To my wife Helen, my agent Robin, and to my editor Carolyn and her assistant Francine go my gratitude for your continued support, tolerance and gentle chivvying. To my beta readers, David, John and Viv, thanks for pointing out plot errors and inconsistencies. And to you, reader, goes the biggest thank you, simply for getting Marcus and the Tungrians this far. This is the book I had in mind when my young protagonist was following Dubnus up the road to the north from York, long before
Wounds of Honour
was complete, so thanks for helping me to realise that ambition. And stay with it, if you’re of a mind for more – we’ve a long way to go, you, me and the Tungrians. 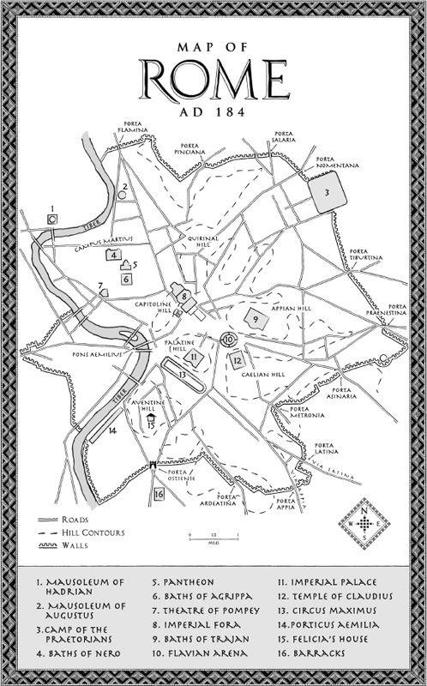 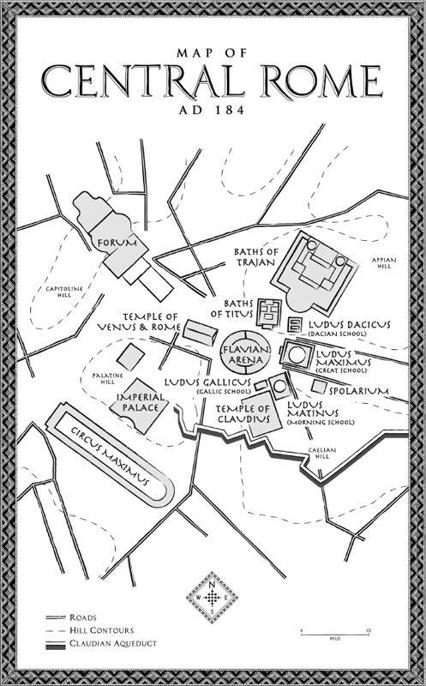 ‘Excuse me for bothering you sir. Do I have the honour of addressing Sextus Dexter Bassus?’

The man in the doorway nodded, playing a forbidding look over the two men standing before him in the small but neat front garden of his house, rendered private from the main road that climbed the Aventine Hill by a substantial wall that ran all the way around the property’s modest grounds. His look of irritation was due in no small part to the fact that the unexpected callers had summarily dismissed the slave who had opened the door to them, peremptorily telling him to fetch his master on the apparent grounds of the matter at hand’s ‘sensitivity’.

The taller of the two men, who seemed to be doing the talking for them both, smiled in a self-deprecating manner.

‘Me? A man of no great importance, although this may help to establish my bona fides in the matter I am desirous of discussing with you.’ The caller lifted the end of his belt to display a stylised tri-form spearhead decoration in polished silver. ‘This, Dexter Bassus, is the badge of a beneficiarius, a man chosen to give trusted service to one of his military superiors. In my own humble case I am just such a man, in the service of an extremely high-ranking military officer. His absolute need to stay nameless in this matter means that I am in turn required to nurture a similar desire for anonymity. I’m afraid that all I can tell you here, on your doorstep, is that my visit concerns events that occurred in the province of Britannia a little over two years ago.’

‘If this is about my brother—’

A raised hand stopped him in mid-sentence, the self-assured nature of the unnamed messenger’s gesture making him start backwards a fraction despite himself.

‘There’s nothing more to be said out here, I’m afraid, Dexter Bassus. If I might just come inside for a moment, I’m sure that everything will become clear …’

Bassus looked past the beneficiarius at the man waiting patiently behind him who was, if not completely ragged in his state of dress, demonstrating a robust attitude towards the requirements of both fashion and the regard of his fellow citizens. His eyes were roaming the modest garden with a faraway look, as if he’d never seen such a thing in all of his life.

‘And who’s this? Another one of your “high-ranking officer’s” men?’

The other man laughed, evidently amused with the idea.

‘Silus? Not likely! Silus is a man of the streets, and not accustomed to the workings of the Palatine,
if
you take my meaning?’

Bassus’s eyebrows raised at the mention of the hill upon which the imperial palaces and the throne’s sprawling bureaucracy had taken root.

‘I can say no more. As to my companion here, I keep him handy whenever I travel through the city alone, especially at this time of the evening. And there are risks connected with my visit to your house that go well beyond the simple danger of robbery with violence. I can make it no plainer for you, I’m afraid – either we discuss this matter in a more private place, such as your study, or both Silus and I will simply vanish from your door, never to trouble you again. I will tell my sponsor that you chose to be uncooperative, and he in turn will resign himself to your never knowing the truth about what happened in Britannia. It really is very much up to you.’

Bassus thought for a moment, clearly torn between caution and curiosity.

‘You can come in, but that man has a look to him that I don’t care for. He can wait in the garden.’

Silus smiled, a disquieting vision given the state of his teeth, and his employer mirrored his expression with a nod of agreement that was almost a bow.

‘How delightful for him! Silus is enormously fond of gardens, given his rather plain accommodation in the Subura district. I’m sure he’ll be more than happy to enjoy the fruits of your gardener’s labour in this pleasant evening’s warmth, while you and I discuss our business with a little more privacy than can be achieved on your doorstep.’

Bassus waited until the bodyguard had strolled away to sit on one of his stone benches before ushering the mystery visitor through the doorway and into the cool of the house. The man took two steps and stopped, looking about him with evident approval.

‘Very nice, Dexter Bassus, very nice indeed! Someone in your household clearly has the most exquisite taste in interior decoration … The lady of the house, perhaps, or possibly a particularly talented slave? Whoever it is, you’re a lucky man!’