The Fall of Candy Corn 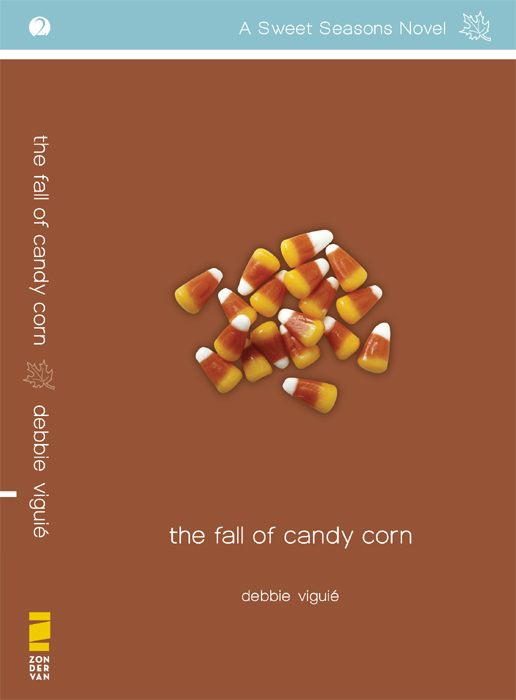 the fall of candy corn 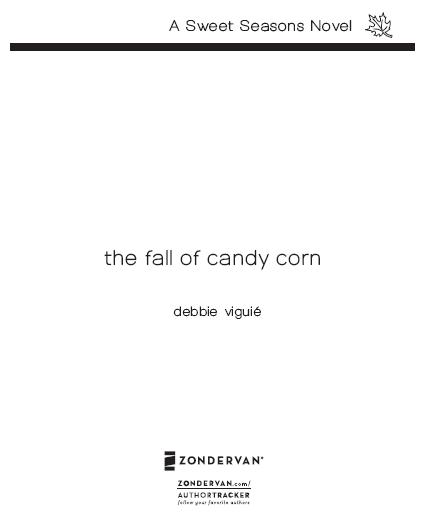 the fall of candy corn
Copyright Â© 2008 by Debbie ViguiÃ©

All rights reserved under International and Pan-American Copyright Conventions. By payment of the required fees, you have been granted the non-exclusive, non-transferable right to access and read the text of this e-book on-screen. No part of this text may be reproduced, transmitted, down-loaded, decompiled, reverse engineered, or stored in or introduced into any information storage and retrieval system, in any form or by any means, whether electronic or mechanical, now known or hereinafter invented, without the express written permission of Zondervan.

All rights reserved. No part of this publication may be reproduced, stored in a retrieval system, or transmitted in any form or by any means â electronic, mechanical, photocopy, recording, or any other â except for brief quotations in printed reviews, without the prior permission of the publisher.

To my parents, Rick and Barbara Reynolds, who love Disneyland and all theme parks and passed that love along to me.

I would like to thank everyone who has helped me through the course of writing this book. Thank you to my husband, Scott, and to all my friends who listened as I described the theme park in detail. Thank you to my agent, Beth Jusino, for believing in me. Thank you to Barbara Scott and the group at Zonderkidz who championed the story. Thank you all.

Read chapter 1 of The Winter of Candy Canes , Book 3 in Sweet Seasons.

Candace Thompson knew she was crazy. That was the only possible explanation for why, once again, she was sitting across the desk from Lloyd Peterson, hiring manager for The Zone theme park. A lot had changed since the day in June when she had been hired to operate a cotton candy machine. Still, sitting across from Lloyd, she felt self-conscious and a bit insecure.

“So,” he said, staring at her intently. “You think you can be a maze monster for Scare?”

She nodded. Scare was what they called the annual Halloween event at The Zone. Aside from putting frightening elements in traditional rides, during Scare there were a dozen mazes where monsters did their best to scare park guests as they wound their way through dark and creepy corridors.

“Then show me something scary.”

She got out of her seat and did the best growl she could. Unfortunately, she sounded less like a monster and more like a frightened Chihuahua.

She got closer to him than she would have liked, jumped up and down, swung her arms, and pounded her fist firmly on his desk. She could tell by the look on his face that he wasn't impressed.

She growled again and yelled, “I'm going to get you!” She felt like the world's biggest idiot. No one would be scared of a teenage girl, especially not one wearing a gray business suit and sensible shoes.

She threw back her head and screamed her loudest, shrillest scream. That, at least, was easy. It was a game her best friend, Tamara, and she had played when they were little. They had competitions to see who could scream louder or longer or higher.

She screamed for ten seconds and then sat back down in her chair. She expected Lloyd to laugh; she expected him to say something derisive. Instead, he looked at her thoughtfully.

“I have the perfect role for you to play,” he said. He wrote something on an orange slip of paper. “You're going to be Candy in the Candy Craze maze.”

“Candy?” she asked questioningly. “Am I going to be dressed up like a giant Twix bar or something?”

He shook his head. “Nothing like that. You should be proud; it's our latest maze. The lines for it will wrap halfway through the park.”

He handed her a stack of papers. “You can go fill these out. Then Saturday at nine a.m. report to the costume warehouse for your fitting and orientation. At that time you'll also be able to pick up your badge, ID, and parking pass.”

“Saturday at nine,” she confirmed as she took the stack from him.

“Out in the courtyard,” she finished for him.

Since she was a returning referee â which was the The Zone's name for an employee â there was slightly less paperwork this time. There was, however, an entire book of rules and policies regarding Scare. She had to sign several forms stating that she had received it, she had read it, she had understood it, and she promised to abide by it. It seemed like the golden rule of Scare was “thou shalt have no physical contact of any kind with players.” Players was what they called the customers. Touching a player during Scare apparently was grounds for immediate dismissal.

Once she finished filling out and signing all her paperwork, she returned it to Lloyd Peterson.

Checking her watch, she discovered that she still had an hour before she had to meet Tamara for a late lunch. She decided to head into the theme park to see a few friends.

The first thing she noticed when she entered the park was that the Holiday Zone was closed. Temporary walls set up around the area prevented players from going inside or even getting a peek at what was going on.

The Holiday Zone was one of nine themed areas inside The Zone theme park. The theme of the Holiday Zone changed throughout the year to reflect different holidays. It was the day after Labor Day so all the Fourth of July themes from summer were now being replaced with Halloween themes for fall. The transformation would take about ten days, and then the Holiday Zone would be open again for business.

Several key attractions throughout the rest of the park were also closed, getting their Scare overlay. The Muffin Mansion was one of them, she discovered when she went there looking for her friend Becca. The Muffin Mansion was unique in the park because half of it was in the Exploration Zone and half of it was in the History Zone. The Exploration Zone half was located near most of the kitchens, which looked a lot more like laboratories. There was a small counter where they sold the muffins. The side that was in the History Zone looked like an old-fashioned mansion, and guests could eat their muffins at one of the tables scattered around the parlor. It was from the History side that it got its name. It was from the Exploration side that it got its wild concoctions of muffins and its ever-expanding menu.

She stared for a moment at the construction walls around the building and wondered what the Muffin Mansion would look like when the walls came down. She also wondered where Becca was working while the mansion was getting its Halloween makeover. She glanced at her watch and thought about who else she might be able to track down to chat with.

She knew that two of her other friends, Josh and Roger, had ended their summer jobs and weren't there. Fortunately, both of them were going to be working Scare. They had managed to talk her into joining them. Spending time with them was one of the best perks of working the event. One of the others was that it paid slightly more than her summer job had.

Martha, her former supervisor, spent a lot of time off field in the employee-only areas. Candace wasn't sure if Sue, one of her other friends, had already quit her summer job as a janitor or not. That left Kurt. So Candace made her way to the History Zone.

Kurt was her boyfriend. The word was still exciting and new to Candace. He worked as a mascot, a costumed character. They had met the day she first became a Zone referee and, after some rocky moments, had ended the summer as a couple. She found him dressed like Robin Hood in the medieval area of the History Zone. She had gotten good at recognizing his dark hair and brilliant blue eyes no matter what costume or mask he was wearing.

“Hey, gorgeous!” he said, when he saw her, and he gave her a quick kiss.

Kurt turned back to Candace, “Away lady, for you are not my dearest love.”

Candace pretended to be crushed and put her hand to her forehead as though she might faint. The children laughed at that. “But I am! I am wearing this disguise to hide from the evil Prince John.”

“Robin will protect you!” the little girl said excitedly.