Read The Fall of Dorkhun Online 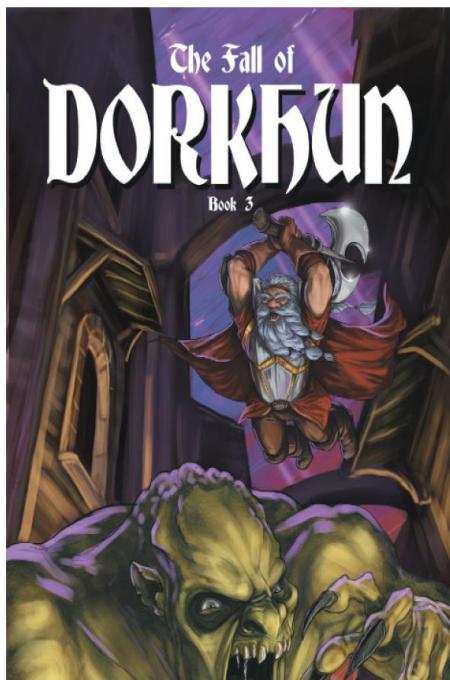 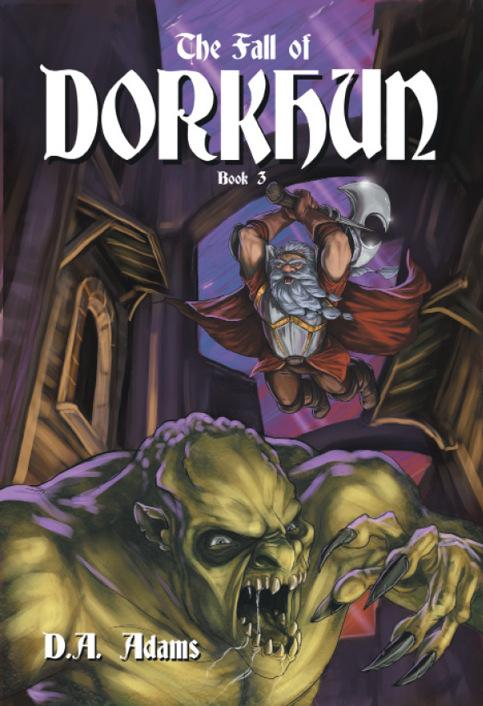 THE BROTHERHOOD OF DWARVES SERIES

The Brotherhood of Dwarves All rights reserved. No portion of this book may be copied or transmitted in any form, electronic or otherwise, without express written consent of the publisher or author.

The Fall of Dorkhun is a work of fiction. All names, characters, and places are the product of the author’s imagination, used in fictitious manner.

who salvaged me from the scrapheap…

…and for Collin and Finn, who give me hope, even on the darkest days.

An Incident in the Deep

The day’s light was fading from the mirrors above his fields as Ogdu finished weeding the last row. His arms and back ached from the labor, but he ignored the discomfort and returned his tools to the shed with enthusiasm reserved for the young embarking on their first adventure. The previous day he had sold his first two hogs of the season, and since he was now of age, his mother was reluctantly letting him travel into town for the night to have a little fun. He had been there many times, of course, but this would be the first overnight trip and the first with his own money.

Once the hoe and rake were hung neatly in their proper places, he bustled to the water trough to clean the thick mats of dirt from his blond hair and beard. The water ran cold down his back and chest, causing him to shudder a few times, but soon he was satisfied the dirt was gone. Then, he stripped off his grubby work clothes and rinsed off his skin as well as he could with the cold water. When clean and dry, he dressed in a fresh set of clothes he had hung out by the trough that morning and went inside the house to tell his mother goodbye.

She was in the kitchen wrapping a block of cheese in waxy cotton cloth when he entered, and he could tell she had been crying for most of the day. He couldn’t understand why she worried about him going into town. Kondelious was a modest trading post, hardly more than a village, with none of the dangers of a city like Dorkhun. He thought her silly for the concern.

“I just have to grab a couple of things,” he said, moving past her through the kitchen and into his room.

“I’ve packed some meats and cheese for you,” she called after him. “Don’t waste all your money in those dirty restaurants.”

He chuckled to himself as he took his belt from the dresser and fastened it around his waist. Then, he secured his money pouch and slipped his axe into a loop on the belt. Finally, he looked at himself in his mirror and slicked back his hair. He looked like a fully grown Kiredurk, with a beard as thick as any other’s. This trip would be his chance to prove to himself and everyone around him that he had become an adult.

“I’ll enjoy these,” he said, returning to the kitchen and picking up the food she had packed in a small leather backpack. “Thanks.”

“I might need it,” he returned, kissing her on the cheek.

“The only need for an axe in town is trouble. Please, I’m asking you to leave it here, at home.”

“I don’t want to be defenseless all the way there and back. Besides, I’m as quick and strong as anyone. No one’ll mess with me.”

“Well, I don’t like it, but you’re too much like your father, may he rest in peace, to listen to me.”

He kissed her on the cheek again and told her goodbye. She hugged him and squeezed tightly, as if her embrace might change his mind, but he pulled away and moved for the door. She followed him outside but stopped at the edge of their driveway as he made his way to the path that led to the tunnel to Kondelious. He strode swiftly, wanting to cover the nine miles in time to reach a tavern before the crowd thinned too much. Since the surface light had left the mirrors, the laborers would just be getting off work and heading for their favorite spots, and he wanted to be around as much excitement as he could find.

His family had farmed in this part of the deep for as many generations as anyone could remember, and he was glad to carry on the tradition, especially after his father’s accident. He enjoyed working his hands in the soil and watching his corn grow from seeds to food, but he also wanted to enjoy himself, maybe meet a pretty, young Kiredurk for company. Whatever happened on this night, he wanted it to be memorable. After having run the farm for nearly a year, he had earned at least one night of festivities.

The trail that connected several outlying farms ended at the mouth of the tunnel. From that point the trip became slightly more dangerous, for Ogdu knew hardly anyone along the tunnel, and occasionally, desperate dwarves were known to hide in the secluded sections and ambush travelers. He was tough enough to handle himself against any individual, and he believed that even if he were caught off guard, he was quick enough to react to most threats. His only real concern was if he happened to get jumped by several at once.

For the first four miles of the tunnel, the path was crowded with workers going home and merchants taking goods to other towns, but then the road cleared of other travelers. The time between seeing other dwarves grew longer and longer and the tunnel became quieter and quieter. He had never been a coward, but as he walked through the more remote sections of the trail, he gripped the handle of his axe and wished someone was there with him.

As he neared Kondelious, however, others reappeared in the tunnel, and he felt more secure around them, even if they were strangers. Just knowing he wouldn’t be ambushed and left to die alone made him more at ease, and as the fear subsided, his excitement returned. Paths branching off the main tunnel became more frequent as the number of houses near town increased. He had traveled this road hundreds of times before, but usually with his father and always on business. Now, coming into town alone with no hogs to lead or produce to manage, his senses were free to absorb more of the surroundings.

Like all townships of the deep, Kondelious was divided into three distinct sections. The outermost ring contained mostly houses, ranging from modest to wealthy. The only other buildings in this ring were theaters and music halls that offered wholesome entertainment. The next ring consisted of all the mainstream commercial and industrial buildings, everything from produce stands to blacksmith shops. The center of town was comprised solely of taverns, gambling halls, and lewd entertainment. This custom had been the norm for the deep through three kingdoms and was based on the notion that if all vices were centered, only people seeking them would venture into the middle of town, thus keeping those not interested from having to travel through a bad section to reach work or home. Of course, one downside was that any dwarf needing to cross town and wanting to avoid temptation had to circumnavigate the entire area, but for most Kiredurks, this was a minor nuisance.

Ogdu headed straight for the middle, hoping to find the busiest tavern. Sounds of laughter and revelry came from many, but one place in particular, with loud music and energetic dancing, caught his attention. He passed through the open doorway and edged into the crowd. The energy of the place, the dancing and music and smells, thrilled him, and he squeezed his way to the bar to order his first drink. The barkeep grunted unintelligibly when he asked for a pint of ale, but once Ogdu tipped generously, the old dwarf’s scowl turned to a half-smile.

“Preciate it,” the barkeep said, placing a bowl of nuts in front of the young dwarf.

“This place is great,” Ogdu returned, reaching for the bowl.

“We do good business. Your first night in town?”

“Sort of. I’m a farmer from the other end of the tunnel. This is my first on my own.”

“I see. Well, let me know when you’re ready for another.”

The barkeep went to the other end of the bar to wait on someone else, and Ogdu turned to watch the crowd dancing. Two pretty dwarves caught his eye, and he gawked at their movements as they kept time with the rhythm. When the song ended, they clapped in the direction of the band, and then one of them saw him staring. He quickly turned away, blushing, and as he turned, he bumped the arm of a thickly muscled dwarf beside him.

“Watch it, farm boy,” the dwarf boomed, his voice deep and menacing.

“I’m so sorry,” Ogdu said, extending his hand for an apologetic handshake, as was custom in the deep.

“Just keep it to yourself,” the dwarf grunted, not accepting his hand.

Ogdu looked around for another place to stand but the tavern was packed, so he tried to inch away from the large dwarf. He lifted his pint to his lips, but as he started to drink, his arm was jostled and most of the ale spilled onto his beard. He looked at the large dwarf, who was laughing with his friends.

“Drink often?” the dwarf teased, nudging one of them.

“I apologized. There’s no need to be a jerk.”

Ogdu stared in the dwarf’s eyes, and something there — or more accurately a lack of something – chilled him. Even more than in the most remote section of the tunnel, fear overwhelmed him, and for the first time in as long as he could remember, he wished his father was there. The dwarf’s arms were as big as his own legs and looked as solid as stone, and his white beard hung braided into two thick strands. Ogdu had never seen a more ominous figure.

The Mask of Night by Tracy Grant
Groupie Love (A Rock Star Romance) (Love in Shades) by Cassie-Ann L. Miller
A Christmas to Remember by Thomas Kinkade
Tessa and the Warden by Veatch, Elizabeth A., Smith, Crystal G.
The Betrayed by David Hosp
Catch a Falling Star by Fay McDermott
Jak Barley-Private Inquisitor and the Case of the Seven Dwarves by Dan Ehl
the Overnight Socialite by Bridie Clark
Rex Stout - Nero Wolfe 10 by Not Quite Dead Enough
The Snow Maiden by Eden Royce