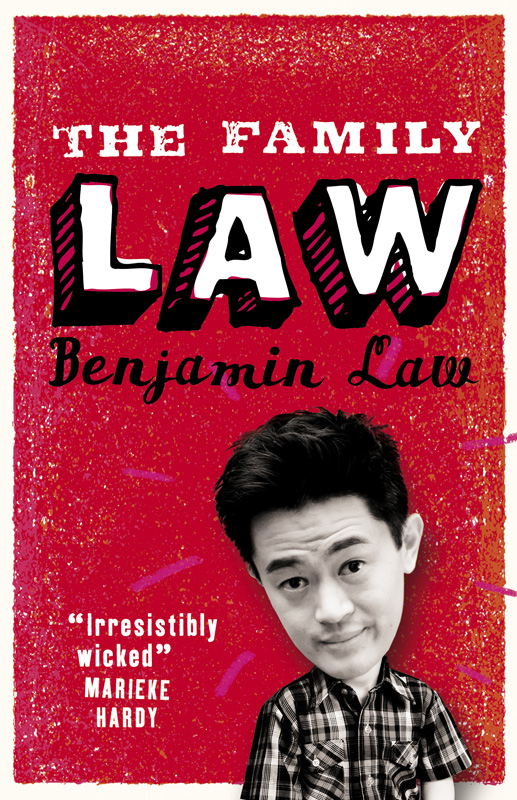 Some names of people and locations have been changed.

A
LL
R
IGHTS
R
ESERVED.
No part of this publication may be reproduced, stored in a retrieval system, or transmitted in any form by any means electronic, mechanical, photocopying, recording or otherwise without the prior consent of the publishers.

Scenes from a Family Christmas

A Room of One's Own

You've Got a Friend

We Have the Technology

Amongst the Living Dead

So, You Are a Homo

He did not consider if or how or why he loved them. They were just love: they were the first evidence he ever had of love, and they would be the last confirmation of love when everything else fell away.
â
ZADIE
SMITH
,
On Beauty

Lately, I've been stitching together a zine for my family that gets passed around over Christmas. It's called
The Family Dictionary
. Designed to resemble a language reference book, it compiles all the new in-house phrases, terminology and punchlines we've developed over the year, alongside helpful illustrations and diagrams. Some entries are universally suggestive and you wouldn't need to be a family member to understand them. No one needs to stretch their imagination to figure out what a
slitoris
might be.
Heurgh
â uttered as if you're dry-retching â denotes disgust and horror at something.
Flahs
is a bouquet of fancy flowers, and
scrongtrum
still sounds funny, even if you haven't seen the difficulty my mother has in pronouncing âscrotum.' (She's Chinese, and the placing of the âr' makes it difficult, she says.)

Most entries, though, are more esoteric. Some are hard to explain without the aid of accents. For reasons we've long forgotten,
commence seduction
has to be said mechanically with robot-arm movements;
yeh fookin' pig-nosed slag
â developed during a car-trip competition to find the most crass insult imaginable towards women â has to be Scottish. Other entries demand complex body movements and choreography. The
PardamontÃ©
is a dance style my sister Michelle has developed, which complements something I do called the
Dance of Despair
. Both resemble rhythmic gymnastics, but instead of using ribbons and clubs in a sports stadium, we use fitted sheets and plastic bags in the living room. It's really something; you should see us in action.

Over the years, though, we've lost too many entries. We were watching home videos of a family trip to London when I rediscovered a backlog of phrases and private jokes I'd forgotten, voices and characters we'd nearly lost. Who could forget Betty, John and Frank, the trio of confused, hearing-impaired seniors who verbally abused each other? And whatever happened to that skit with the incestuous father, where I'd surprise my sisters by violently banging on the bathroom door while they were taking a shower, telling them to let their father in? Oh, the
memories
. My family always joked that my memory was like a sieve, but watching those old videos made me feel as though I had an open drain. Realising I hadn't remembered those moments made me sad and anxious. What else had we lost?

Making
The Family Dictionary
has become an exercise in not forgetting. The zine provides trigger points, reminding me of the childhood fashion parades in
1993
, the strange weekends we spent with my dad in
1997
, or the family trip we took to Japan in
2008
. All of the entries in
The Family Dictionary
have stories behind them, although some are starting to fade.

Here's one of them. When our maternal grandmother â my Poh-Poh â died some years ago, my younger sisters Tammy and Michelle and I flew back to Hong Kong with Mum to collect her ashes. Now an orphan, Mum had been devastated by every aspect of her mother's death: how she'd been forced into a cramped Hong Kong nursing home; the clinical way the funeral had been conducted; the impossibility of her joining us in Australia in those final years; the fact she hadn't made it to her mother's bedside in time. Knowing the trip would be depressing, we all tried to buoy the mood by calling the trip the Ashes Tour and making cricket-related jokes.

Once in Hong Kong, the four of us went to a grim, administrative-looking building that could have been a post office. After Mum signed some forms in Chinese script, the staff members fetched the urn from the back room. It was sealed with so much tape that it resembled a parcel from overseas that had been lost in customs and redirected a hundred times over. Mum took it in her hands, looking lost.

For a moment, I thought she was going to collapse with grief. Instead, she passed the urn to me and fumbled around in her handbag.

âWhat are you looking for?' Tammy asked.

âTake a photo,' she said. âI want to remember this moment.'

Clearly, my family has a thing for documentation.

The days that followed were punctuated by Mum's spontaneous crying sessions. These were difficult to predict and even harder to help ease. There were variations in the quality of the sobbing, depending on the time of day. In the afternoon, we'd hear sudden gulps of air in our room, thinking it was a broken hotel vacuum cleaner until we realised it was Mum weeping next door. Her crying was gaspy and staccato for her evening shower, completely different from the late-night weeping when she thought we were asleep. In the stark light of day, the weeping would be dignified and silent: single streams of tears trickling underneath dark sunglasses.

At night, after watching Hong Kong television in my hotel room, Tammy, Michelle and I would go back to Mum's room. She'd be propped up in her bed, speaking to her mother's urn as though Poh-Poh were right beside her. We'd watch her talk for a while in secret; then, taking my lead, we'd all walk in, assuming she'd stop. Mum just looked at us and smiled with red eyes.

We all took turns, taking the urn in our hands and talking to it as if our grandmother was still alive. It was a little creepy, knowing these were only
some
of Poh-Poh's remains; we knew the rest were held at Tseung Kwan O Chinese Permanent Cemetery in a marble box somewhere. We sat there, trying to start a conversation with the ashes, unsure whether we'd gotten elbows or knuckle, calves or hair.

âSo â¦ Poh-Poh,' I said, scratching the back of my head. âYou okay in there?'

By the end of that week, all the crying, tension, urn-talking and relative-visiting had taken us to the edge, and we started to argue. To cheer ourselves up, we ventured to the recently opened Hong Kong Disneyland, figuring that if anything could unite us, it'd be a theme park. But the heightened emotions of the trip had chipped away at our stamina, and the endless array of spinning rides made us nauseous and fragile. By sunset, we wanted to go home. Crowds from every corner of Disneyland converged on the massive castle where the twilight fireworks spectacular was due to begin. After two hours of standing there waiting, cramped and unmoving, we wondered why it was taking so goddamned long.

âThis is going to be crap,' I said. âDoes anyone else's legs hurt?'

âCan't you wait?' Mum scolded. âWe didn't fly all the way to Hong Kong just to miss this. Plus you'll never get back through the crowds this way.'

Michelle bent over a little in pain.

âSo, what
is
this show?' Tammy asked, flicking through the pamphlet. âIs it just fireworks and Disney characters dancing?' She sounded unimpressed.

Mum's face darkened and we knew not to press her. We'd learnt not to overstep the mark. Anything could set her off and it would end in tears. After we had stood there in silence for a while, someone eventually spoke up.

âWouldn't it be funny,' they asked, âif Minnie Mouse came out of the castle right now? But instead of smiling and dancing, she just put her hands on her cheeks and screamed to the crowd, “I was
raaaaped
!”'

For some reason, we all doubled up laughing. It wasn't long before we started taking turns scripting out the scenario: Minnie Mouse would come out of the closed doors, her dress shredded, pleading for help, before one of Snow White's seven dwarves dragged her back into the castle and slammed the door shut. The crowd â holding showbags and dressed in Mickey Mouse ears â would hear muffled screams, but would clap softly, thinking it was part of the show. The screaming would continue as the fireworks were lit, exploding all around us, silencing Minnie's pleas for help, while the crowd stood there, baffled and confused. God it felt good to laugh.

âWhat's
wrong
with us?' I said, wiping tears from my eyes. âWhy are we laughing at this?'

âWe're going to hell,' Tammy said. âIt won't be funny any more when one of us actually
is
raped.'

âWe probably
deserve
to be raped now,' I said.

âBut until that day,' Michelle pointed out, âwe'll be laughing.'

With that, the lights around the park dimmed and all the tourists started whispering and clapping. A booming timpani and brass section made way for a medley of theme songs, and moving images from Disney's vaults were projected onto the castle. Mum grabbed my hand tightly, the way she does when she's overwhelmed and knows she's going to cry.

âIt's just that Poh-Poh would have liked this,' she said.

The fireworks were beautiful. I never thought I'd be the type to get emotional watching a grown man in a dog suit doe-si-doe with Pluto to the soundtrack of
Fantasia
. And perhaps it was the pent-up emotions of that trip, or because I missed my grandmother, but I started crying a little too.

Since then, the phrases
I was raped!
and
Until that day, we'll be
laughing!
have ended up in
The Family Dictionary
. They come up every time we've chuckled at something tasteless and horrible that might one day actually happen to us â having a stillborn child; limb amputation; brain damage; going on life support; being forced into sex. And every time someone says it, I smile to myself, thinking how strange it is that such hideous jokes can remind me of how I miss my grandmother.

In The Wreckage: A Tale of Two Brothers by Simon J. Townley
We Put the Baby in Sitter 2 by Cassandra Zara
Joan Hess - Arly Hanks 09 by Miracles in Maggody
Healer (Brotherhood of the Throne Book 2) by Jane Glatt
God Loves Haiti (9780062348142) by Leger, Dimitry Elias
The Spirit is Willing (An Ophelia Wylde Paranormal Mystery) by Max McCoy
Captain Future 26 - Earthmen No More (March 1951) by Edmond Hamilton
Tamed by the Bear (Bear Creek Clan 3) by Harmony Raines
Girl in Landscape by Jonathan Lethem
Melody (THE LOGAN FAMILY) by Stacy-Deanne