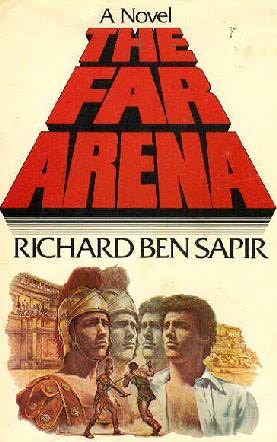 A body is found, in what used to be the German Sea in the Roman times, this body turns out to be a Roman gladiator and is reanimated. A story of then and now

Richard Ben Sapir is the co-author of the widely read 'Destroyer' series. His previous novel
Bressio
was highly acclaimed.

Pan Books in association with Seeker and Warburg

This book is sold subject to the condition that it shall not, by way of trade or otherwise, be lent, re-sold, hired out or otherwise circulated without the publisher's prior consent in any form of binding or cover other than that in which it is published and without a similar condition including this condition being imposed on the subsequent purchaser

aedile a Roman magistrate, not a major political position.

atrium the front parlour in a house, used by wealthy men to conduct business and receive retainers.

aureus a gold coin. The abbreviation for the element gold. 'Au\ comes from this coin.

bestiarii gladiators specializing in guiding and killing animals. Some would kill using their teeth to break the necks of dogs or foxes.

bones the forerunner of dice. Bones were thrown for combinations of smooth and rough.

centurion a military commander of one hundred men.

cohort a fighting unit of the legions.

lanista a trainer, and often owner, of gladiators.

larifundia (sing, larifundium) giant farms of the Roman Empire, their like not seen again for nineteen hundred years until the modern agricultural corporation of industrialized society.

perist
ilium the private part of a house, used only for family and friends.

praetor Roman governor of a province. A highly lucrative position. It was said the Roman had to make three fortunes when a praetor: one to repay bribes; a second to repay himself for the cost of the games; and a third for himself. Pontius Pilate, mentioned in the Gospels, was a praetor.

secutor a gladiator using sword, shield, and helmet, most often matched against retiarii, who used tridens (spear) and net.

sella a chair with a back. Roman chairs ordinarily lacked back supports.

tonsor a slave trained as a barber. The modern phrase 'tonsorial parlour' comes from this Latin word.

vigilis a combination of police and firemen.

wooden sword as a symbol for a gladiator being allowed to leave the arena free, a wooden sword was given at the games.

Acknowledgments
; This book had the help of many people -researchers and critics. Some of them were paid. Some of them weren't. I mention them all with thanks: Judith Netzer, Fred Fogel, W. B. Murphy, Ward Damio, Marolyn Sawyer, Betsy John, Carol Ettinghouse; and Steve McGee, who helped me to climb into the gladiator's arena in Pompeii through the back way so I saw it from the outside of the town.

offender of the gods of Rome;

and, therefore, enemy of the

Senate and People of Rome,

did not feel the core bit of the Houghton rig neatly take a piece of his gracilis muscle from the right thigh, 8.2 metres beneath the glacial ice north of the Queen Victoria Sea.

The body was quiet as an unborn thought in a dark universe, stopped on the bare side of life, stilled on its way to death by the cold. Even the hair did not grow, nor did the enzymes and acids eat away at the cells. More still than death it was, stone perfect still.

The retinas of the eyes were solid. The ligaments were solid. The blood that had stopped suddenly in the veins and arteries could be chipped with a knife. Each hard corpuscle was where it had been when the body rolled nude, bouncing along ice, as stiff as wicker, into what was then called the German Sea, far south and centuries before.

At that time, being lighter than water, it floated north and joined with other ice, and, being lighter than ice, it moved within the ice northward, an inch, sometimes a foot a year, sometimes many feet. While some ice broke off and moved south or east to warmer places only to become water again, then mist, then rain, and sometimes ice again, this form remained in its unbroken water and moved north.

No part touched oxygen until the core bit, on its way towards a deeper part of the earth, went through a small piece of thigh and brought it up through a barrel core to a dark, chill night at the top of the world.

It was the long night of winter, and the men who worked here covered their faces and hands with layers of leather and fur and nylon and all the insulation that living skin needed not to freeze into pale death. Timers, worn under the layers of arctic shields, buzzed when the men had been out more than their allotted number of work hours.

Three white domes, technological wombs in a frigid world, supported the life serving the drilling rig. Exterior tunnels, like rigid veins, stretched from the domes to the rig and between each other.

There were no roads up here, and the nearest warm life was an air base two hours away by snow machine.

Up from the ice came core samples, perfectly round pieces of ice. Arctic mittens guided the core tube coming up from this outer layer of the world, this external skin at the earth's cold top, and at one-metre intervals sawed off a section. Then the mittens cradled each section and carried it through a tunnel that felt warm, even though it was below freezing, because it merely protected against the sharp wind. The derrick man brought the sample into the laboratory dome and laid it in a rack above a long white sink.

He took off his arctic mask and felt the mouth part crack in his mittens. His breath had frozen to ice.

The rockhound, the geologist for exploration, sat on a high chair over the sink. He was a big
man and wore checkered long joh
ns under a bright red shirt and worn blue jeans. He signalled for the derrick man to push the sample down from the holding rack to the sink.

The derrick man wanted to talk. Dr Lewellyn McCardle did not want to talk back. But if the man took off his mask, it meant he was going to stay. He would find something to start a conversation, which might begin with the weather or the new equipment or the food, but it would end up with how badly the superintendent in charge of the crew was doing things and whose side was the rockhound on.

McCardle, a big man of much flesh and bone and muscle, had to take the extra care that large hands needed with precision instruments. He shaved off an end of the core sample.

His round face was red, and the tufts of remaining hair mingled strawberry blond with white, and it would have been a very cute face if he were not six foot three inches tall and closer to three hundred pounds than two hundred. He was bigger than most men of the small crew, even the roughnecks and roustabouts who were known for their size. He sometimes suffered a locked knee from an old football injury. He had a PhD from the University of Chicago, but the men always called him Lew.

He felt the rotary
drill, which had restarted, send its vibrations up through the floor, a new synthetic compound which a vice-president of Houghton, back in Houston, Texas, promised would use air as insulation so effectively, everyone could 'walk around in his bare feet up there, and never need anything more
than slippers inside at most’.

Lew McCardle had worked for Houghton for twenty-five years. He was going to retire after this last exploration. He had faith that his employer would pay his retirement. He had twenty-five years of faith. He also knew cold-weather explorations. He didn't pack slippers. He had more faith in the ice than in the new Thermal-Floor-Pack.

He brought two books instead. His size helped with that. Oil men did not particularly like people who read books, nor did they trust them. Somehow Lew's size, and his origins in a backwater Texas town, compensated for his reading. He even read poetry. This they overlooked because, while he was 'funny', he was also nice.

The derrick man finally found something to talk about. It was good enough to unzip his arctic jacket. 'Lew,' he said, 'what's that ?' He pointed to a pale discoloration in the tube of ice, like a whitish banana skin, smaller than a jagged fifty-cent piece. Lew swung an overhead fluorescent bulb circled in a jeweller's magnifying lens over the discoloration. It always happened in these cold-weather domes that you began even to smell your own body. It was like living in a sock.

'Are you staying or going?' he said to the derrick man, without looking up. 'If you stay, take off that outer layer before you start sweating up. Your body has got to breathe. Or go now.'

The piece had streaks of pink. Lew put his left forefinger and thumb around the discoloration. He could see the ridges in his fingers under the lighted magnifying glass. He pressed the finger ridges against the discoloration. It gave, but there was no crunch of crystals cracking.

McCardle suddenly looked at his hands. Then back at the discoloration.

'You cut yourself?' he asked.

'No,' said the derrick man.

'You can cut yourself and not feel it,' he said.

The derrick man peeled off his outer coat down to a light windbreaker covering a layer of sweaters. He scraped the melting ice from his arctic mask.

'Nothing is nothing,' said McCardle.

'Yeah?' said the derrick man, amazed. He bent over the sample in the sink. The choppy surface was now glistening smooth along the tube, water reflecting the ice. It was melting. The derrick man bent low over the discoloration. He sniffed.

'It smells funny,' he said.

'Where does human flesh come from but a body ?'

'Do you think we're on top of a graveyard ?'

'Then what's a body doing down there?'

'I don't know. And please don't be making the crew more nervous than they have to be. We've got enough to deal with
,
with the cold.'

'Sure, Lew, but what would a person be doing this far up? Do you think there are other oilmen ?'

"That ice we're going through is very old, thousands of years. I don't know how old. But more than several centuries. We've been using fossil fuels for only a single century.'

'What about the Europeans ?'

'By we, I mean man. Mankind. This happens sometimes near the surface. It won't do anyone any good if you mention this. Please.'