Read The Far Bank of the Rubicon (The Pax Imperium Wars: Volume 1) Online

The Far Bank of the Rubicon (The Pax Imperium Wars: Volume 1) 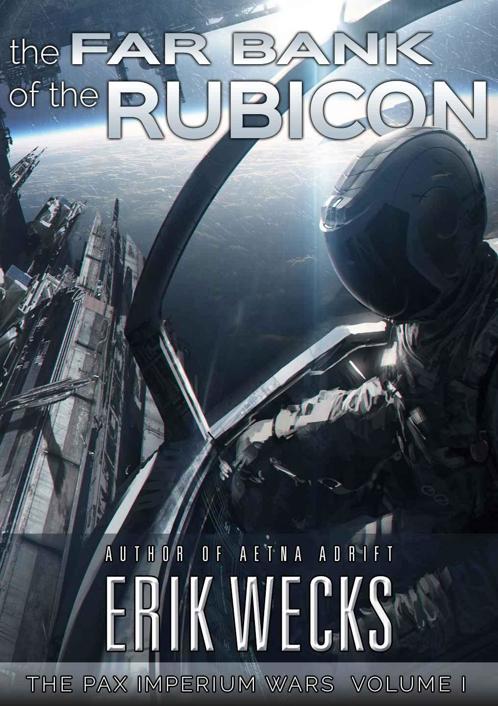 Part One: The Sky Blushes

A Walk With His Father

Anna and the King

The Far Bank of the Rubicon

The Battle for Apollos

First Published in The United States of America

No part of this publication may be reproduced, stored in a retrieval system, or transmitted in any form or by any means without the prior permission in writing of the publisher, nor be circulated in writing of any publisher, nor be otherwise circulated in any form of binding or cover other than that in which it is published without a similar condition including this condition, being imposed on the subsequent purchaser.

There is a long list of people to thank who were vital in the creation of this book. First of all, I have to thank my first readers, Andy Sherwood, James Wood, my daughter Lily Wecks, and my wife Jaylene. All of you were invaluable in the process of burning out the dross.

I also need to thank those tireless encouragers who helped me keep going along the way: Jason Gurley, MeiLin Miranda, Mike and Janice Fisher, along with everyone involved in the second Saturday writing group at the Vancouver Community Library.

Thanks to all my Kickstarter backers, in particular Mike Fisher, Andy Sherwood, Tim Ohlson, John Gustavo Gomez, Revek, and Bob and Robyn Mickelsen. Without you this wouldn’t have happened.

A huge thank you must go out to Andrée Wallin. I am incredibly grateful that you let me put your work on the cover of my book. I have a great respect for what you do. Thank you so much.

As always, I have to thank my copy editor Jonathan Liu for keeping my spaceships landing in hangars, not hangers.

Jaylene, Lily, Nora and Stephanie—you each mean the world to me. I love you all.

who was as essential as I was.

May your
pew pew
be awesome and your emotions be weepy (but not too weepy).

Thank you so much for picking up a copy of
The Far Bank of the Rubicon
. I can’t wait to introduce you to (or take you back to) the world of the Pax Imperium. I have a great trip planned for you.

One note:
The Far Bank of the Rubicon
contains a scene of explicit sexuality that may not be to some reader’s tastes. Feel free to jump ahead to the beginning of the next chapter if this isn’t for you.

I wrestled deeply with how I wanted to write it. For me, sex and intimacy go hand in hand, so I don’t tend to believe that arousal without intimacy is a useful dynamic to cultivate in one’s life.

If you’ve read
Aetna Adrift,
you know a little of my thinking on the topic. In that book, I tended to make clear what was taking place and then close the curtain. In this instance, I do not, and there is a reason for my decision.

In
The Far Bank of the Rubicon
, I wanted to show the kind of sex that I find to be the sexiest—the kind where I find the most fulfillment. In our communities, we are bombarded with images and messages which say that position, sexual compatibility, a multiplicity of partners, or spur of the moment sex provide the only means to a truly sexy relationship. Long term intimacy is downplayed. Marriage is where sex goes to die, so the saying goes. However, there have been
good studies
which show that, when it comes to the real world, this isn’t the case. I wanted to write fiction that celebrated the other kind of sex, the kind that I find most erotic.

The more I thought about it and asked friends about it, the more I became sure there was really no way to show what I wanted to show if I faded to black. So in this instance, I allow the reader to journey with two people discovering sex together for the first time.

If it turns you on, I hope that like the characters in my book, you have a relationship which provides safety based on exclusivity along with equality, intimacy, and fidelity where you can spend that energy. Like my characters, I hope you continue to grow in your ability to understand and cherish your partner and the bonds between you.

The biting temperature didn’t bother Elijah Summers, and if it made the movements of his opponents just that much slower, all the better. Minus two made it the coldest night in Washington, D.C., in several years. The brightly lit, snow-covered lane worried him more. There would be no hiding from the CEO’s bodyguards when he eventually had to cross it.

From the gatehouse where he stood, Summers looked across the untouched white street to the historic home beyond. The nondescript, black limousine hovered just off the ground in the drive behind the closed gate. The driver would make the most difficult target. Although the vehicle carried official plates, it was not the standard limousine for the CEO of the corporate state called Unity. Tonight, the CEO intended to be discreet. That didn’t mean the limousine would be a soft target. For an ordinary assault team, it would have been a difficult nut to crack, but Summers had some built-in advantages.

Briefly, he checked the second story window to the right of the porch over the Georgian colonnade. As he looked, the focus of the eyepiece over his left eye zoomed into the window. Inside, a light was left on low. He could barely make out a rhythmic movement of shadows, but that wasn’t really necessary. The quiet sounds of sex told him the target was still on schedule. The CEO wouldn’t leave early tonight. Summers looked back to the car below. Three guards outside and a fourth inside. The target was making this all too easy.

Cowhill truly is a child
, thought Summers.
Give him a tit to suck and too much food, and he’s completely content. What a waste.

With ten seconds left on the countdown, Summers picked up the small mag pistol on the shelf next to him. It would have taken much less time to simply kill the night guard who previously inhabited this booth on nights like this, but Summers prided himself on efficiency. Collateral damage could come back to haunt you later. For Summers’ sense of order, it had been the right thing to simply pay the bribe to get the job in the Unity security division guarding Mr. and Mrs. Brown. Besides, the position had allowed him to observe the mating habits of the target for the last month, and that made his job all the easier. It also meant he knew the Browns would almost certainly remain at the Kennedy Center for another couple of hours. Another unnecessary complication avoided.

Time—three minutes until his boss arrived.

The world shifted slightly as Summers opened his mind to intraspace. Instantly, all the objects around him connected to the cloud became evident. Summers now effectively existed in two places at once. One part of him remained anchored in the physical world. Another part of him existed in intraspace, able to interact with objects there, some of which existed only as electronic fictions.

What made Summers so unique was his ability to live in both worlds simultaneously. Until he had been altered by a top secret division of the Department of Defense, people could only exist in either intraspace or in meatspace. With concentrated effort, he could take action in two places.

Summers checked in with his AI handlers at the Defense Department to make sure that his avatar had been properly encrypted. This whole operation wouldn’t work if one of the AIs on the car or the gate got wind of his existence. Assured that his encryption was in place, Summers concentrated and sent his avatar dashing across the street at speeds well beyond human physical capacities. He passed through the gate as if it didn’t exist, and along the way, dropped a universal key in through its electronic connection to the alarm company. Summers moved ahead. He paused near the car, then sent three quiet but sophisticated code breakers to attack one of the computers on the vehicle. Their particular target handled the environmental functions, including the doors and windows. There were two other computers on board, a senior AI for command and defensive measures, and another for the engine and mechanics.

In meatspace, Summers stepped out of the guardhouse, pistol in hand. He was in the process of raising it when he hesitated. The windows were supposed to be the weakest link on the vehicle. However, his AIs were having more difficulty than expected. He waited, wondering if his cover had been blown.

In his heads-up, Summers noticed the heat signature of a car descending onto the well lit, snow-covered street. He knew the vehicle. The Browns were home early. Summers cursed under his breath. Any sane person would have just descended directly into their driveway, but the Browns insisted on pulling up to the gate and having him open.

Summers threw a higher level set of code crackers at the AI in the limousine, put the pistol back in his pocket, and stepped into the guard house. The Browns drifted up to the gate. He punched the button in the booth, and the gate squealed as it started to open. Summers stepped to the door. The Mrs. liked to talk.

“Anything of interest happen on our street tonight?”

Through the crack in the tinted glass, Summers could just make out the face of the eighty-year-old, middle-aged woman. She wore a large set of pearls around her neck and a fur stole on her shoulders.

While he was technically able to inhabit both worlds, it worked much better when the two parts, meatspace and intraspace, worked in concert. It took all his will and focus to keep an eye on his attack and still appear passive in the physical world. “No, Ma’am. Nothing at all. It’s been quiet.”

“Did Mr. Kepler walk his dog?”

“No, ma’am. He didn’t.” The gate continued to open at a glacial pace.

Mrs. Brown laughed. “Well, that’s a first. I don’t think in the thirty-five years I’ve lived here, Mr. Kepler has ever missed walking his dog. That tells you how cold it is tonight.”

Amber Brown Wants Extra Credit by Paula Danziger
Waiting by Philip Salom
Guarding the Quarterback (Champions of the Heart #1) by Liz Matis
The Lucifer Gospel by Paul Christopher
The Hellfire Conspiracy by Will Thomas
All Men Are Rogues by Sari Robins
Black Ceremonies by Charles Black, David A. Riley
Touch of Mischief 7.5 by C.L. Stone
Mary Gillgannon by The Leopard
Elsinore by Jerome Charyn