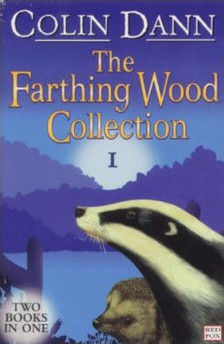 6 One Trick Too Many

13 The Last of the Otters

14 By the Great Beech

In the Grip of Winter

4 The Search for Badger

5 What had happened to Badger

10 A Question of Loyalties 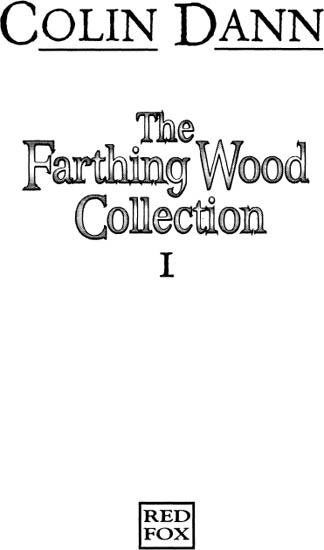 The air was quite still. Starlight bathed the frosty ground with silver. The woodland seemed to be drowsing in the silence of a winter’s night. A lean fox trotted noiselessly beneath the trees, seeking shelter before sunrise. A vixen’s cry – one he recognized – caused him to halt suddenly, then change direction. He answered the cry with three short yaps.

The vixen was standing under a huge beech tree, her body pressed against its smooth grey trunk. She too was lean; leaner than the fox. She called again. The fox ran towards her.

‘I need your help,’ said the lean vixen. ‘Just as before.’

‘It’s for a different reason this time,’ the vixen said. ‘Come and see.’ She led him through the Wood to a clearing. In the clearing several animals were darting about, chasing one another playfully. These were otters. The foxes stood and watched them for a while.

‘They are,’ came the answer. ‘The otters. This is
my
hunting territory. I’ve told them to leave, but they only mock me.’

Lean Fox turned to look at his companion. She was regarding him steadily; expectantly. He turned away again. ‘They don’t appear to be doing any harm,’ he murmured.

‘Of course they’re doing harm,’ Lean Vixen corrected him irritably. ‘They’re snapping up all the voles. What am
I
to eat?’

Lean Fox’s eyes widened. ‘Otters? Killing voles?’ he queried in surprise. ‘Why would they do that? They’re fishing animals.’

‘How do I know why?’ the vixen barked. ‘Because they’re hungry, I suppose. I thought you’d be some help,’ she added disappointedly.

‘Oh, not that old story again,’ the vixen sighed. ‘That’s all we ever hear. Well, what am I to do then? Starve?’

‘Isn’t there anywhere else you can go? I mean, there are voles and mice throughout the Wood. Plenty for everyone.’

‘It’s difficult poaching another fox’s territory,’ Lean Vixen replied. ‘Besides, what’s to stop these precious otters scouring other areas once they’ve laid this one waste. They’re lethal hunters. I’ve seen them in action.’

Lean Fox felt he had to do something. The vixen was relying on him. He trotted forward. As he approached, the otters stopped gambolling for a moment and looked at him. They showed no fear.

‘Why must you take our prey?’ Lean Fox yapped
boldly, aware the vixen’s eyes were on him. ‘Don’t you have enough of your own?’

The largest otter, a mature adult and a sleek, healthy-looking animal replied airily, ‘No, we don’t, although what business it is of yours I fail to see.’

Lean Fox’s hackles rose. ‘It’s my business because voles are a fox’s staple diet,’ he growled.

The younger otters giggled in a kind of high-pitched whistle. Lean Fox tried to chase them away. They began to show off, tumbling and somersaulting and leaping around, but always keeping well out of his reach. The otters had a wonderfully fluid kind of agility. Lean Fox returned to the vixen’s side.

‘I don’t think there’s much I can do at present,’ he muttered. ‘They simply make me look foolish.’

‘Something
will
have to be done,’ Lean Vixen declared. ‘Why should foxes give way to these … these … animal clowns?’ 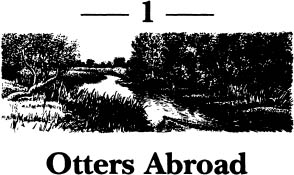 There had always been otters in Farthing Wood. They lived on the fringe of the woodland along the banks of the stream. There they made their homes and dived for fish and frogs and mussels. Over the years their numbers had steadily declined as the resources of the stream – and indeed the pond – had dwindled almost to exhaustion. But as long as there were otters, however few, Farthing Wood was safe and the site protected from development.

These otters enjoyed a special status because they were the only ones to be found over a wide area. Local wildlife groups had campaigned hard, and successfully, for their preservation. The otters knew they were special and they made sure all their neighbours knew it too. They were far from being the most popular of creatures. When they turned to hunting on land because of the shortage of aquatic prey, there was bound to be resentment.

The crucial decision had been taken by one of the most experienced females. She was a mother of three cubs, none of whom was getting enough to eat. One evening, instead of leading her youngsters out of their
holt to the stream, she headed for the woodland. The cubs were puzzled.

‘The water! Where’s the water?’ they chattered to each other.

‘Hush,’ their mother quietened them. ‘Aren’t you hungry? Of course you are. Well, we must try our luck elsewhere.’

The cubs began to treat the outing as an adventure. They bounced along behind their sleek mother, whistling excitedly. The darkness of the Wood, however, affected their high spirits. The cries of unfamiliar night creatures reached their ears. They fell silent. There was a rustle of dead leaves and Sleek Otter, the mother, pounced suddenly. The youngsters surrounded her. A vole dangled lifeless from her jaws. Sleek Otter dropped it amongst her cubs.

‘The first of many,’ she said. ‘This wood’s alive with prey.’ She watched the cubs sniffing at the unusual food, unsure of its taste. ‘You’ll soon get used to it. You’ll
have
to,’ she added. Her rippling body bounded forward again.

The cubs juggled with the dead animal, tossing it from one to another. Finally one of them ate it, chewing the vole on one side of the mouth as with a fish.

‘Good,’ the cub whispered and smacked her lips. The three cubs rejoined the hunt.

Sleek Otter’s expertise proved to be deadly to any mice, shrews or voles who were scurrying through the leaf litter that night. These little animals had accustomed themselves to the threat of foxes or stoats. But the swiftness and acrobatics of the otter party were something new to them. They didn’t know how to escape these new hunters. All four of the otter family
caught prey and their appetites were more than satisfied.

‘Fish or no fish, we shan’t starve,’ cried Sleek Otter.

The cubs took up the chant. They felt pleased with themselves.

And this was when Lean Vixen, who was hunting that night too, first encountered them. Her astonishment at seeing her territory invaded by otters made her lose her own quarry and she went hungry.

‘Clumsy fox,’ shrilled the cubs. They had witnessed her bungled attack on a young rabbit which had managed to reach the safety of its burrow. Lean Vixen growled and she bared her teeth.

‘Pay no attention to her,’ scoffed Sleek Otter. ‘She wouldn’t dare to meddle with us.’ The otters ran on, under the nose of the vixen who gaped after them. Moments later Sleek Otter killed a shrew without apparent effort, as if to emphasize her superiority. The cubs giggled with delight.

Lean Vixen watched angrily as Sleek Otter’s antics produced four more voles for her cubs to enjoy. The sight of the otter family gobbling up prey from her own preserve made the vixen very angry.

‘Haven’t you space enough to hunt around your den without stealing from me?’ she barked.

As if by way of an answer Sleek Otter snapped up a fieldmouse and ate it herself with elaborate pleasure. ‘We’re not stealing anything,’ the mother otter retorted. ‘The mice are here for any hunter to catch. It’s not my fault you weren’t skilful enough to catch them first.’ She turned and called to her cubs. ‘Come, youngsters. Let’s go for a swim.’ The otter family went on their way, chattering and laughing merrily.

Lean Vixen shivered in the cold night air. ‘They’ll be back,’ she told herself. ‘I need some support.’

Other otters joined the hunters in Farthing Wood as the winter progressed. They really had no choice. Fish large enough to satisfy their appetites were increasingly difficult to find. Frogs, their other mainstay, were in hibernation and would mostly be hidden until the spring. So the competing foxes, stoats and weasels began to suffer. They couldn’t keep any part of the Wood for themselves. There seemed to be otters all over the place, seizing their quarry before their very eyes.

‘You and me,’ said Sly Stoat to Quick Weasel, ‘are fools. Look at the way we’re being cheated. And what do we do about it? Nothing. No wonder those otters are so scornful.’

‘Don’t you have a sneaking admiration for their ability?’ Quick Weasel asked. ‘Otters have such style. But you’d better talk to the foxes.
They’re
in a very ugly mood.’

‘Maybe,’ Sly Stoat grunted, ‘although they appear to me to be as hypnotized as you are by the whole display. If there’s going to be trouble I’ll be on the side of the foxes. We ought to drive those slippery customers right back into the water where they came from.’