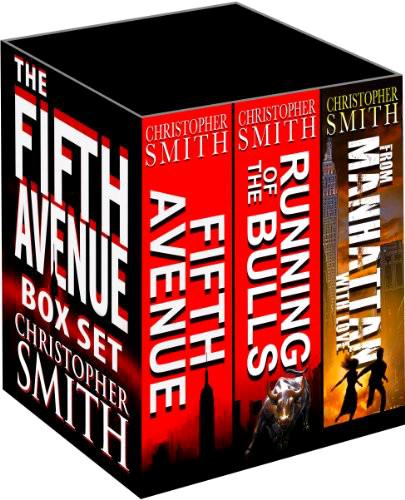 For the first time, all three books in the international Top 100 best-selling FIFTH AVENUE series are now available in one boxed set! Look for the fourth in the series, PARK AVENUE, in 2012.

Look beneath all the power and all the wealth that represents New York City's Fifth Avenue, and you'll find greed, blood, revenge. In the international best-selling thriller "Fifth Avenue," each intermingles within a revered society that is unprepared for what's in store for it when one man finally strikes in an effort to destroy another man for murdering his wife thirty-one years ago.

Louis Ryan is that man. George Redman, his wife, two daughters and their close friends are his targets. Both men are self-made billionaires who came from nothing to stake their claim to Fifth Avenue. But when Louis Ryan hires an international assassin to literally rip the Redman family apart, a series of events that can't be stopped catapults them all through a fast-paced, hard-edged thriller in which nobody is safe.

Secrets are revealed. Sex lives are exposed. The Mafia get involved. And George's two daughters, Celina and Leana Redman, come to the forefront. More than anyone, it's they who are caught in the throes of their father's past as Louis Ryan's blind desire to kill them all takes surprising turns in his all-out effort to see them dead.

RUNNING OF THE BULLS:

TWELVE PEOPLE TARGETED FOR DEATH...
Five years ago, each person sold out to the SEC and took the stand against Maxmilian Wolfhagen, a man who robbed the world of billions. Now, with Wolfhagen out of prison, each is dying a grisly death.

TWO ASSASSINS WITH ONLY 48 HOURS TO CUT A SWATH OF MURDER AND REVENGE THROUGH NEW YORK...
Time is tight and the challenges are massive--but so are their ruthless skills.

MARTY SPELLMAN IS ON THE CASE...
Hired to investigate Wolfhagen, private investigator Marty Spellman soon learns that all isn't what it seems as the twists pile up along with sheer number of the dead. His life is put on the line. His family is threatened. No one is who they appear to be. Who can he trust as the bulls of Wall Street start to run as the two assassins fully ignite their killing spree?

FROM MANHATTAN WITH LOVE:

An international assassin questions her sanity when she falls in love with the very assassin she’s charged to assassinate.

What happens when each collide? Chaos. Murder. Love. Revenge.

In this taut, 35,000-word novella, which is a prequel to the upcoming third novel in the Fifth Avenue series, “Park Avenue,” both women come together for the first time in an explosive story that threatens each of their lives, particularly when one woman breaks her own rules and dares to fall in love.

In “From Manhattan with Love,” she soon learns what she always feared. When it comes to real danger, there’s nothing more dangerous than love itself.

"Fifth Avenue, the first novel by penned Christopher Smith, is a fantastic first effort and was the reason I was simply unable to put my Kindle down over this Christmas period. And I would go as far to say that it ranks as one of the best first novels I’ve ever read."--PLANET KINDLE

"Fifth Avenue. A big, big novel. A blockbuster? Yes. A bestseller. It should be. The author, at the beginning of the novel, thanks the people who introduced him to the 'real' Fifth Avenue. I suspect the real one could not be as interesting or engrossing as this novel. ...This is a highly recommended novel. It deserves the five stars." --P.M. RICHTER

Running of the Bulls

From Manhattan with Love

Fifth Avenue (Book One in the Five Avenue Series)

Running of the Bulls (Book Two in the Fifth Avenue Series)

From Manhattan with Love (Novella Three in the Fifth Avenue Series) 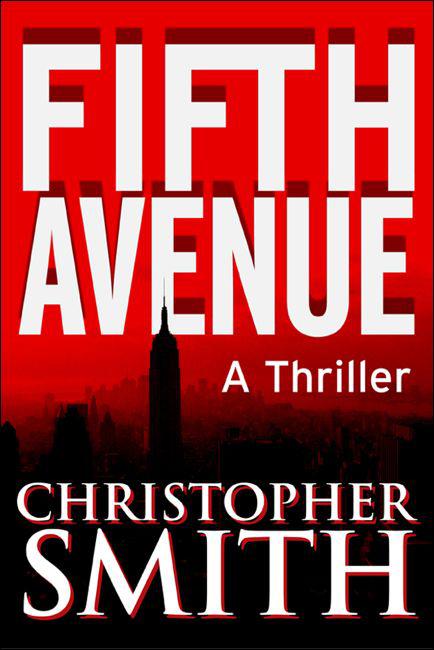 For my father, Ross Smith, for always pushing and never giving up.

For my mother, Ann Smith, for her enthusiastic support.

And for Constance Hunting, who edited this book over the course of many years but who didn’t live to see its publication.

This is our book.

I thank you and I miss you.

Any trademarks, service marks, product names or named features are assumed to be the property of their respective owners, and are used only for reference. There is no implied endorsement if we use one of these terms.

No part of this book may be reproduced in any form by any electronic or mechanical means (including photocopying, recording, or information storage and retrieval) without permission in writing from the author.

For all permissions, please contact the author at:
mailto:[email protected]

Any similarity to persons living or dead (unless explicitly noted) is merely coincidental.
Copyright © 2010 Christopher Smith.

For their help with this book, the author is particularly grateful to Erich Kaiser and Sanford Phippen; to Roslyn Targ; to Ted Adams; to Deborah Rogers, Paul Ersing and Faith Benedetti; and to those men and women who introduced the author to the real Fifth Avenue while he researched this book; and to friends old and new, all of whom either helped to shape this book or who offered support as it was written.

The bombs, placed high above Fifth Avenue on the roof of The Redman International Building, would explode in five minutes.

Now, with its mirrored walls of glass reflecting Fifth Avenue’s thick, late-morning traffic, the building itself seemed alive with movement.

On scaffolding at the building’s middle, men and women were hanging the enormous red velvet ribbon that would soon cover sixteen of Redman International’s seventy-nine stories.

High above on the roof, a lighting crew was moving ten spotlights into position.

And inside, fifty skilled decorators were turning the lobby into a festive ballroom.