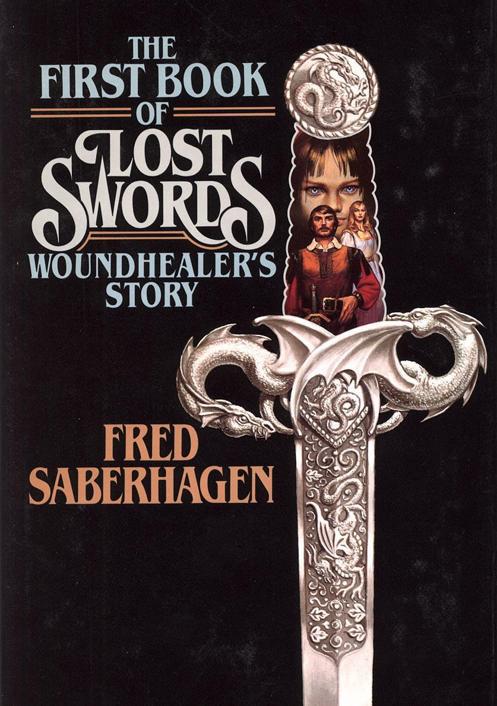 This is a work of fiction. All the characters and events portrayed in this book are fictitious, and any resemblance to real people or events is purely coincidental

Empire of the East series

The Book of Swords

The First Book of Swords

The Second Book of Swords

The Third Book of Swords

The Book of Lost Swords

The Sixth Book of Lost Swords:

An Armory of Swords

As are all the others,

whether labeled so or not.

Here in the green half-darkness an endless melody of water ran, a soft flow that played lightly and moodily over rock. The surrounding walls of dark rock oozed water like the Earth’s blood, three clear rivulets that worked to fill a black pool no bigger than a royal bath.

At the single outlet of the pool a stream was born, to gurgle from the vessel of its birth across a rocky floor toward the distant sunlight. What little light inhabited the cave, a dim, tunneled, gray-green, water-dappled illumination, came in through the small air space above the tumbling surface of the small out flowing stream.

Now multiple moving shadows were entering from the sunlight, distorting the gray-green light within the cave. Bold, purposeful splashings altered the endless murmur of the water. Rocks in the streambed were kicked and tossed aside, with hollow echoing sounds. The voices of children, pitched to quiet excitement, entered the cave too.

There were three of the visitors. Two of them, a girl and boy in their middle teens, were sturdy waders who supported and guided between them a smaller and much more fragile-looking figure. All three had rolled their trousers above their knees for wading; a useless precaution, for all three were dripping wet from feet to hair. It had been necessary to crawl, half in the cold splashing flow of water, to get in under the low rock at the very entrance.

“We’re in a cave now, Adrian,” the girl announced with enthusiasm, bending over her small charge. She was perhaps fourteen, her brown hair hanging over her face in long, damp ringlets. Her face was attractive in its youth and health, though it gave no promise of ever being known for its great beauty.

The little boy to whom she spoke said nothing. He was no more than seven years old, with long, fair hair falling damply around a thin, sharp-featured face. His mouth was open just now, and working slightly, the lips rounded by some inner tension into a silent cry. His eyes, remarkably wide and blue, were sightless but active, sending their blind gaze wavering across the rough and shadowed ceiling of the cave.

Now he pulled free his right hand, which the older boy had been holding, and used it to grope in the empty air in front of him.

“A cave, Adrian.” The sturdy youth, in a voice that was just starting to deepen, repeated what the girl had said. Then, when the child did not respond, he shrugged his shoulders slightly. He was somewhat bigger than the girl and looked a little older. His hair was of the same medium brown as hers and showed something of the same tendency to curl; and his face resembled hers enough that no one had trouble in taking them for brother and sister.

The girl was carrying three pairs of shoes tied at her belt. All three of the children were plainly dressed in rough shirts and trousers. Here and there, at throat or wrist, an ornament of gold or amber indicated that the choice of plain clothing had not been dictated by poverty.

The explorers had all waded out of the ankle-deep stream now and were standing on the flat sandy floor of the cave. The girl halted after a couple of steps on dry sand, studying the surprisingly large room around her. She frowned into the dark shadows ahead, from whence the sounds of running water had their deepest origin.

She asked: “Zoltan, is this place safe?”

Her brother frowned into the deeper shadows too. Self-consciously he felt for the dagger sheathed at his belt. Then he dropped into a crouch, the better to scan the cave floor in the half light.

“No droppings,” he muttered. “No gnawed bones. I don’t even see any tracks.” He brushed his strong, square fingers at sand and rock. “Ought to be safe. I don’t think that anything large can be living in here. Besides, the wizards checked out this whole area this morning.”

“Then we can hide in here.” The girl’s voice returned to the conspiratorial tones of gaming, and she stroked the small child’s hair protectively, encouragingly. “We’ll hide in here, Adrian; and Stephen and Beth will never find us.”

Adrian displayed no interest in the question of whether they would ever be found or not. “Elinor,” he said, in a high, clear voice. The name sounded as if he were pronouncing it very thoughtfully and carefully. At the same time he reached his groping hand toward the girl and touched her clothing.

“Yes, it’s me. I’ve been with you all the morning, remember? So has Zoltan.” She spoke patiently and encouragingly, as if to a child much younger than seven.

Now Adrian seemed to be giving her last statement his deepest thought. He had turned his head a little on one side. His round mouth worked, his blind eyes flickered.

Zoltan, standing by with folded arms and watching, shook his head. “I don’t think he even understands we’re playing hide-and-seek,” he remarked sadly. In relation to his young cousin, the Prince Zoltan stood more in the role of companion and bodyguard than that of playmate, though at fifteen he was not too old to slide from one character to the other as conditions seemed to require.

“I think he does,” Elinor said reproachfully. “Something’s bothering him, though.”

“Hush. He can understand what you’re saying.” Kneeling in dry sand, she patted the cheek of their young charge soothingly. The Princeling slowly patted her hand in return.

Elinor persisted with her cheerful encouragement. “Beth and Stephen are ‘it’ this turn, Adrian, remember? But we’ve got a great place to hide now. They’re never going to be able to find us, here in a cave. Can you tell we’re in a cave, by the way things sound? I bet there are a lot of blind people who could do that. Isn’t it fun, playing hide-and-seek?”

The small boy turned his head this way and that. Now it was as if he were tired of listening to Elinor, thought her brother, who couldn’t blame him if he were.

The girl was pleased. “That’s right, we had to wade through the water to get in here. I was afraid the rocks would bother your feet, but I guess they didn’t. Now you’re out of the water, you’re sitting on a dry rock.” She raised her head. “Zolty, will we be able to hear Beth calling if they decide they want to give up?”

“Dunno,” her brother answered abstractedly. He had turned his back on the others and was facing the cave’s single entrance, his eyes and ears intently focused in that direction. “I thought I heard something,” he added.

“No. Not a voice. More like a riding-beast. Something with hooves, anyway, clopping around out there in the stream.”

“Probably some of the soldiers,” Elinor offered. There had been a small patrol sent out from High Manor, in advance of the children’s outing. Not that the adults of the royal family, as far as she knew, were particularly worried about anything. It had been purely a routine precaution.

“No.” Her brother shook his head. “They’re supposed to be patrolling a kind of perimeter. They wouldn’t be riding through here now. Unless…”

Zoltan, without taking his eyes off the entrance, made an abrupt silencing motion with his hand.

His sister was not going to let him get away with becoming dramatic. She began to speak, then broke the words off with a hushed cry: “Adrian!”

The child’s eyes were only half open, and only the whites of them were showing. A faint gasping noise came from his throat. He had been sitting bolt upright where Elinor had placed him, but now his thin body was starting to topple slowly from the rock.

Zoltan turned to see his sister catch the child and lower him into the soft sand. But then just as quickly he turned back the other way. Something was now outside the cave that could shadow the whole entrance. The darkness within had deepened suddenly and evenly.

Elinor was curled on the sand, lying there beside the child, and when Zoltan took another quick glance at her he could see that she was frightened. Adrian was starting to have a real seizure, what looked to Zoltan like a bad one. The Princeling’s little body was stiffening, then bending, then straightening out again. Elinor had stuffed a handkerchief into his mouth to keep him from biting his tongue—her eyes looking back at her brother were full of fear. Not of the fit; she had seen and dealt with those before. The nameless presence outside the cave was something else again.

Then suddenly the shadow outside was gone.

Only a cloud shadow? As far as Zoltan’s eyes alone could tell, it might have been nothing more than that. But he didn’t think so. He waited. Something…

ROMULUS (The Innerworld Affairs Series, Book 1) by Marilyn Campbell
About the Night by Anat Talshir
Regarding the Pain of Others by Susan Sontag
The Saint Who Stole My Heart: A Regency Rogues Novel by Stefanie Sloane
Aced by Ella Frank, Brooke Blaine
The Kill Zone by David Hagberg
Spain by Jan Morris
Rainey Royal by Dylan Landis
Nobody's Prize by Esther Friesner
Shadow Hunt by Erin Kellison