Read The First Hostage: A J. B. Collins Novel Online

The First Hostage: A J. B. Collins Novel 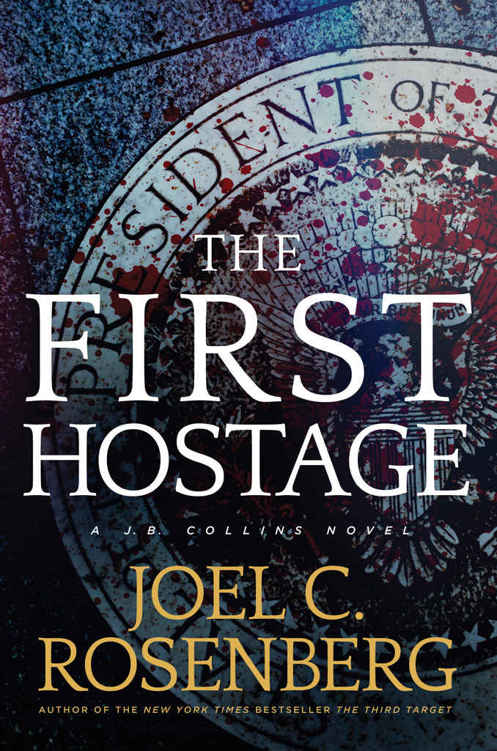 “His penetrating knowledge of all things Mideastern

—coupled with his intuitive knack for high-stakes intrigue

“If there were a Forbes 400 list of great current novelists, Joel Rosenberg would be among the top ten. . . . One of the most entertaining and intriguing authors of international political thrillers in the country. . . . His novels are un-put-downable.”

“One of my favorite things: An incredible thriller

—it’s called
The Third Target
by Joel C. Rosenberg. . . . He’s amazing. . . . He writes the greatest thrillers set in the Middle East, with so much knowledge of that part of the world. . . . Fabulous! I’ve read every book he’s ever written!”

“Fascinating and compelling . . . way too close to reality for a novel.”

“[Joel Rosenberg] understands the grave dangers posed by Iran and Syria, and he’s been a bold and courageous voice for true peace and security in the Middle East.”

“Joel has a particularly clear understanding of what is going on in today’s Iran and Syria and the grave threat these two countries pose to the rest of the world.”

Former CIA operative in Iran and bestselling author of
A Time to Betray: The Astonishing Double Life of a CIA Agent Inside the Revolutionary Guards of Iran

“Joel Rosenberg is unsurpassed as the writer of fiction thrillers! Sometimes I have to remind myself to breathe as I read one of his novels because I find myself holding my breath in suspense as I turn the pages.”

“Joel paints an eerie, terrifying, page-turning picture of a worst-case scenario coming to pass. You have to read [
Damascus Countdown
], and then pray it never happens.”

The First Hostage: A J. B. Collins Novel

The First Hostage
is a work of fiction. Where real people, events, establishments, organizations, or locales appear, they are used fictitiously. All other elements of the novel are drawn from the author’s imagination.

To our son Jacob, a brave and steady soul in dark and troubled times.

“Blessed is the man who fears the
L
ORD
, who greatly delights in His commandments. . . . He will not fear evil tidings; his heart is steadfast.”

—president of the United States

—vice president of the United States

—director of the Central Intelligence Agency

—former director of the CIA

—special agent with the Federal Bureau of Investigation

—the monarch of the Hashemite Kingdom of Jordan

—uncle of the king of Jordan and a senior advisor

—lieutenant general, head of the army

—colonel and senior advisor to and chief spokesman for the king

—chief of security for the Royal Court

—leader of the Islamic State in Iraq and al-Sham (ISIS)

—deputy director of the Mossad

—president of the Palestinian Authority

Need by Joelle Charbonneau
The Glitter Scene by Monika Fagerholm
A Gladiator Dies Only Once by Steven Saylor
The Eye of Zoltar by Jasper Fforde
Socket 1 - The Discovery of Socket Greeny by Bertauski, Tony
After the Rain (The Twisted Fate Series Book 1) by Unknown
Captivated: Return to Earth by Ashlynn Monroe
Octopussy by Ian Fleming
Space Eater by David Langford
The Protector by Dawn Marie Snyder