PSST! HEY, YOU! YEAH, THE ONE READING
THIS.

LIKE FREE STUFF? HOW ABOUT A COMPACT UNIVERSE
STORY ABSOLUTELY FREE? 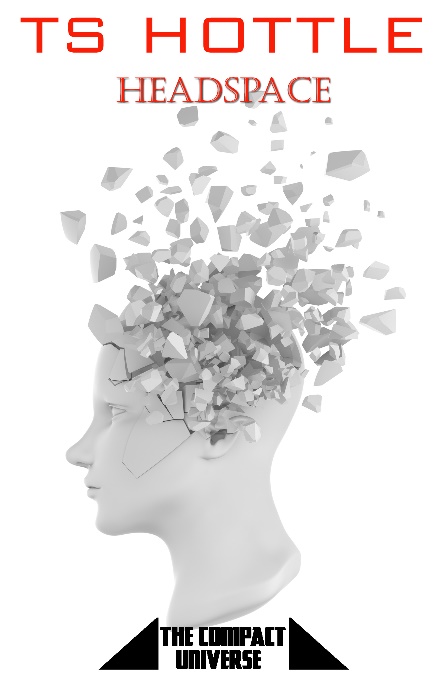 “HEADSPACE” IS THE TALE OF RAFE, WHO VIOLATES
HUMANITY’S LONG-STANDING TABOO AGAINST “SMART” ARTIFICIAL
INTELLIGENCE. TERRORISTS COULD USE THIS TO BRING DOWN THE COMPACT.
THE GOVERNMENT CAN USE THIS AS A WEAPON. RAFE USES IT TO IMPRESS A
GIRL.

“HEADSPACE” CAN BE YOURS FOR FREE. ALL YOU
NEED TO DO IS SUBSCRIBE TO THE COMPACT UNIVERSE NEWSLETTER. SIGN UP
HERE AT
http://eepurl.com/bn4Gm9

SIGN UP TODAY AND FIND OUT THE LATEST NEWS OF
THE COMPACT UNIVERSE!

For TJ and Shoes, Mitch and Jim, Fig and
Ripley, for all the imaginary crew that used to inhabit our heads,
this book can be dedicated to one person and one person only…

To my former Bay Area partner in crime, now
tearing it up in the Windy City…

To Kitty. This is what we should have been
writing all along.

It’s hard to riot in the rain, but life on
Essenar afforded no other choice. It always rained on Essenar.
Someone
somewhere
thought it would make the perfect penal
colony. And it might have, if floods had not destroyed the two
largest food processing centers on the planet.

For Lattus Kai, the riots proved a nightmare.
When they reached the capital, he found himself suiting up in his
flabby-looking armor and grabbing the sword he took out only for
friendly matches and ceremonial functions. Not that there had been
much ceremony on this forsaken rock.

“You can’t go out there,” said Tishla, Kai’s
indentured companion. Her white hair cascaded across her shoulders
and seemed to shimmer, even in the armory’s dim lighting. “They’ll
kill you.”

Kai touched small polymer strips on various
parts of his armor, causing it to shrink to his body and harden. It
now resembled a man-shaped shell. “In the event of my death, my
dear, your contract of indenture passes to you, along with the
funding to manage it. You’ll be your own master, then a wealthy
Free Woman.”

Unable to punch Kai through the armor, she
gave him a hard shove instead. “I’m not worried about me, you
idiot. I’m worried about you.”

Around him, his personal guards all reached
for their swords but stopped at drawing them. One went for his
shock pistol instead. Kai could only smile back at her before
triggering his helmet to expand over his head. “One should never
worry about whether one’s master is going to die, especially a
woman like you. You deserve your freedom, Tish.”

“I deserve you.” She patted the side of his
helmet, a move which did not provoke the guards this time. “Be
safe.” She kissed him before the visor descended over his face.

Kai and his personal guards plunged into the
melee outside the palace gates. With all the mud and water damage,
their boots had trouble gaining traction over the broken pavement.
A company of Realm troops held the attacking crowd at bay while
several soldiers moved tracked vehicles into place, large dish-like
objects mounted high atop their roofs. The dishes looked relatively
harmless, like the old-fashioned space antennae once used to listen
to faint, distant signals. Kai, however, knew differently.

Palak, the captain of the Governor’s Guard,
rushed over to Kai and saluted. A dark orange bruise marred the
otherwise gray skin around his left eye. “No need for you to come
out, Sire. Someone gave them projectile weapons.” He gave a sly
glance at the nearest tracker and its dish. “You know the old
saying.”

Kai remembered it from his time in the
Realm’s service. “Woe to the man who brings a gun to a knife
fight.”

It did not surprise Kai that Palak already
sported a bruise from the melee. The old warrior was never one to
run from a fight. To this day, he still shaved his head to sport
the scars around his smooth gray scalp as badges of honor.

Kai touched the side of his own helmet to
retract it back into the armor. “Fire two bolts over their heads
first. Just to get their attention. I want to talk to them.”

“Then we incinerate the ones in the back and
cut down anyone left who won’t surrender. Do it.”

The captain crossed his hands over his chest
and bowed to Kai. Turning back to the line of where the trackers,
he shouted orders for two of the crews to fire.

A pair of the mounted dishes began glowing
blue, then red. Both shot bright red beams over the heads of the
rioters, one striking a storage shack on a rocky hill overlooking
the outer grounds of the Governor’s Palace and turning into an
incinerated pile of rubble. The crowd quieted and looked up at the
weapons.

“Bring me a thunder phone,” said Kai as he
strode toward another tracker. He climbed atop it with the weapon
operator. Someone handed up a small box. It resembled an ancient
handheld computer, but half of it was taken up by an odd-looking
grid Kai knew to be the microphone. His father once told him they
originally called these devices the Voice of God, back when such
imagery was common.

As Kai looked out over the mob of hungry
people he would likely have to kill in a few moments, he didn’t see
evidence of any god. He thumbed the thunder phone and held it up to
his mouth.

“People, I am Lattus Kai, your Governor. I
personally appeal to you to lay down your arms. You will not be
harmed if you do. You cannot, and will not, be held responsible for
the starvation that has brought this upon us all.”

“What do you mean all?” a woman shouted back,
her coppery orange hair streaked with white. “We know you import
real
food from the Throneworld and the other colonies.”

That sent a ripple of shouting throughout the
crowd.

Kai put up his hand. “People, please. It is
true the Realm supplies its governors well. It is also true the
Realm does not fully understand the plight of its people on the
newer colonies.”

“I’ll say,” said a man from a different part
of the crowd. “We can’t eat anything native without it being
processed.”

“Bring us food,” another person shouted,
followed by more demands for food. Eventually, this crescendoed
into a chant of “Food! Food! Food!”

“I understand your anger,” said Kai. “But if
I were to release my stores, only a dozen or so of you will be fed.
For a day. I promise you, we are working very hard to get the food
plants back online as soon as possible. In the meantime, I
will…”

The bullet clanged off the dish behind him, a
piece of shrapnel from it slicing his cheek. As Kai clambered down
from his perch, he caught Palak’s eye and nodded. All three dishes
aimed downward and fired three beams into the back of the crowd.
Several dozen people screamed, flared brightly, and collapsed into
heaps of ash. The rain quickly dissolved the remains into greasy
runoff.

“For the last time,” the captain said over
his own thunder phone, “stand down or we will shoot to kill. Those
of you closest to the gate will meet our swords.”

“Come on, Sire,” said Palak. “Let’s get your
helmet back on. You’ve already lost them.”

Kai barely had time to comply before the
crowd charged the gates. The dish weapons began firing
indiscriminately, but they did nothing to stop the bullets from
firing in return. Kai and his guards plunged into the fray, swords
drawn. They went for the gun hands of those carrying small hand
weapons. Most of the rioters wore no armor at all, only a few
attired in some primitive protection in an attempt to foil Realm
and Palace Guard swords. The result was many arms severed almost to
the elbow.

And still, Kai noted as he gutted an
attacker, they kept coming. They had no choice. Death by violence
would be quicker and less painful than death by slow starvation.
With no food, they had to fight.

A fight that held no honor for Kai. He and
his people sported nanite-laced polymer armor that covered them
from head to toe. The most the bullets could do was make loud
cracks
as they impacted. The rioters never stood a chance,
not between the titanium blades of the guards and the mounted
energy weapons. They soon began to surrender.

“Put them in Valkay Prison,” said Kai to the
guard captain. “Let them at least have penal rations.”

“Sire,” said his personal chief. “One
prisoner is insistent that he talk to you. He says he’ll surrender
only to the Governor himself.”

“Everyone here would like to talk to the
Governor. Do you think I really have the time?”

His hair was almost black, not the usual
yellow, white, or light brown. His only facial hair was a thin
black mustache, no beard. He had the palest skin Kai had ever seen
on a primate, almost white, though with a hint of brown, tinges of
pink suggesting red blood beneath. Some of Kai’s people were
albino. This one’s skin was nearly as pale as those. And those
eyes. Most primates had white corneas, but the pale blue irises of
this alien were somewhat frightening. Even more unsettling was his
nose, a tiny little bulb between his eyes and his upper lip. Kai
looked at it and absently ran a finger across his own flat
nose.

“He’s Tianese,” said Tishla. She and Kai
watched the alien from a small room off the Palace’s holding
facility. On a small screen, the alien sat passively with his hands
folded, occasionally studying his surroundings. For someone who had
just survived a slaughter, he seemed unusually calm. “Primate like
us, five fingers, standard anatomical layout. Though where they
keep their genitals bothers me.”

That made Kai laugh. “Well, among primate
species, we are the odd ones.”

“How did he get here? And why would an alien,
any
alien, want to visit a world populated by transported
criminals and their families? The Realm has plenty of established
worlds. Even the Throneworld is open to foreigners.”

“Oh, I think he chose us for a reason.”
Tishla reached into the folds of her gown and produced an ugly
object, long, brown, and lumpy. It had a rough surface with little
plant-like buds growing out of it. “You know the story of Jod and
the Giant?”

Every child knew the tale. Jod traded the
family
sloret
, the only source of meat and milk they had,
for a root a mysterious man promised would feed them for a year.
Enraged, Jod’s father skinned the root and fed everyone but Jod
with it. The skins, tossed into the ground outside, had grown over
night into a lush garden filled with every imaginable fruit and
vegetable, enough to feed the entire village.