The Five Faces (The Markhat Files) 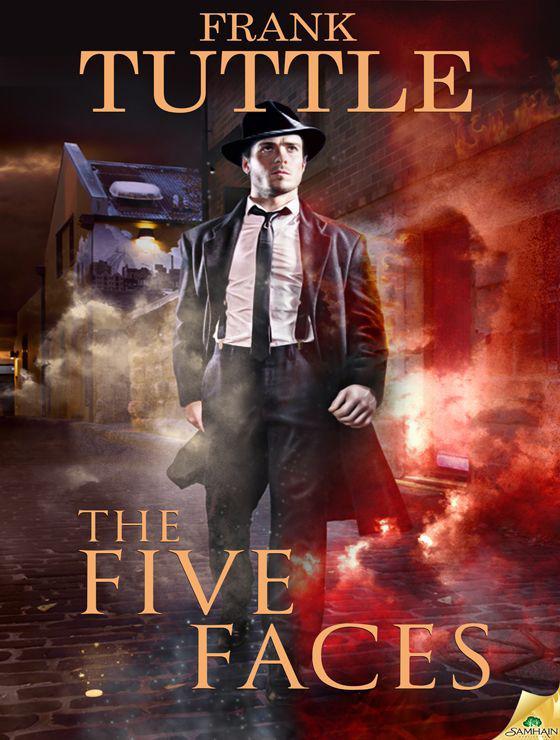 I dedicate this book to the Cambrit Street Irregulars, whose tireless efforts and gleeful camaraderie made this a better book. Stephon, Kellie, Fanny, Maria, Elyse, and Jwb52z, Markhat doffs his hat in thanks!

I’d also like to thank my editor Holly and all the wonderful people at Samhain Publishing for their unflagging professionalism and support.

To cover artist extraordinaire Kanaxa, thank you for another brilliant cover!

Finally, my sincere thanks to all irrational numbers greater than or equal to Pi.

The old folks gather in the park, come sundown on All Sorrows Day, to watch the blackbirds choose roosting trees on Remembrance Hill. If the birds pick the five towering blood oaks on the hill’s north side, ancient lore and common wisdom claims Rannit will see another six weeks of winter.

If the blackbirds wind up roosting on the south side, assert folklorists, summer will arrive six weeks early.

I once asked Mama Hog, who holds folklore as gospel, what was portended if the birds lit on both sides of Remembrance Hill equally? What if they skipped Remembrance altogether in favor of some newer, upscale hill closer to the shops and Rannit’s vibrant downtown arts community?

I’d gotten as a reply a long lecture on respecting the wisdom of my elders and showing some reverence for the mysterious grandeur of nature.

I’ve never shared Mama’s fascination with so-called natural portends. Even though I was part of the crowd gathering at the foot of Remembrance Hill at dusk on All Sorrows Day, I had absolutely no interest in the meteorological prognostications of the vast flock of blackbirds wheeling away overhead.

No. Summer could go early or stay late or marry winter’s second cousin and move in with fall for all I cared. I had my eyes on a man named Hurry-Up Pete, and he’d spent the afternoon watching those fool blackbirds circle the Hill. Hurry-Up Pete brought a chair, a bag of peanuts, and a bottle of cheap, Old Guard wine. Damned if he wasn’t pointing up at the noisy caucus of blackbirds and narrating their back-and-forth flight while offering his own prediction as to where they might be roosting.

I took my time, sidling up closer to him. I was sure Hurry-Up Pete didn’t know me. I was certain he had no idea a finder named Markhat spent the last three weeks ferreting him out.

I was also sure Hurry-Up Pete had killed at least two men recently. The deaths had been brutal. Unnecessary. One man had bumped into Hurry-Up on a busy street. The other refused to relinquish a bench at a cab-stand. Both bodies were both so savaged neither man’s family was entirely sure they buried their own.

And here was Hurry-Up, eating peanuts and drinking wine and chatting merrily with strangers about blackbirds and early summers.

Hurry-Up’s most recent victims hadn’t seen death at his hands approaching, so I minded my step. Watched my back. I milled and wandered like everyone else, but I always kept that squat, loud man well in sight.

Hurry-Up was known to many. Feared by most. Loved by no one I could discover.

I didn’t ask what the bereaved parents who had hired me intended to do with Hurry-Up after I found him. Turn him over to the City Watch? Maybe. We all knew what little good that would do—Hurry-Up was the nephew of a Hill judge. He’d gotten away with murder all his life.

But as I watched him laugh and point and fling peanuts on the Regent’s grass, and I remembered the grim determination in the eyes of the bereaved, I had an idea Hurry-Up Pete had gotten away with murder for the very last time.

The coins in my pocket—an advance on my final fee—hung heavy, like lead.

The blackbirds overheard flapped and flew, the flock so numerous the beating of their wings sounded like a hundred thousand ghostly, anxious whispers.

The flock’s shadow crossed over me. That was when I saw the little girl.

She was spindly and clumsy and she needed a comb. She was ten, maybe twelve—I’m no good at telling ages between toddlers and spinsterhood.

Her clothes were fitted and clean and neat, but had that threadbare look that comes from years of careful, frequent washing. She was missing her right shoe. She had dirt on her elbows and I’d no sooner seen her than she walked right into the knees of a man going somewhere in a hurry.

He bowled her over and kept going. She got to her knees, crying, and damned if she didn’t stand and then run headlong right for Hurry-Up Pete’s bird-watching chair.

She made four steps before running into another man. This time, the man stopped and bent down, but she scampered off, howling, into a fourth, hard tangle with an adult’s legs.

I got there in time to pick her up. She turned her face toward me when I spoke, and when I saw her cloudy white eyes I knew I’d been right.

She was blind. Milk Eyes, they call it. Hits kids as a fever. If they live, they lose their vision.

I hung on to her, though she tried to slap my hand away.

“Ease up, sister,” I said. I moved so my backside faced Hurry-Up, who was so close I could have tossed him a big bag of bricks. “What’s the rush? Are you lost? Where’s your mother?”

I got a diminutive fist laid across the bridge of my aquiline nose for my troubles. The blow stung but did no serious damage, although the circle of onlookers chuckled.

She turned her milk-white eyes toward me.

Her last cry was banshee-loud. Tears streamed down her face. For the first time, I noticed the bit of twine she clung to with her left hand.

It had been cut clean six inches below her fingers.

“Somebody took your dog?”

She whimpered and held her hands about a foot and a half apart and I bit my tongue, realizing I’d just asked a panicked, blind kid to describe a dog she’d never seen.

“Please help me find him, mister,” she said. Then she leaped up and wrapped her too-skinny arms around my neck and started blubbering all over my lapels. “Please find Cornbread.”

I turned, picking her up as I did so. Hurry-Up Pete was still pointing and shouting at the gathering flock of blackbirds.

“Let’s go find Cornbread, honey,” I said. I thought about patting her head but dismissed the idea, as my head-patting skills hadn’t seen much practice.

Hurry-Up bellowed and tossed his empty wine bottle into the crowd.

That’s the thing about vengeance.

It can always wait a day or three.

Even when someone pays dear for it.

My new client’s name was Saffy, short for Saffron, and her big brother’s name was Ted, short for Ted. They were hesitant to offer up their surname, as most Orthodox Rannites are, so I didn’t push.

Saffy and Ted lived in an attic flat with their grandparents in the jumble of old alleys that run north of Camptown. Put them together and they’d still be outweighed by a sack of moth-wings, which is why I left them in my office and fetched Mama Hog.

Mama has her faults—and then some—but put a hungry child in her vicinity and she’s a one-woman charity kitchen. She took a single look at Saffy and Ted and vanished with a squawk, only to reappear moments later with a basket stuffed with biscuits and big thick slices of salted ham.

She left after delivering her feast, and by the time my new clients and I got down to business, I could smell Mama’s soup-pot boil as she brewed up something hot and savory.

Ted choked down the last bite of his fourth biscuit and wiped his chin on his sleeve.

“Mister, I’m much obliged for the biscuits, but I’m telling you straight—right now—we ain’t got a penny between us.”

Saffy nodded. No slouch—she was on biscuit five, herself.

“I don’t know much about finders,” added Ted, “but I know nobody does nothin’ for free. So tell me this—why did you tell Saffy you would find Cornbread? We got no coin. And you ain’t havin’ nothing else, neither, if you get my point.”

He returned my curt nod.

“Know them and like them. Cornbread—he help your sister get around?”

“I don’t need any damned help, mister,” said Saffy through a mouthful of biscuit.

Ted nodded silently. “Cornbread’s the smartest dog I’ve ever seen,” he said. “We raised him from a pup. He’s been with Saffy all his life, and she’s been with him all hers. We want him back, mister. But I can’t pay you. Not right now, anyways.”

I leaned back in my chair and pretended to ponder the matter. “Tell you what,” I said. “I’ve got a house on Middling Lane. Summer’s coming. My wife likes a neat lawn, and I like a lazy afternoon and a cold beer. What do you say to this—I try to find Cornbread. You give me a summer of yard work as payment if I find him. If I don’t, you still work for me for two months.”

Ted eyed me with mild suspicion. “That’s it? No funny stuff?”

“That’s it. No funny stuff. Meals thrown in by Mama Hog. Deal?”

Saffy grabbed his elbow, whispered something in his ear.

“She wants to know if you’re any good,” he said, giving me that same flat, hard look. “Like I said, I don’t know anything about finders. So, are you? Any good?”

I opened my desk drawer and got out my writing pad and my good ink pen.

“I guess we’ll see. So tell me. What happened today at the Park?”

Saffy swallowed and coughed. “A man came up and asked me what kind of doggie I had. I heard him get on his knees, and I thought he meant to pet Cornbread, but the leash jerked and Cornbread barked and the man took him—”

I spoke before she could start crying again.

“The man. Did you know his voice?”

She knotted her dirty brow in concentration.

“What keend of a doogie is that, lass?”
she said, aping a deep baritone and a thick accent I couldn’t place. “
What a wee leetle doogie he is!”

“Just like that.” She hesitated. “He smelled funny. Perfumy, like a fancy lady. And he had a big hat.”

I raised an eyebrow. Blind she might be, but she sensed my unspoken question somehow.

“His shadow was too big. I could feel it when he blocked out the sun. He had a big hat, mister.”

He didn’t blink or look away. “I was watching the birds,” he said. As he spoke, he made a rapid reach and grab motion with his hands. “I lost sight of Saffy, just for a minute.”

Pickpocket,
I added to my list.
Mind your coin.

When I didn’t spill the beans to Saffy, Ted actually showed me a brief, narrow smile.

“So you never saw the man who took Cornbread?”

I didn’t doubt that for a moment. Life doesn’t breed any gentle children of leisure in Camptown.

Mama Hog pounded at my door. “Boy,” she shouted. “Let me in. Got some stew I needs to get rid of.”

I rose and let her in. Her basket was full of bowls and spoons and a pot with a lid and half a loaf of hard-crust bread.

“Reckon you young-uns got room for a bite of stew?”