Read The Flight of Swallows Online

The Flight of Swallows 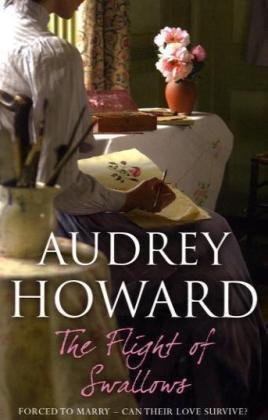 A Day Will Come

All the Dear Faces

There Is No Parting

Echo of Another Time

The Silence of Strangers

A World of Difference

Not a Bird Will Sing

Beyond the Shining Water

Rivers of the Heart

The Seasons Will Pass

Whispers on the Water

A Flower in Season

Reflections from the Past

First published in Great Britain in 2009 by Hodder and Stoughton

The right of Audrey Howard to be identified as the Author of the Work has been asserted by her in accordance with the Copyright, Designs and Patents Act 1988

No part of this publication may be reproduced, stored in a retrieval system, or transmitted, in any form or by any means without prior written permission of the publisher, nor be otherwise circulated in any form of binding or cover other than that in which it is published and without a similar condition being imposed on the subsequent purchaser.

All characters in this publication are fictitious and any resemblance to real persons, living or dead is purely coincidental

She could hear James wailing as she waited her turn outside the door to her father’s study and beside her Robbie began to whimper in anticipation. Her other three brothers had run past one by one, heading for the wide staircase where Kizzie waited to comfort them. She held Robbie’s hand, doing her best to assuage his fear; after all, Robbie was only six years old and inclined to be timid. Who could blame him?

At last the study door opened and James, seven years old, a year older than Robbie, scuttled into the passage, holding his hand to his behind. His pale cheeks were wet and he cast an agonised glance at his sister.

‘James . . .’ Charlotte whispered, doing her best to convey her sympathy, but the boy did not answer, speeding as fast as he could towards the foot of the stairs. He had left the study door open and a male voice sounded from within.

‘Come in, Robert,’ the voice ordered and Robbie’s whimper grew louder, turning to cries of blind terror. He clutched at Charlotte’s skirt, unable to move. ‘And be quick about it, child. I am a busy man and have no time to waste.’

She remembered last summer when they had been waiting in just such a situation as this. There had been a butterfly against the window at the end of the passage that looked out on to the garden at the side of the house. It had been beating its wings frantically against the glass, such lovely colours of smoky brown, flame and pale grey, the flame and grey spotted with white. It had been trying to escape and she had known exactly how it felt but there had been no escape. For her or the butterfly! And today was the same.

‘Go on, darling,’ she whispered encouragingly to her little brother. ‘It will soon be over.’

Charlotte Drummond hesitated, then, the child’s terror bolstering her own courage though she was sadly aware that it would make no difference to what was about to happen, she stepped bravely into her father’s study, her small brother cowering beside her.

Arthur Drummond stood, feet planted apart, on the rug before the good fire, his back to the arched fireplace with its cast-iron fire basket and fire-back and pretty tiles on either side. Above it was a large mirror which reflected the back of Arthur Drummond’s sleek head and the snug room that was exclusively the master’s domain. Though it was the beginning of the century and new styles were rapidly encroaching in most upper-class homes the Drummond household was not one of them. The house had been in the family for generations, but not until Arthur had married the daughter of a wealthy coal owner had it been modernised to the Victorian fashion which still prevailed. The room was dominated by an enormous leather-topped desk on which stood a heavy silver inkstand, an ornate well-polished brass and frosted glass lamp, a silver cigar box and a photograph of a very pretty lady in a silver frame: the children’s dead mother. Beside the desk was a side table well furnished with decanters and glasses. A globe atlas was set in a brass meridian ring on a stand and on the walls hung prints of hunting scenes, horses and dogs. There were two deep and comfortable leather armchairs, books lined three walls from floor to ceiling and a cheerful carpet of reds and blues covered the floor. Most of his wife’s money had been gambled away but the comfort remained.

In his right hand Arthur Drummond held a thin, whippy cane with which he casually slapped his right, booted leg. He wore riding boots and pale buff breeches with a well-cut, three-buttoned, cutaway black frock-coat, for he was about to mount his expensive, well-bred horse and join the meet at King’s Meadow, the home of one of his many acquaintances. His silk top hat waited on the desk. He was tall, handsome, lean, with hair the colour of the glossy brown conkers with which his sons played furious duels. His eyes were the same shade but where his hair gleamed in the firelight his eyes were flat, with a strange pin-prick of light which Charlotte, with sinking heart, was aware boded no good.

He frowned as his son and daughter entered together for they, and his other sons, knew the routine that attended a punishment. One at a time, boys first, in order of age, and lastly Charlotte who, as the eldest, was considered to be the ringleader in any wrongdoing or if not the ringleader should have put a stop to whatever it was before it began. She was expected to listen to the woeful cries of her siblings before submitting to her own chastisement.

‘What is the meaning of this?’ her father asked politely, as though questioning her on some trivial incident that should not have occurred. ‘You know I will see you after Robert. And for goodness sake, stop blubbering, Robert. What a cry-baby it is.’

‘Father,’ Charlotte quavered, ‘would you allow me to remain with Robbie . . . Robert . . . during his . . . his . . .’ She wanted to say his ‘beating’, which was what it was, but her father was already irritated by her behaviour and that word would only make it worse. ‘He is so frightened, and really, he took no part in the . . .’ She paused nervously.

‘Yes?’ Her father’s voice was silky but menacing.

‘He just happened to be there when the boys – after all that’s what they are, no more than boys, and climbing on to the roof of the . . . well, it’s a boy’s trick, isn’t it and—’

‘Are you questioning my judgement, Charlotte?’

‘That is enough. Not another word. Now I would be obliged if you would leave the room and wait in the passage.’

‘I will attend to Robert, if you please. Now leave us. I will deal with you later.’

Charlotte’s heart plummeted as she pried Robbie’s hand from her skirt. She looked down into the tear-streaked, woebegone face of her little brother. The child was ashen and Charlotte felt that streak of stubbornness, which she was not aware she had inherited from her father, spring up within her. A storm of resentment against the unfairness of what her father was to do. Well, perhaps not a storm for no one stormed against Father, but a surge that she subdued, since it did no good. Nobody could stand against Father. She could remember her mother who had died when Robert was born which was perhaps why Robbie was as he was. He had never known the comfort and protection of a mother’s love and always appeared to be searching for something he had lacked despite the love she and Kizzie lavished on him. Jean Drummond had been a gentle little woman who had, like them all, been intimidated by Arthur Drummond and who, it seemed, had made no fight to stay alive after the birth of her sixth child. Charlotte had been ten years old and quite devastated by her death, as had the three older boys, Henry and William and John, but at the same time the tragedy had been somewhat alleviated by the arrival of Kizzie, who was to help the nanny in charge of the new baby. Without Kizzie Charlotte often wondered how they would have survived. Not that they were in any sort of danger but she had filled a void left by their mother; was always there when she was most needed – as now – and in fact was considered by Robbie, who had never known his own mother, to be her! She was a bulwark behind which they might hide, a shield to guard them, though she had no power to stand between them and their father.
She was just there!

Charlotte stood in the passage, her hands to her ears, doing her best to shut out the sounds of the swish of the cane and her brother’s distress. Six of them, which was moderate in view of the twelve the older boys had received.

Like James, he ran past her and scuttled up the stairs and Charlotte waited for the call from her father. It was her turn now!

‘Come in, Charlotte,’ he said pleasantly. That was the trouble, he was always pleasant. Sometimes she almost wished he would rant and rave, show a flash of human temper, but then he surely must know that his children’s naughtiness was really only high spirits, which they indulged in when he was not there and certainly not enough to merit his rage.

‘Now then, Charlotte, perhaps you would be good enough to explain your recent show of defiance. You know it is my belief that children should be punished for any wrongdoing and to climb on the roof of the conservatory where they could not only have fallen through the glass and seriously injured themselves, but also damaged the building and the rare plants it contains shows a considerable lack of judgement and you, as the eldest, should have restrained them. One of the gardeners could have brought a ladder and climbed up to retrieve the ball and I would have thought you had the sense to see it. Do you understand?’ He paused and hit his boot with the switch and Charlotte realised that he could not wait to begin but she could not help herself from speaking out.