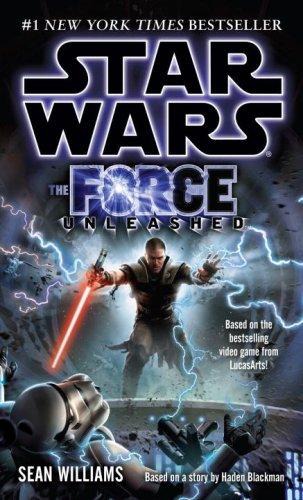 He'd had no warning that a moment of such significance was approaching. During his

nightly meditations, kneeling on the metal floor of his chamber while construction

droids built the Executor, unaware of his existence, he had seen no visions in the

pure, angry red of the lightsaber that he held like a burning brand in front of his

eyes. Although he had stared until the world vanished and the dark side flowed

through him in a bloody tide, the future had remained closed.

Nothing, therefore, prepared him for the sudden deviation from the day's punishing

and unpredictable exercises. His Master was not a patient teacher; neither was he a

talkative one. He preferred action to debate, just as he preferred recrimination to

reward. Never once in all the days they had sparred together, with lightsaber,

telekinesis, or suggestion, had the Dark Lord offered a single word of

encouragement. And that was as it should be, he knew. A teacher's job was not to

drag a student along a single, well worn path. Rather it was to let the student

forge his or her own way through the forest, intervening only when the student was

hopelessly lost and needed to be corrected.

Even on the Wrong paths, he knew, lay some wisdom. What didn't kill him only made

him more powerful in the dark side.

And there had been many, many times he had thought he might die...

Breathing heavily after a punishing round of blows, lightsaber lowered in

submission, he knelt before his Master and prepared for the killing strike. He could

feel the wrath radiating from the Dark Lord like heat-a visceral, angry heat that

brought out his skin in gooseflesh. For a moment that seemed to stretch for years,

all he could hear was the regular, implacable respiration that kept the man inside

"You were weak when I found you." The voice seemed to come from the far end of a

long, deep tunnel. "You should never have survived my training."

He closed his eyes. He had heard these words before. They were the closest thing to

a bedtime story he'd had as a child. The moral he had taken from them was burned

Behind his eyelids he pictured again the clean, cleansing heat of the lightsaber. He

had brushed his skin against it many times, defying the pain, and taken numerous

small wounds while dueling with his Master. He imagined that he knew what the blade

would feel like when it struck him down. Part of him longed for it.

The lightsaber drifted so close to his neck that he could smell his hair burning.

"But now, your hatred has become your strength."

The lightsaber retreated. With a hiss it deactivated.

"At last, the dark side is your ally."

He didn't dare nod or look up. What was this? Some new ruse to lure him into

His Master's next words made his heart trip a beat. "Rise, my apprentice."

Apprentice. So he had always thought himself, but never before had it been said

aloud! And that strange motion with the lightsaber... Could he possibly have just

His lightsaber retracted. It was all he could do to balance on knees that felt

suddenly made of rubber. The black shape looming over him was unreadable, limned

right. Metal, angular, and functional, the space around them was as familiar to him

as the scars on the back of his hand, but suddenly, disconcertingly, everything

The apprentice kept his eyes up and his voice level.

"What is your will, my Master?"

"You have defeated many of my rivals. Your training is nearly complete. It is time

A roll call of past missions sped through the apprentice's mind. Lord Vader had

instructed him to dispatch numerous enemies within the Empire down the years: spies

and thieves, mainly, with the occasional high-ranking traitor as well. He felt only

satisfaction at having fulfilled his duty. His victims had brought their fates upon

themselves, these vermin that gnawed at the footings of the Empire's magnificent

But this was different. He could sense it in more than his Master's words. Darth

Force. There could be only one foe he was worthy to fight now.

"Your spies have located a Jedi?"

"Yes. General Rahm Kota." The name meant nothing to the apprentice: just one of many

in an archive of unconfirmed Jedi kills. "He is attacking a critical shipyard above

Nar Shaddaa. You will destroy him and bring me his lightsaber."

Excitement filled the apprentice. He had trained and hoped for this moment as long

as he could remember. At last it had come. He could never truly call himself a Sith

until he had taken the life of one of his Master's traditional enemies.

stopped him. "The Emperor cannot discover you."

"Leave no witnesses. Kill everyone aboard, Imperials and insurgents alike."

The lightsaber hanging back at his hip was a comforting, reassuring weight. "No, my

lord," he said, back straight and voice firm.

Darth Vader turned away and gripped his hands behind his back. The red sun painted

his helmet with lava highlights.

Master's secret chambers. They were sparse, functional spaces, consisting of a

meditation chamber, a droid workshop, sleeping quarters large enough for one, and a

hangar deck. All were on a concealed level of Darth Vader's flagship, a space long

since written out of the floor plans; it would go unnoticed by the future crew.

The emperor cannot discover you.

Excited though he was by the thought of hunting Jedi, the reminder of the goal his

Master allowed him to share was instantly sobering. All his life he had been trained

to turn fear into anger, and anger into power. It was no different, he realized, for

Darth Vader. Where else could Lord Vader look for increased power than to the

Emperor himself? People were either predators or prey. That was one of the most

basic rules of life. Together, Darth Vader and his apprentice would ensure that

their joint power only increased.

But first he had to survive an encounter with a Jedi. That his Master had found one

at liberty was unsurprising. A handful were suspected to have survived the Great

Jedi Purge, and none was more adept at finding them than Darth Vader. The dark side

infiltrated every corner of the galaxy; nothing could remain hidden from it forever.

Perhaps one day, the apprentice thought, he, too, could seek out his enemies by

their thoughts and feelings alone, but like the visions of the future that were

closed to him, that ability remained elusive. He had never met a Jedi. Their natures

were mysterious to him.

Their history, however, was not. His Master set no lesson plans or written

examinations, but Darth Vader did give him access to records surviving from the

privilege. The apprentice had devoted himself to the study, understanding that

knowledge of his enemy might mean the difference one day between life and death.

The name still brought forth no details of combat styles, character, or last

sightings from his memory. He would access the records when he reached the Rogue

Shadow. There would be time to research on the journey to Nar Shaddaa. If he dug

deeply enough, he might find some small detail that would give him an edge when he

most needed one. That was the only preparation he required.

Entering the hangar bay, he wound his way through the familiar maze of crates,

weapons racks, and starfighter parts. The ambient lighting was dim, with shadows

pooling in every corner. The air tasted of metal and ozone-a sharp stink that had by

now become very familiar. For some, the underbelly of a Star Destroyer might have

seemed a strange place to grow up, but for him it was a comfort to be surrounded by

such unambiguous symbols of technological and political power. Ships like these had

patrolled the trade lanes of the galaxy for years. They had put down insurrections

and quashed resistance around hundreds of worlds. Where else would a Sith apprentice

Kill everyone aboard, Imperials and insurgents alike. Leave no witnesses.

Even as he mulled over this new development, a familiar snap-hiss sounded to his

Instantly in a fighting crouch, the apprentice brought his own blade up to block the

He and his adversary held the pose for a bare second, light-sabers locked across

their chests. The apprentice quickly sized up the being who had attacked him. Human

male, fair-haired and bearded, with calm, serious eyes and a firm set to his jaw.

Archives-would have recognized him immediately.

Jedi Master Obi-Wan Kenobi, High General of the Galactic Republic and master of the

Soresu form of lightsaber combat, slid his deadly blade down and to the right,

ducking at the same time to avoid the inevitable countersweep. Sparks flew as the

stack of crates. He reached out with his cupped left hand and swept a metal tool kit

across the hangar bay, toward his opponent's head. Kenobi ducked and leapt up after

him, deflecting a flurry of blows that would have left an ordinary man in pieces,

then responding with a sweep of his own that sent the apprentice dodging backward,

jumping from one stack to another in temporary retreat.

So the duel proceeded for almost a minute, with Kenobi and the apprentice dancing

like acrobatic Gados from stack to stack, lightsabers spinning and clashing, racks

other. The racket was enormous, and the threat very real. Kenobi slashed a new rip

arm off at the elbow had he not moved in time. Twice he felt rather than saw the

Jedi's blade sweep over his head.

The apprentice wasn't afraid of dying. His only fear was of failing his Master, and

that fear he put to good use. The dark side ruined through him, made him strong and

resilient. He felt more powerful than he ever had before.

to finish the job.

At the sound of an unfamiliar energy weapon activating nearby, Juno Eclipse looked

up from her work and reached for the blaster pistol at her side. She had just about

finished sealing up the hull of the Rogue Shadow, and her thoughts had already