The Forgotten Rebels of Eureka 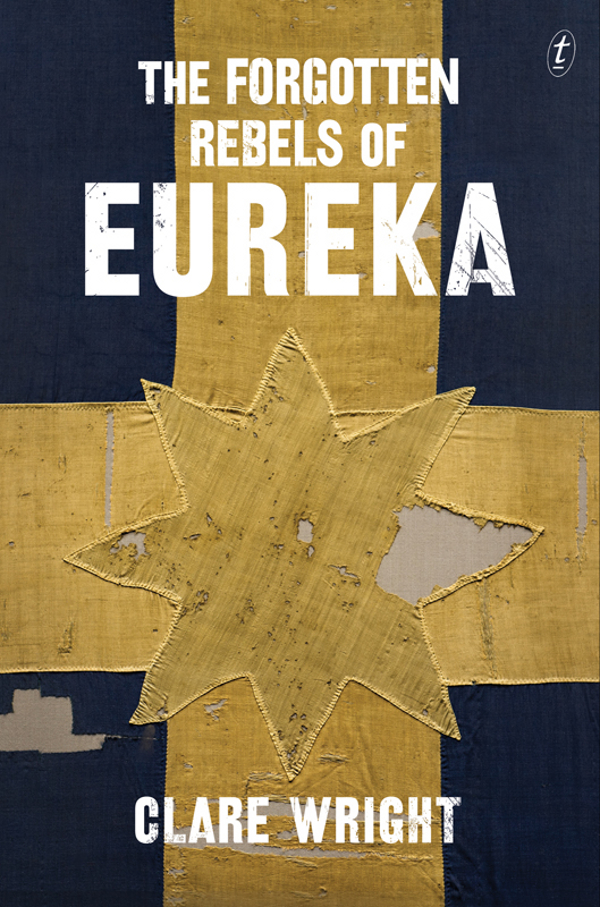 Praise for
The Forgotten Rebels of Eureka

âImmediately entrancingâ¦recreates the landscape as one of bustling domesticity, commerce, theatre and constantly shifting authorityâ¦Wright challenges the traditional view of the stockade to create a much richer social history.'
Guardian

âBeautifully written, her book takes readers on a vivid journey of what life was like for the families of the miners, merchants, prostitutes and policeâ¦It's a great story.'
Courier-Mail

âEvokes the goldfields era vividlyâ¦brings to life the experiences of so many young immigrants to Australia in the 1850sâ¦Women, in particular, will enjoy this refreshing new look at Eureka.'
Age

âLively, incisive and timely, Clare Wright's account of the role of women in the Eureka Stockade is an engrossing read. Assembling a tapestry of voices that vividly illuminate the hardscrabble lives endured on Ballarat's muddy goldfields, this excellent book reveals a concealed facet of one of Australia's most famous incidences of colonial rebellionâ¦Comprehensive and full of colour, this book will also be essential reading for devotees of Australian history.'
Books and Publishing

âClare Wright asks a belated question on behalf of her schoolgirl self: “Where are we in this story?” It's a simple but disruptive question that has the power to stir the surface of even the most lacquered of Australia's founding stories.' Robyn Annear,
Monthly

âA huge step towards a more truthful examination of the Stockade and its playersâ¦What this book does is lay down a new wayâ¦for all of us to understand our past through truth rather than reliance on myth.'
King's Tribune

The Forgotten
Rebels of Eureka

The moral right of Clare Wright to be identified as the author of this work has been asserted.

First published in 2013 by The Text Publishing Company

For my children,
Bernard, Noah and Esther

âEvery history of every country is a mirror of

the author's own interests and therefore selective

It was William Withers who first generated the myth of the Australian goldfields as an exclusively masculine domain. In his popular
History of Ballarat
, first published in 1870, Withers made arresting statements like this: the diggers were
young and wifeless for the most part
, to see a woman
was an absolute phenomenon
, the diggings were
womanless fields
. But Withers' unequivocal descriptions referred to the earliest days of the gold rush, that is, late 1851 and early 1852. It is a historical nicety conveniently overlooked by subsequent historians, eager to romanticise the digging life as one of unparalleled freedom and independence.

Such writersâthere are many but we can finger Henry Lawson and practically anyone else coming out of the
Bulletin
and
Lone Hand
school of radical nationalismâsought to contrast the humdrum existence of their staid metropolitan lives with the bravery, adventurousness and risk-taking of the pioneers, symbolised by the classless (and womanless) diggers. In a lecture to the Australian Natives Association in 1889, John Francis Deegan, who had arrived at Ballarat as a nine-year-old boy in 1854, spoke of the diggers as bearing
a free and manly gait, and an aspect of self-reliance, begotten of their untrammelled life and independent habits
.
1
It was a muscular heritage that the inhabitants of an imperial metropolis on the verge of a depression longed to claim.

But is it still socially relevant to maintain the false premise of masculine independence and autonomy, particularly when the voices of women who were actually there can readily drown out the likes of Withers? A mature nation, surely, can continually resift, reconsider and reflect upon the implications of its creation stories.

There is a great body of international literature demonstrating the prevalence of women at the forefront of agitation for social and political change: in the American Revolution, the American Civil War, the French Revolution, the 1848 uprisings across Europe, the Spanish Civil War, the Russian Revolution and recent Latin American protest movements. Such works have charted the ways that traditional bounds of female and civic identity are transformed in times of upheaval and conflict.

Eureka, by contrast, has dovetailed with other Australian legends (Gallipoli, the bush, the 1890s shearers' and maritime strikes) with supposedly all-male casts and symbols of national potency to create an impermeable veneer of masculine dominion. Geoffrey Blainey was right to conclude that âEureka is like a great neon sign with messages that flick on and off with different messages for different people on different occasions'.
2
Yet the Eureka beacon has never before been used to illuminate issues of gender bias in our collective bedtime stories.

By examining the lives of women on both sides of the Stockade, we can begin to build an intricate portrait of the Ballarat goldfields in 1854. Instead of a rough and ready outpost of bachelors out for a quick buck, we find a heterogeneous and largely orderly community of âworking families' intent on building a new life of freedom and independence. Ultimately, as we'll see, it was the intimate, ambitious matrix of expectations, associations, disappointments and frustrations that culminated in the brief but bloody moment that aired miners' grievances and elicited official reprisals. Women's presence does not just add colour to the picture; it changes its very outline.