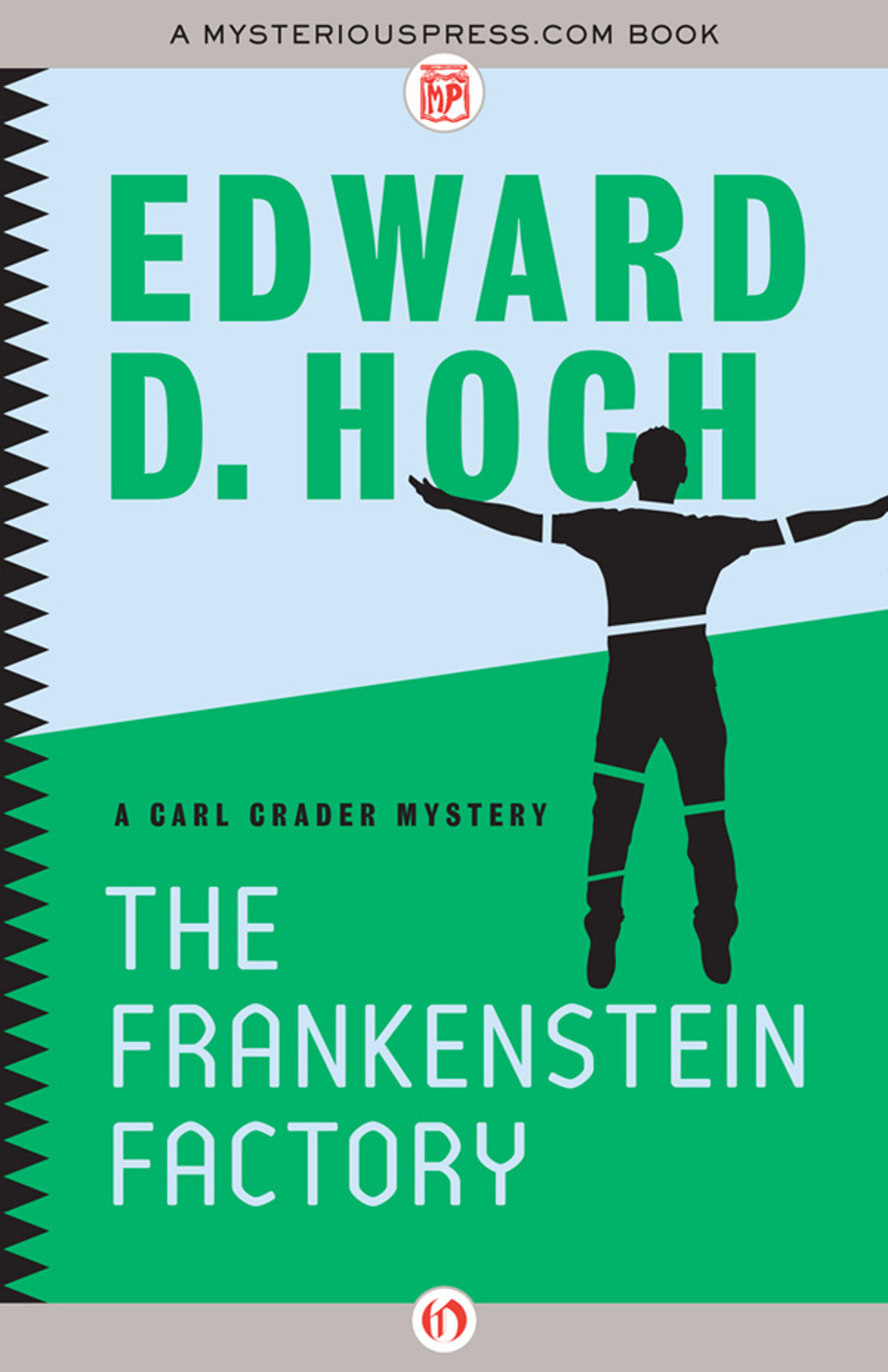 S
EEN THROUGH THE MISTS
rising from the Gulf of California on that first morning, Horseshoe Island looked to Earl Jazine like nothing so much as a slightly fuzzy hologram of Dracula’s castle or the island where they found King Kong. He’d expected something barren and sandy, like the rest of Baja California, with perhaps a few cactus trees to break the starkness of the landscape.

But the island he saw, growing nearer every moment as his hovercraft approached, could well have been located in the sea off central Africa, or near the mouth of the Amazon jungle. There was a lushness of vegetation and a moistness of air that seemed completely foreign to the locale. He took it all in for another few moments, to be certain that it wasn’t merely a trick of the mist, and then leaned forward to tap the Mexican skipper of the hovercraft on the shoulder.

“Am I seeing clearly? All those plants and trees!”

“They have big machines,” the Mexican explained with a wave of his hand. “They do it with their machines. These professors—you know?” His gesture implied that they might be able to do anything, and whatever they did he would accept on faith. Perhaps that was the right attitude for a man whose grandfather might have driven mules through the mountains of Sierra Madre, a man who now found himself piloting a hovercraft ferry through the placid waters of the Gulf of California in these early years of the twenty-first century.

Earl Jazine had boarded the craft at Guaymas for the trip across, rising before six so that he could be welcomed by Dr. Hobbes for breakfast. Though he’d compromised by having a cup of coffee and a vitamin wafer at the hotel before departure, his stomach now was beginning to gnaw with hunger. Back in New York he always ate a big breakfast, frequently skipping lunch, and he was not used to the change of habit. The pills one took to compensate for jet lag were no help to his stomach either.

“How many people live over here?” Earl asked the skipper.

“Half dozen or so. They have a cook, Hilda. She cook for half dozen.”

They’d reached the shoreline of the island now, and the hovercraft glided gently over the water and onto the flat, sandy beach. A stocky man with white hair came out of a boathouse to greet them. He walked with a slight limp across the uneven sand and Earl knew at once that this was Dr. Lawrence Hobbes himself. The description and photos he’d studied back in New York were quite accurate.

He hopped down to the sandy beach and held out his hand. “I’m Earl Jazine.”

The white-haired man grunted. “Lawrence Hobbes here.” He spoke with just a trace of British accent—again, something Earl had been prepared for. “Glad you could come. Hilda is serving breakfast. You’re just in time.”

While the hovercraft backed off the beach and departed, Earl followed him across the beach to a paved walkway that led through the trees to the barely glimpsed house beyond.

“I can’t believe all this vegetation,” Earl marveled. “It’s unusual for Baja California.”

“I suppose it is,” Hobbes conceded, as if he’d never considered the matter before. “The machinery needed to keep the freezing plant functioning gives us certain beneficial side effects. In a sense we make our own weather. A few years back I looked into the possibility of weather control for cities using a similar apparatus. But of course the cost over such a large area would be prohibitive.” He glanced down at the single suitcase Earl carried. “Do you have all your gear in that little bag?”

“Everything’s miniaturized these days—especially photographic equipment. I suppose it’s the same in your business.”

Hobbes nodded. “They make it smaller and raise the price.”

As they passed the last of the sheltering trees the house came fully into view for the first time. It was a low, two-story structure of pale yellow stucco that sprawled for some distance in either direction. The paved walk had brought them directly to the front door, so Earl was unable to estimate the full size of the place. “It looks big.”

“Twenty rooms above ground, with the vaults and machinery below. It satisfies our needs.”

“Do you need a maintenance staff?”

“Hilda cooks and makes the beds. Of course the dust is removed electronically and there’s very little other upkeep. Sometimes I putter about on the grounds myself.”

“About three hundred acres. Not large as islands go, but sufficient for our needs.”

“And I understand this is owned by the institute?”

“Correct. Before I bought it, they say, it was a way station on the marijuana route from the producing areas to Tijuana.”

The interior of the large stucco house had much the same quality of sterile efficiency as the outside. Just as the turretlike appendages to the building’s roof had turned out to be television and microwave equipment (thereby dispelling Earl’s image of Dracula’s castle), so too a wonderfully detailed mobile that hung in the entrance hall proved on closer inspection to be a sophisticated type of proximity alarm system.

“We have these throughout the house,” Lawrence Hobbes explained. “It will detect any unusual heat or light or odor. At night it will also detect movement, of course, though we’re not usually bothered by burglars out here.”

“Is the hovercraft the only mode of transportation?”

“Oh, I have a cabin cruiser in the boathouse for emergencies, but we rarely use it. The hovercraft brings supplies and rare visitors.”

“You said not
usually
bothered by burglars.”

“There was one last year. He probably heard there were doctors out here and expected to find some illegal narcotics.”

“What happened to him?”

Hobbes turned his face toward the window, squinting into the morning sun, which had finally broken through the mist. “He died. I killed him with a laser gun.”

“I thought those things were illegal.”

He merely smiled at that. “Here on Horseshoe Island, Mr. Jazine, nothing is illegal unless I say it is.”

They went into a dining room at the end of the hall. If Earl had been expecting to meet the others at breakfast he was disappointed. The table was set only for three and the room was empty.

“Will we be starting work soon?” Earl asked, choosing the chair nearest the door.

“The operation is tonight. You’ll meet the others after breakfast.” He indicated the vacant chair. “Only Miss Emily joins me for breakfast. It’s the only meal she takes with me. She’ll be along presently.”

A swinging door opened and a dark Mexican woman entered with a pitcher of orange juice and plates of bacon and eggs. She nodded to Earl but didn’t speak. “This is our cook, Hilda,” Hobbes said. “She’s deaf and dumb, but a good worker nevertheless.”

Hilda hovered for a moment, apparently reading his lips, and then departed. Earl wondered why the only servant Hobbes employed should be deaf and dumb. Did he have that much to hide out here on this little island in the middle of nowhere?

After a few minutes they were joined by an older woman who walked with a cane. Earl stood up to be introduced. “Ah, my dear—you’re up early as usual! This is Earl Jazine, from New York. Earl, let me introduce Miss Emily Watson.”

He guessed her age at around seventy, though the wrinkles on her face were deep and her hand was unsteady. She was about Hilda’s size, and her white hair might once have been dark. There was still a hint of youth in her frank eyes. “A pleasure, Mr. Jazine. How are things back in New York? We read so much about the plans for the searail!” Her accent was very British, more so than Hobbes’s, and her voice reminded Earl of a woman writer he knew back East. He was in love with that voice and could listen to it by the hour.

“New York is always planning something, Miss Watson,” he said. Hobbes served her breakfast from the plates himself, and Earl realized that Hilda hadn’t returned. Perhaps she and Miss Watson didn’t get on that well together.

“Earl will be filming and recording tonight’s operation,” Hobbes explained, sipping his orange juice. “If it is a success we’ll need a record.”

“And if it is a failure?” the old woman asked.

“Emily, Emily—the days of failure are passed! Haven’t I told you that?”

“You’ve told me many things during these months, Lawrence. I only trust they’re not a foolish attempt to gain my money.”

“How can you—?” he began, but his words were quickly interrupted by a flashing red light and pulsating buzzer located near the room’s ceiling. “Something’s wrong downstairs,” he said, leaping to his feet. “Follow me, Jazine!”

He went through the swinging doors, with Earl close behind. They led not to the kitchen area, as Earl had supposed, but to a corridor that seemed to run along the back of the house. A circular metal staircase provided access to the lower level, and Hobbes went down it with a speed that seemed to belie his age and his limp. Unfamiliar with the dimly lit steps, Earl had trouble following.

Once below the main floor, he found himself in a whole new world. Here, eternally shut off from the sunlight above, the rooms glowed with subdued fluorescent ceilings. The metal doors reminded Earl of a ship’s bulkheads, and lines of colored pipes along the walls contributed to the overall effect of industrialization.

But he had only the briefest opportunity to observe all this as he followed Hobbes through an electrically controlled door into a vast operating amphitheater. The room itself, and the suddenness of it, staggered his senses momentarily. It was at least two stories high, and extended down from the spot where Earl stood just inside the door. Seats for perhaps fifty persons were arranged in a semicircle that focused down upon the stainless steel operating table. Around the table was grouped supporting equipment of the most advanced design, much of it new even to Jazine’s educated eye.

But just then the center of attention was elsewhere. A young man in bathing trunks and a young woman in a short terrycloth robe were standing near the operating table, looking for all the world like little children caught in the jam jar.

“What is this?” Hobbes thundered, hurrying down the steps to confront them. “What’s the meaning of this unauthorized visit?”

“We were swimming around at the back beach,” the young man answered, “and Vera wanted to see the operating room. You can’t blame us, since we’re going to be working here tonight.”

Lawrence Hobbes sighed in frustration. He turned to Earl and said, “This is Tony Cooper, our bone specialist, and Vera Morgan, our research chemist. They only arrived yesterday, and perhaps I was tardy in showing them about.” He swung back to Cooper and Miss Morgan with renewed testiness. “But you shouldn’t have entered here without authorization! You set off my alarm system and gave me quite a start!”