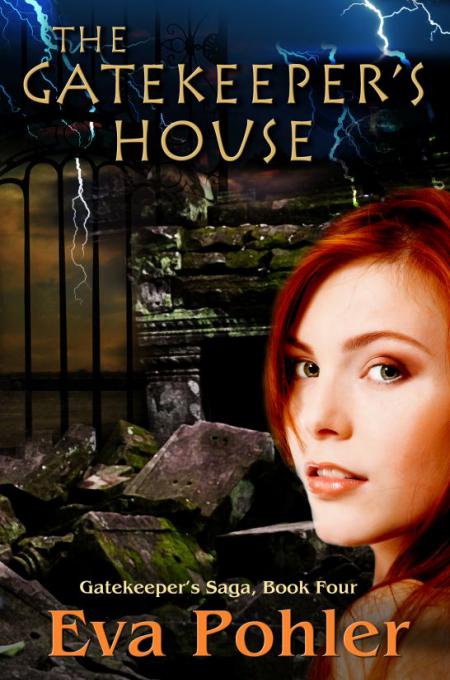 Published by Green Press at
Smashwords

This
ebook is licensed for your personal enjoyment only. This ebook may
not be re-sold or given away to other people. If you would like to
share this book with another person, please purchase an additional
copy for each recipient. If you’re reading this book and did not
purchase it, or it was not purchased for your use only, then please
return to Smashwords.com and purchase your own copy. Thank you for
respecting the hard work of this author.

Chapter One: Under
Attack

Therese stood in the doorway, twirling
a strand of her red hair round and round her index finger. There
was only one bed in the center of Hecate’s room. That could be a
problem, even though Therese only slept about once a
week.

“
Maybe this wasn’t such a
good idea.” Therese took a step back, knocking her quiver and bow
against the cold stone wall.

“
It will be fine.” Hecate
skipped forward and snatched up Therese’s bag. “You can unpack your
things in my closet.” When she spun around toward the back of the
room, her black and white hair fanned out around her slim
shoulders.

Hecate didn’t look like a witch or a
hag or the dozens of other descriptions Therese had found on Google
while visiting her family and friends in Colorado a month ago. She
was an inch taller than Therese, and, in spite of the white streaks
in her hair, she looked young, closer to Hermes’s age,
mid-twenties, with a delicate nose and thin lips. Therese knew
Hecate was ancient—older than Than—but one thing she’d learned
since becoming the goddess of animal companions was that immortal
beings aged at different rates from humans and from one
another.

“
You aren’t what I was
expecting,” Therese said with a smile.

“
Mortals get me confused
with Than’s sister, Melinoe. That’s probably it. Were you expecting
someone more terrifying?”

Therese pulled her eyebrows together in
confusion. “Do you mean Megaera?”

Hecate’s face broke into a grin. “Those
two are nothing alike.” Then, in a somber voice, Hecate added, “I’m
not surprised Than never mentioned Melinoe.”

“
Well that makes one of us,”
Therese said. How could he omit such an important detail? She’d
told Than everything about herself and her family. Why wouldn’t he
have ever mentioned Melinoe? “Does she live down here,
too?”

“
She used to, until Hades
banished her a few centuries ago. Now she lives on the outskirts of
the Underworld in a cave on Cape Matapan.”

“
On the southernmost tip of
Greece.” Hecate stepped forward. “Where are my manners? Meg will
scold me later. Please come on inside. It’s so nice to have
company. I get lonely here when Persie moves in with Hades.” Hecate
slipped Therese’s bag behind a wooden door, as though she wished to
give Therese no opportunity to change her mind. “In the springs and
summers on Mount Olympus, Persie and I share rooms with Demeter.
Down here, I have a lot of time to myself.”

Therese looked around the chamber for
the first time, its dome ceiling high and covered with dancing
shadows, cast by the light of the Phlegethon, the river of fire. A
stream ran from an upper crevice down a series of rocks and pooled
in a six-foot-wide basin before thinning and disappearing behind
another smooth boulder.

“
That’s where I wash,”
Hecate explained. “The spring is fresh and good enough to
drink.”

Beside the basin and curled on a pillow
was a small animal, a cute brown fur ball Therese had never seen.
“Who’s this?”

“
Galin, my polecat. This is
the time when she likes to sleep.”

“
My dog is awake and around
here somewhere.” Hecate glanced about the room. “Cubie? Where are
you?”

A black Doberman pinscher with tall
ears and a long tail crawled out from beneath the one big
bed.

“
There she is.” Hecate
reached over and patted the dog on the head. “Were you spying on
us?”

Hecate laughed. “Cubie, this is
Therese.”

“
Likewise.” Therese stroked
Cubie’s back, wishing Clifford had taken her seriously when she’d
announced that she was moving out of Than’s rooms. Instead, he’d
given her an unconcerned stare as she had said
goodbye
and
I
mean it this time
. “I have a dog, too.
Maybe you would like to meet him.”

“
Is he intelligent?” Cubie
asked.

“
He’s pretty smart.” As the
goddess of animal companions, Therese had met quite a lot of dogs,
and she felt positive that Clifford was as smart as any of
them.

“
But probably not as smart
as Cubie,” Hecate said. “She was once the Queen of
Troy.”

Before Therese could ask why
a former Queen of Troy was now a dog, the floor trembled beneath
their feet, followed by a loud
boom
.

Therese clutched the wall as Hecate
fell back on the bed and shouted, “Ahhh!”

“
What was that?” Therese
asked when the floor stabilized.

“
I don’t know.” Hecate’s
voice was frantic. “I can’t get a prayer through to Hades or to
Persie.”

Therese tried, too, but sensed no
response. Blood pounded in her head as the ground began to quake
again. She clutched the locket at her throat and prayed to Athena,
but got no answer.

“
Will these walls hold?” She
glanced up at the ceiling, a host of scenarios playing through her
mind. If the walls of the Underworld were to crumble, what would
happen to its billions of inhabitants, including the souls of her
mom and dad?

“
Where are they—Hades and
Persephone?” Therese asked.

Hecate winced as
another
boom
sounded throughout the chamber. “Mount Olympus.”

Just then, a crack ran across the
ground, up the wall, and through the dome ceiling.

Small chunks of the ceiling fell on the
bed, on the golden table by the hearth, and in the water basin,
causing Galin to leap from her pillow and into Hecate’s
arms.

“
Clifford and Jewels!”
Therese cried. “They’re in Than’s rooms.” Her stomach balled into a
knot when she imagined them harmed.

“
I’ll go with you.” Hecate
set Galin down on the bed and spoke to the shivering weasel. “You
and Cubie go to Demeter’s winter cabin, and wait for me there.
Okay?”

More rocks crumbled down the
walls as a series of
booms
sounded throughout the chamber. The stream, which
once ran gently down the wall, shot out, spraying in all
directions.

“
I’m not leaving you!” Galin
returned to her mistress’s arms.

Soaked and trembling, the
four of them rushed down the winding path along the Phlegethon,
dodging the falling rocks. Cracks chased them all across the walls,
and loud
booms
shuddered through the air. Therese was afraid to pray to Than,
worried he’d god travel straight into danger. Even in her limited
experience, she knew that if you arrived at a point occupied by
solid mass, such as a large boulder, your body composition would
momentarily meld with it. She’d discovered this problem when she
once arrived in a brick wall. It had taken over an hour to recover,
and the pain had been excruciating.

She found Clifford barking nervously by
the hearth. “Come on, boy! We’ve got to get Stormy!”

Therese carried Jewels like a football
in the crook of one arm as the group scurried down the narrow
passageways toward the stables. She wondered if Than would be angry
with her for not calling to him right away. He was already angry
with her, and she didn’t want to put another rift between
them.

As they passed by the intersection of
the Lethe and the Styx, deities cried out, and, although Therese
and Hecate slowed down and searched the waters, they could not find
the source of the cries. Cubie said she’d stay behind and keep
searching.

When Therese rounded a corner, a colony
of bats whirred up from a crevice below and fluttered past them,
and then out climbed Tizzie, up from Tartarus with blood dripping
down one arm.

“
What is happening?” Tizzie
demanded, her black serpentine curls covered in dust.

“
Well that’s just great,”
Tizzie said, waving her hands. “The souls are in chaos. And if the
pit ruptures, the Titans will be unleashed. Where the devil is my
father?”

“
Mount Olympus,” Hecate
said, dodging a falling rock that landed with a clack beside
her.

Sensing Stormy’s danger, Therese sent a
prayer to Tizzie as she hustled toward the stables, explaining why
she was on the run instead of god traveling to the gate.

The three judges floated by her in
their long robes headed in the opposite direction, toward the gate.
Perhaps their demigod status kept them from god travel, she
thought. Hecate was no longer behind her as Therese reached the
stables with Clifford and Jewels. When she opened the wooden door,
she found the walls had completely collapsed, and Stormy lay on his
side crushed beneath the rubble with blood pouring from his
flanks.

Among the weeping women and
children, Than pulled the soul of the Chinese man from the limp
body on the bed. As sorry as he felt for those left behind, Than’s
own troubles distracted him beyond measure. He tried to put the
doubts out of his mind, but with no success. They appeared, against
his will:
Therese had used him so she could
become a god. She had never loved him as he loved her. The death of
her parents, and so many after, had motivated her to find a way
around her own mortality.

He ushered the soul across the heavens
and then down through the deep chasm, where hundreds of his
disintegrated selves led other souls from different parts of the
world. Like a great machine—the greatest conveyor belt
imaginable—he swept along, an automatic cog in the wheel of life.
And there below him on his raft, long pole in hand, was his fellow
cog, Charon, ready to carry the souls to their judgment.

For centuries, he’d done this same
work, longing for a change, and now that he’d finally found his
wish, he was only more miserable.

Therese never meant to marry him. He’d
been a fool.

In the weeks since she moved in, her
eighteenth birthday and their wedding date had come and gone.
Therese had said she wasn’t ready, postponing their marriage
indefinitely. When he asked her why, she had repeated, “I’m not
ready.”

Than was a patient god.
Although disappointed, he could wait for as many years as Therese
needed. But it wasn’t her
spoken
objection that had his stomach in knots and his
emotions unstable; it was the physical distance she put between
them of late that made him shiver and regret the day he’d met
her.

How could the same touch of his hands
on her that had once made her smile and cling to him cause her to
avert her eyes and pull away? If she once loved him, it was clear
she did no longer.

As he neared Charon, he noticed
Cerberus whining, and beside him stood his sister Tizzie. Then he
saw a great explosion beyond the gates, and red and orange sparks
flew through the sky. Rocks tumbled down the walls of the chasm,
like the beginning of an avalanche. In all the centuries Than had
lived in the Underworld, he’d never witnessed anything like this
before.