Read The Gateway Through Which They Came Online

The Gateway Through Which They Came

BOOK: The Gateway Through Which They Came
>>DOWNLOAD HERE >>READ ONLINE NOW
ads 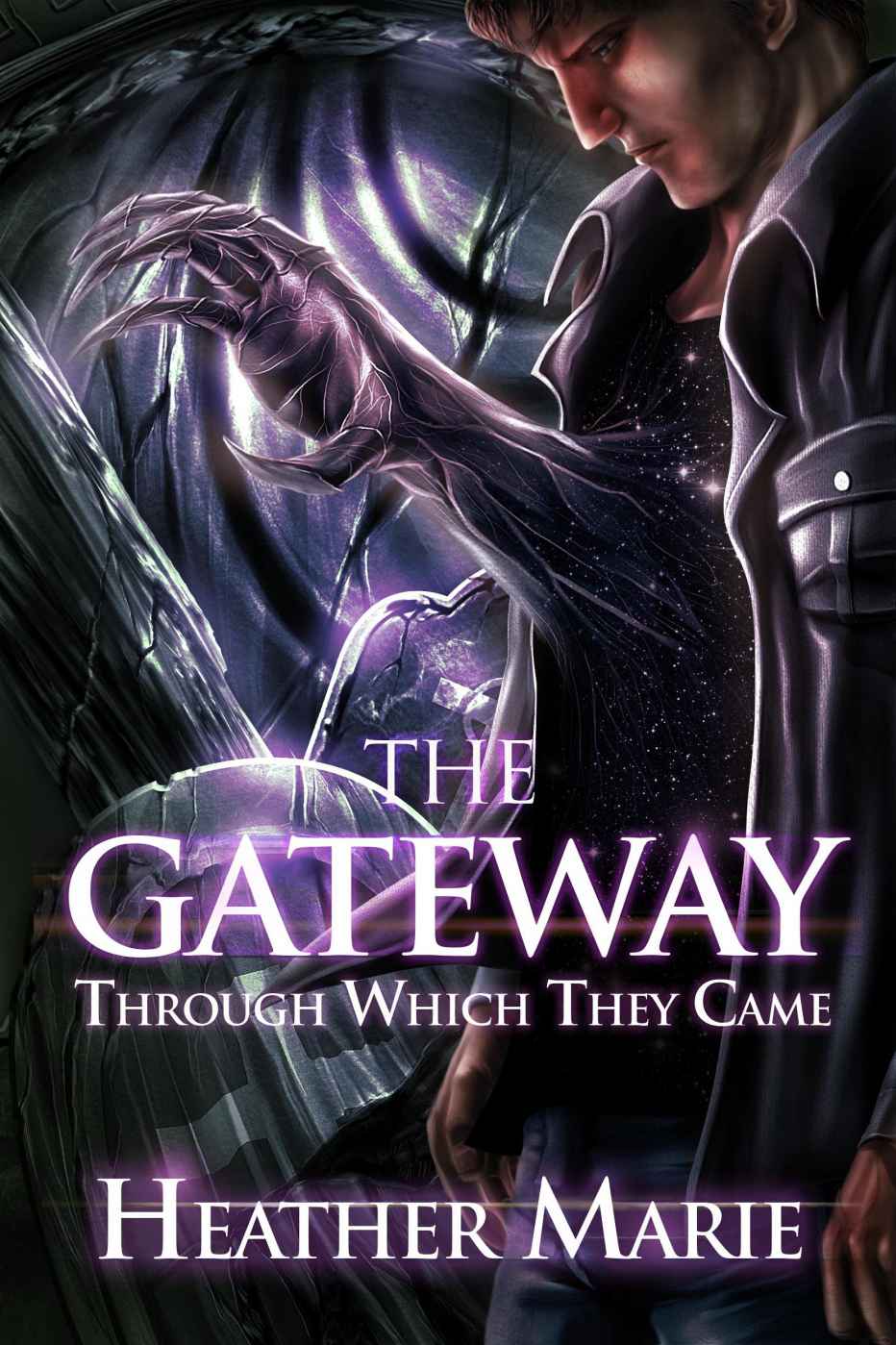 To my parents, Jeff and Angela.
And to my grandmother Virginia––I hope that wherever you are
it is paved with gold, just as you dreamed it would be.

ot five minutes after busting my gut on the track, I spot a dead kid standing next to my car. Just waiting for me, like they always do. I try to groan but I’m still too out of breath to bother. How do I know he’s dead? If you don’t count the crimson smile across his neck (a deadly blow most likely inflicted by the finest of blades) and the flat pastiness of his brown skin, you wouldn’t know the difference. But I’ve done this long enough to familiarize myself with
them
.

It’s not the nicest of names, but it about sums them up.

Dead people—or ghosts, if that makes you feel better. Unfortunate souls that have found themselves departed from the living. They’re not always as gory as this dude, but majority of them are. Sometimes they’re just normal people dying of natural causes. I prefer the natural over the gore, to be honest.

It takes a moment for me to notice the kid, because my mind is still processing the encounter I had this afternoon in the school office. Linda, the woman who handles attendance, is damn close to filing a complaint against me, I’m sure. First thing she does each time I walk through the door is let out the loudest sigh.

“I still don’t have anything for you, Aiden,” she’d said earlier that day, for the dozenth time.

“It’s been six months, Linda. How could there be nothing? Look, I’m only asking for, like, a small hint.”

She typed away on her computer, unimpressed. “It’s against school regulations for me to release personal information on any student. Especially to another member of the student body.” Linda said this last part with a quick death stare in my direction, before going back to her computer screen. “I’ve told you. If you keep doing this, I’m gonna have to tell Father Williams.”

I leaned against the doorframe, my head tilted in that desperate way puppies use, hoping just maybe she’d take an ounce of pity on me.

Linda stopped what she was doing and faced me. “I’ve said it before, and I’ll say it again, Koren Banks and her family have taken a leave of absence. That’s all I can offer you.”

I pushed myself from the door and leaned over her desk, whispering, “I just want to know that she’s okay.” If the desperation in my voice wasn’t clear enough, I hoped she’d see it on my face.

Linda looked deep in my eyes and said, “I’m not at liberty to say.” But this time, this one single time, she sounded like she wished she could.

And just like that, the anxiety I’ve dealt with for months has tripled.

I know absolutely nothing about Koren’s strange disappearance, but apparently someone does. They just can’t, or won’t, tell me.

After that, I do what always helps me burn off steam. Run. Though it doesn’t do any good when shortly after I clear my head, I find that I’m needed once again. Being a Gateway can be exhausting.

So when I finally take notice of the Bleeder who’s incapable of standing still, already in panic mode, it’s the last thing I want to deal with right now.

“Aw… come on, man. I
just
got off the track. Can’t this wait?” I say this as I half-drag, half-walk my way through the dark school parking lot, backpack hanging off one shoulder.

My yellow VW Bug glows brightly under the lamppost, the light creating a white halo around it like some godly beam shooting straight from the sky. Fitting. Dead kid paces back and forth next to my car, which I find disconcerting. Something’s making him twitch, and if I have to guess, I’d say it’s the reality of finding out he’s dead. That can’t be an easy thing to digest.

“I don’t know why I’m here,” he says as he paces. His hands tap against his legs,
tap taptap tap,
like his nerves have hit full throttle. Not that I blame the kid.
Kid
might be the wrong word, though. He looks about my age, seventeen, maybe a year or so older. Black shirt, blue jeans, white sneakers. Just an everyday guy.

Suddenly my exhaustion means nothing. Here I am, alive, worried about a girl who probably forgot about me the minute she left town. And here’s this guy, dead, trying to figure out where the hell it all went wrong. I could never compare my worst day with his.

“Calm down, okay?” Palms up, I attempt coaxing him to a standstill. His pacing is making
me
anxious.

After another twenty seconds, he collects himself and stops, hugging his arms to his chest.

I’m kind of glad he goes silent. His words are more like a wheezing kid having an asthma attack, the way he sputters them out between breaths. Not to mention the gash in his throat does this disgusting open-gape thing as if it’s another mouth opening and closing along with his.

Dead Kid stands in front of my car, frozen, waiting for me to say something.

Before I can respond, the freezing Portland air whispers by, just enough to cause my sweat-covered skin to prickle with goosebumps. I shake off the chills running up and down my arms, and try to explain.

“Do you know where you are? Where you were before coming here?” I lower my hands to my sides and give him time to ponder this.

“I was with Eric,” he finally says.

“Eric. Okay.” I have no idea who Eric is, but the more I talk, the calmer he seems to get.

He nods. “We were, uh, were running this errand for his brother and… and something happened.”

Again, his wound
wink winks
as he speaks. I don’t know how he’s able to talk with all that damage to his throat, but I have to assume it’s a Bleeder thing.

“Do you, um, do you remember what happened?” I let my backpack slide to the ground. Somehow losing that weight is my way of telling him he has my full attention. I don’t know how. It just is.

He rubs his hands up and down his upper arms, his eyes searching for something beyond. A memory. A glimpse of the nightmare that brought him to this.

“We were making a run for Stephen. Eric’s brother.”

“A drug run,” he clarifies, flicking his eyes downward. “I don’t know what happened. It just… it just went bad.” He stares down at the black asphalt as he speaks. “One minute we were there. No big deal. And the next… some guy reached up behind me and Eric tried to stop him, and I felt—” He stops. “The next thing I know, I’m walking down some road.”

The damn goosebumps come back when he says it. He felt the knife slicing his throat.
Felt
it. I wouldn’t wish that on anyone.

I take him in for a moment, him watching me, me watching him. Normally I’d be distracted by the chomping gash along his throat, with its constant lifting and parting of flesh every time he speaks, but the sympathy I feel for him transcends that. The blood crusting down his neck doesn’t even look real. It could be some kind of makeup, special effects like I’ve seen in movies. But it’s not. And it is. Real, I mean. It’s not uncommon to come across a Bleeder that’s been brutally killed, but that doesn’t mean anyone should be unwavering when presented with such a situation.

I see this guy in front of me, and for a moment, I picture Koren. Sliced throat. Pale skin. Lifeless. It’s a thought that has plagued me since she left. Why can’t I picture her like any normal person? Alive and well. Happy. It’s a sick feeling in my gut that I can’t escape. Koren. Dead.

The kid’s uncomfortable wheezing rocks me back to reality. I need to get it together for his sake.

The Hunter on Arena by Rose Estes
In Another Life by Cardeno C.
The Coming of the Whirlpool by Andrew McGahan
LASHKAR by Mukul Deva
House of Strangers by Forsyth, Anne
Warden by Kevin Hardman
How to Kill Your Boss by Krissy Daniels
Cover of Snow by Jenny Milchman
Glitch by Curtis Hox
1993 - The Blue Afternoon by William Boyd, Prefers to remain anonymous